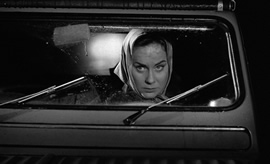 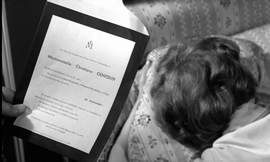 Surrounded by briefly illuminated trees, a car glides through the night under the steady hand of a determined female driver, Louise (Suspiria's Alida Valli), while a dark figure in a fedora and trench coat slumps in the back seat. When they pull up to a reservoir, we see that the passenger is in fact the lifeless body of a young girl, dragged and dispatched into the murky water. Cut to a medical conference where the respected Dr. Génessier (Brasseur) lectures about the benefits of X-ray irradiation in restoring damaged skin. Afterwards he's summoned by the police to identify the same girl's body, recently fished from a river. Génessier identifies the remains as his mysteriously vanished daughter, Christiane, and coldly retreats to prepare for the funeral. With such an opening, audiences at the time had a fair idea of what to expect; a madman or monster is on the loose, preying on young women with an assistant handy to dispose of the bodies. However, this masterpiece from director Georges Franju (Judex) - still the finest French horror film ever made - upends expectations from start to finish. As we soon learn, Christiane (Scob) is in fact alive and still living in her father's secluded estate, where he clinically attempts skin grafts to salvage his daughter's skinless face. Forced to wear an emotionless mask, she wanders the house as a constant reminder of her father's fallability (the injuries were caused by his hand in a car crash) and has only the captive lab dogs as friends. Meanwhile Louise prowls the city streets looking for new girls to provide as subjects, bringing them back to the doctor each time a graft fails. Meanwhile the police become suspicious and decide to send in their own decoy as one of Génessier's patients, but all does not go as planned.

Conceived with beautiful precision sharper than the doctor's scalpel, Eyes without a Face (Les yeux sans visage) marks a vital turning point in the horror genre between gothic imagery (the dark forest around the house, the captive and disfigured daughter, the baying dogs) and modern technological shocks - most obviously the infamous skin graft sequence in which a woman's skin is lifted from her face, still effective after generations of gory thrills. The film also inspired an entire strain of European horror films beginning 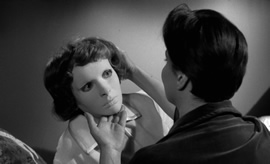 with Jess Franco's The Awful Dr. Orlof in which a doctor tries to restore a loved one's beauty while inflicting pain on others. Unlike its imitators, Eyes without a Face never feels like exploitation; though marketers tried their best to pass it off as gaudy schlock (including a dubbed version entitled The Horror Chamber of Dr. Faustus in the U.S.), the film's chilling poetry keeps it in a class all unto itself. The indelible images of Scob wandering the house in her mask are difficult to forget, while Brasseur and Valli (whose fate still elicits gasps from audiences) offer complex, multi-layered characters well beyond the traditional good and evil dichotomy one might expect. 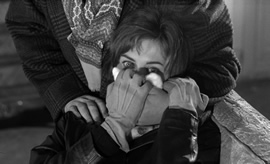 A home video staple, Eyes without a Face was slightly trimmed in most territories outside of France, losing a few seconds from the end of the face removal. It's a trade off as to which version is more effective; though more gruesome, the longer version loses the eerie effectiveness of the scene suddenly fading to black as the empty eye-holes are raised towards the camera. The shorter international edit popped up on VHS in America first from Sinister Cinema (as separate English-dubbed and subtitled tapes), with a laserdisc from Image and a licensed VHS from Interama turning up later with very mild letterboxing.

The uncensored version made its American debut with a theatrical run from Rialto Pictures in 2003, with a Criterion DVD the following year. That disc presents the film in its full, uncensored glory; most surprising at the time was the image quality, light years beyond the soft, scratchy prints used for the film's theatrical reissue. Black levels and detail are magnificent, while the image quality is extremely clean and film-like. Also, the often troublesome white-on-white subtitles are now replaced with much clearer optional English subtitles that improve markedly on past translations. The modest but effective extras offer a solid accompaniment to the film, beginning with Franju's notorious 1949 short documentary, Blood of the Beasts (Le sang des bêtes). A chilling look at Parisian slaughterhouses, the film juxtaposes beautiful monochromatic images of the city and populace with cold, unflinching footage of the meat source that feeds it. A section entitled "Dr. Génessier's Clinic" houses the rest of the supplements. "Le fantastique," a segment of the French TV program Cine-parade, features Franju talking about his filmic technique and dismissing the term "cinema fantastique" as too vague. 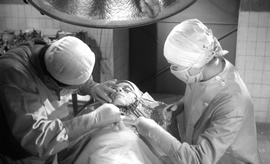 Amusingly, this colorful extra takes place on a colorful lab set complete with gaudy test tubes and a wild-haired host decked out as a mad scientist. The film's screenwriters, Pierre Boileau and Thomas Narcejac (whose novels inspired Diabolique and Vertigo), appear in excerpts from Les Grands-peres du crime, a French mystery documentary in which they discuss their partnership and their favored methods for creating suspense. "Medical Charts" contains a gallery of terrific behind-the-scenes photos and publicity material, and two theatrical trailers are included: the U.S. double-bill pairing (as Faustus) with The Manster, complete with the goriest surgical bits, and the original, far more genteel French trailer with English subtitles.

The first Blu-ray of the film arrived in 2010 from Gaumont in France, looking superb but minus any English-friendly language options. In 2013, Criterion finally upgraded the film to American Blu-ray with the same excellent HD transfer from the French disc and an expanded slate of extras, adding on an interview with Scob (9 mins.) about her Franju collaborations, plus liner notes by novelist Patrick McGrath, historian David Kalat, and director Guy Maddin. It's also worth noting that Blood of the Beasts is presented in HD as well with its French and English language audio tracks. 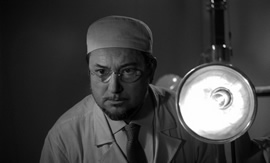 Two years later, the BFI issued its own dual-format edition on Blu-ray and DVD, with an HD transfer essentially identical to the previous two Blu-rays with a similarly robust bit rate and beautiful appearance, also in French with optional English subtitles. Interestingly, it doesn't overlap in the slightest with the American edition in terms of bonus features and firmly establishes itself as an essential special edition of the film as well. The biggest new extra is an exclusive audio commentary by Video Watchdog's Tim Lucas, who digs deep into the film's significant role within genre cinema, explains its parallels to the rest of Franju's work, and offers relationships to a couple of significant episodes of The Twilight Zone. He also shares Pauline Kael's memorable (positive) assessment of the film and offers effusive praise for Scob while also pointing out the neat symbolic ramifications of a few often overlooked shots. It's a very worthwhile study and should make this one an easy double dip decision for 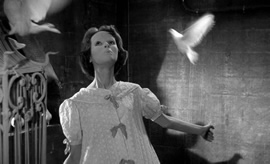 fans of the film. The video-based extras also offer no overlap with previous editions, kicking off with the 14-minute Monsieur and Madame Curie 1953 short film by Franju with Nicole Stephane, Lucien Hubert and Lucien Bargeon, relating the medical achievements of the famous scientists through narration by Marie Curie and a style emulating classic silent films. It's a fascinating counterpoint to the main feature, adopting an equally beautiful but dispassionate approach to show how science can make a positive change in the world. 1958's La premiere nuit is another Franju short, this time spending 19 minutes for a fantasy-tinged look at a boy's decision to spend the entire night in the Paris metro after catching glimpse of a blonde schoolgirl. Complete with a shimmering Georges Delerue score, it's a gorgeous little miniature and a terrific snapshot of urban Paris life in the late '50s; the new HD transfer of this one is very impressive as well with the rich, shadowy cinematography looking superb throughout. The 46-minute, 2009 documentary "Les fleur maladives de Georges Franju" offers a thorough look at the filmmaker's career starting with his short films and all the way through his features, with participants like Scob, Robert Hossein, Claude Chabrol, cinematographer Jacques Champreux, assistant Bernard Queysanne, and writer Kate Ince examining the tension between the beautiful and grotesque in his work. The newly-shot "For Her Eyes Only" is a 17-minute interview with Scob (who later made a nod to her Eyes role in the great Holy Motors) who talks about how Franju chose her because of her "dreamer" quality and was aiming for something "lyrical" instead of "trashy." She also talks quite a bit about her own career and the nature of her multiple collaborations with Franju as a young actress. She also offers her own thoughts on aging versus the modern fad for face lifts, opining that "wrinkles are not necessarily a disaster." Finally the disc comes with a robust liner notes booklet including excellent essays by Ince, Roberto Cueto Llera, Raymond Durgnant, and Kevin Jackson, plus informative production notes and bios by Isabel Stevens and Michael Brooke.