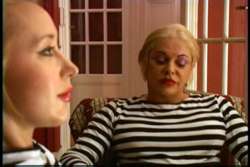 This second installment in Cinema Abattoir's French-Canadian series of experimental, sexually adventurous collections of short films (after Erotisme and followed by A Rebours) downplays the shock value somewhat in favor of a more transcendental tone. The disc bypasses a traditional menu selection, instead unspooling each film in a row for a string of surprises, not all of which are entirely pleasant.

First up is 1967's surreal Belgian tone poem by Roland Lethem, "Les Souffrances d'un oeuf meurtri," which alternates monochrome and color footage divided into chapters. A despondent man plays with a starfish on his pillow and affixes it to his bathroom mirror while brushing his teeth; a naked woman lies in some grass with a crucifix between her legs; and a bearded man spits out an egg that turns into a bloody mess on his face when he tries to eat it for breakfast. The fact that it's bookended with images of fetuses and newborn babies indicates this might be a meditation on abortion and female sexuality (thus the title's meaning for French speakers); in any case, it's definitely effective. More modern is "Catharsis," a very quick Belgian horror short from 2000 by Hélène Cattet and Bruno Forzani in 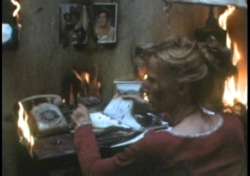 which a man is repeatedly attacked by an unseen assailant who punctures him with a knife, drives a drill into his skull, and pulls his head apart with a vice.. or so it would seem. Very gory and shot in Argento-style lighting, this one really comes out of left field and packs a quick, nasty punch. The bizarre, multi-national "Pandrogeny Manifesto" (2005) has two blonde women in zebra-striped shirts (well, one of them is a guy in drag) reciting monotone thoughts from "Breyer P-Orridge" about the manipulation and transformation of the human body into a "third entity" beyond gender, intercut with various images of surgical fusions and distortions on the same two participants. A lot of viewers will probably hit the fast forward button on this one after about two minutes. Much more interesting is the wordless Serge de Cotret's "Theocordis" (2007), a creepy and atmospheric Canadian exercise in religious iconography as the Super 8 camera prowls around a church intercut with disturbing juxtapositions of Christ images and a victimized woman.

The American "Pantelia: Meditations on the Number Ten" (2007) by Micki Pellerano feature various recitations on the mystical significance of the title number alongside a barrage of cosmic, tantric and occult images, along with a droning, hypnotic soundtrack. Again it's a bit overwhelming but fascinating in its thorough obsessiveness. On the other hand, Amy Schwartz's "Pinhole Flames" mercifully only lasts three minutes as it assaults the senses with a shrill industrial soundtrack and flickering abstract images through pinholes in front of the camera. 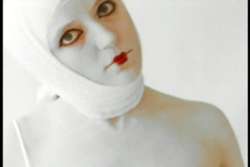 By far the most unforgettable short of the set is "Burn," a visually astonishing little 2007 masterwork by Reynold Reynolds and Patrick Jolley in which a family calmly goes about its business in their house while everything -- the contents of their refrigerator, their books, their telephone -- gradually goes up in flames, and creepy figures in bedsheets (also on fire) scuttle around the floor. The whole thing climaxes with a man slowly dousing himself and his sleeping wife in gasoline, which leads to an ash-laden finale. Definitely ten minutes worth the price of the entire disc. "Western Sunburn" (2007) by Karl Lemieux smashes footage of old westerns into an emulsion-melting nightmare, accompanied by a delirious piano score. Finally, 2004's "Convulsion Expulsion" from Usama Alshaibi will definitely clear out your next dinner party as a woman painted white, wearing a white sheet in a white room, strips naked and starts expelling blood from her lower orifices. Well, that's definitely a showstopping way to end the set. If you play all the shorts straight through, a long section of black at the end then gives way to another ten minutes of random experimental footage from an uncredited director.

The packaging for this DVD represents perhaps the most ambitious of Cinema Abattoir's releases as it comes in a plastic case wrapped in butcher's paper in string. The image quality is excellent overall but obviously varies depending on the condition of the shorts, which range from pristine to deliberately scratchy and distorted. Almost all of the footage is presented full frame, and all but one of the shorts are in very effective two-channel stereo that will give your speakers (and especially your subwoofer) a heavy workout.