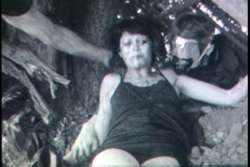 penetrating herself through the title orifice, rendered in a strange, hypnotice editing style. The Canadian "KI" depicts a three-minute act of oral pleasure in an abstract, jittery filmic style that pretty much counteracts any possible categorization as pornography.

The Belgian "La Fin de Notre Amour" is basically an ode to self-mutilation as a muse inspires a man to literally open himself up to his writing; it's striking and strange, never wearing out its welcome. The equally anti-erotic "Extase de Chair Brisee" is another Canadian offering, this time from 2005, as a woman on a country road is roughed up and kicked around by two hooligans in leather, only to get their just desserts. Shot in very gritty black and white, this wouldn't be out of place in the filmographies of Michael or Roberta Findlay. The equally unsettling but narrative-free "Baby Doll" from 2003 (those sick Canadians again!) has the title object being subjected to a variety of indignities on camera, while the prize for most disturbing short easily goes to "The Loneliest Little Boy in the World," which spends five unforgettable monochromatic minutes with a woman in black l 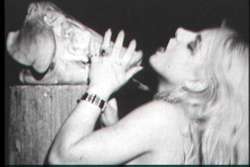 eather dancing in flames and getting down with a severed pig's head. Finally, the set winds up on its most blatanly explicit note with "Paranoid," as a woman uses a variety of sex toys to show off while grinding away to a heavy metal song.

Run in a limited pressing of 500 units (with 40 set aside for an even more limited metalic packaging), L'Erotisme is consistent with other short collections as its quality varies based on the source material. Some look deliberately dirty or grungy, while others are clear and colorful. Aspect ratios shift between full frame to about 1.85:1, and the stereo audio is fine given the modest nature of the source material. Extras include two additional shorts, the 13-minute "D'Yeux" (basically a series of erotic art images) and "Imperatrix Cornicula," which spends about ten minutes depicting a woman's feather self-pleasure. Certainly an interesting package, it's probably not the best viewing option for couples night (unless you're very, very broad-minded) but certainly worth checking out if you're a fan of Walerian Borowczyk, Matthew Barney, Richard Kern or any other artists unafraid to fuse sexuality with high art.