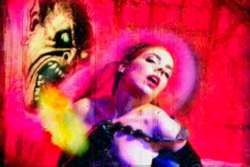 The set kicks off with quite a bang thanks to the extreme 2007 B&W Quebec short, "Washing Machine," from a director credited only as "MOM." Shots of the titular appliance in action bookend five minutes of a naked man and woman undergoing what looks like some pretty harsh role playing in which she's repeatedly dunked underwater in a bathtub while he expels waste in reverse. Then he smears the contents of a brownie pan all over her face. Lots of fetishistic shots of kinky black vinyl boots punctuate what might happen if a pretentious college art student went completely amuck with a 16mm camera, but you certainly can't call it dull. The German "Man spricht Deutsh" flits by in a quick two minutes of Brakhage-style animation, while Quebec returns with Serge do Cotret's longer and more extravangant "Sacré-cur 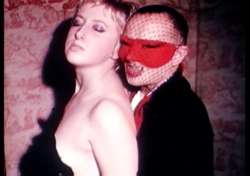 de Satan," an explicit visual collage of Nazi, Christian, and demonic images apparently designed to offend as many demographics as possible, even if the final effect is more like a music video crossed with a Redemption kink video. The two-minute "Yellow Fever" by Frédérick Maheux takes a similar approach, mixing almost subliminal still shots of a Japanese woman in various states of erotic arousal with psychedelic highway footage. The heavily stylized "J." (which looks a lot like the trailer for Hatchet for the Honeymoon) depicts what appears to be a child's distraught mental state after observing her parents in the throes of passion; though not graphic at all, it's a fascinating little creative exercise and one of the set's high points thanks to the keen visual sense of directors Solomon Nagler and Alexandre Larose. Also Canadian, B&W, and more suggestive than explicit, Karl Lemieux's "Passage" is easily the most linear short as it depicts two women being driven out into the countryside where they are invited to participate in a foursome at a country house, followed by the fallout the next morning. Even less overtly sexual but interesting is François Miron's "Hymn to Pan," a 2007 five-minute piece about a female dancer in a black leotard whose inspiration for a photographer becomes increasingly wild and unsteady, eventually fracturing into a state of pure delirium. 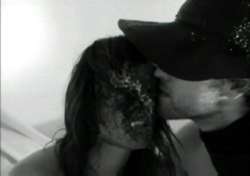 Usama Alshaibi's inexplicable "Dream of Samarra" is basically a minute of footage of people in the desert, processed to look like a 20th generation VHS tape. The frenzied 1968 oddity "Satan Bouche un Coin" by Jean-Pierre Bouyxou is easily the most striking short of the disc, a Kenneth Anger-style collision of shots of a creepy stage magician and his half-nude female assistant who turns into a mannequin, a guy whipping and ravishing a severed statue head, and other odd grace notes like glass eyes collecting around a human skull, all scored with unsetting rinky-dink circus organ music. Sensitive types may want to pass on the next one, Aryan Kaganof's "Dead Man II: Return of the Dead Man," an incredibly grungy, borderline pornographic shot in which two dirt-smeared bald guys dirty talk each other into some puke play, after which an old man wanders through a bar and has hallucinatory visions of a blasted-out apocalyptic wasteland. The arresting finale in a candelit dance hall (and a really sick final smack at the viewer) cap off the longest and most extreme offering of the set, reportedly based on the writings of Bataille. The ear-shredding atonal soundtrack by Merzbow is just enough to push this one over the edge into the realm of the truly dark and twisted; proceed at your own risk. An untitled B&W 2008 short by Quebec's Lucia Fezzuoglio combines found footage of two women in period garb into a creepy tone poem, while the last short, Enrique Arroyo's "The Other American Dream" from 2004 follows a young girl in a van about to be taken to a very ill-fated gig as a indentured prostitute. It's a jarring, heartbreaking way to end the set, but the eerie ambient soundtrack and chilling one-camera shooting technique make it a tough one to shake off.

Cinema Abattoir's DVD release is limited to 500 copies and comes packaged in a unique plastic case outfitted with chicken wire underneath the sleeve. For the die-hard completist, according to their site, "Twenty-three off-market editions are presented on a carved black monochrome plate and bound in a thin tissue of Luciferian Love - calling upon the astrology of the Abîme-Cinéma. Against the grain of the alchemical Great work  only the Black Sun remains." Certainly a worthwhile adventure for devotees of transgressive filmmaking, the collection splits the shorts into two sections accessible by two big "X" marks on the main menu. Picture quality is excellent overall but as usual varies depending on the source, with all but one presented in the correct 4:3 aspect ratio (the other is flat 1.85:1 letterboxed). The very aggressive 2.0 stereo soundtrack might induce nightmares if you play it at full blast.