While American companies have churned out some pretty incredible compilations of outrageous trailers from the format's golden age ranging from the '60s through the '90s, leave it to Britain to toss its own hat into the ring with a formidable series of its own. Nucleus' Grindhouse Trailer Classics

series has been going strong since 2007, and their third entry of 55 titles offers the most rewarding selection yet of selections both familar and extremely rare.

Thing kick off with a bang courtesy of the original trailer for Act of Vengeance, a wild and trashy 1974 rape/revenge gem also known as Rape Squad. The trailer's a pretty solid indication of the nature of the film itself, an unjustly overlooked 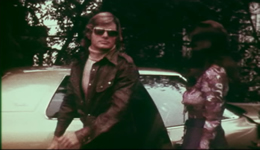 piece of lunacy about women banding together against a sex maniac with a fondness for "Jingle Bells." Next is the English-language trailer for the sexy Italian mondo offering Sweden, Heaven and Hell, best known for its swinging Piero Umiliani score which spawned the popular Muppet song, "Mah-Na Mah-Na." Things take a more silly turn next with The Doberman Gang, the first in the popular saga about clever dogs trained for a bank robbery, followed by the '73 sexploitation rarity The Female Response (directed by trash film vet Tim Kincaid, aka Joe Gage). Veronica Lake slums in one of her last films, Flesh Feast, as a doctor using maggots for innvoative new therapy with a nasty Nazi-themed twist; this been around the block on several comps in the past, but this is definitely the best it's ever looked.

Slash: The Blade of Death is the obligatory kung fu offering in this batch, a rare but entertaining Golden Harvest production with a rousing, swordplay-packed preview; later on Angela Mao also gets a few kicks in with one of her more typical programmers, Deadly China Doll. Schizoid is the American AIP trailer for Lucio Fulci's A Lizard in a Woman's Skin, one of his wildest and most popular gialli presented here as a straight-up horror film with lots of screaming and blood.

You can probably skip past the next one, the delirious Terminal Island which has been on jillions of compilations by now and several Code Red releases, and go straight to Panama Red, a dopey PG pot-growing romp from the '70s porn team of John Holmes and Bob Chinn. The regional horror offering The Touch of Satan comes off better in its trailer here than as a feature film, as anyone who has seen its celebrated roasting on Mystery Science Theater 3000 can attest, while the immortal AIP Pam Grier Defiant Ones rip-off, Black Mama, White Mama, always makes for good party viewing with many of the good bits contained here.

A couple of familiar trailer staples come next with the fondly-remembered Without Warning (still way overdue for an official release), the Canadian horror/comedy curio Cannibal Girls, the Crown International crime jigglethons Superchick and Police Women, the bloody Bigfoot cult classic Shriek of the Mutilated from the late Michael Findlay, a dose of Cannon Films madness with the gory Sho Kosugi cable favorite Revenge of the Ninja, and the perennial celebrity T&A favorite The Working Girls with a young topless Elvira. For the record, a few of the other usual suspects scattered here include Don't Open the Door, The Candy Snatchers, Macon County Line, The Centerfold Girls, Blue Sunshine, The Night Evelyn Came Out of the Grave, and The Rats Are Coming! The Werewolves Are Here! 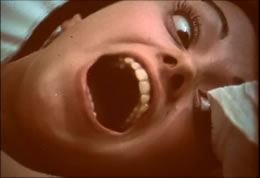 Luckily there's also a huge bounty of more obscure material here, some of which will have cult fans' mouths dropping. You get a few lessser known softcore offerings like AIP trailer for Germany's Swedish Wife Exchange Club, the downbeat and sleazy Sirpa Lane vehicle Nazi Love Camp 27, the naughty UK puff piece The Swappers from Derek Ford, and the Danish naughty stewardess romp Swedish Fly Girls. However, the real shocker here -- and reason enough by itself to buy this disc -- is Linda, the incredibly rare English-language trailer for Jess Franco's astounding Lorna the Exorcist. God knows what submerged vault this one's been hiding in but it's fantastic to actually see this firsthand (including a claim that it "begins where The Exorcist left off!"). You also get the entertaining original trailer for the college partner-swappin' hit The Harrad Experiment (which you'd think would be a much more common trailer than it is) featuring a young Don Johnson while he was dating co-star Tippi Hedren's daughter Melanie Griffith. Some of the other rarities here include Peter Collinson's criminally underrated Open Season (which appallingly has yet to get a decent video release anywhere in the world), a much better transfer than we've ever had before of the lively and gory trailer for Invasion of the Flesh Hunters (the Americanized release of Antonio Margheriti's Cannibal Apocalypse, which was hacked down in most editions), the frothy and strangely scarce Samantha Eggar crime caper The Lady in the Car with Glasses and a Gun (complete with a catchy Michel Legrand score and Petula Clark theme song), Carroll Baker's controversial X-rated giallo smash Paranoia, and the

grotesque snake-biting, slimy antics of that old VHS fan market favorite Succubare, looking so good here in full widescreen you'll be dearly wishing for a remastered edition of the movie itself. The biggest shock here for die-hard giallo fans is the American trailer for Armando Crispino's The Dead Are Alive, which has been elusive on home video until now and is also really wonderful to finally see.

Not enough yet? Okay, here's a rundown of the rest: the black power classic The Spook Who Say by the Door; John 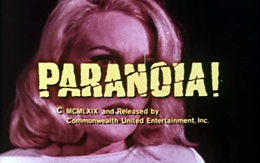 Saxon and William Conrad in the down home racing thrills of Moonshine County Express; the savage biker cult film Northville Cemetery Massacre; Al Adamson's seedy society dropout saga The Female Bunch (with Lon Chaney, Jr.); the jungle-swinging Italian quickie Tarzana the Wild Girl; the cheapjack blaxploitation western Soul Soldier; Jesse Vint going vigilante in Black Oak Conspiracy; a very brief trailer (or fragment of one) for Beware of the Brethren, another alternate title for The Fiend; Leon Klimovsky's Spanish gothic exercise The Vampires' Night Orgy; the women's lib/college campus obscurity Class of '74; the most infamous PG-rated horror film of the '70s, Blood and Lace (and why the heck isn't that one on video, MGM?); the brutal Telly Savalas/Robert Shaw Spanish western A Town Called Hell; the strange Tommy Kirk psychosexual comedy Mother Goose a Go Go; the very good Southern chase staple A Small Town in Texas with Timothy Bottoms and Susan George; Jim Brown headlining the blaxploitation actioner Black Gunn with Martin Landau(!); the inexplicable inclusion once again of The Loves and Times of Scaramouche (which was also seen in this essential DVD series); and finally the truly out-there sex/avant garde '71 mindbender, The Telephone Book.

Image quality is generally very good; as with most trailer comps, some are more immaculate than others but all of these look at least as good as and in most cases much better than other releases in the same vein. The disc is presented in anamorphic widescreen with the trailers shifting between 1.66:1 to 2.35:1 depending on the source. The disc also kicks off with a fun promo for Nucleus' highly recommended Video Nasties: The Definitive Guide. Novelist and film writer Kim Newman contributes a video intro and a "Guide to Grindhouse," a 15-minute featurette discussing some of the crazy promotional ploys from the '70s with an emphasis on creating the illusion of censorable material. A fun poster gallery highlights all of the feature films two at a time, and the whole thing comes with optional English subtitles so you can quote along with all of those voiceovers. As a final bonus, you also get a huge slate of additional Nucleus trailers including Children Shouldn't Play with Dead Things, Dead of Night, Night of the Bloody Apes, Playgirls and the Vampire, Ghost Story, Teaserama, Bloodbath at the House of Death, Death Ship, and Gwendoline, just to name a few.