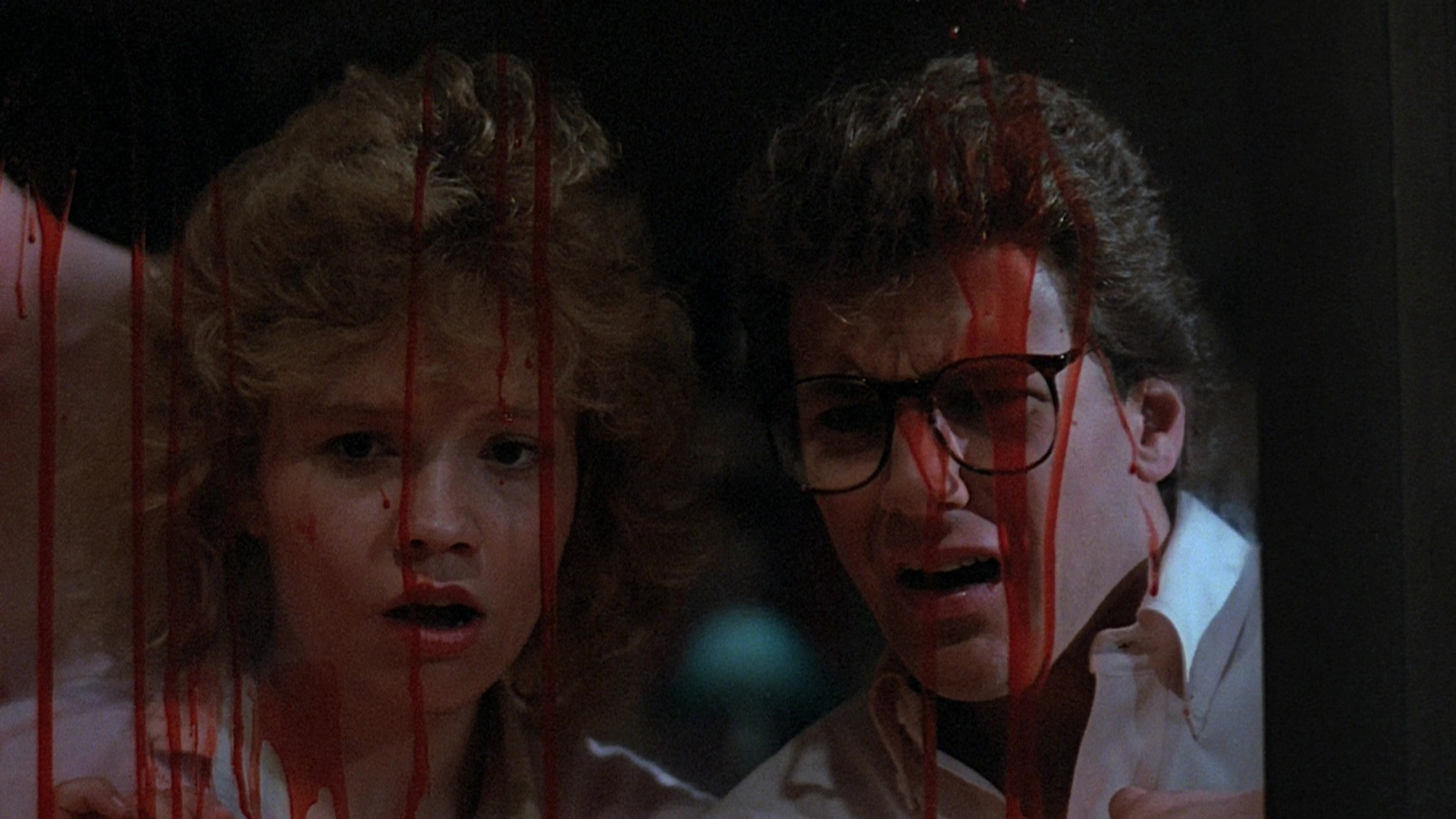 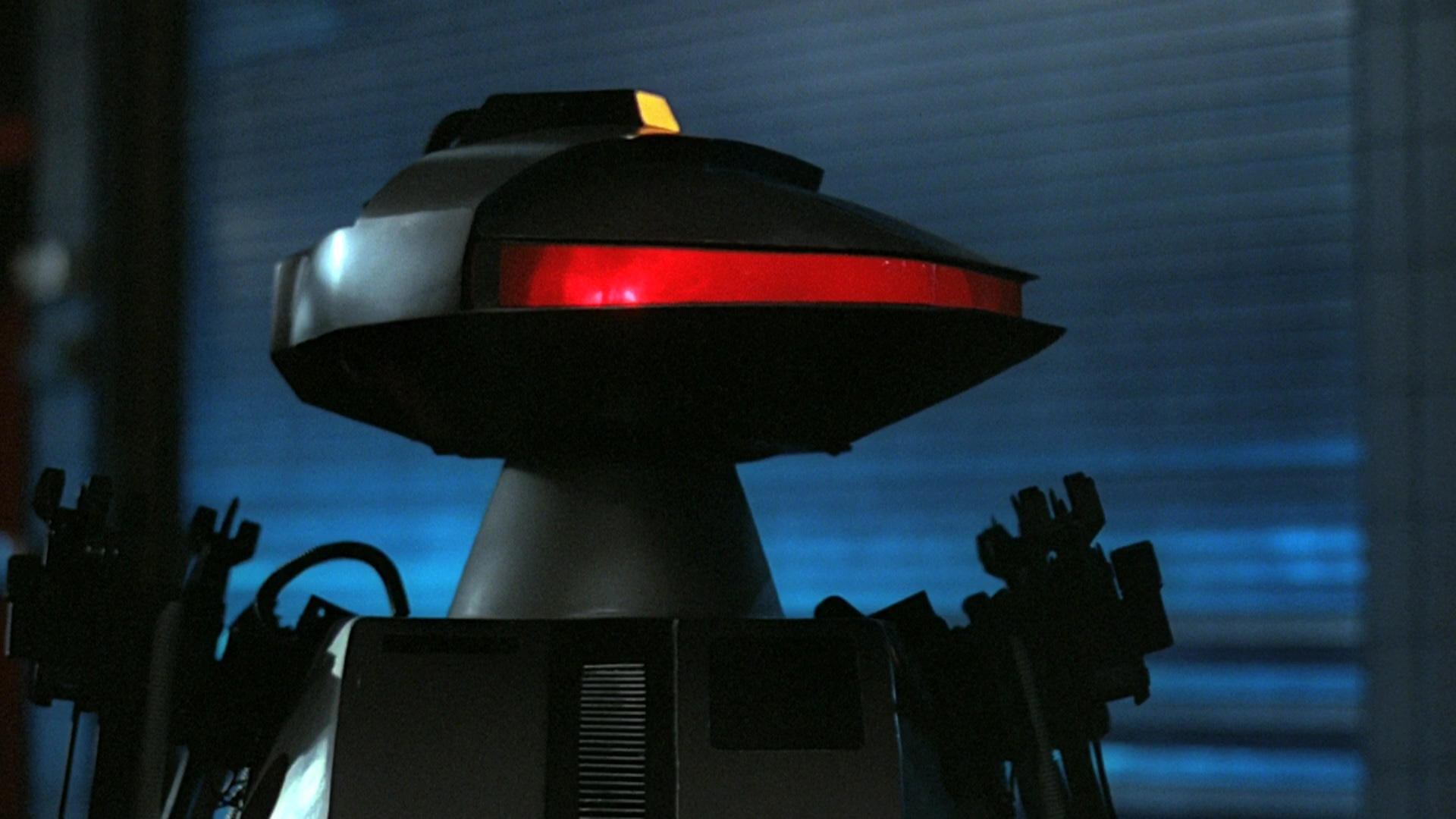 A horror/sci-film can't get much more joyously '80s than Chopping Mall, a low budget and very fast-paced survival film that pulls the conventions of slasher films (teens trapped in an isolated setting and killed off one by one) into a can't-miss concept: killer robots with laser beams running amok in a shopping mall. If that doesn't sound fun, there's something terribly wrong with you.

At a big L.A. mall, the owners are unveiling a brand new innovation in security: the Protector 101 series robots, which can neutralize any potential robbers and keep them contained for the police. The pitch film for the robots looks suspiciously violent, but the mall goes ahead and implements the system, complete with a midnight-to-dawn lockdown on the premises. Some teens including the food court staff decide to stick around in the mall after closing hours, which turns out to be a very bad idea as a lightning storm triggers a glitch that sends the three robots on a rampaging killing spree.

Running a lean, Roger Corman-mandated 76 minutes, this is a film that never overstays its welcome and delivers everything you'd expect - and more. The very likable cast is a B-movie dream 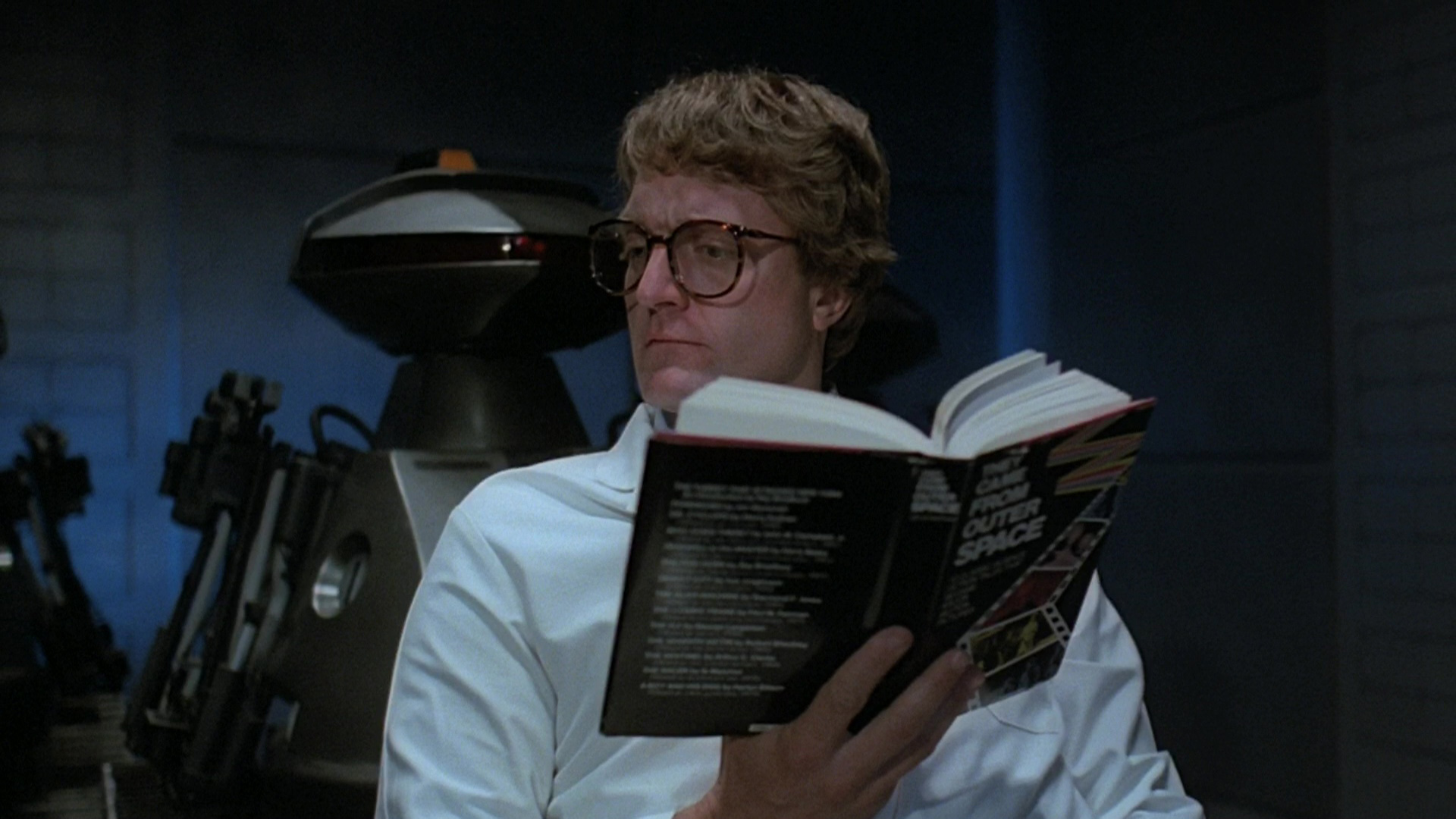 for '80s buffs with main girl Kelli Maroney building on her status as the decade's premiere mall Valley scream queen after Night of the Comet. 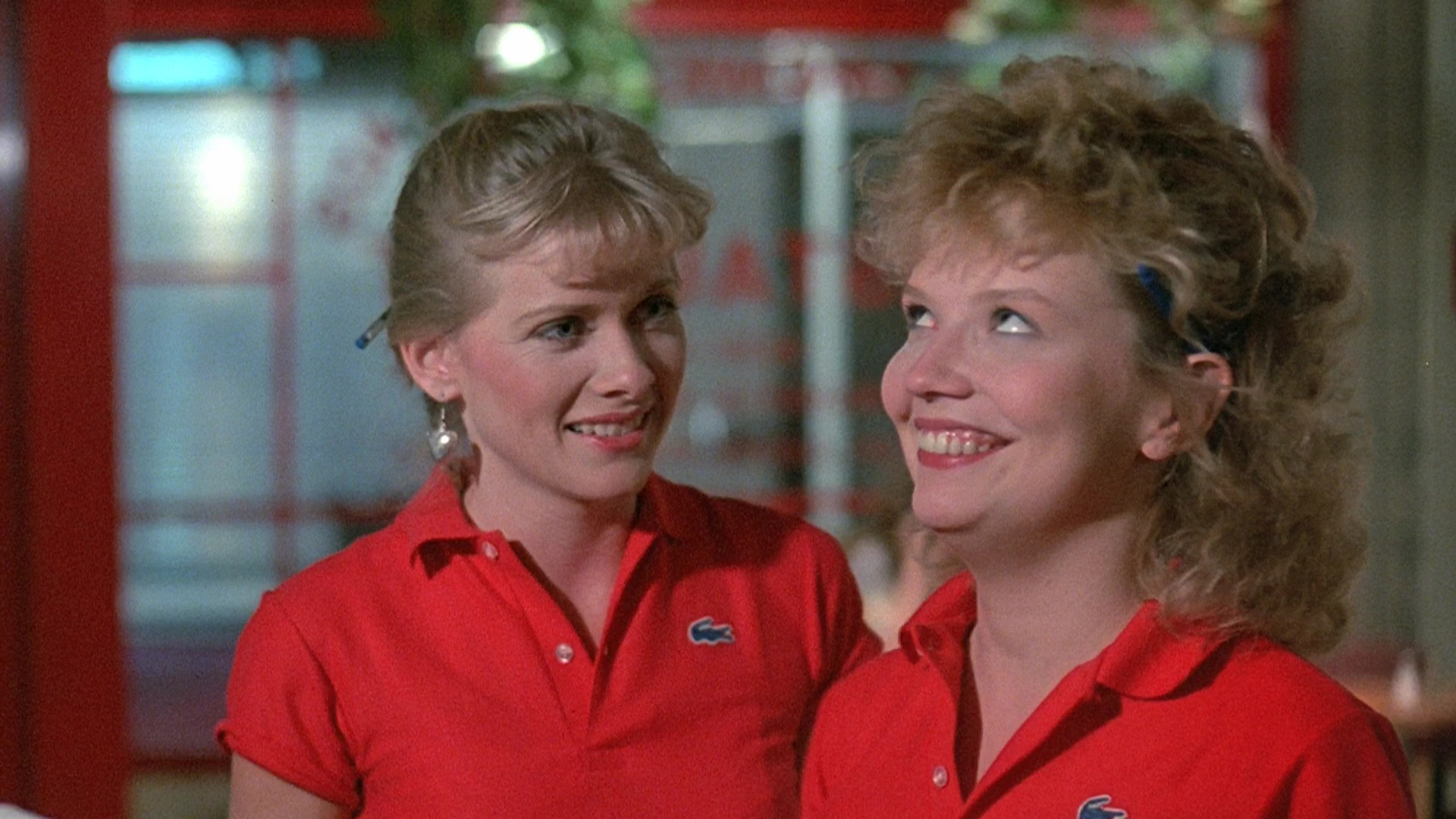 Also on hand are Russell Todd (Friday the 13th Part 2), Tony O'Dell (best remembered for TV's Head of the Class), Karrie Emerson (Evils of the Night), John Terlesky (star of another one of the best '80s Corman films, Deathstalker II, and doing some of the screen's best gum chewing here), Suzee Slater (Mind Twister), and Nick Segal (Breakin' 2: Electric Booglaoo), all of whom get some great moments. It's also a real treat for Corman and cult movie fans thanks to the barrage of in-joke store names and movie posters papering the food court walls, not to mention a very funny early cameo by Paul Bartel and Mary Woronov (as their characters from Eating Raoul), an extended bit by Dick Miller (as Walter Paisley, of course), a bit by Mel Welles (Little Shop of Horrors) as a cook, and even Gerrit Graham in a small but pivotal role as a robot technician.

Cooked up in Roger Corman's New Horizons office by Jim Wynorski and Steve Mitchell (who also teamed up on The Haunting of Morella), Chopping Mall started life under the title R.O.B.O.T. and got greenlit by Vestron Pictures, who was really branching out further into theatrical films after making a killing on genre titles in the VHS market. For various reasons the film went out to test markets as Killbots under Corman's Concorde Pictures banner and failed to catch on, after 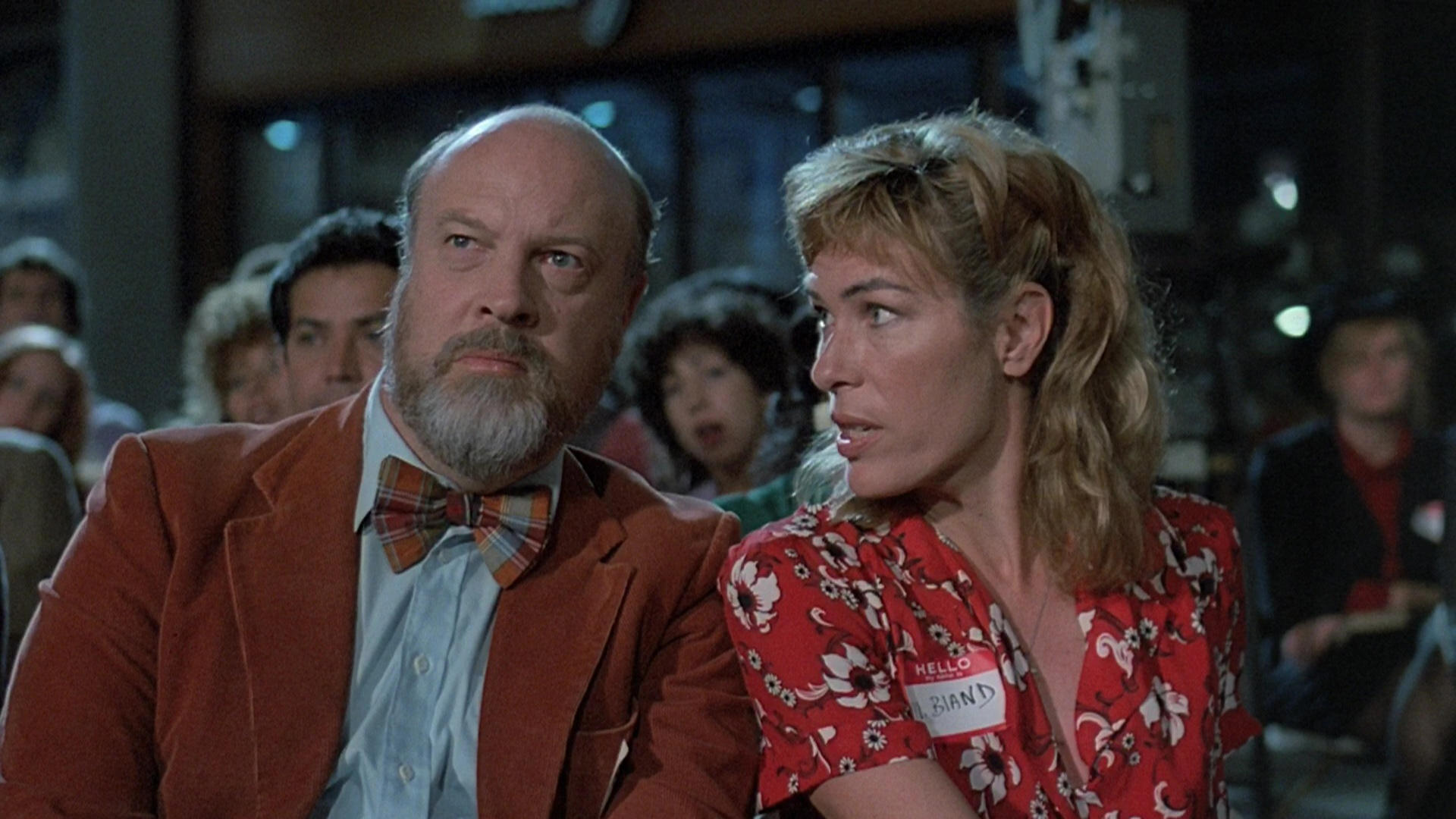 which it was given another editing pass and issued under its immortal current title (complete with great but misleading poster art that looks more like a gory zombie film). It went on to garner a substantial cult following on VHS from Lightning Video (a brand under Vestron), but for various reasons involving control of the original elements it took an unusually long time to hit DVD. In 2004, Lionsgate issued a DVD using the same VHS-era master (complete with the old 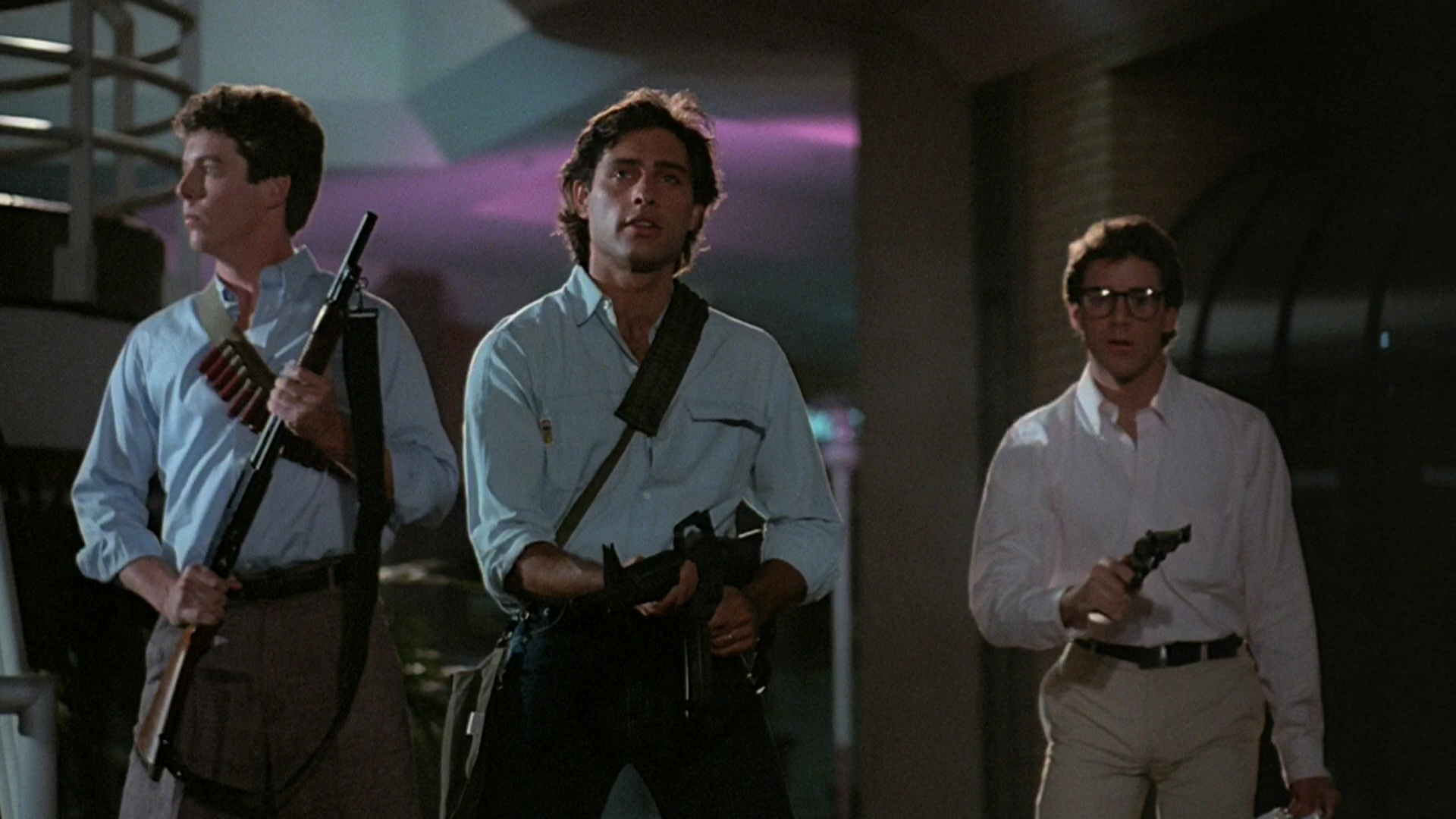 logo at the end) sporting the original trailer and two welcome extras, including a commentary with Wynorski and Mitchell (who also served as second unit director). It's a great track as they cover the original plans to shoot at the Beverly Center, the ins and outs of filming after hours at the Sherman Oaks Galleria (which was subsequently razed and turned into a very different structure now under the same name), the tricks of making the robots seem mobile even on escalators, and the quid pro quo of getting a spider to crawl on one of the stars. The 15-minute "Creating the Killbots" features Wynorski, Mitchell, and robot creator Robert Short features a look at how the look of the robots evolved and had to be cheated a bit to accommodate the demands of the shift in shooting locations.

Despite its fan base and the fact that Lionsgate possesses one of the finest (and least exploited) genre catalogs on the planet, the road to getting a good transfer of Chopping Mall turned out to be complicated indeed. In short, Wynorski managed to get a sparkling new HD transfer of the film created from the original negative in Corman's possession, showing off just how colorful and slick the film could look under the right circumstances. Thanks to the movie gods, the new transfer ended up being the impetus of what is now spine number one in the very welcome Vestron Video Collector's Series, a major 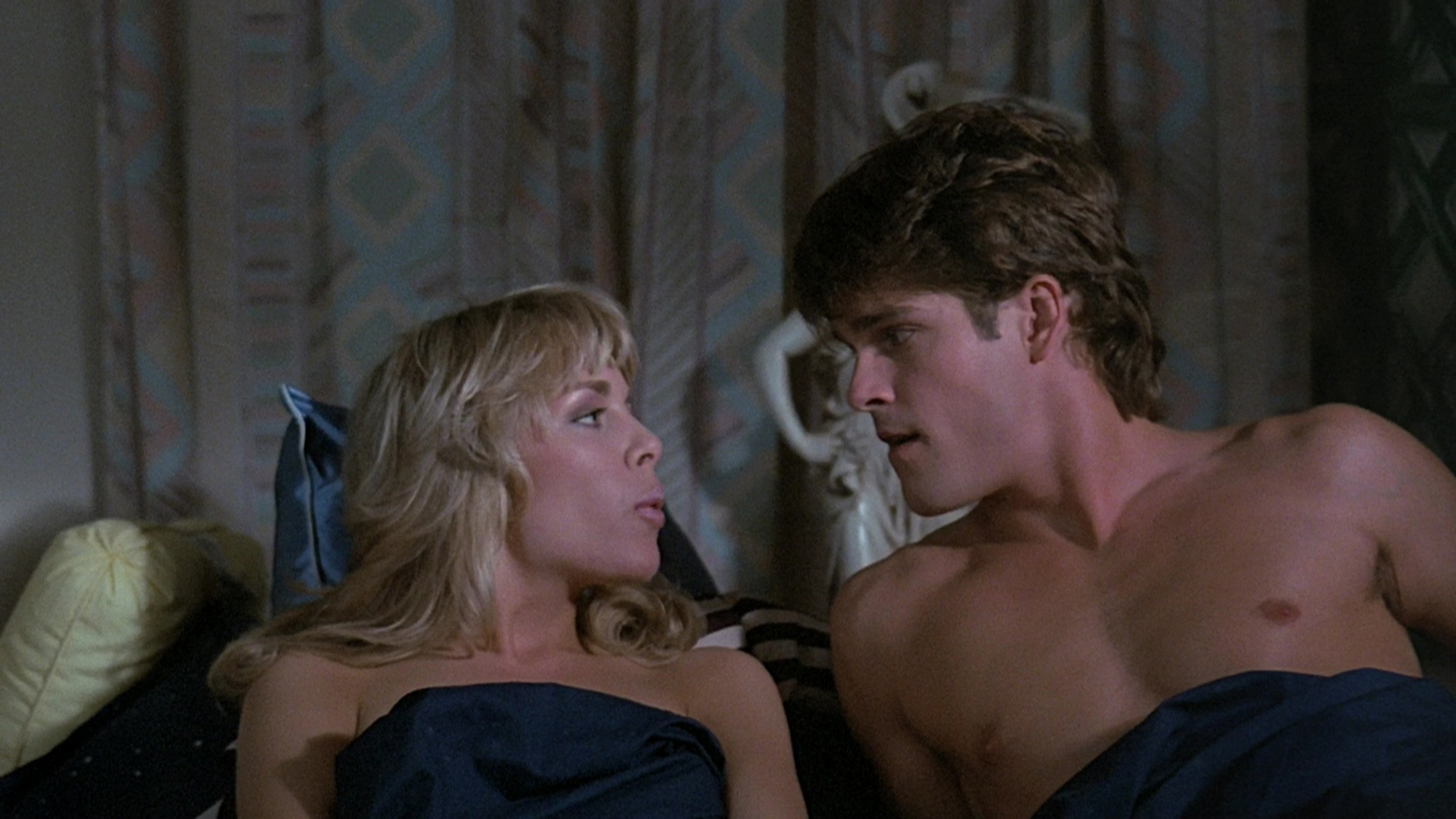 boon to '80s horror fans with deluxe editions finally created for titles like Blood Diner, Return of the Living Dead III, both Waxworks films, and, uh, Chud II: Bud the Chud. (How about Eyes of Fire, guys? Hint, hint.) Needless to say it looks pretty stunning, especially if you're familiar with the drab old transfer; vibrant shades of blue and magenta now pop out of the screen, and the blacks finally look nice and deep. To say this is a sight for sore eyes would be an understatement. The DTS-HD MA English mono track is also a massive improvement over past versions (and even the tinny-sounding theatrical prints), restoring some much-needed low end to that catchy score by Chuck Cirino and the many laser blast sound effects. Optional English SDH subtitles are also provided. 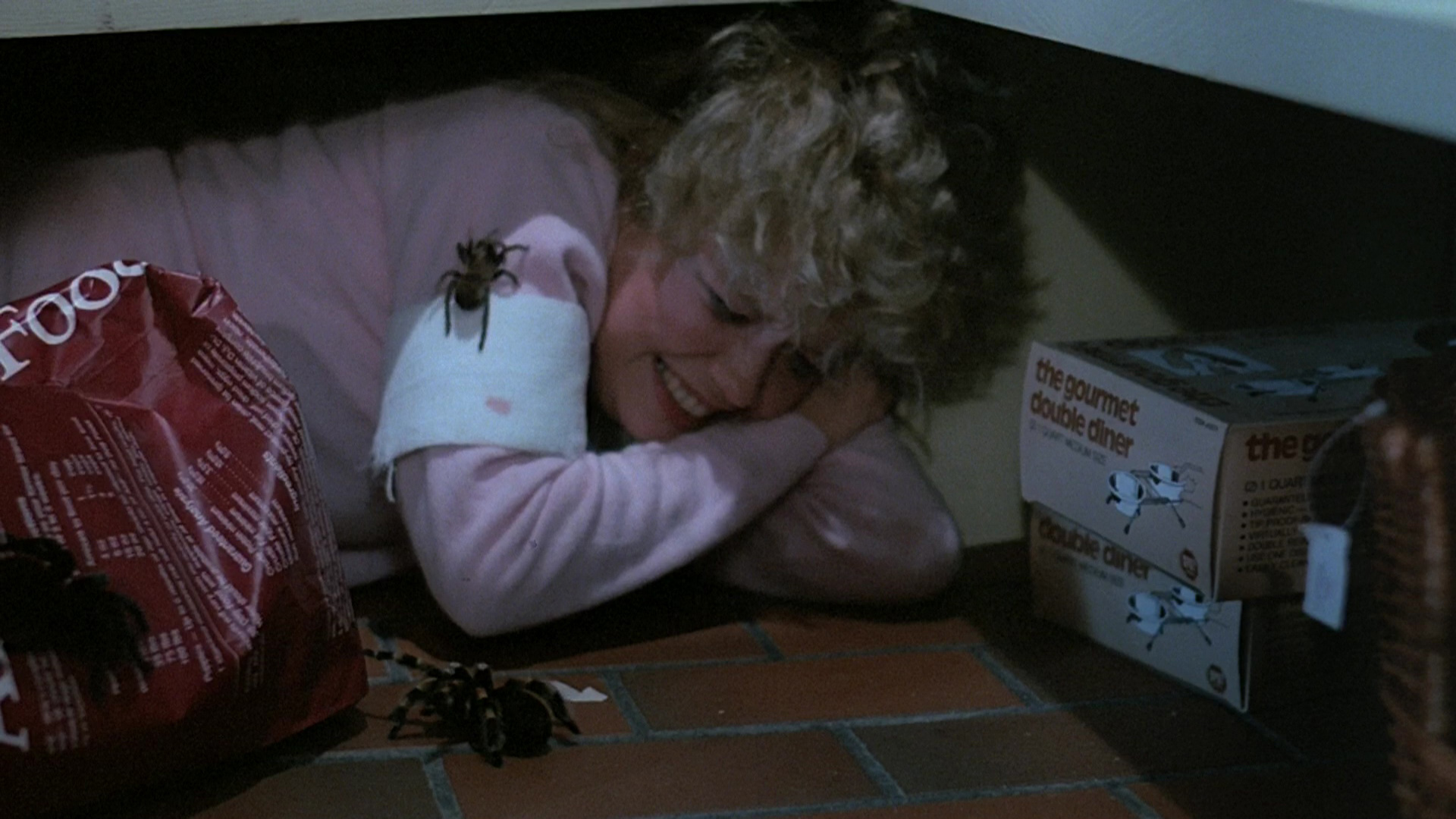 The film also comes outfitted with three audio commentaries including the previous Wynorski/Mitchell one. The pair return for a new track with Maroney, who's chipper and smart as always (if you heard here track on The Zero Boys, you'll know what to expect); her reactions during the pet store scene are a particular highlight. I can't comment on the second track since it features yours truly and Blumhouse's Ryan Turek, but hopefully you'll enjoy this appraisal by two '80s kids who grew up during the Vestron era.

Beyond the trailer carried over here, it's also an onslaught of new video material produced by Mitchell (who also spearheaded the extras on such mammoth TV special edition sets as Combat! and Thriller) kicking off with the 26-minute "Back to the Mall," featuring Crampton, 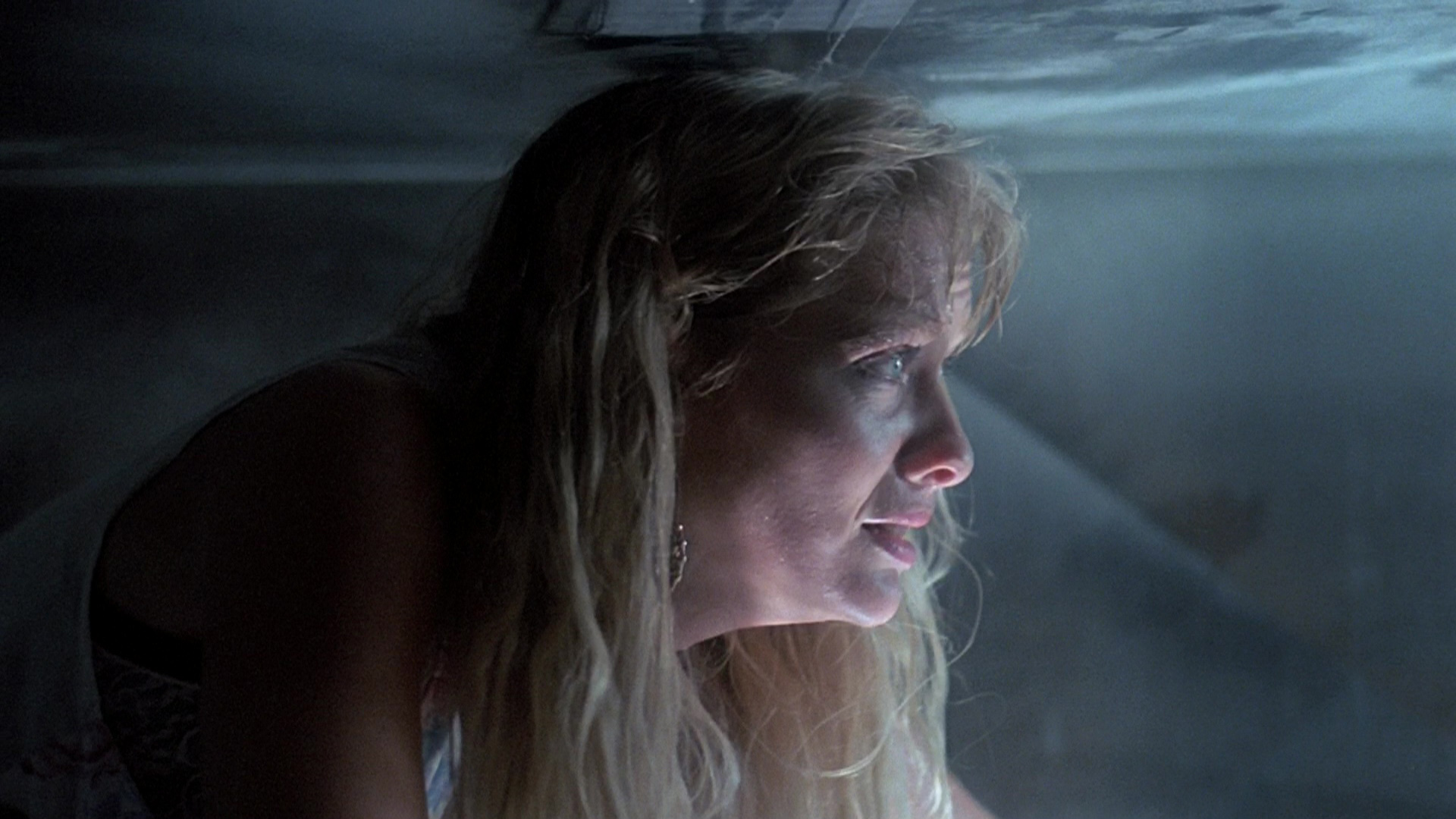 Maroney, Wynorski, Mitchell, Terlesky, Todd, and Segal talking about creating Valley personas, dealing with treacherous fire gags, and their differing opinions about the film's final title. The 8-minute "Chopping Chopping Mall" features editor Leslie Rosenthal (and Wynorski and Mitchell, briefly) recalling the process of pulling off the film's memorable effects on a tiny budget, including a lengthy discussion of how they pulled off the now-classic exploding head scene. "Talkin' About... the Killbots" takes a 12-minute look at the creation of the film's metallic villains with Short (and several of the cast and crew members) showing the development of the creations from early sketches (influenced by Gog) through the finished creations we know today, including the human-inspired behavior that came to define them and the voice over finally done by Wynorski himself. Regular Wynorski collaborator Cirino gets his turn with the 11-minute "Scoring Chopping Mall," in which he explains how his score developed as being "electro-synth" because it's depicting what a robot would be thinking. (The Morricone nod explained here is pretty great, too.) His entire isolated score can be played with the film, too, a nice touch for those who don't have the expanded vinyl release (which Cirino also shows off in the featurette). The amusing "The Robot Speaks!" is a goofy 2-minute set of ten questions with one of the robots (in character), while "The Lost Scene" (3 mins.) details a funny discarded bit with Bartel and Woronov (and a horse named Brewster) that never made it in front of the cameras. The 6-minute "Army of One" features the film's "biggest fan," Carl Sampieri, who shows off the only surviving robot from the film (and the only working one to boot) in his personal collection along with other ephemera including sketches and an original shooting script. Needless to say, you'll have a nice day with this one.