Film critics have never had more fun saying a film's title on TV than Eating Raoul, one of the most unexpected black comedy hits in indie movie history. What sounded like either a sleazy sex film or a sick cannibal comedy from the droll director of cult favorites like Death Race 2000 and Private Parts turned out to be something no one had ever quite seen befor

e. This weirdly charming tale of murder and debauchery manages to target middle-class moral denial, prudery, swingers, capitalists, and Southern Californians in general, not necessarily in that order. However, unlike some of its more bitter companion films from the same era like Serial, it's a winningly genial film with a perky streak of questionable taste that's managed to age perfectly over the years.

The chaste wine connoisseur Paul Bland (director Bartel) lives happily in a Hollywood apartment with his wife, Mary (Woronov), a nurse who has to fend off the advances of her lecherous patients, That problem carries over at night with the swingers moving into their complex, one of whom causes so much trouble he winds up getting killed by Paul with a frying pan to the noggin on their kitchen floor. The death turns out to be fortuitous as it gives them a little quick cash, since Paul's just lost his job and, in addition to paying the rent, they hope to open their own restaurant, Paul and Mary's Country Kitchen. Then they seize on a bright idea: take out ads in swingers' magazines, use Mary to lure in rich guys with baby and Nazi fetishes, and bump them off before things go too far. Things get a little more complicated when they wind up tangling with the friendly neighborhood burglar, Raoul (Night of the Comet's Beltran), who starts making moves on Mary when he isn't selling off the dead bodies as meat to the local dog food company. As Paul gets more jealous, how long can this unusual trio keep their business going?

The main reason Eating Raoul still works is the creative determination Bartel and his crew put into making the film over a period of several months, scraping up money wherever possible when their initial idea of a ten-minute pitch reel didn't pan out. That real-life enthusiasm bleeds over into the enterprising desires of the Blands trying to realize their culinary dreams at the most violent of costs, and Bartel's decision to avoid the graphic shock value route of John Waters made this an odd du

ck indeed at the time. (Interestingly another startling bl

ack comedy, Basket Case, came out around the same time and serves as sort of a gory New York flipside to this film.) Bartel had already recruited former Warhol Factory vet Woronov for a role in his Roger Corman productions of Death Race 2000 and Cannonball, and they teamed up famously as actors in other Corman classics like Rock 'n' Roll High School and Hollywood Boulevard.

Their offbeat chemistry together was undeniable, but their success as a drive-in comedy team wasn't enough to convince Corman to give them their own film. So off they went to make their own movie, with Bartel penning the screenplay during a trip abroad with Richard Blackburn, the writer and director of Lemora: A Child's Tale of the Supernatural (who also appears in the film as the Blands' dinner party guest James, "from the Valley"). Eating Raoul turned out to be a winner with both critics and audiences, earning a long life on both cable TV and VHS for many years. It's also a showcase for some great character bits from the likes of Buck Henry, Ed Begley, Jr., and Groundlings veteran Edie McClurg (Ferris Bueller's Day Off), who steals her one scene as a fur-clad orgy attendee. Bartel died before he and Woronov could realize their hopes for a sequel, but they reunited for several future films like Get Crazy, Chopping Mall (in which they played the Blands again), and even The Living End.

The first official American DVD of Eating Raoul came in 2004 from Sony, who bungled it badly with an atrocious, damaged transfer improperly formatted for anamorphic playback with the image annoyingly squeezed no matter how you adjusted it. The full frame Arrow release in the UK from a dated master wasn't much better, though an improved HD version started popping up on some pay movie channels around the end of the '00s. Fortunately those have all been swept aside by the Criterion release, with a delicious Blu-Ray release that far exceeds what one might expect for a film shot for so little money in the early '80s. That dreaded murky '80s film stock problem from the era is nowhere to be found here; it's bright, vivid, and often remarkably clear, showcasing every detail in the gaudy, eye-popping production design and finally doing justice to the repeated symbolic use of the color red (both in the decor and characters' costumes, not to mention some vivid swingers' party lighting). Transferred from the original negative under the supervision of cinematographer Gary Thieltges, it's a real shocker for fans of the film who never might have imagined it could look this good. The lossless DTS-HD mono audio is what it is, limited to the nature of the original dialogue and the mixture of original and library music.

First of the welcome roster of extras is an entertaining audio commentary with Blackburn, production designer Robert Schulenberg, and editor Alan Toomayan, who cover such topics as the aforementioned color symbolism (hitting a bit of a brick wall when it c 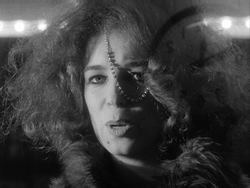 omes to Woronov's lavender dress near the end), the repeated "boring shots" of doors throughout the film, the hurried one-night shoot scheduled for the hilarious orgy scene near the end, Bartel's working philosophy and methods, and much, much more. The new 24-minute "Cooking Up Raoul" features Woronov, Beltran and McClurg giving a basically chronological history of the making of the film, from the early days with Corman to the arm twisting required to get Bartel to cast the young, relatively inexperienced Beltran, who was "dripping sex." Woronov has some of the best bits, talking about her outlook on the frequent erroneous perception that she and Bartel were a real-life couple, Corman's aversion to comedy, and her initial reaction to reading the script. McClurg has a great moment, too, talking about her complete ignorance of the naked people behind her big scene until she saw the finished film. Also included is an almost six-minute gag reel originally compiled as a birthday gift for Bartel and a 21-minute 1982 interview with Bartel and Woronov, shot on a video camera with the pair talking about the satirical targets of the film (or lack thereof), comparisons to Warhol, and their working relationship together. However, the biggest Bartel-related extra here is the much-need inclusion of two of his early short films, previously available eons ago on VHS from Rhino. "The Secret Cinema" (1968) is a terrific 21-minute short film that perfectly represents Bartel's surreal, dry sense of humor as it depicts the gradual realization of New York secretary Jane that she's being secretly filmed and manipulated by those around her for a hidden cinematic purpose. Sort of a twisted precursor to The Truman Show, this was later remade by Bartel for a slicker, all-star episode of the '80s TV anthology show Amazing Stories, but the original has a rough, quirky charm all its own and is almost worth the retail price all by itself. Much more slight but not without interest is the eight-minute "Naughty Nurse," made the following year and, like its predecessor, looped entirely in post-production. Basically it's about a nurse and doctor who decide to steal away for some afternoon delight, leading to a serious unfolding of events with a little punchline at the end. Featuring a quick appearance by Robert Downey (Sr.), it's most interesting as an early exploration for the darkly hilarious kinkiness that would erupt full force in Private Parts, his first directorial feature three years later. Other extras include the original trailer and, rather than the usual insert booklet, a fold-out paper menu containing an appreciative and well-written essay by critic David Ehrenstein, who also points out a few other notable faces glimpsed onscreen including critic Myron Meisel and director John Landis!