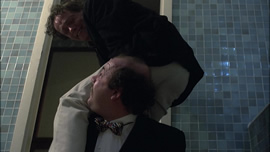 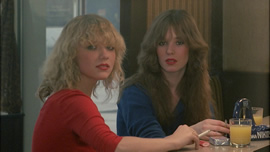 Based with a few alterations on the real-life deeds of Austrian serial killer Werner Kniesek, this disturbing, strangely undervalued and still unflinching shocker details a day in the highly twisted life of a nameless, criminally insane convict (Leder) released from prison after an attempted murder. Over the course of the day he attempts to kill a cab driver and ends up fleeing into the woods where he finds refuge in an empty house... or so it would seem. In fact, the property is occupied by an older mother (Rosset) and her daughter (Rabenreither) and wheelchair-bound son (Götz). Before long he's assaulting each of them with a psychopathic single mindedness, descending to increasingly bleak levels of depravity before returning to civilization for an ironic finale.

It's hard to believe filmmaker Gerald Kargl never helmed another narrative short after this impressive debut, since he displays an admirable command of his craft with an excellent lead performance by Leder and eye-popping roving cinematography turning this into a dangerous but unforgettable cinematic experience. Also essential is the score by electronic maestro Klaus Schulze, who scored this in between the startling art-porn film Body Love and the Aussie horror gem Next of Kin; most recently he's been collaborating with Lisa Gerrard, whose mystical sound wouldn't be out of place here either. The 24-hour time frame of the film is an interesting slant as well, setting this apart from previous thrill-kill movies like The Honeymoon Killers and The Tenderness of the Wolves; the choice to let several sequences unfold in real time is particularly savvy, creating a suffocating, nightmarish ambience that lingers long after the closing credits.

For some reason, Angst has been little seen in most English-speaking territories with no official subtitled release in the U.S. at all until the 2015 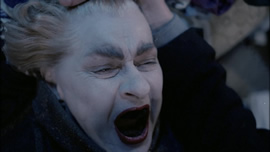 release by Cult Epics on separate Blu-ray and DVD discs (with identical extras). The film received significant play in France, interestingly enough, where it sported an excellent French dub track and made its official Blu-ray debut from Carlotta Films with no English-friendly options on the film or the extras (which are covered below). The film's content is strong, to be sure, with even the director indicating he'd 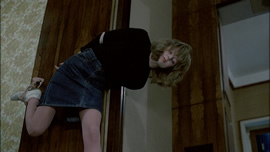 tone down a little of it (and in fact optically darkened one particularly harsh sequence for earlier home video version, though you can still easily make out what's happening and it's back to its original brightness on the Cult Epics disc), but it's odd this film remains largely unknown while its obvious successors like Nekromantik and Henry: Portrait of a Serial Killerhave flourished.

The Cult Epics release features the same satisfying HD transfer found on the French disc, framed at 1.78:1 with a similar color scheme. The film has that somewhat rough, occasionally gauzy look with deep blacks found in many early '80s European productions (think Diva or In a Glass Cage) but this appears to be a solid reflection of the source material. For some reason the French disc has a negligible extra couple of pixels of information on the right and bottom, but it has zero effect on the appearance of the film. (Here's a sample grab from the French disc.) In a nice change of pace, Cult Epics has gone the lossless audio route with a DTS-HD MA 5.1 German track, plus a 2.0 German or French track, with optional English subtitles. The film can be played with or without the distributor-imposed, 7-minute prologue, which spends a great deal of time elaborating on Leder's criminal background to explain how he wound up in prison, as well as an optional 5-minute intro by director Gaspar Noe (Irreversible) touching on his love of the film and his preference for the voiceover-laden French version. Also included is an audio commentary with Kargl and critic Marcus Stiglegger, which goes into extreme detail about both the production and the creative decisions used to trick the viewer's sense of space and scale, resulting in a realistic but oddly heightened experience. Both the intro 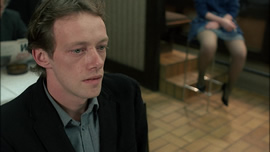 and the commentary segue directly into the director's preferred cut without the prologue.

Now, the extras. In "Erwin Eder in Fear," the lead actor gets a 21-minute interview (sitting in an idyllic forest and then doing a walking tour of the filming locations)) about the real-life inspiration for the film (including some even more unpleasant 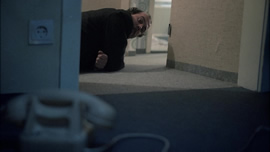 details thankfully left out of the film), the violent potential within everyone, and the challenges of depicting blood drinking on screen. This one's exclusive to the Cult Epics release and newly recorded (replacing a non-subtitled Leder interview about criminal violence with Dr. Harald David), while the 27-minute Gerald Kargl interview with Nekromantik director Jörg Buttgereit runs through the production's origins, Leder's previous fame in Das Boot, the climate around screen violence at the time, the exhibition and censorship issues the film faced, and his thoughts on doing a sequel as his next feature ("not a chance!"). This one previously appeared on the French release (minus subtitles) and was recorded many years earlier via the long-defunct Barrel Entertainment, who announced Angst as one of their titles over a decade ago. Also carried over from the French release (and originally shot in 2004 for the Barrel release) is an English-language interview with cinematographer Zbigniew Rybczynsk, who chats for 36 minutes about how his prior assignments led to his job on this film and his interest in cinematic experimentation. The enclosed booklet features a intro by Nico B. an interview with Kargl by Stiglegger, a Carl Andersen essay about the film's place in the movie serial killer pantheon, text Q&As with Leder and Rabenreither, and several vintage clippings about the real-life crimes (with English translations). Also included are trailers for this film and Buttgereit's Schramm.