Quite possibly the most disturbing film ever shown in mainstream theaters, Henry: Portrait of a Serial Killer courted controversy from its initial festival screenings and, against all odds, became a textbook 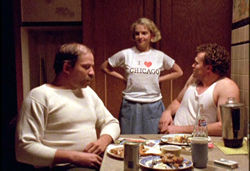 example of how an unflinching horror film can break through to wide critical acceptance. Released during the last great gasp of unrated films on American theater screens, this loose riff on the killing spree of notorious serial killer Henry Lee Lucas also marked the directorial debut of John McNaughton, who went on to projects as diverse as Mad Dog and Glory and the finest guilty pleasure of the last decade, Wild Things. Despite the title and potentially lurid subject matter, this deliberately grimy and upsetting film can't quite fall into the classification of exploitation; its moodiness and surprising restraint where it counts mark this as a solid arthouse contender as much as a gorefest.

Introduced during a slow montage of murders, soft-spoken drifter Henry (Rooker) decides to share his Chicago apartment with pal Otis (Towles) whose sister, Becky (Arnold), also decides to hang around after leaving an abusive boyfriend. Though Henry wins Becky over with contradictory stories of his traumatic childhood, he and Otis forge an entirely different kind of bond as partners in crime. Already a bit twisted, Otis is seduced by Henry's murderous skills and becomes an equally enthusiastic participant, culminating in a domestic break-in captured on home video for their later enjoyment. However, this unhappy threesome can only continue for so long...

Notoriously slapped with an X rating for "tone" by the MPAA, Henry includes 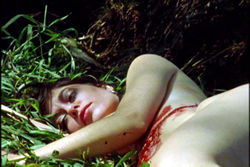 its fair share of grisly details (mostly aftermath shots in the beginning, the bloodless but harrowing break-in scene, and a few quick bursts of bloodshed here and there); however, the gut-churning mood established by the convincing performances and oppressive soundtrack are far more potent than any blood and guts. It's a film designed to leave the viewer shaken, paranoid, and convinced that the world is far from the safe and shiny environment presented by the general media; on that count, it more than succeeds and hasn't lost an ounce of its bite over the passage of time. Don't expect a good time, but this is essential horror viewing.

Shot in 16mm, Henry unspooled in theaters looking rather ragged and grainy, often overmatted to a 1.85:1 aspect ratio that left little headroom for the actors. All home video editions have restored the original full frame dimensions along with a great detail of color and detail missing from prints, though the first DVD from MPI fell short of the superior laserdisc thanks to a lackluster encoded job and frequent soundtrack synch problems on many players. Fortunately that bare-bones disappointment can be chucked aside to make room for Dark Sky's welcome two-disc version (packaged in a reversible sleeve containing a consumer-friendly cover on one 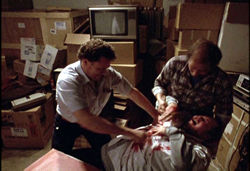 side and the controversial Joe Coleman original poster art on the other), which offers a superior transfer from a new hi-definition source that look much more film-like and razor sharp than the previous edition. The 2.0 mix is still horribly effective; it's probably a blessing that they didn't feel compelled to do a full-blown DTS remix, which would probably leave most viewers curled up and sobbing in a corner.

At last, McNaughton finally goes on the DVD record with a full-length audio commentary in which he breaks down the history of the film in impressive detail; though rarely discussing the events precisely onscreen, he serves as an effective storyteller explaining the film's fund-challenged creation step-by-step. The first disc also includes the theatrical trailer, a still gallery, and a trailer for the less interesting Henry 2.

All three of the leads join McNaughton on disc two for the lengthy, near-hour documentary "Portrait: The Making of Henry," which covers the same story from the broader perspective of everyone involved. Also included is the "Henry Lee Lucas" episode of the series The Serial Killers (available separately as a complete set); not surprisingly, it's a raw and chilling look at the most prolific killer in American history. A reel of outtakes and deleted scenes (sans production audio but with McNaughton commentary) shows some material dropped from the final assembly, mostly to tighten the film; it's not a big loss but interesting to see at least once. A lengthy sampling of storyboards rounds out the disc.