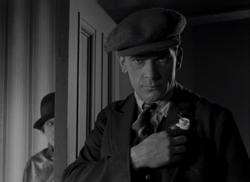 A familiar name to fans of classic British cinema, 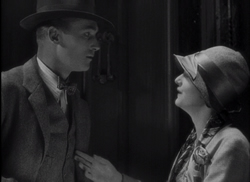 director Anthony Asquith started working at the end of the silent era and made his name with a string of high-profile literary and theatrical adaptations like Pygmalion, The Browning Version, The Winslow Boy, and The Importance of Being Earnest. However, some of his earlier work is a bit more audacious than those excellent drawing room films, as proven by the release of Underground. Once on the verge of extinction (a fate sadly suffered by the majority of British silents), this is the first credited solo effort from Asquith (and one of only three silents), offering a compelling snapshot of a city in transition as well as a striking mixture of poignant character study and kinetic thriller.

Among the hustle and bustle of central London, shop girl Nell (The Sign of the Cross' Landi) catches the eye of two men: nice guy Bill (Sylvia Scarlett's Aherne), a train porter, and the more aggressive Bert (McLaglen), who works at the local power plant. Bert doesn't take it too well when he's passed over by Nell, and decides to take advantage of a poor seamstress, Kate (Baring), who still loves him no matter how much of a vindictive stalker he might turn out to be.

In a sense you could see this as a somewhat darker companion film to another great silent rediscovery, Paul Vejos' Lonesome, which was made the same year; it also anticipates the impressive opening act of F.W. Murnau's City Girl, one of the very last major silents. Both are 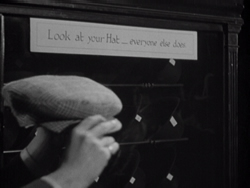 essentially simple love stories embellished with dizzying, detailed looks at the urban environment around them. As the title implies, a great deal of the film takes place in and around the London Underground, creating an elaborate world of shadows and textures along with hordes of people. The visual ideas here are parceled out sparingly but with great effectiveness, including a brilliant 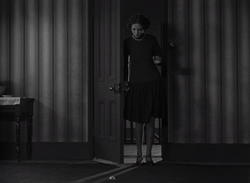 shattered mirror gag and an exciting nocturnal climax on top of the power plant that rivals what Hitchcock was turning out at the time. Had Asquith gone for the commercial thriller route instead, one can only wonder how things might have turned out.

A film left in tatters by the ravages of time, Underground underwent a difficult and extensive restoration by the BFI initially shown to the public in 2009 with a live, very vibrant score by Neil Brand. That accompaniment is preserved on their dual format release, containing a Blu-Ray and DVD, with 5.1 and 2.0 audio options. It's a fine experience either way, and the restoration itself looks terrific. A handful of shots look a tad dupier than others due to the original elements, but almost all of it is pristine with a solid gray scale and impressive detail. Also included is an alternate score by Chris Watson, which offers a different but effective interpretation only limited by a somewhat less powerful sonic presentation.

Leading off the extras is a nine-minute featurette about the restoration of the film, including some pretty harrowing looks at the condition of the film before these efforts were undertaken. "The Premier and His Little Son" compiles some great footage from 1909 to 1912 of Asquith in his childhood days with his father, who weirdly played a key role in the conviction of Oscar Wilde. The 1958 educational short "Under Night Streets," previously seen on the BFI's London on the Move DVD, makes for a fitting chiaroscuro look at the Underground's operations in the dead of night, while the DVD includes a couple of standard def extras, "Scenes at the Piccadilly Circus and Hyde Park Corner" from the early 1930s and "Seven More Stations" from 1948, both of which focus on key locales in the London where the Underground played a key role and expanded out significantly after World War II. Finally the liner notes booklet comes with a Bryony Dixon essay about the film itself and its debt to German Expressionism, with additional pices by Christian Wolmar (about the role of the Underground from the Victorian era to the initiation of the London Transport), Simon Murphy (tying the Underground to Asquith's research on the film), and a Michael Brooke bio of the director. Quite a lot of entertainment here, including at least two genres for the price of one in the marvelous main feature itself.