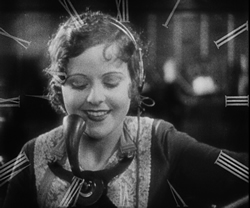 A spectacularly good film once almost forgotten entirely in the rush of movie history, Lonesome was made during the transition from silent to sound film and, like many films from that pivotal period, is a brilliant burst of visual artistry before filmmakers really had to settle down and figure out how to get this talkie thing sorted out. The story is utterly simple, mostl 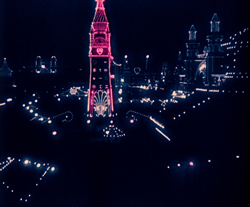 y a meditation on the state of the single lonelyheart living in the big city. Jim (Tryon) is a factory worker, while Mary (Kent) runs a switchboard; both are seen getting up in the morning in their apartments and going about their business as a superimposed clock counts down to an experience that will change them both. On their day off, both decide to head for some fun to Coney Island, where they meet and strike up an instant romance (without ever learning each other's names). Surrounded by throngs celebrating the 4th of July weekend, they spend their time enjoying amusement park rides and sharing a memorable dance to the hit standard "Always" before a fateful accident separates them, possibly for good.

Featuring a poignant twist ending and almost feverishly assured direction, Lonesome definitely plays in the same sandbox as other major films of the period like Man with a Movie Camera, Murnau's Sunrise and City Girl, and Berlin: Symphony of a Great City. Universal found great success with its initial release, largely due to the decision to prepare both a silent version and a sound one including a music score (including the aforementioned "Always," which plays a major role in the film and even has its sheet music superimposed on the screen at times), sound effects, and some brief spoken bits, mainly a (fantasy?) sequence in which a chat on the beach between the twosome transforms into a dark, stylized sound stage. Some charming hand color tints were also selectively applied, including some two-toned exteriors, a yellow moon, and multi-colored bobbing balloons.

That sound version with the original tints, salvaged from a Cinematheque Francaise nitrate print, forms the basis of the much-needed restoration seen here, a process lasting many years but begun in its final incarnation in 2008. The end result wowed audiences at it 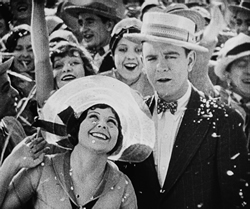 s festival screenings (including its status as a must-see title at the TCM Classic Film Festival) and helped its reputation to grow, a process that will certainly continue with this release. Bearing in mind that this was a film almost entirely demolished through its rarity and neglect, the results here are pleasing indeed. There's a fair amount of age-related damage that was beyond repair (mainly fine scratches and some water damage, mainly at the end), but considering the severe wear and tear it's suffered over the years, the results are very satisfying. It looks like actual film without any overzealous digital scrubbing, and the soundtrack (which was deteriorating rather severely) has been returned to much of its original complex, impressive original state, a mixture of music and sound smartly fitting the onscreen action.

The main extra for the film itself is an audio commentary by film historian Richard Koszarski, who does a fine job of explaining the film's history and the reasons for its hybrid status. Most fascinating are his comments about the music, explaining why the actual song "Lonesome" doesn't play a major role in the film and how the use of "Always" would have affec 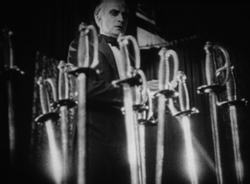 ted audiences at the time. It's a quick and fact-filled track, well worth listening to after a viewing or two of the main feature.

However, though it isn't actually billed as such, this is essentially a triple feature of Fejos films. Some of his other key titles are apparently lost for good (The Last Moment being perhaps the most famous casualty), but what we do have here are two sterling titles almost as impressive as the headlining film. The two stars of 1928's horror classic The Man Who Laughs, Conrad Veidt and Mary Philbin, reteam here a year later for The Last Performance, another silent/sound combination shown here in its only existing form, silent with translated Danish intertitles (under the title The Twelve Swords). Though it doesn't quite tread into traditional horror territory, this still feels closely akin to the genre due to its atmosphere of emotional torment and the extremely stylized visuals, which often tread into expressionist territory. Shot on the same sets as Universal's The Phantom of the Opera, it tells the story of Erik the Great (Veidt), a possessive and possibly mad stage conjurer who becomes obsessed with his assistant, Julie (Philbin). When she instead falls for the younger Mark (Fred MacKaye) and Erik's apprentice, Buffo (Leslie Fenton), meets a nasty fate, the eyes of suspicion drift to Mark, leading to a courtroom showdown. Truly macabre in its air of obsessive love and theme of a magician going mad, this is a brisk, striking 59 minutes of entertainment with a wonderfully ripe performance by the always entertaining Veidt, buoyed by a solid new score by Donald Sosin.

Also included is another 1929 Fejos film and easily his most ambitious, the talkie musical Broadway. This isn't your average Great White Way revue, though, since it opens up with an allegorical fantasy showing a colossal man striding above the streets of Manhattan years before Bert I. Gordon came up with a similar idea. Taking place mostly in an opulent nightclub (boasting one of the most impressive sets of the early sound era), it's the story of Roy (Tryon again) and Billie (Merna Kennedy), stars and offstage lovers working on a new Broadway show. When Billie's saved from being kicked off the production through the intervention of a gangster named Steve (Robert Ellis), she winds up in a tough spot that just gets worse when she sees thugs murdering the club's owner -- and good-natured clown Roy might be next. Though a few scenes betray the static tendency of early talkies, much of the film is a visual candyland complete with tracking shots, art deco costumes, and even a color (mostly red-toned) musical finale, rescued here by merging the surviving color footage from the silent version with the soundtrack of the visually incomplete sound one. The result is the longest extant version of the film (104 minutes), a fascinating experiment in cinematic archaeology as well as a major treat for movie fans. Also included is a 6-minute clip from a 1973 interview with cinematographer Hal Mohr (audio with film stills as visual accompaniment) talking about the film's genesis as a smash stage play and how he developed a crane capable of meeting the filming demands of the project. The other video extra is "Fejos Memorial," a visual essay using portions of Fejos' 1963 oral history for Columbia University (recorded shortly before his death) to cover his remarkable life, which went from vagrant to film director in Hollywood and Europe to noted world explorer and renowned anthropologist. The liner notes booklet features several components: "Great City, Great Solitude," a Phillip Lopate essay covering the director's path to Hollywood and the closest aesthetic companions including King Vidor's The Crowd; "The Travels of Paul Frejos" by Graham Petrie, which essentially picks up with some of the information covered in the previous piece and surveys his entire Tinseltown career and the reasons for Frejos' dramatic career change; and brief text comments about Lonesome from the aforementioned Frejos oral history. Quite a package from top to bottom, this is easily recommended to film lovers of all persuasions.