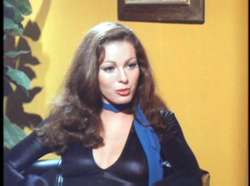 before the industry's controversial downgrade to shooting on video. As with Ban 1's essential 42nd Street Forever comps, this collection constantly surprises and amuses with its well-refined selections, sense of historical respect, and wry sense of humor.

Taking a cue from Mad Ron's Prevues from Hell, the disc is hosted by an eccentric host named "Alfred Cockhitch" (apparently "Rodney Scratchynuts" must have already been taken), who screens each preview with an appropriately seedy attitude. The dirty business starts with Exposed, a hard-to-see 1980 fictionalized stab at recapturing the box office of the French behind-the-XXX-scenes hit Exhibition with John Leslie as an ex-porn actor lured back to the business with a bevy of beauties including Lysa Thatcher and Sharon Kane. Then the always great Annette Haven takes center stage with the same year's High School Memories, 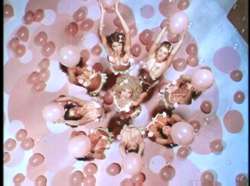 sort of an all-star mish-mash of Grease and Summer of '42 with John Leslie, Richard Pacheco, Brooke West, and Dorothy LeMay having sex everywhere from a school bus to hotel rooms. It's plenty of fun as usual from the never-dull Anthony Spinelli, though "porno chic" it ain't. Things get a bit artier with the comedic Wicked Sensations, featuring John Leslie (again!) as a married guy tempted by a luscious guest at a winter resort. However, that's nothing compared to the lavish visual excesses of Pink Champagne, an unbelievably complex and lavish salute to early Hollywood with plenty of writhing chorines, bright sets, period costumes, and faux-movie-star gentialia. Forget Casting Call; this is a future cult classic in the making if it ever gets out on DVD.

No less spectacular than those proceedings is Vanessa Del Rio, who steps up for Woman in Love, an okay 1979 potboiler about infidelity and group sex featuring an impressive roster of co-stars including Veronica Hart, George Payne, and Samantha Fox. Things get much more lesbian-y with Love Dreams, a little-seen '81 porn with Sue Nero exploring the Frisco swingers scene. Equally hard to see is the rather more interesting Tinseltown, which moves south to L.A. for a study of castin couch culture featuring newcomer Danielle Raye and the world's least likely male porn star, Bill Margold. Then things get flat-out ridiculous with Joy, a wonderfully ridiculous parody of rape-revenge movies in which young Sharon Mitchell is sexually attacked and turns into an out-of-control deviant, terrorizing the men of the Big Apple by jumping them at every opportunity (including a restroom menage-a-quatre that must be seen to be believed). Much less interesting is another obscurity, Spinelli's The First Time, which... well, apparently has lots of sex in it, but the concept never really comes through. The enjoyably steamy Seven Seductions of Madame Lau (billed here as Seven Seductions for some reason) features Richard Pacheco flying out to a remote island on a chartered plane and encountering the head-spinning word of Madame Lau (Annette Haven), whose identity and motives seem to change from one encounter to the next. Both of the stars get a thorough workout here, and Taboo's Kay Parker even pops up for the surprise romantic ending. Prolific director Carter Stevens is represented with Twilight Pink, a long-OOP title starring Veronica Hart in the story of a magic watch able to turn on any women chosen by its owner (holy Doris Wishman!), and the popular Aunt Peg series is represented with Aunt Peg Goes Hollywood, an okay 1981 entry with Juliet Anderson popping up as a nominal framing device for other actors to get it on including Linda Shaw and the short-shelf-life Farrah look-alike Rhonda Jo Petty. The prolific and multi-pseudonymed Howard Ziehm (best known for Flesh Gordon and Mona) shines as usual with Naughty Network, a string of TV parodies with various actors like Loni Sanders and Baby Sue Young in filthy versions of popular shows (and not a shred of plot in sight). 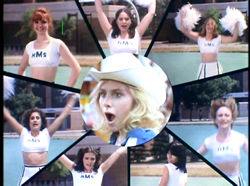 The cut-and-paste method finally turns up with Dirty Looks, basically a greatest hits package of scenes from hit New York films (mostly by Chuck Vincent) like Roommates and the essential Jack 'n' Jill. Annette Haven pops up again for a dual role in The Blonde, basically a hardcore remake of The Legend of Lylah Clare. No, really! Next up is The Devil in Miss Jones, a widely-seen and effective trailer that probably needs no introduction here; great movie, great trailer. Another Media Blasters special edition on DVD, the considerably less artful Debbie Does Dallas, comes up next, and the surprisingly well-edited and ambitious trailer is easily one of the best things the feature has going for it. Playgirls of Munich looks like some kind of co-production shot in Europe with American actors romping through Bavaria in the buff after sampling the local beer halls. One of the earliest hardcore apppearances (kind of) for Russ Meyer star Kitten Natividad is Bodacious Ta-Tas, an indication of her underwhelming future porn work (though half the time she only hosted or did softcore-- see Ten Little Maidens, etc.). Much more exciting and arguably the highlight of the entire disc is the elusive trailer for Radley Metzger's Naked Came the Stranger, a dazzling and wonderfully witty entry from his "Henry Paris" days with an equally enticing trailer prepared by the auteur himself in the usual razor-sharp Audubon Films style. The popular Wanda Whips Wall Street is a plottier-than-usual outing with Veronica Hart 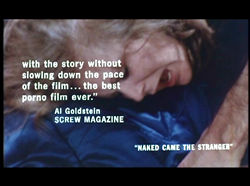 navigating through the sharks of the New York financial world, while everyone seems to go behind closed doors for sex on their desks. Then more working girls get a workout as the Nurses of the 407th (including the gung-ho Jessie St. James) tackle every man in sight in this better-than-average parody of M*A*S*H. Then it's back to New York again for Robin's Nest, featuring odd public-access adult star Robin Byrd in what looks like a plotless exploration of a swingers' club. The worthwhile Blue Ecstasy stars Leslie Bovee as a split-personality case who's literally a virgin or a whore, depending on when you meet her. Chuck Vincent's famous In Love (usually cited with Roommates as his best work) is another bid to bring porn to the mainstream, with Jerry Butler and Kelly Nichols stretching their acting chops as a pair of secret lovers whose meetings carry out over several years. Finally, Bad Company (no relation to the several Hollywood films of the same name) wraps things up on an odd note with a she-squad of burglars ravishing their victims.

Most of the trailers on this DVD look quite good, in some cases much better than the transfers of the actual features currently on the market. Obviously the low budget production values and inevitable signs of wear and tear pop up sometimes (and Pink Champagne could undoubtedly use a facelift if it ever comes on a little shiny disc), but there's really no room for complaints. Lightning-paced and thoroughly enjoyable, this is a solid reminder of how much fun theatrical adult filmmaking could be during an era that will most likely never be repeated again.

For a more thorough historical overview of the films included and the actors involved, be sure to check out the review at DVD Drive-In located here.