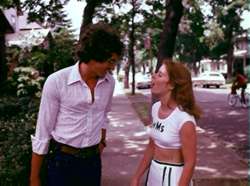 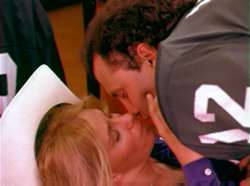 but eventually the two find a mutually satisfying way to, ahem, score.

Though she really can't act at all, Woods became an instant adult film favorite and generated plenty of mystique by disappearing soon after. Most of the women in the film likewise did a quick vanishing act, though several of the male players include familiar faces like Eric Edwards and Herschel Savage. The group showerroom orgy and the climactic scene with Woods are easily the most memorable in the movie; most of the comic dialogue is way below Three's Company on the wit scale, and some of the other performers look more than a tad uncomfortable in front of the camera. Likewise, the direction outside of these two standout scenes is mostly flat and static, a style that would become typical in most '80s product as the shift to video began to take over. 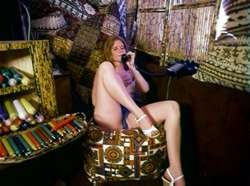 Though it's been available on video since the dawn of Beta, Debbie has fared quite poorly over the years thanks to an ancient, blurry transfer that made watching it an unpleasant chore. This double-disc edition finally presents a sharp, watchable rendition with accurate colors and detail; it's full frame in keeping with the original camera negative, though widescreen owners interested in replicating the 42nd Street theatrical experience can matte it off to 1.78:1 without wrecking the compositions either. Audio can be played in the original mono, an okay 5.1 remix that reverbs a little too much for comfort, and an amusing Spanish dub track ("Si, si, si!"). The film comes with two audio commentaries, both of which expand far beyond the scope of the feature itself; Robin Byrd (who performs in one sequence) talks about the state of adult filmmaking during her career into the '80s and mentions what she recalls about Woods, while X-pert Charles Bernstene gives a more historical overview of the film, its influence, its legal controveries, and the successful theatrical and video exploitation which caused it to endure to this day (and even inspire an unlikely Off-Broadway musical!). Disc two features the alternate cable version (which looks pretty dreary, drops the hardcore shots for obvious reasons and runs for a very long hour), an additional video interview with Byrd, a photo gallery, and the theatrical trailer.

Though it wasn't the first theatrical hardcore feature, Gerard Damiano's The Devil in Miss Jones was undeniably the first to receive good reviews and actually receive critical treatment 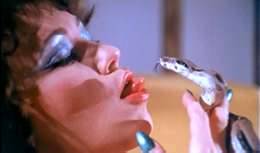 similar to that for any regular mainstream feature. Far from the grungy, goofy bumping and grinding of Damiano's previous Deep Throat, this fusion of Ingmar Bergman-style arthouse philosophy and kinky intercourse proved to be another smash hit and revealed a most unlikely sex object in its leading lady, part-time exotic dancer Georgina Spelvin.

Our story begins with despairing, lonely spinster Miss Jones slashing her wrists in a bathtub, after which she arrives in a sunny but eerily empty afterworld where the surveyor, Mr. Abaca (Clemens), tells her that she's doomed for the decision to take her own life. However, she also has the opportunities to indulge in all of the sensual pleasures she denied herself while alive, a chance she seizes with the 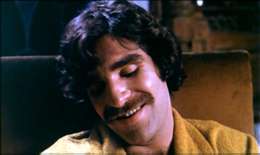 aid of a naughty instructor (Reems) and a wide variety of willing participants including various men, women, produce items, and even a snake. However, as the haunting finale proves, this path has its own problems as well...

A far better actress than your average porn starlet, Spelvin manages to carry the film with a strong performance ranging from meek despair to wild, glittering-eyed abandon. The decision to go with an older-than-average female lead instead of the usual fresh-out-of-high-school nymphet was a very smart one, and the rest of the film wisely strives to stay on her level. Spelvin went on to a number of other adult films (and even a few mainstream ones like Police Academy) and always gave it her best; just check out her hilarious turns in films like The Private Afternoons of Pamela Mann to see her impressive range. Her co-stars include a roster of familiar '70s faces including frequent lesbian-scene actress Judith Hamilton (as "Clair Lumiere") (whose scene is usually omitted from prints but has been restored on this release) and busy actors Marc Stevens and Levi Richards, whose three-way scene with Spelvin near the end of the film remains one of the most startling and intense of its kind. Undoubtedly realizing he was onto sometime special, Damiano wisely recruited a real composer, Alden Shuman, to compose a beautiful original score whose essential soundtrack release has almost always stayed in print over the past three decades. 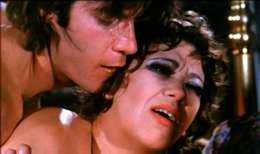 Though it's been a perennial bestseller on home video, The Devil in Miss Jones was treated miserably on DVD since the early '80s thanks to murky, often cut presentations and a simply incompetent initial DVD release that encoded each sequence as a separate film, causing the player to pause and often lock up between scenes while the timer restarted. Obviously the release from Media Blasters' Raincoat Theater (in conjunction with VCX) didn't have to work too hard to outdo its predecessors, but thankfully they've done this film proud with a transfer that's much easier on the eyes than any viewer would expect. The low budget still hampers the visuals somewhat (presumably the cheap film stock couldn't quite cope with the deep levels of black Damiano was going for in some scenes), but detail and color saturation are much better and more natural here than before. Some damage from the original element flickers through here and there (including a tiny pinhole that pops in and out through a couple of reels), but considering the rarity of any decent elements at all, fans should be very happy indeed. The audio can be played in either a 5.1 remix or the original mono; though the latter is probably best for purists, the 5.1 does a surprisingly solid job of enlarging the soundscape by channeling the music to the rear speakers and keeping the dialogue dead center. Not bad either way, really.

As if the upgraded transfer weren't enough, this edition manages to pack in enough extras for a two-disc edition. Disc one houses the main feature with an excellent Damiano commentary track, moderated by Casey Scott, who certainly knows his way around the block when it comes to drive-in and exploitation films. They cover pretty much everything you could possibly want to know about the making of the film, from the stories behind each of the actors (which emphasis placed on Spelvin, of course) to the identities and backstories of the various participants behind the camera. There's nothing as scary as Damiano's mob-related murmurings in Inside Deep Throat, thank goodness; this is strictly historically-based and a much-needed chapter in preserving the history of the golden age of adult cinema. Then Spelvin steps into the spotlight on disc two for a video interview in which the still-cheery actress talks about the making of the film, her initiation into the business, her stripping career, and recollections about her co-stars and director. She seems like "good folks" here, to be sure. The second disc is rounded out with a still gallery, the much-shortened 50-minute(!) cable version (which is still a lot stronger than what you'd expect to see today), and trailers for this film, Neon Nights, Babylon Pink, Debbie Does Dallas and Insatiable.