The first English-language film for director Polanski, star Deneuve, and co-writer Gerard Brach, this undisputed horror classic has lost little of its power to unnerve modern viewers. This is also the initial foray into Polanski's series of "apartment horrors" which continued with Rosemary's Baby, The Tenant, and less directly, The Pianist. Here the tortured protagonist is

Carole, a French girl who lives in London with her sister, Hélène (Yvonne Furneaux), and works in a beauty salon. Unlike her more sexually experienced sibling, Carole recoils from the touch of men and furiously brushes her teeth after an unwelcome kiss. With a raw rabbit left to be cooked still sitting fresh in the kitchen, Hélène decides to take off for a few days with her not-so-noble boyfriend, Michael (Hendry), whose amorous activities keep Carole awake at night. Left alone, the fragile beauty slowly goes to pieces... and those unlucky enough to enter the apartment during her breakdown encounter a very nasty surprise.

Part of the great horror upheaval of the 1960s, Repulsion was often compared at the time to its closest counterpart, Alfred Hitchcock's Psycho; however, Polanski's film has been more fortunate over the years in that, despite a few feeble attempts, it simply cannot be copied or sequelized. The inventive use of disorienting sound (on a par with Robert Wise's The Haunting)

is the perfect complement to the film's judicious mixture of slow, subtle chills (cracks splitting open the apartment walls, with hands eventually emerging from within) and sudden shocks (the much-touted razor scene, Carole's rape hallucination, the unforgettable wardrobe "jump"). Fresh off her success in The Umbrellas of Cherbourg, Deneuve is the perfect choice as Carole; even at her maddest (and most catatonic), she remains sympathetic thanks to those amazing, doe-like eyes. Extra kudos must also go to cinematographer Gilbert Taylor (Dr. Strangelove, The Omen), whose manipulation of cinematic space and distorting lenses is never less than masterful.

Despite its high profile status, Repulsion has had more than its share of substandard video transfers. Both of the no-frills American DVDs are a fuzzy mess and best avoided, pure and simple. The Japanese DVD (in English with optional Japanese subtitles) is passable, on par with Criterion's letterboxed laserdisc edition. An anamorphic upgrade first came from France courtesy of Studio Canal, while Anchor Bay took the same master and yielded even finer results for their UK release. Apart from some extremely mild scratches visible on the far right (especially during the first few minutes), the source material is in excellent shape with strong contrast levels, essential to enjoying the monochromatic imagery. Anchor Bay's decision to include DTS and 5.1 remixes in addition to the original

mono track actually makes sense here; while the film should be seen at least once with its original single-channel mix for the sake of historical purity, the surround mixes are extremely effective with deliberately aggressive surround use during the more horrific scenes. Everything from jangling telephones to thudding footsteps erupt back and forth between the speakers, resulting in an appropriately queasy sonic experience. The Anchor Bay disc is also the only version to include the audio commentary with Polanski and Deneuve (recorded separately) first released on the Criterion laser; it's an informative and candid discussion, with Polanski discussing many of the film's aspect which dissatisfy him now. Also included is a very informative 23-minute featurette, "A British Horror Film," produced by Blue Underground. Polanski gets the bulk of the screen time here, but he's also joined by Taylor, art director Seamus Flannery, and producer Gene Gutowski for a lively look at the film's genesis as one of the more controversial and acclaimed genre efforts in English cinema. (Curiously, the deliberately anti-erotic and mostly implied rape passages were responsible for numerous UK censorship hassles over the years, though the DVD is thankfully uncut.) Also included are a gallery of Flannery's designs, an interview with Eye and Brain author Professor Richard L. Gregory (one of Polanski's potential collaborators), and a fullscreen theatrical trailer.

One of the key films in the art house movement of the early '60s, this debut feature from Roman Polanski was largely responsible for establishing Polish cinema as a force to be reckoned with. Ironically, it also proved to be Polanski's only Polish feature, as subsequent projects took him throughout Europe and the U.S. Sort of a thematic cousin to Antonioni's L'Avventura, the film is less plot-driven and more focused on cinematic technique as an expression of character dynamics and a depiction of social order. Here we have a bourgeois couple, Andrzej (Niemczyk) and Krystyna (Umecka), who 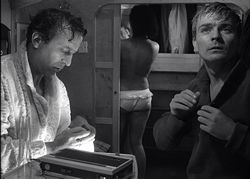 nearly run over a young blond man (Zygmunt Malanowicz) during an afternoon drive. The husband asks the youth to accompany them for a sailboat ride, and over the course of the next few hours, the men become involved in a power struggle for the apparently dissatisfied woman whose loyalty becomes increasingly ambiguous.

Images of sexuality and violence abound in Polanski's three-character nautical drama, though apart from a bit of discreet quasi-nudity, any overt sensationalism is avoided; the rippling water and the young man's beloved switchblade knife make it clear where the story is headed, and the cramped, effective compositions effectively draw attention to various points of dominance achieved by each character. The deliberately open-ended conclusion, later echoed in Adrian Lyne's Unfaithful (a Claude Chabrol remake until its final scene), is a haunting decision that left audiences tantalized upon the film's release; even now it's difficult to imagine any other way for the film to end. In a sense this established the first of many elliptical finales in the Polanski canon, from Cul-de-sac onward; likewise, the director's skewed sense of humour is well in evidence, particularly in Krystyna's reactions to the macho mind games being conducted for her benefit.

The first DVD release of Knife in the Water (Nóz w wodzie) came from Japan as part of a series with Repulsion and Cul-de-sac, films with which it forms a loose trilogy to be repeated elsewhere in the same format. The presentation in Polish with optional Japanese subtitles left something to be desired, so a tremendously improved master was commissioned and finally released, first through Studio Canal in France as part of a set with the same other two titles. However, that transfer was in Polish with optional French subtitles, leaving English viewers still frustrated. 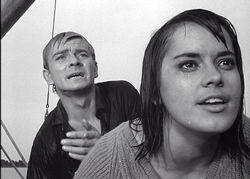 Virtually simultaneous English editions finally appeared in the US (Criterion) and the UK (Anchor Bay), though the differences between them are intriguing. Though taken from the same source, the Criterion transfer is visibly cleaner with less debris and digital noise; it also features smoother blacks. However, at Polanski's request, the viewer cannot fast-forward during the feature; if he and David Lynch ever collaborated on a DVD release, the results could be deadly. While the Criterion disc presents the original mono track, the Anchor Bay version adds surround remixes in DTS and 5.1; the results are extremely mixed, stretching the already thin audio recording past the breaking point with artificial rear channel projection that proves to be more of a distraction than an enhancement. (Their other Polanski remixes are considerably more natural, and relatively speaking, the DTS track is preferable.) The Criterion disc features a 27-minute featurette including exclusive Polanski interview footage alternating with a discussion with his co-writer, Jerry Skolimowski, who went on to direct the cult favorite Deep End. Though some historical context is offered, the documentary is mostly aesthetic with a detail breakdown of the rhythms and techniques used to achieve the creators' goals; for example, Skolimowski explains his decision to keep the dialogue to short, pity chunks during the entire film, and Polanski elaborates on his use of camera placement and editing to create what Polish officials denounced as an unworthy film. Meanwhile the Anchor Bay disc includes the completely different 30-minute "A Ticket to the West," featuring a different interview with Polanski as well as Niemczyk, Malanowicz, director Andrzej Wajda, and editor Halina Prugar-Ketling (but no Skolimowski). The first portion offers a portrait of Polish filmmaking at the time, offering a solid overview of just how radically different this was than the usual cinematic product during this period. We also learn a bit more about Polanski's film school days and the nervousness felt over his transition to feature films. Along with much political discussion, the documentary also contains some interesting technical revelations including the fact that Umecka, a non-actress, had to be completely dubbed by another actress in post-production. Both discs include extensive galleries culled from Polanski's 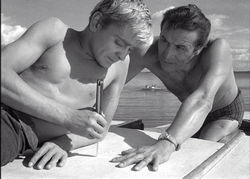 personal collection of behind-the-scenes photos; many of the rare shots here are astonishing as the actors and crew are seen preparing for some of the most memorable moments in the film.

The Criterion version contains a second disc representing eight Polanski short films, while the same shorts are available from Anchor Bay exclusively as a bonus fourth disc in their Roman Polanski Collection. The most famous titles here are the oft-screened "Two Men and a Wardrobe," "The Fat and the Lean" (or "The Fat Man and the Thin Man," as it's christened in the UK, with Polanski as the titular lean), and "The Mammals," all of them little surrealist gems in their own right. (The three were also included on Criterion's mammoth Repulsion laserdisc.) All of these are representative of Polanski's flair for off-kilter visual comedy, a trait he exploits far more than most critics seem to acknowledge. Also included are five more obscure titles, all of them worth watching; significantly, the absence of dialogue makes these among the more fascinating and universally appealing achievements in Polanski's early catalog. "Murder" begins like a Hitchcockian set up, with a man knifed in bed before a peculiar punchline. The more typical "Teeth Smile"/"Teethful Smile" follows a man spying through a bathroom window on his neighbors, again with a little twist. The bizarre "Break Up the Ball"/"Let's Break the Ball," a sort of rough draft for ideas later explored in The Fearless Vampire Killers, depicts an elaborate nocturnal dance disrupted by the arrival of a young gang. The stunning, 20-minute "When Angels Fall," perhaps the greatest discovery on the disc, contrasts stylish black and white footage of an elderly woman attending a crowded men's public urinal with color imagery of her Hollywood-style fantasies. In "The Lamp," a shop filled with toys and trinkets is demolished by fire, depicted in eerie detail similar to House of Wax. All of the shorts look quite good for their age (considering they're student films several decades old), and the mono soundtracks nicely represent the ambitious mixtures of sound effects and music, some by Polanski's regular collaborator, the late and lamented Krzysztof Komeda.