was dying down, the offbeat shocker Mortuary faced something of a dilemma. It's basically a stalk-and-slash film with a killer who looks like a cross between Captain Howdy from The Exorcist and Scream's Ghostface, but the demand for knife-wielding killers had resulted in severe audience burnout. Undaunted, the distributor (Film Ventures, which was doomed to collapse the next year) tried to pass it off as a zombie film complete with one of the most misleading trailers of all time, consisting of newly-shot footage of Michael Berryman in a graveyard. As if that weren't enough, it also turned out to be the final released film by actor Christopher George, shortly after his turn in the legendary Pieces. Oh, and you also get Bill Paxton in one of his earliest screen roles (including a giddy graveyard skipping scene that must be seen to be believed), and Mary Beth McDonough (wholesome star of TV's The Waltons) complete with a surprisingly convincing nude body double in two lengthy scenes.

So, is the movie itself good? Well, that's debatable, but it's definitely a lot of fun. After a slo-mo death scene in a swimming pool over the opening titles, the action really begins with two teens sneaking into a mortuary during the afternoon only to see some people having some sort of occult seance in the basement. One of them gets slaughtered by a black-cloaked psycho while the other, Greg (Humongous' Wallace), gets to live another day to roller skate and hang out with Christie (McDonough), daughter of the guy who got snuffed in the opening scene. Apparently Christie is still distraught by dad's death despite the comforting efforts of her mom (Lynda Day George, of course), and she's also the object of affection for young Paul (Paxton), who helps his embalmer father Hank (Christopher George) at that spooky mortuary. Then that creepy maniac

starts turning up, chasing Christie around the house at night and killing off people around her. 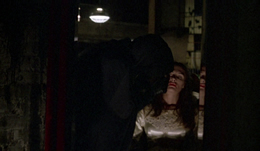 The actual identity of the killer isn't much of a surprise since the film shows him speaking and looking very recognizable despite his makeup around the one-hour mark, but Mortuary has other bonuses to compensate. Ridiculous dialogue, bizarre plotting, and lots of early '80s pop culture atmosphere set the stage at first, and the climax really takes a detour into bizarre territory complete with the killer conducting a macabre personal symphony straight out of Happy Birthday to Me and the craziest shock ending this side of, well, Pieces. On top of that you get a lyrical and surprisingly effective score by John Cacavas (Horror Express), and you're deep in cinematic guilty pleasure territory.

Like a lot of its '80s horror brethren, Mortuary found most viewers through its VHS release from Vestron in a pretty sorry-looking transfer. That striking (but again, totally misleading) cover art certainly helped, and it was wisely been carried over for Scorpion's 2012 release, the first official DVD in the world as well as the first time the film came back in circulation in decades. The new transfer from the internegative looks way, way, way better,

of course; it's colorful and crisp in ways the old tape couldn't convey at all. Of course, it's presented as part of the "Katarina's Nightmare Theatre" line, with the horror hostess Katarina Leigh Waters offering a few facts and figures about the film's stars and creators in optional wraparounds. Also included is the aforementioned trailer and a 14-minute video interview with Cacavas; yours truly conducted that one so I can't really critique it, but hopefully it'll prove interesting to film music fans. Finally the disc wraps up with bonus Katarina trailers including Death Ship, Don't Answer the Phone, The Return (with no onscreen text), Savage Streets, The Hearse, Terror, Satan's Slave, Double Exposure, and The Survivor.

Two years later, Scorpion revisited the title (which gained a notable cult following both due to the DVD release and love from a burgeoning legion of slasher fans and podcasts) as a Blu-ray edition. The expected HD source material looks even better here with all of its beautifully textured grain and overripe colors intact, not to mention beautifully rich black levels. Nice stuff. Waters' wraparounds are absent, but the Cacavas interview and trailer are here and accounted for. Another essential entry for your slasher Blu-ray collection.