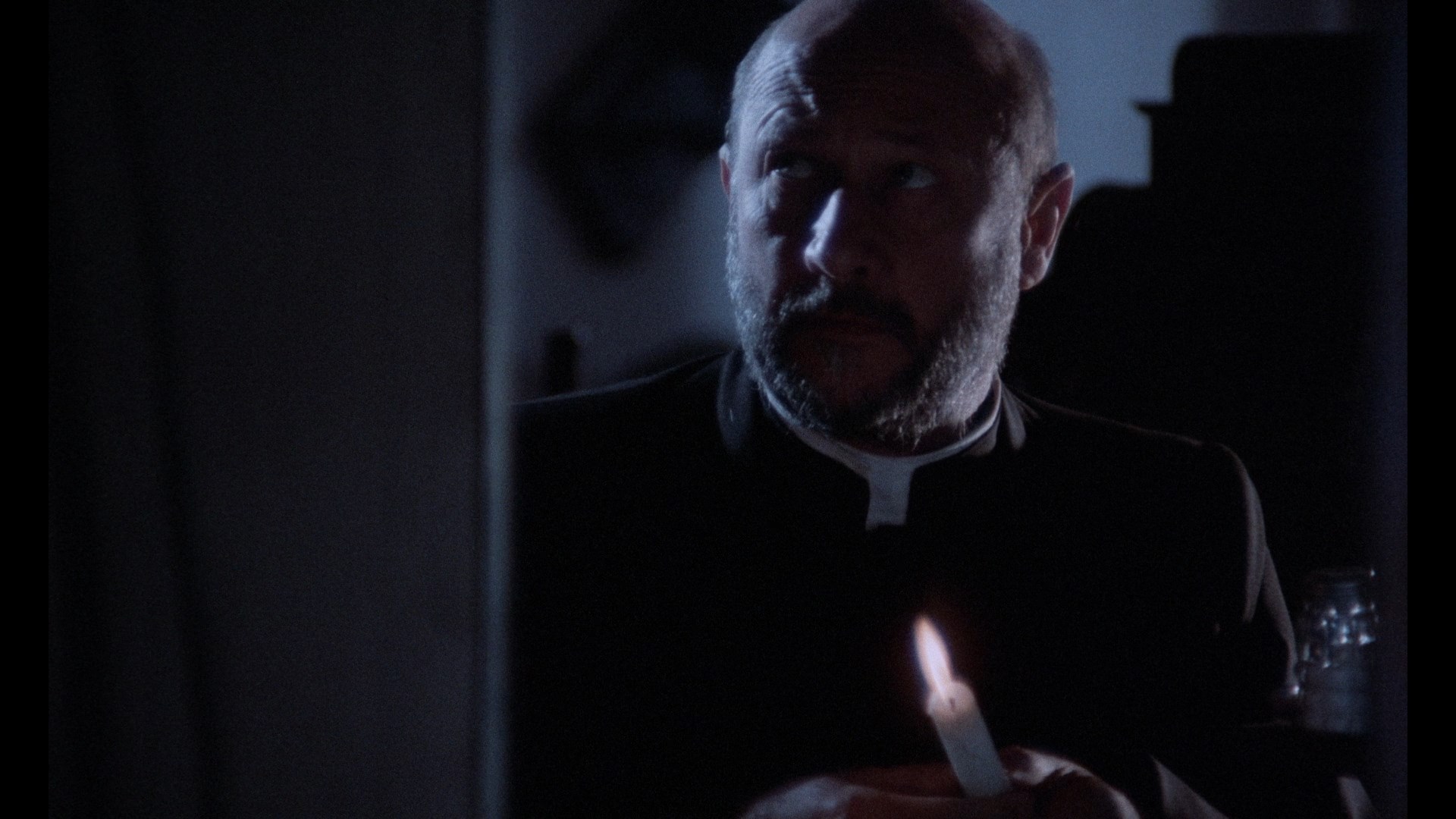 By the mid-'70s, it seemed almost every other horror film pouring out of a Western country besides America had either Christopher Lee, Peter Cushing, Donald Pleasence, or some combination of the three; no exception to this rule is the oddball Greek shocker, The Devil's Men (released in the U.S. in theaters and on home video from Crown International in truncated PG-rated form as Land of the Minotaur, which pits the latter two actors against each other in a barely disguised knockoff of The Devil Rides Out spiced up by its unusually scenic locations.

On a remote Greek island, young tourists are disappearing thanks to a secret cult devoted to the Minotaur, a beast whose smoke-breathing statue demands human sacrifices -- as seen in detail in the precredits sequence. The wily Baron Corofax (Cushing) is largely to blame for this situation, but when the latest fresh meat (including hot pants-wearing Peters) is next in line for the slaughter, Milo Kaye (Skouras) and fellow fighter of evil Father Roche (Pleasence) unite to put a stop to this mythical madness. 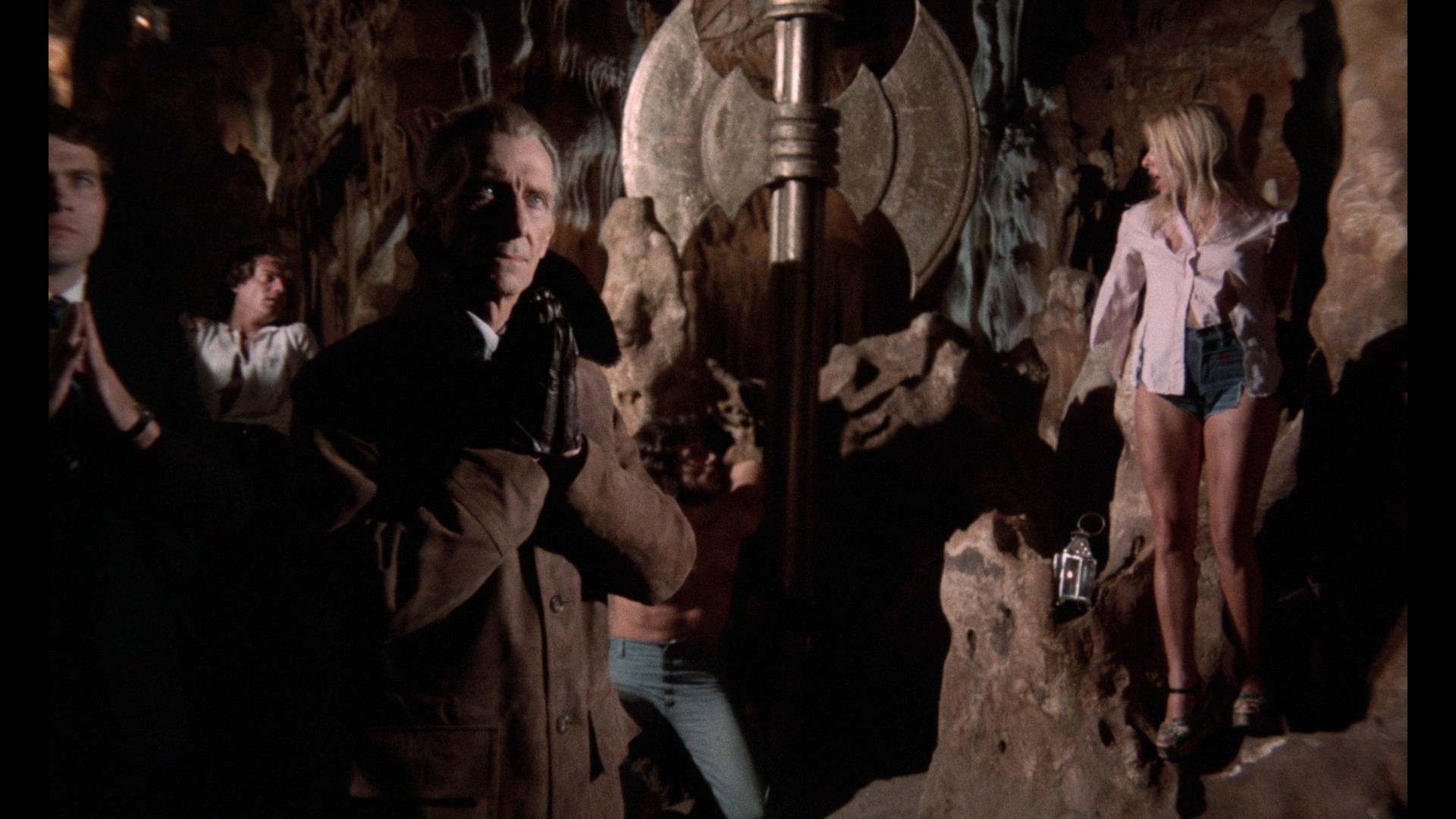 Though usually ranked in the lower tiers of '70s Euro horrors, The Devil's Men offers a few modest thrills during sequences of the hooded cultists stalking their prey. Of course, the pairing of Cushing and Pleasence is worth seeing, too, even if Cushing is given relatively little to do. One big plus is the eerie, potent music score by the legendary Brian Eno, which pumps in plenty of atmosphere even when the film itself comes up short. Then there's the catchy, insane funk song over the end credits, only found in the European version and nearly worth the price tag all by itself. It's not quite "The Green Slime," but it's darn close... and wouldja believe the credited singer is Paul Williams?

First released on DVD in Britain as part of DD's "Masters of Horror" collection under its original title (4:3 letterboxed), this film made its American DVD debut as Land of the Minotaur when presented by BCI in its shorter Crown cut, widescreen and anamorphically enhanced. The transfer seems to be taken from an okay print, though the contrast is a bit harsh and print damage is evident throughout with incredibly awful audio to boot.

A subsequent UK standalone release followed from Odeon, but the real one to go for is the double feature from Scorpion. Co-billed first on the BCI disc and then again on the Scorpion one is a significantly wilder and more blood-spattered title, the madcap witch romp Terror (another Crown release), directed by Norman J. Warren (Satan's Slave). Click here for more on that title, which has since been reissued from Vinegar Syndrome. The 2012 double bill from Scorpion improves right out of the gate with an uncut, anamorphic transfer of The Devil's Men correctly framed at 1.66:1. The film still isn't much of a visual dazzler, but the improvement is obvious and the extra little helpings of topless nudity and bloodshed help make it a much more lively experience than the TV-friendly slog most Americans have had to endure for decades. No real extras per se on that first film, but both titles are bookended with hosting sequences (and an intermission in between) featuring horror hostess Katarina Leigh Waters, which makes sense as this is part of her Katarina's Nightmare Theater line. Once again she's on her most comfortable turf here talking about British '70s horror (or in one case, British-Greek hybrid horror), and her enthusiasm makes for infectious viewing.