Married life isn't going so well for Marta (Jimskaia), a pouty blonde first seen rolling in the sack with her writer husband, Dario (Monella's Parodi). When he fails to satisfy her for the umpteenth time after he selfishly attends only to his own needs, she's forced to finish herself off when he's out of the room. What's a girl to do? Go to an art gallery, apparently, where she meets French stud Leon (Private's Marino), who's in town for a book festival in which his book company is participating. That night while a maestro of erotica (played by director Tinto Brass, of course) lectures the attendees on the difference between erotica and pornography,

Marta begins her elaborate deception involving hopping in bed with Leon, keeping a diary of her fantasies and indiscretions, and teaching her husband that some women just like to be taken by force and serviced appropriately rather than used as toys.

Dubious sexual politics aside, any viewer would know even without the credits that this is pure Tinto Brass territory right from the opening credits. The scenic shots of Mantua ("a sensual city," as Brass describes it) and plentiful frescoes give this a sleek veneer far different from your usual softcore effort, though the sex scenes are as plentiful and raunchy as any in the Brass canon (including a final scene that pushes the whole rubber phallus motif a lot further than usual). The story is nothing particularly

special here; the setup alone is basically a more explicit riff on the opening act of Brian De Palma's Dressed to Kill, though obviously with a very different punchline.

Thankfully there's plenty of Brass' signature humor here to keep things lively as Marta is actually a pretty unappealing heroine who comes off as more of a petulant, selfish brat than a neglected, sympathetic woman; sure, Ukranian actress Jimskaia (apparently an international gymnast and acrobat!) is fond of showing off her derriere and other assets as much as Brass' previous heroines, but eventually you just wish she'd figure out how to actually talk to her lover or her husband instead of prancing around playing passive-aggressive mind games. The whole cuckold fantasy that drives the film is also familiar Brass material, though this seems to be the first time he's used it to justify what amounts to marital rape (on both sides). If you can ignore that, the film satisfies on the flesh front with lots of wild, enthusiastic bedroom encounters shot and performed with the usual 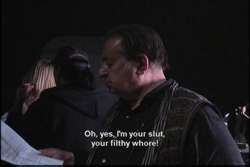 Brass verve. There's also a rather striking two-girl massage scene that fares well against the classic one from Emmanuelle 2 and, as usual, an elaborate beach fantasy scene with various actors getting down and dirty in the sand.

As with Cult Epics' past Tinto Brass releases, their DVD is a very respectable presentation that essentially carries over the same excellent transfer from the Italian Mondo DVD as well as the same extras, a theatrical trailer and a hilarious making-of featurette highlighted by Brass himself enthusiastically demonstrating various positions on all of the actors for the love scenes. While Private was Brass' first film shot in HD and seemed a little visually shaky compared to his past 35mm classics, Monamour reveals a considerable advance in capturing the same textures as his past work on celluloid. The optional English subtitles are included for the Italian audio (in 5.1 or 2.0 stereo); an English dub is also included but is best avoided because (a) it's terrible and (b) the track is frequently interrupted by loud, random bursts of static. This film is also available in a no-frills, non-anamorphic edition in the UK but is best avoided.

After a trio of exceptional Radley Metzger releases, Cult Epics also made Monamour their inaugural Tinto Brass Blu-Ray release. As expected, the image quality bumps up a few notches beyond the limitations of NTSC; again this is still digital video, so expect something more akin to a BBC TV Blu-Ray than, say, Camille 2000. That said it's colorful and crisp, only looking a little touch and go when Brass deliberately blows out the contrast on some of the exterior shots. Both the Italian and English tracks are carried over, with the latter sounding much cleaner even if the vocal performances themselves are, uh, lacking. The making-of and trailer are carried over in standard def, but the real incentive to upgrade here is actually a second Blu-Ray containing Brass' new "movie," Kick the Cock, which is basically a protracted short film (also included in their reissue of Monamour on DVD, but considering the minimal price difference, you might as well get it in HD). There's really no story here, just Tinto as a lech sitting in a kitchen watching a hot maid put on gloves, strip down, do racy things with available vegetables, and generally show off. The funniest thing here is when Tinto becomes a peeping tom outside, sporting the most ridiculously oversized fake phallus in his entire filmography. Sure, it's basically a glorified Playboy video in terms of content, but Brass' typical striking framing and quirky sense of humor put it a cut above your average cable fare. Extras include "The Making of Kick the Cock" (short and about what you'd expect), "Comic Strip" by Franco Saudelli (a pretty kinky three-minute short), footage from the Venice Film Festival Premiere with Brass in attendance, the trailer, and "Spanish Dance" by Angelita Franco (a club strip routine by the film's star with a rose in her teeth and little else on).