Following the scandalous release of Caligula, Italian erotica auteur Tinto Brass has been completely ignored in the United States, presumably due to his increasingly personal cinematic odes to the female derriere. Hard to believe, but Brass was at one time held in relatively high esteem as a pioneering director thanks to such stylish fare as Nerosubianco and L'Urlo. However, all that began to change in 1975 with the release of the opulent and shocking Salon Kitty, an explicit riff on Luchino Visconti's The Damned starring Helmut Berger as a Nazi entangled in all manner of sexual depravity. His notorious Caligula assignment led to a string of saucy European romps continuing to this day, in which the director himself often makes at least a lecherous cameo appearance as he turns his camera to a seemingly endless parade of European beauties.

Miranda, Brass' 1985 follow-up to his comeback film The Key, pushed his boundaries just up to the verge of hardcore without losing any of the director's trademark compositions. Top-heavy Serena Grandi (The Grim Reaper, Lambero Bava's Delirium) stars in the title role as a lusty tavern owner carrying on an affair with the local village stud (Andrea Occhipinti of New York Ripper / A Blade in the Dark fame), all the while scouting around for a suitable lifetime mate. Among her conquests are a 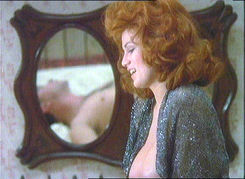 middle aged politician, Norman (Andy J. Forrest), and a visiting American soldier with peculiar outdoor bathroom habits. Meanwhile she uses her wiles to torment her sexually frustrated waiter/bartender, Carlo (Franco Branciaroli), and must eventually decide with whom she will spend the rest of her life. One of Brass' wittiest films, Miranda benefits from a sharp, pun-laden script lifted from a farcical Carlo Collodi play. Meanwhile, Grandi lets loose with a completely uninhibited performance, her look changing from one sequence to the next in an amazing succession of glamorous, sexy set pieces. The cropped, full frame British DVD from Arrow is plagued by distracting compression artifacts and pale contrast; however, the film is completely intact (including some shots that must have flickered by when the BBFC wasn't looking) and includes both the trailer and the aforementioned Brass interview. However, the same extras can be found on the U.S. disc in not one but two 16:9 transfers, which restore important peripheral information and generally look much crisper. All contain the English dubbed version. Both 16:9 versions bear the same catalog number from Cult Epics, but the second one contained in the Tinto Brass Collection box set is a significant improvement with far fewer compression issues and better black levels.

With Frivolous Lola (Monella), Brass was back to more familiar territory with what amounts to a sillier '50s spin on Miranda. Cute young Lola (Anna Ammirati) speeds around the Italian countryside on her bicycle, often flashing her fanny for the passing clergy and attracting the attention of randy young men along the way. She entertains a group of soldiers to a jukebox dance (one of Brass' most memorable scenes), accompanied all the way by another jaunty, pop-flavored Donaggio score. Here Brass reels back a bit from the more hardcore direction of his past two films, focusing more on his heroine's public flashing and the sexual playfulness of the various characters. The provincial Italian setting is vividly rendered, with the community frequently gathering to celebrate life, love, and food, a spectacle that will leave viewers feeling more than a tad bloated. The letterboxed transfer on this Dutch DVD looks good despite the low budget origins, while the stereo soundtrack is more ambitious than usual, spreading out both Donaggio's score and ambient sound effects to the rear speakers. The English dubbing is much worse than usual, however, making the absence of the Italian track especially irritating. As such, English-speaking fans will fare better with the Cult Epics disc, which offers the Italian track with English subtitles as well as a longer director's cut complete with jolting material including frontal nudity of male star Max Parodi and a graphic scene of Ammirati relieiving herself outdoors.