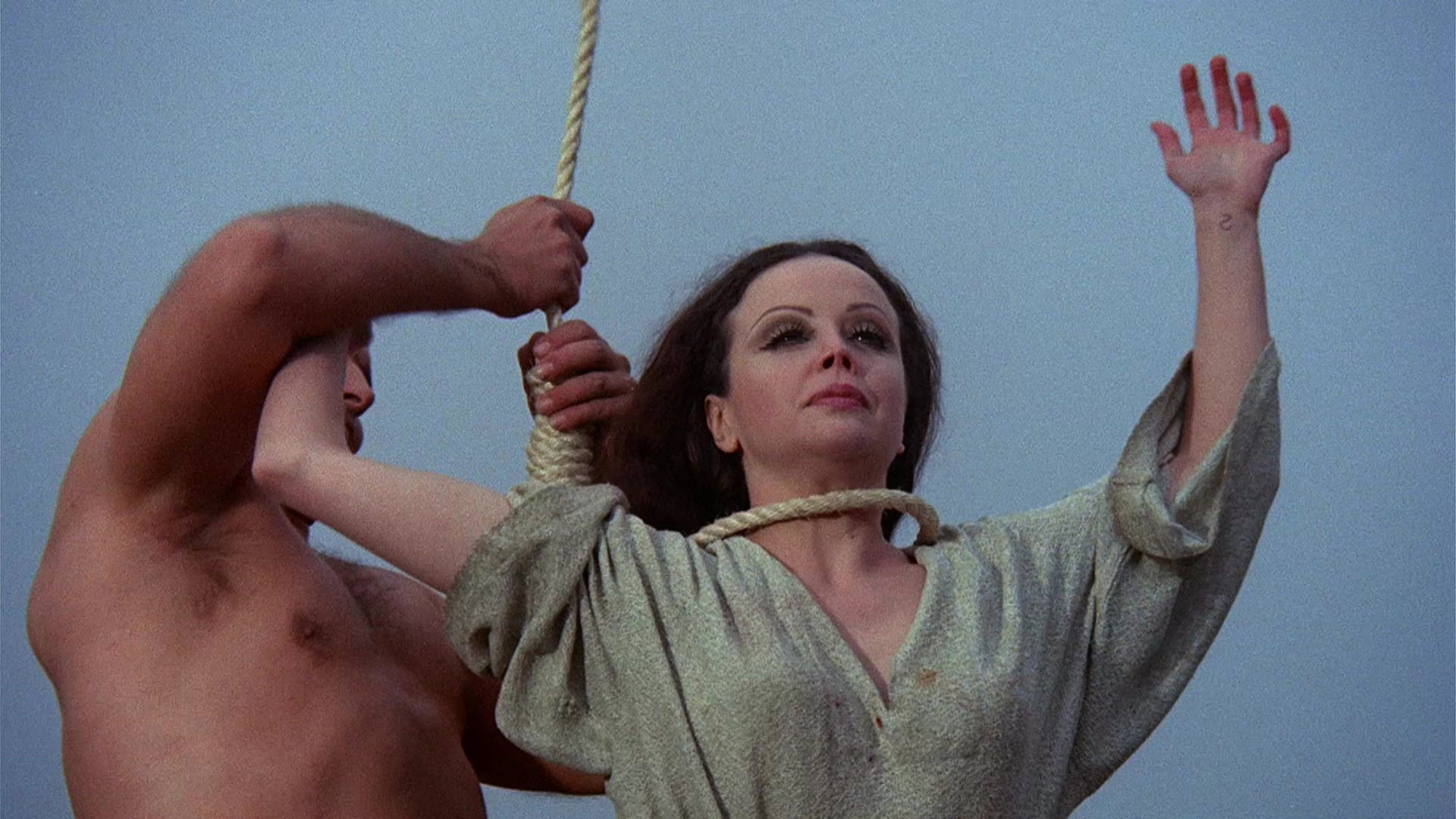 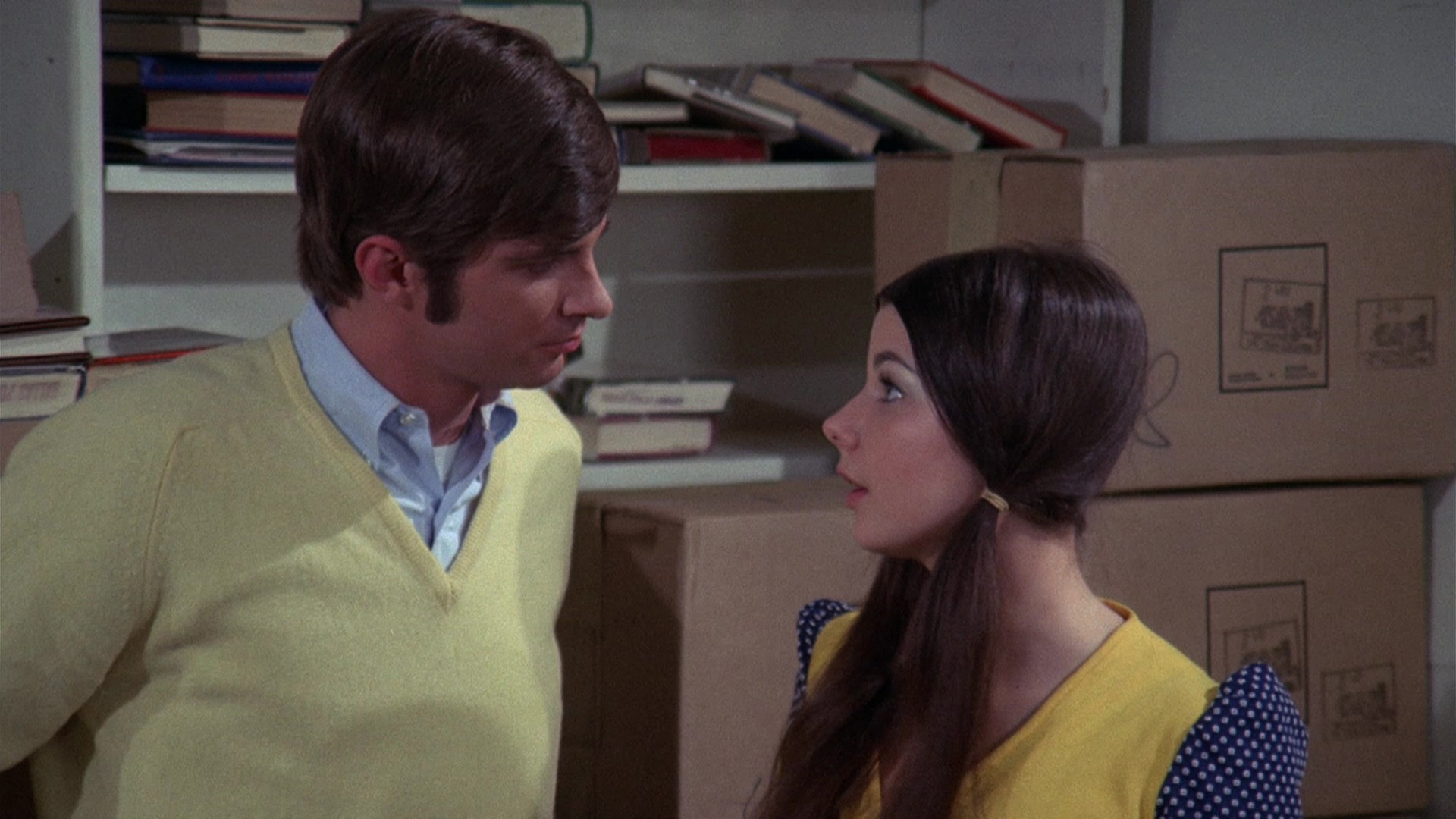 While schlock guru Larry Buchanan was the king of Texas drive-in fare in the 1960s, the following decade saw a significant uptick in the Lone Star State's horror output, most notably with a certain chainsaw-oriented classic by Tobe Hooper. Sandwiched somewhere in between is the mostly forgotten horror oddity Mark of the Witch, a Dallas-shot cheapie obviously inspired by Black Sunday and Horror Hotel -- right down to imitating their opening scenes with a nasty witch cursing the descendants of her persecutors, though this time it's the most long-winded and unintentionally hilarious version imaginable. This time the witch is Margery of Jourdemain (Santell), who's apparently a satanist as well and given to marking the hands of her followers with an occult symbol, and the object of her wrath is Macintyre Stuart (Elston), one of her followers and a town official who turned her in to the hangman's noose. Flash forward centuries later to a college town where perky Jill (Walsh, who also wrote the interminable main titles ditty) comes across a mysterious red book at a university bookstore. One of the pages in the tome offers instructions on how to summon a witch (involving a bunch of candles, some wine, and rosemary), so she and her pals decide to get together that night and act it out. At first the ritual seems to be a failure, but as Jill quickly reveals to her professor (Elston again), she is now possessed by the wicked Margery and intent on filling out her supernatural vendetta. Will the prof and Jill's sweater-wearing boyfriend (Wells) be able to stop the fiend as she starts bumping off other students in her evil quest?

Originally released with a PG rating in drive-ins around the country (most often in the South), Mark of the Witch will never win any awards for acting (the pretty but clearly limited Walsh seems to have some 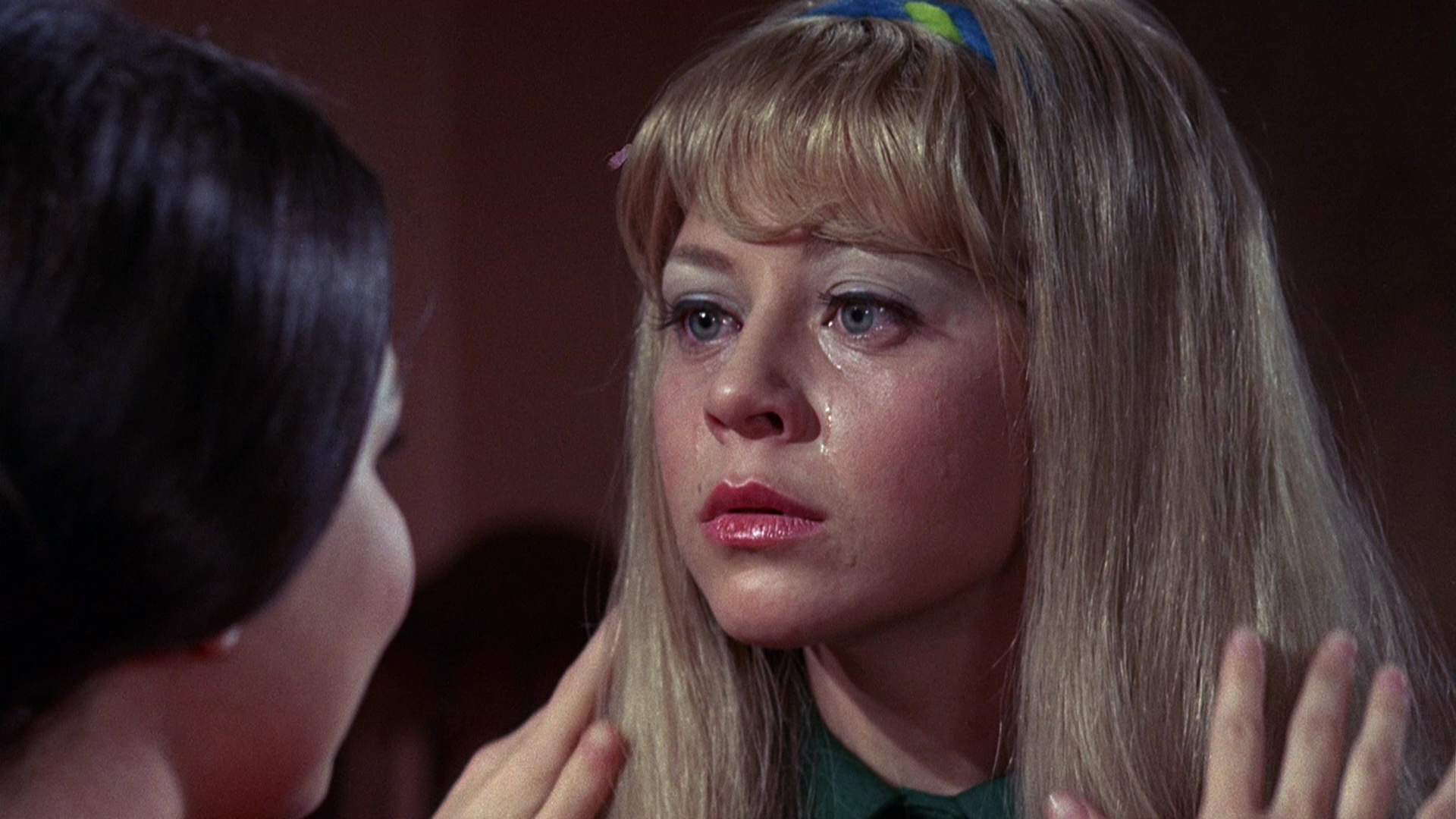 trouble keeping her characters straight throughout), but it's a lively and entertaining slice of hokum that really picks up steam in its second half, culminating in a nicely trippy climax with a time-hopping twist ending thrown in for good measure. Director Tom Moore (who went on to direct Return to Boggy Creek and a long, prolific TV career) pretty much 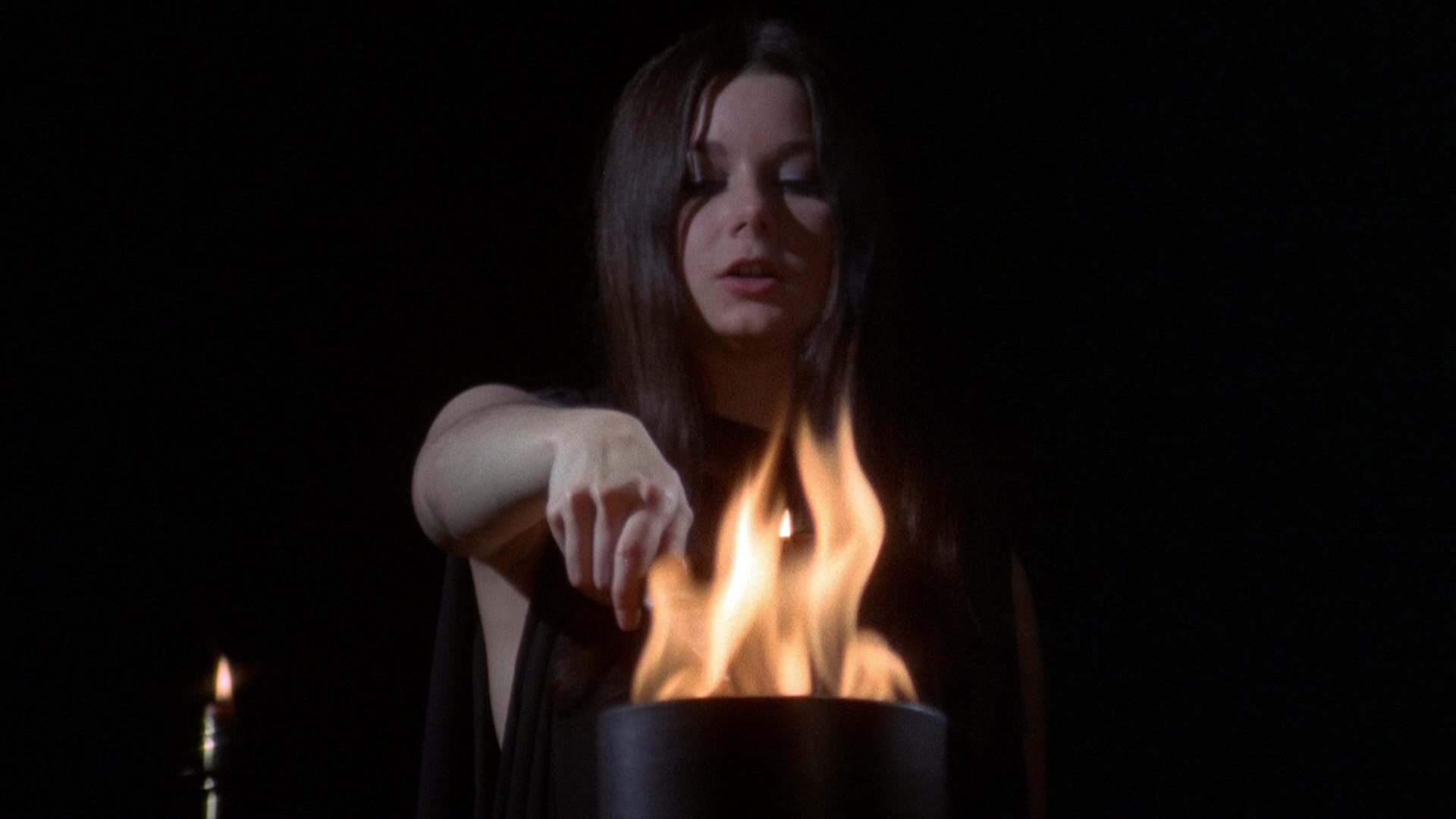 sticks to the H.G. Lewis school of filmmaking, with 90% of the film in static medium shots. However, the punchy colors, dubious art direction, and nutty plot turns still make it a cut above the average supernatural potboiler.

The first DVD of Mark of the Witch arrived from Retromedia paired up with the Florida cheapie The Brides Wore Blood in its theatrical PG-rated version. The print used was acceptable but incredibly splicy and dirty, though the widescreen 1.66:1 framing looks about right. Most horror collectors obviously assumed that would be the last word for this title in the digital age, but Code Red has resuscitated it in much finer form as part of an "Evil Teen Horror" double feature under the Exploitation Cinema banner once used by the now-defunct BCI. This transfer from the original camera negative is actually the pre-release version slapped with an R rating, mainly for some shots in Walsh's mid-film nocturnal ritual in the woods which now finds her ripping off her top and writhing around on the ground (probably a body double, but everyone will pretend it isn't). Image quality is much better all around, with only very minimal damage on display and much richer colors and detail. Just the uncut status alone makes this a substantial double dip, but the added resolution sweetens the deal. The only quibble is the fact that the 1.78:1 framing horizontally squeezes the image slightly to fit the frame (so everyone looks a tiny bit fatter); if you can adjust the XY scaling on your TV, it comes in very handy here. 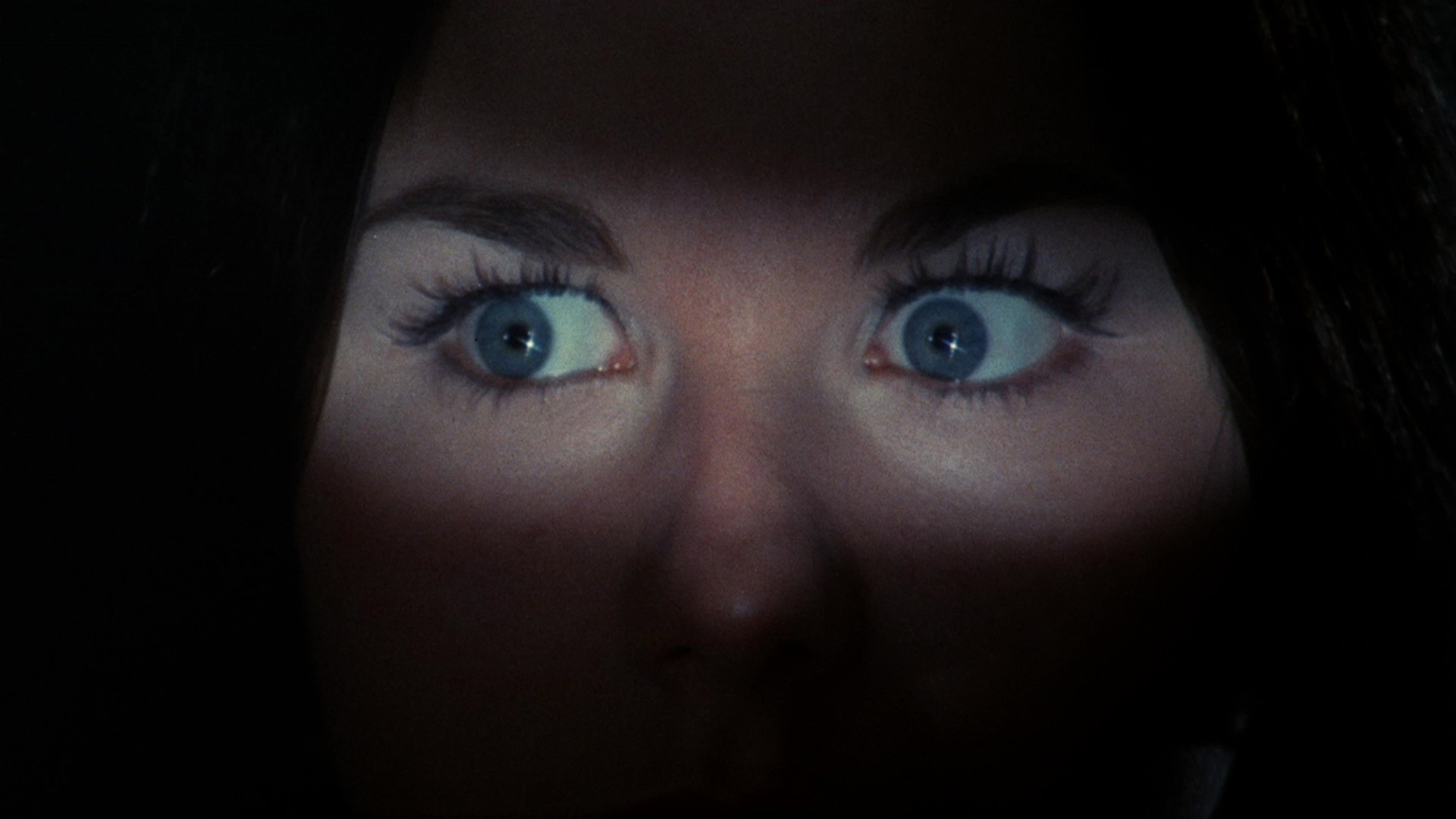 The Code Red version released on DVD in 2009 is a double-billed with Devil Times Five, a title previously released by Code Red as a standalone special edition (click here for more details) and which also features prominent plus for Budweiser Beer, oddly enough. However, the transfer here is completely different (it has the replaced Devil Times Five reissue title card instead of the Horrible House on the Hill one present on the first release) and presented open matte, which means a lot more, generally extraneous picture information at the top and bottom of the frame. However, picture quality is noticeably inferior (it looks sourced from an older tape source) and the audio is much hissier, so anyone who has the first release would be well-advised to hang on it and just regard the open matte edition here as an interesting variant. Extras here include the trailer for Mark of the Witch and additional trailers for other titles including Caged Men (under the title I'm Going to Get You... Elliot Boy), The Unseen, Beyond the Door, Nightmare, The Weekend Murders, and Dr. Black and Mr. Hyde.

The same excellent quality negative was revisited for Code Red's 2016 Blu-ray release, and it looks pretty perfect from start to finish with startling clarity and that bold, brash color scheme that seemed to really go wild with '70s film stock. The DTS-HD MA English mono audio is also extremely strong with lots of presence, though there hasn't been any filtering applied and you can hear some minor analog hiss at times. Only the trailer for the main feature is carried over this time, and as far as double dips go, it's hard to imagine how this could possibly look better at home.