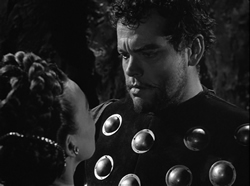 Combining Hollywood's most perpetually jinxed genius with the most infamous "cursed" play of all time might sound like trouble just waiting to happen, and for several decades a 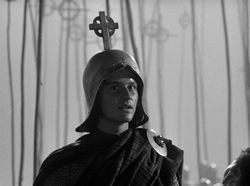 t least, that's exactly what happened when Orson Welles decided to bring William Shakespeare's Macbeth -- a play he already knew well from radio and theater productions -- to the big screen as his third credited feature after Citizen Kane, The Magnificent Ambersons, and The Stranger (and fourth if you count what remained of The Lady from Shanghai). Welles' dark, oppressive, stylized version of "the Scottish play" went so far as to have the actors adopt strong Scottish brogues, which confused preview audiences so much the film was pulled, redubbed, and hacked down by nearly 20 minutes for general release from Republic Pictures. A restoration of Welles' original cut in the early '80s came at just the right time as enthusiasm for the director was reaching a fever pitch, with his mistreated Touch of Evil and another, later stab at Shakespeare, Othello, also about to undergo major restoration and reappraisal.

For the uninitiated, Macbeth is one of the simplest and most violent of Shakespeare's tragedies as it charts the downfall of the ambitious title character (Welles), the Thane of Glamis, and his manip 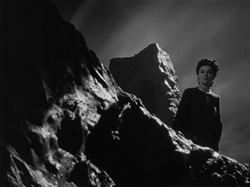 ulative wife, Lady Macbeth (Nolan), after he receives a prophecy from three witches that he will become "King hereafter." Macbeth, his wife, and his companion Banquo (Barrier) go to stay at the castle of King Duncan (Sanford), whom Macbeth murders at night thanks to the urging of his wife after drugging two of the guards. However, hallucinations and a guilty conscience complicate the couple's bloody rise to power, with more bloodshed soon to come. 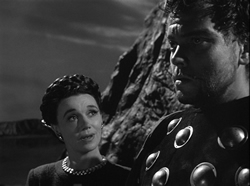 The closest thing to a horror film in Welles' directorial credits (followed perhaps by The Trial and Touch of Evil), Macbeth had the extreme misfortune of opening the same year Laurence Olivier directed and starred in a much more lauded version of Hamlet, which went on to take home an armload of Oscars. Welles was perceived as a risky investment, an uncontrollable, indulgent kid who got lucky with his debut feature and, for this film, made himself the center of almost every scene and composition (which, technically speaking, is actually true). The sparse, theatrical affectations like artificial backdrops and ragged-looking crowns didn't really help matters (thanks to major budgetary limitations), though today they're easier to take as signs of deliberate artifice after decades of directors like Kenneth Anger and his ilk. 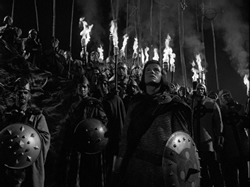 For TV fans it's especially fascinating here to see Jeanette Nolan (the voice of Norman's mother in Psycho) in her debut role, which she would follow with The Big Heat and colorful, sinister crone characters on shows like Thriller, The Twilight Zone, and Alfred Hitchcock Presents. Fortunately the rocky reception of Welles' Macbeth didn't deter other filmmakers, with several more versions to follow including a violent Akira Kurosawa adaptation, Throne of Blood. Roman Polanski's 1971 version will probably remain the definitive adaptation for a very long time, but the Welles version is perhaps the most admirable and has thankfully become much more respected with each successive generation of movie lovers.

Despite its signficant pedigree now, Macbeth has only been available on home video in brief fits and starts since the VHS debut of the restored version in the '80s. Image issued it on laserdisc as well in 1993, after which the film went the way of much of the Republic library and stayed off the DVD market (at least in the U.S.) until the 2012 release from Olive Films, on both Blu-Ray and DVD. The HD transfer from the UCLA film restoration is significantly better than the old master created back in the '80s, obviously, with far richer black levels and better contrast as well as much sharper detail. It's still a very dark, grungy film in many respects with some unavoidable damage during some of the restored footage, but Welles fans should get a big kick out of seeing it look this good.