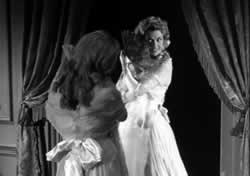 During the initial wave of television's rise to popularity, anthology shows offered a tremendously popular and efficient way of delivering series entertainment to the public. Rather than sticking with one storyline and a set cast of characters, anthologies could shoot multiple episodes at a time with different crews, writers, directors, and performers. Of course, this also turned out to be a boon to horror and sci-fi fans who found plenty of spooky chills with One Step Beyond and The Twilight Zone, both of which began airing in 1959. Meanwhile Alfred Hitchcock Presents had been offering tense, non-supernatural tales since 1955, but the Master of Suspense began swerving into more overt territory with his taboo-smashing 1960 film, Psycho. 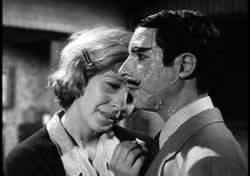 That same year, another anthology appeared on NBC entitled Thriller. Hosted by horror legend Boris Karloff, it began as an hour-long suspense program for its first six episodes, but with the seventh, "The Purple Room" (shot at the same house used in Psycho), the tone began to change thanks to a jolting mid-episode shock that became the talk of schoolyards and water coolers the next day. Thing settled back into standard suspense mode for another seven episodes or so, all of them well above average but hardly terrifying, until the series took a severe 90-degree turn with "The Cheaters," an overt supernatural yarn about a pair of glasses which enable the wearer to see the true nature of anyone around them. Just be careful you don't take a peek into a mirror... The chilling make-up jobs, riveting pacing, and ingenious plot (adapted from a story by Psycho author Robert Bloch, soon to become a familiar name on several episodes) made it an instant classic and kicked off a string of wildly unpredictable horror tales that made it an instant favorite among young, horror-hungry viewers. Karloff's deliciously dramatic introductions kept the show's tone consistent, and he even appeared in a few episodes including "The Prediction," "The Last of the Somervilles," "Dialogues with Death," "The Premature Burial," and the fondly-remembred "The Incredible Doktor Markesan," in which he portrayed a sinister recluse whose newly married nephew (Bewitched's Dick York) becomes entangled in a grisly secret involving 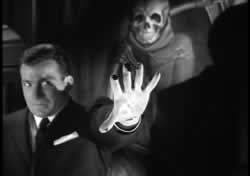 the reanimation of the dead, culminating in a nasty kicker of an ending. All told, Thriller ran for two seasons and racked up an impressive 67 episodes before it was taken off the air, with rumors swirling that a testy Alfred Hitchcock used his weight at NBC to have it pulled. Not so coincidentally, Hitchcock immediately changed his show to The Alfred Hitchcock Hour, which expanded the running time of his episodes and injected a very heavy dose of Thriller-style supernatural mayhem. This scary variant (which yielded such classics as "The Jar," "An Unlocked Window," and "The Magic Shop") was much stronger than Presents and has sadly never gotten an official video release of any kind of America, but one can only hope NBC will let it out of the vaults at some point.

Despite its relatively brief lifespan and spotty syndication history (most prominently airing on the Sci-Fi Channel during its early days), Thriller survived thanks to years of VHS trading on fan convention scene and enthusiastic word of mouth from fans like Stephen King. Several of its stories were later remade, with Bloch's "The Weird Tailor" (featuring what might be Thriller's scariest ending) later appearing in greatly diluted form as an entry in the otherwise excellent Amicus anthology film, Asylum, while "Waxworks" was greatly reworked for another Amicus film, The House that Dripped Blood. A strong adaptation of the Cornell Woolrich short story, "Guillotine," was also revived in the early '80s for another short-lived but often very scary NBC series, Darkroom, while "The Hollow Watcher" (featuring a strangely wussy Warren Oates) introduced the screen's first murderous scarecrow, a device later used more famously in Dark Night of the Scarecrow and Jeepers Creepers 2 among many others. 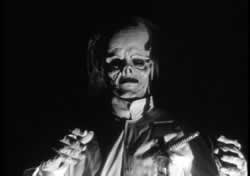 However, Thriller's most indelible stories have largely remained untouched, for better or worse. There are many surprises in store here along with quite a few unexpected guest actors (John Carradine, Rip Torn, Mary Tyler Moore, Leslie Nielsen, and Cloris Leachman, to name just a few), though William Shatner (a veteran from two stellar Twilight Zone episodes) takes top guest honors with two of the strongest entires, "The Hungry Glass" (about two couples terrorized by a ghostly presence in a room full of mirrors at a recently purchased seaside home) and one of Bloch's most deliciously enjoyable stories, "The Grim Reaper," in which a concerned nephew (Shatner) tries to convince his mystery novelist aunt (Gilligan's Island's Natalie Schafer) that her recently purchased painting of the title figure carries a very malignant curse. Perhaps the best remembered episode of the entire series is "Pigeons from Hell," an atmospheric bit of Louisiana gothic about two boys who spend a terrifying night in an abandoned mansion and the macabre fallout that ensues; its opening 12 minutes are its primarily legacy, offering a compact and deeply chilling opening act with one hell of a capper before it settles into more traditional territory. Other highlights include "A Wig for Miss Devore" (about an actress who dons the title accessory with career-enhancing 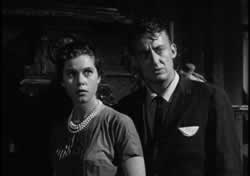 but grisly results), "Masquerade" (a silly but entertaining bit of Halloween fun with Elizabeth Montgomery and Tom Poston as a couple spending a unique evening in a haunted house), and "La Strega" (with Ursuala Andress as a gorgeous Italian woman on the run from her sorceress grandmother). Sure, there are a few duds (especially the inexplicably acclaimed "The Storm," which has aged pretty badly and now just comes across as completely pointless), but the show has a much higher batting average than most of its peers and certainly justifies the fervent fan following it enjoys today. What's also surprising now is how relentlessly downbeat and even savage it is, offering delivering uncompromising endings that could give the sadistic pranksters at E.C. Comics a run for their money. For example, "The Prisoner in the Mirror" closes on such a bleak, nasty note it's hard to believe the TV censors actually let it slip through.

The home video history of Thriller has been maddening for its fans since the VHS era, when Universal tested the waters with a tiny smattering of random episodes issued on VHS and laserdisc before abandoning any further plans. A subsequent run on tape through Time-Life's subscription service also proved to be short-lived, never coming close to covering the entire series. Bootleg copies from substandard TV broadcasts were the only refuge for years, but the first complete, official release of the show from Image Entertainment follows the precedent of their Twilight Zone sets with an avalanche of special features. Video extras include a fun syndication pitch with 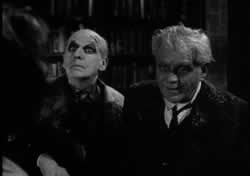 Karloff hyping the show to potential buyers, several promotional bumpers for upcoming episodes, and a hefty batch of stills including some wild behind-the-scenes shots and some rare color views of Karloff during the show's run. However, the real meat lies in the extensive 27 audio commentaries, with "La Strega" receiving two commentaries alone. Some of the original talent are here (Arthur Hiller, Patricia Barry, Richard Anderson, Beverly Washburn), while subjects ranging from NBC's make-up department to the wild music scores get the spotlight in other chat tracks, which feature a wide range of participants including Craig Reardon, Tim Lucas, Ernest Dickerson, John Burlingame, David Schow, Ron Borst, Gary Gerani, disc producer Steve Mitchell, Alan Brennert, and Larry Blamire. Considering how many of the show's original participants are deceased, there's a huge wealth of valuable material here as well as some hearty laughs along the way. The episodes themselves obviously look much better than past versions on broadcast or video; the quality is comparable with NBC's Night Gallery releases, i.e., obviously remastered and pretty darn good overall. Some chroma noise seeps into a handful of episodes (notably "The Last of the Somervilles," "Waxworks," and "The Return of Andrew Bentley"), so you may want to turn the color on your set way down to get the original spooky monochromatic effect. Another nice audio bonus here is the inclusion of all of Jerry Goldsmith's exceptional work as composer on the show as separate music and effects tracks, as well as many of the contributions by Morton Stevens. (Pete Rugolo's work is largely available separately on CD without any sound effects, so the absence here isn't as significant as you might think.) Most of the music is actually left unmolested by any sound effects, so soundtrack buffs should be thrilled to finally savor all this music without any intrusive dialogue if they so desire. Definitely one of the DVD format's most worthwhile Halloween releases, this is a show definitely worth discovering for any self-respecting horror fan who wants to see experience network television's first real horror series, which in many respects has yet to be surpassed.

Want more Thriller? Be sure to check out the wildly entertaining blog, A Thriller a Day.