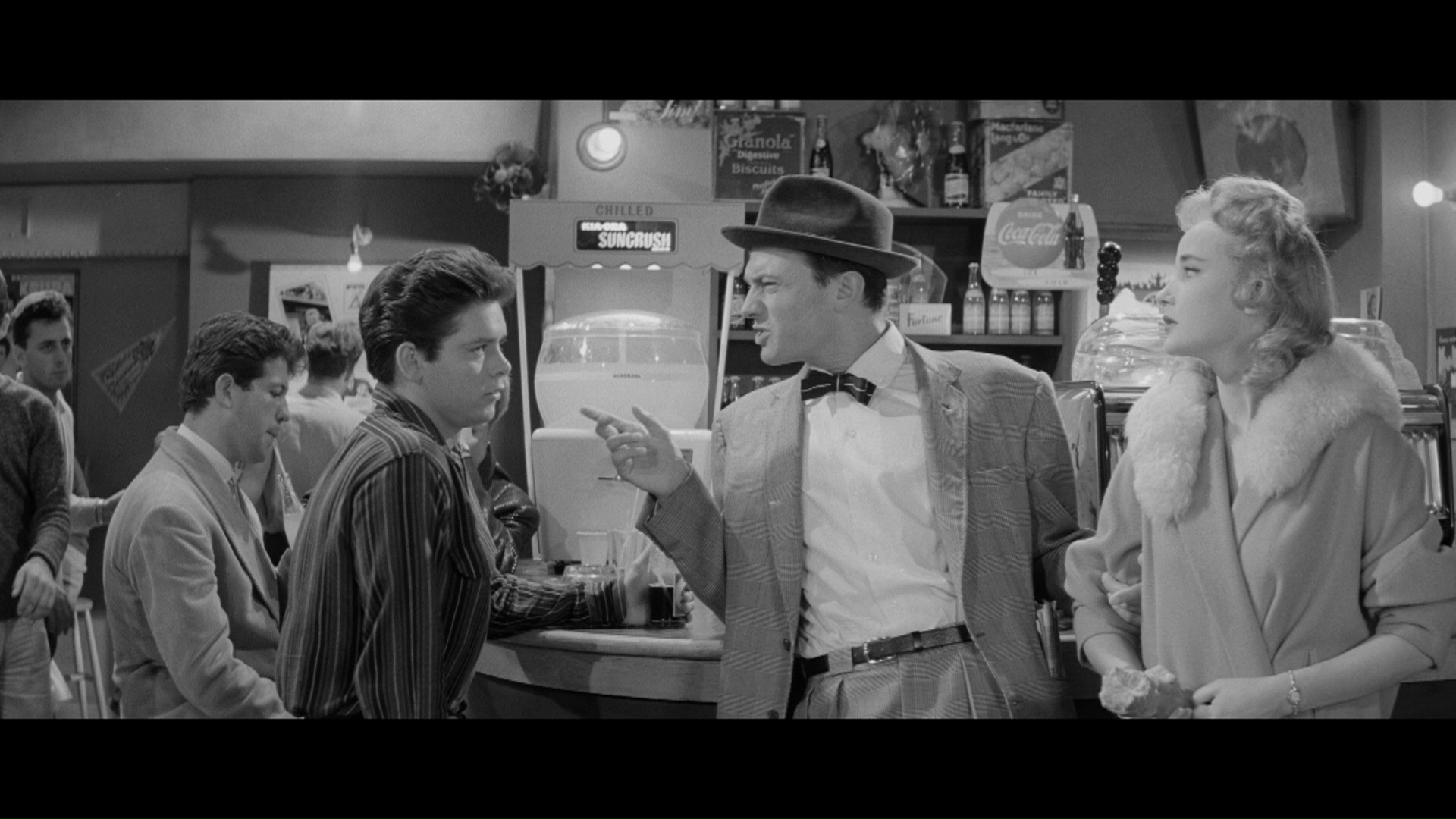 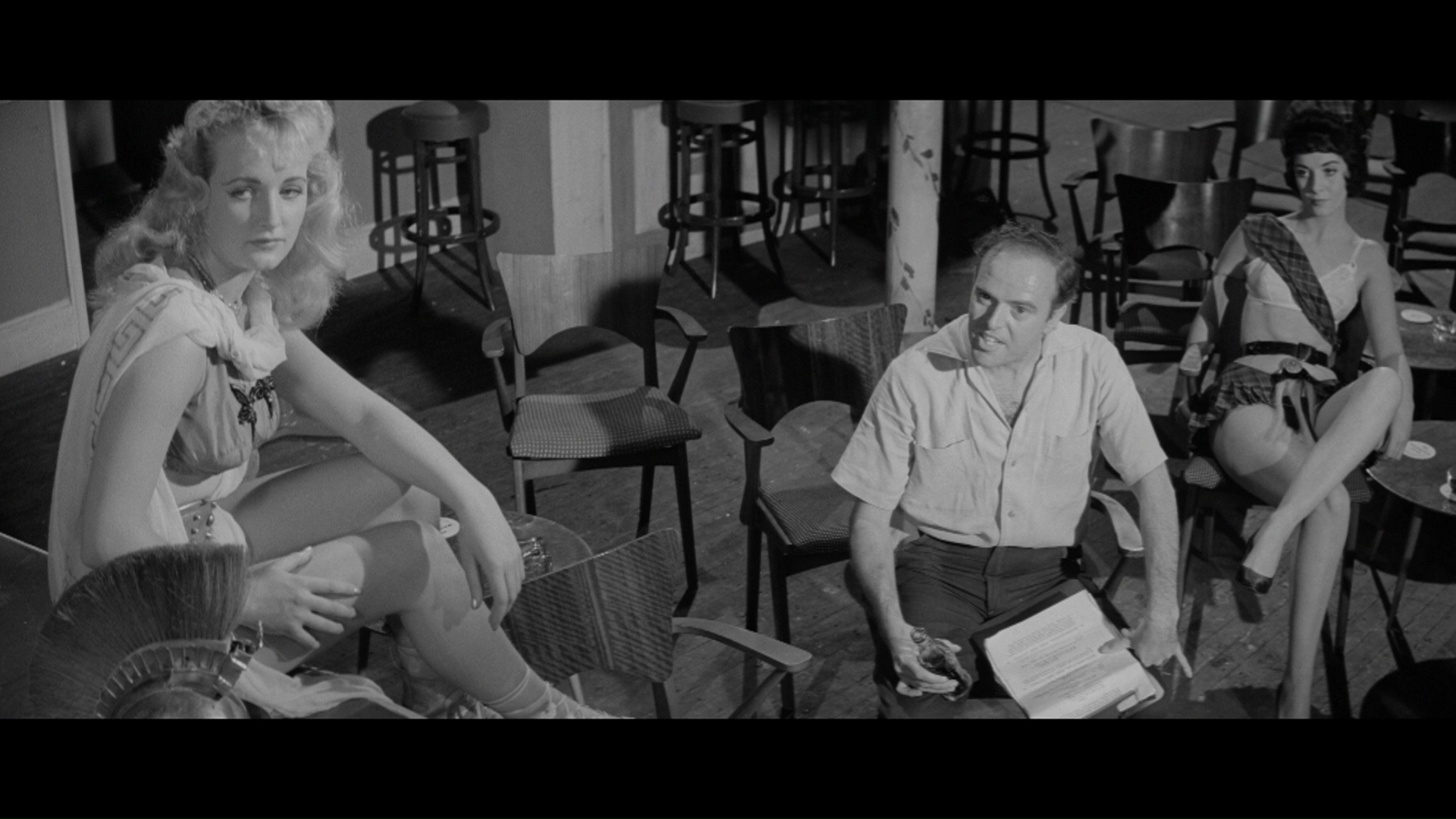 This fascinating mash up of teen musical romp and T&A burlesque film was a cult item awaiting rediscovery outside of the UK, where it enjoyed a more high profile reputation due to the presence of a very young and already popular Cliff Richard (who went on to become a famous singer of both pop and Christian music). It's still a little strange seeing a very boyish Richard stuck in the middle of a story peppered with random burlesque routines involving women in pasties and little more, but it's certainly tamer by today's standards than when it came out.

Sporting an unflattering haircut and a sort-of-cockney accent, Laurence Harvey (who appeared in the Oscar-winning drama Room at the Top the same year) stars as Johnny Jackson, a fast-talking talent agent and all-around hustler who frequents the gentlemen's clubs of Soho and enjoys a rapport with all of the showgirls, including his semi-girlfriend Maisie (Syms) whom he refuses to marry. He realizes he's found a winner in the form of bongo player Bert Rudge, a kid he christens with the stage name of Bongo Herbert and pushes as a pop singer in the local coffee bars. Bongo becomes a pop culture sensation, of course, but Johnny's hubris eventually proves to be his undoing.

Cult movie fans may be most surprised to see this was directed by genre-hopping filmmaker Val Guest, who was best known to 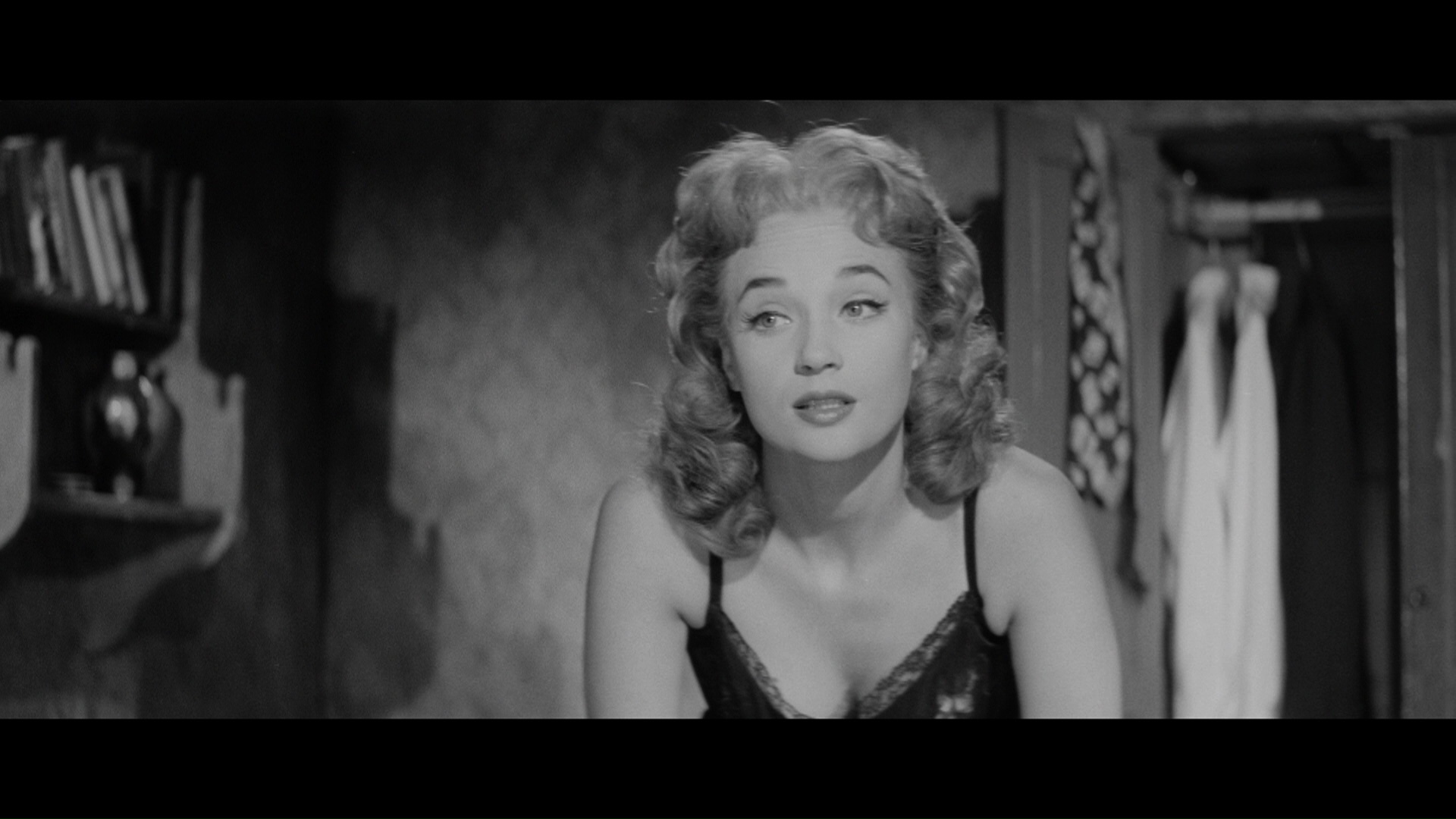 this point by directing such Hammer films as The Quatermass Xperiment, Enemy from Space, and The Abominable Snowman. His recent affinity for scope framing is 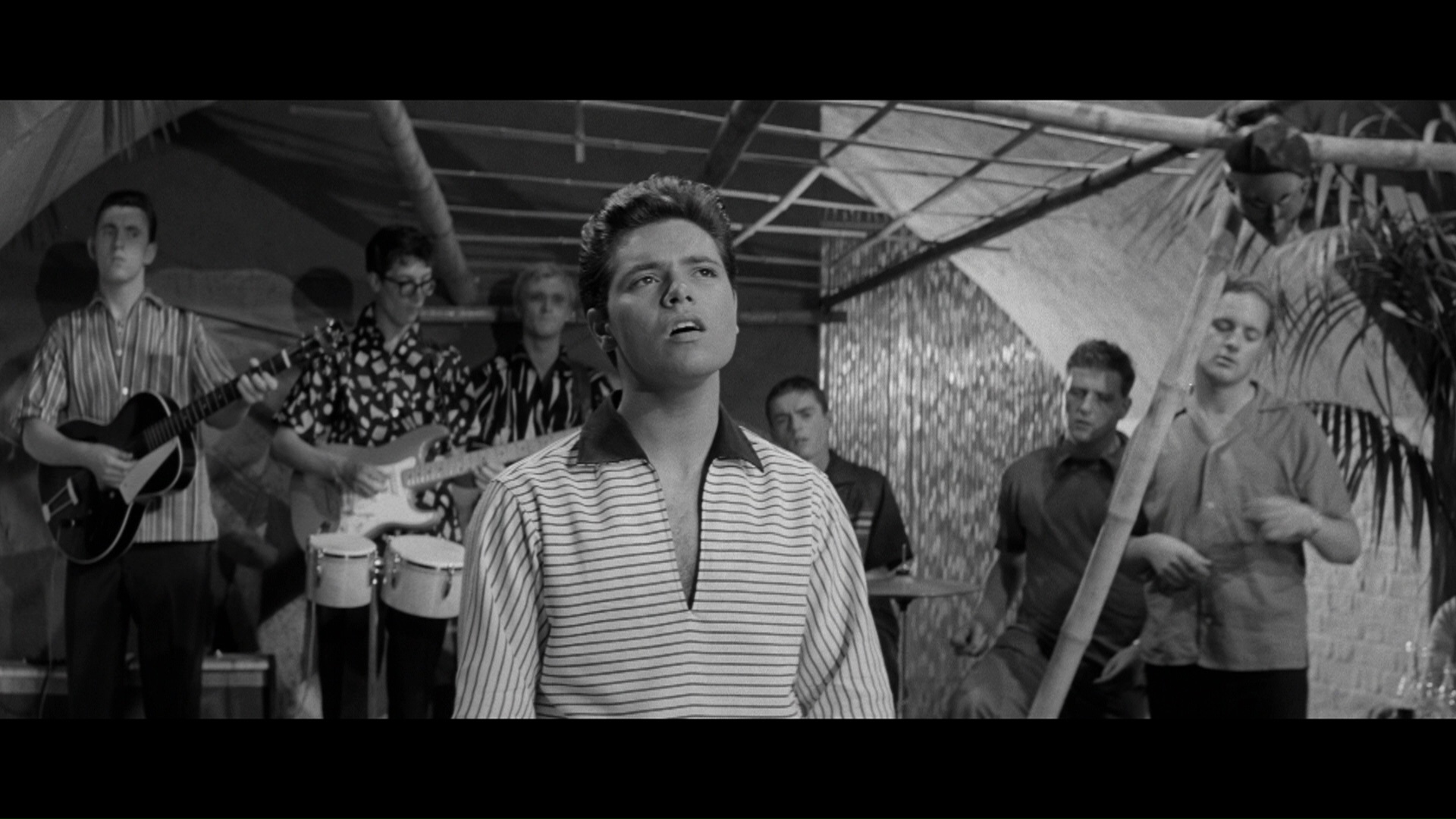 well in evidence here with some amusingly staged dance routines and occasionally startling callbacks to his sci-fi films, most notably a TV production with a gigantic, very wide cosmic panorama in the background. He'd later go on to merge musical and sci-fi far more directly in the early Olivia Newton-John film Toomorrow, which is still screaming out for a legitimate home video release (and would make for a great BFI Flipside title, hint hint). Interestingly the film also takes an early stab at dealing with the strange relationship between religion and popular music, which would later come to the forefront more aggressively in the masterful Privilege. As a musical it's really peculiar, starting off with songs confined to stage performances but then shifting to the major characters bursting into song whether spending an afternoon at their flat or strutting down the street. You haven't lived until you've seen the usually serious Harvey jaunting around in front of a record shop crooning "I've Never Had It So Good." Most people came to see this for Richard, but it's really Harvey's show.

However, those musical numbers outside of the club mostly wound up missing for decades when this film was reissued in 1962, cashing on the Cliff Richard and the Shadows craze by dropping three of the songs without his involvement. That cut was used for both the American DVD from Kino in 2001 and the British editions on VHS and DVD, though at least those were all widescreen to preserve some of the film's more audacious visuals (such as a split-screen shouting match via telephone and the terrific, very creative opening titles). Fortunately that's a moot issue now with the 2016 dual-format edition from the BFI's Flipside series, which finally presents the complete 1959 version in all its glory -- and it's a drastically improved, more energetic film in the process. 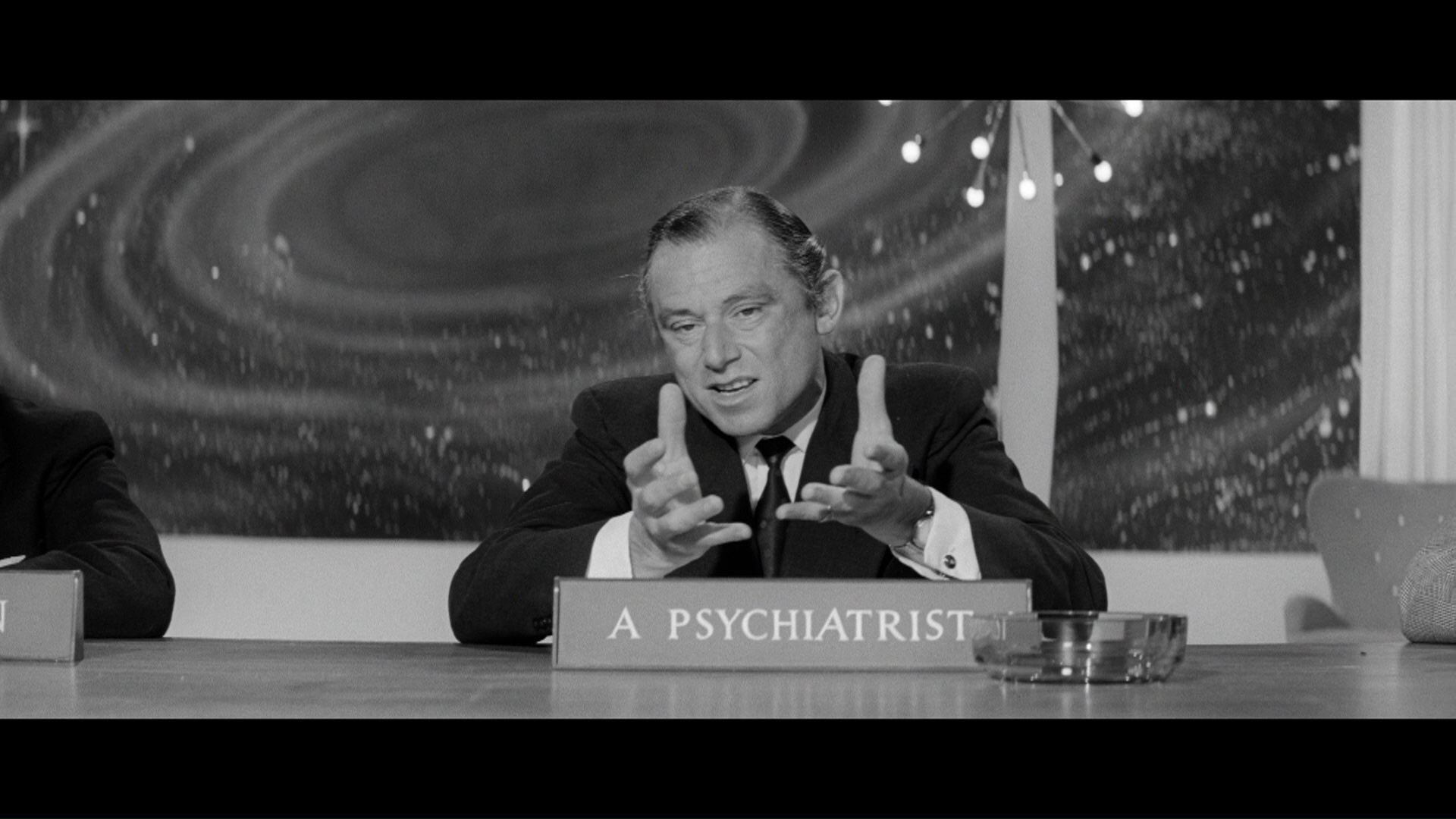 The standard shorter reissue edition is included as well on the Blu-ray (with the handful of alternate bridging footage presented separately on the DVD); both cuts are newly mastered in 2K and looking absolutely perfect. The LPCM 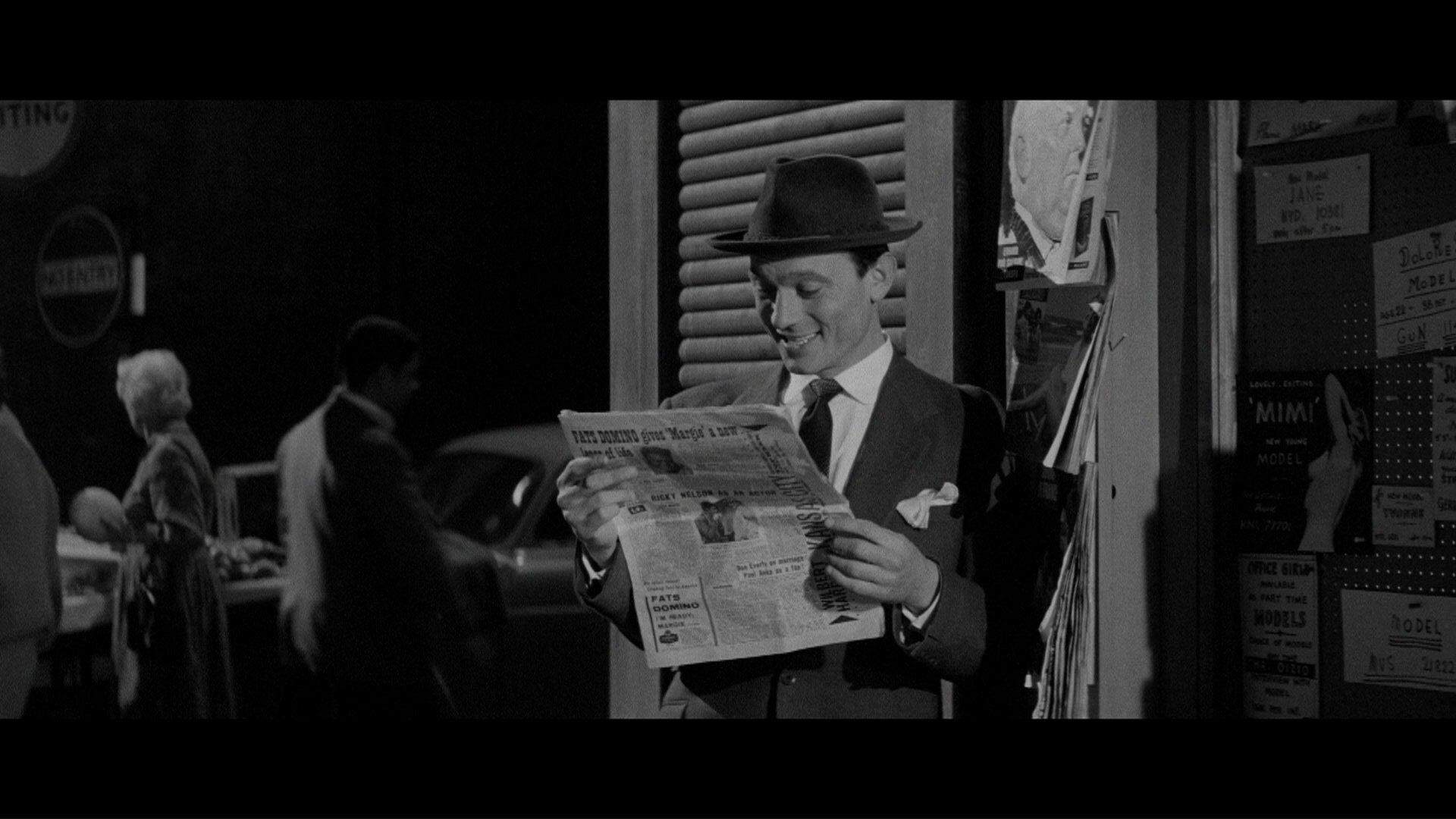 mono tracks sound robust and clean, and optional English subtitles are provided. Carried over from the UK DVD is an audio commentary by Marcus Hearn for the 1962 reissue cut, featuring Yolande Donlan (who plays TV hostess Dixie and gets a fun sashaying stage number in sequins and feathers) and Guest, originally recorded in 2005. The real-life couple (who had married in 1954 and remained together until his death a year after this recording) make for a fine conversational pair, recalling everything from consulting with Wolf Mankowitz (author of the original source play and brief cameo player here) about the accents and casting actresses against type as strippers. Also included is a 4-minute gallery of stills and promotional material, the UK trailer, a fun 17-minute 1954 short called "Youth Club" (a look at how kids fare better when they have part-time day jobs and night school and spend time with friends at a hangout with their peers), and a sweet 16-minute short film from 1957, "The Square" (directed by Michael Winner!), about a dog-loving elderly man coming to terms with all the spirited kids and young parents popping up around his block -- with a very Capra-esque turn halfway through and lots of square dancing. The DVD also includes pdfs of the rare US and UK pressbooks, while the package itself comes with a liner notes booklet containing an essay by Andrew Roberts (who covers the stage to screen process involving such other names as Paul Scofield and Peter Sellers!), plus bios and feature notes by Vic Pratt and Steve Chibnall.