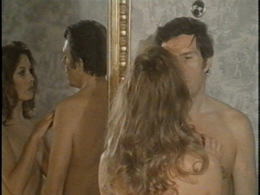 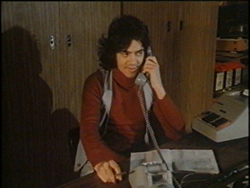 If that sounds confusing, well, the actual film doesn't clear up a whole heck of a lot either as it rambles through the story of a reporter offering some cash to a pretty young brunette named Valérie (Boisgel) to tell her shocking story, following an opening credits assault of salacious newspaper headlines accompanied by a pretty great quasi-Bruno Nicolai soundtrack. Her whole story is told "from beginning to end," actually taking up a little under an hour of screen time as we follow a crazy weekend in the country for Valérie and her friends. Delphine (Nicolas), a bleach blonde shutterbug in leopard skin, gets serviced in a car in the woods when she runs out of a gas (and a goofy peeping tom watches from the trees), while her husband Max (François) runs out to get a refill.

At this point the time frame of the film goes out the window as we bounce back and forth between the chat with the reporter, arbitrary flashbacks like a hunting party / comic sex romp and an irrelevant love scene next to a pig in a hayloft, a trip to a bowling alley, and a burlesque act clearly taken from an old loop. Some semblance of a story finally pops up in the last 20 minutes when Max and Valérie's husband, Hugues (Tristan), take off for a quick trip to Paris, leaving the ladies alone with Valérie's elderly 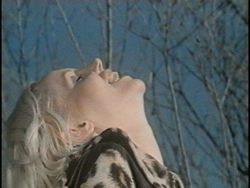 mom and the family dog. A couple of young yokels named Etienne (Foucault) and Julian (Tissier) decide to swing by, sexually assaulting both women on the staircase and around the pool table before taking off for their girlfriends and sending the victims some incriminating snapshots. However, the games are far from over... 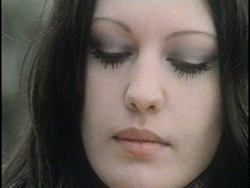 Strange and sleazy without ever being particularly explicit, Erotic Blackmail tosses in an insane amount of padding throughout its running time, most of it involving bare breasts. The most familiar face here is probably Boisgel, who had previously appeared in Claude Mulot's astonishing The Blood Rose, while pretty much everyone else stuck with adult films. Trying to parse this one out is complicated by the splicy source material used for the One 7 Movies DVD, apparently the first home video release in any format, which is obviously taken from a battered VHS copy complete with dropouts and the occasional tracking issues. The original running time is anyone's guess (IMDB lists 74 minutes, for what it's worth), but since we're dealing with PAL conversion issues and major element damage (including some shots hacked down to a couple of frames), it's impossible to say whether anything of substance is really missing. The film appears to have been originally shot at 1.66:1, and the full frame presentation appears to squeeze that a bit to 1.33:1 so at least there isn't anything missing on the sides. The mono Italian audio sounds fine for what it is, while the English subtitles are serviceable despite some amusing typos.