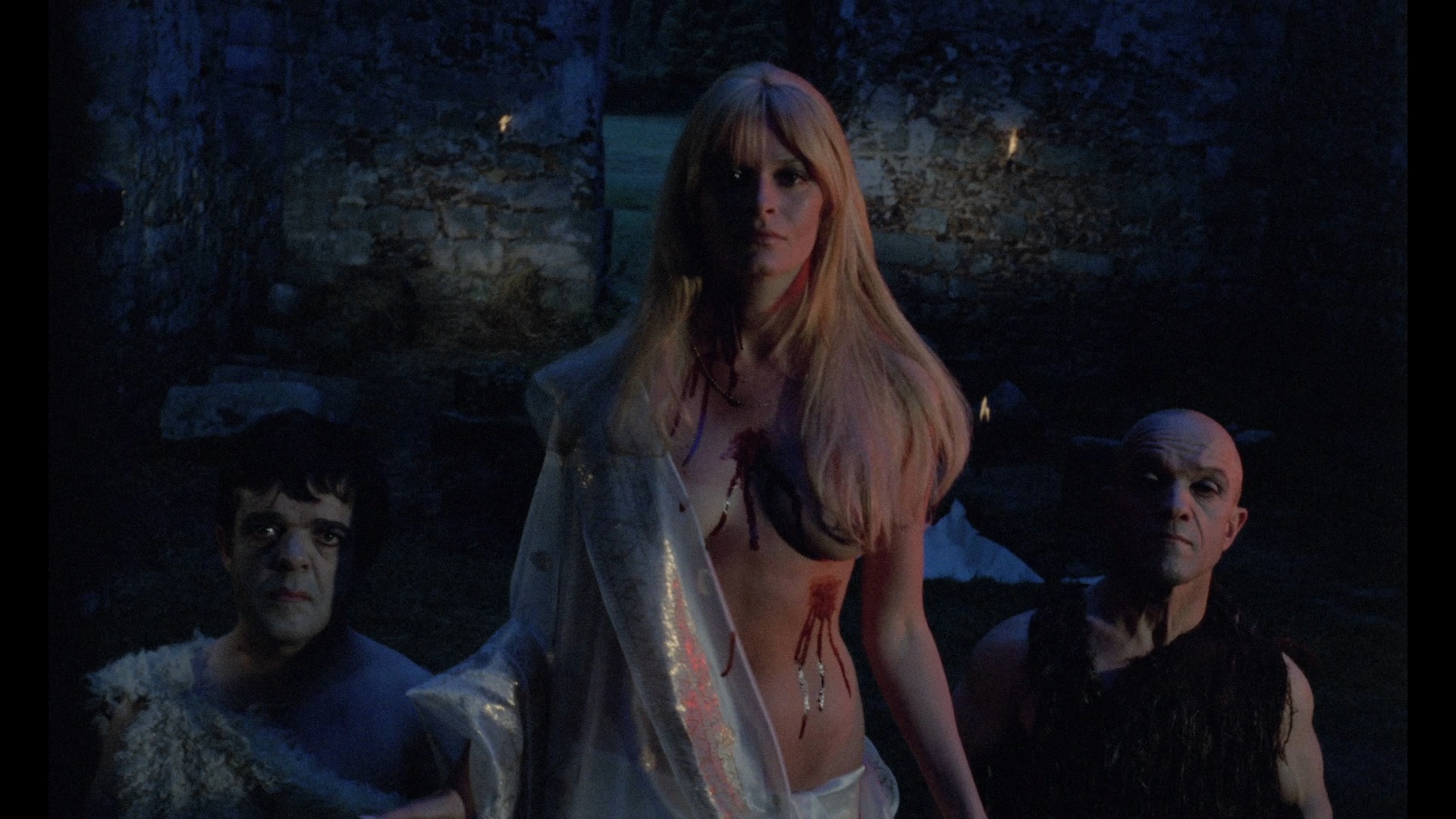 France as "the first sex-horror film" (a dubious claim for 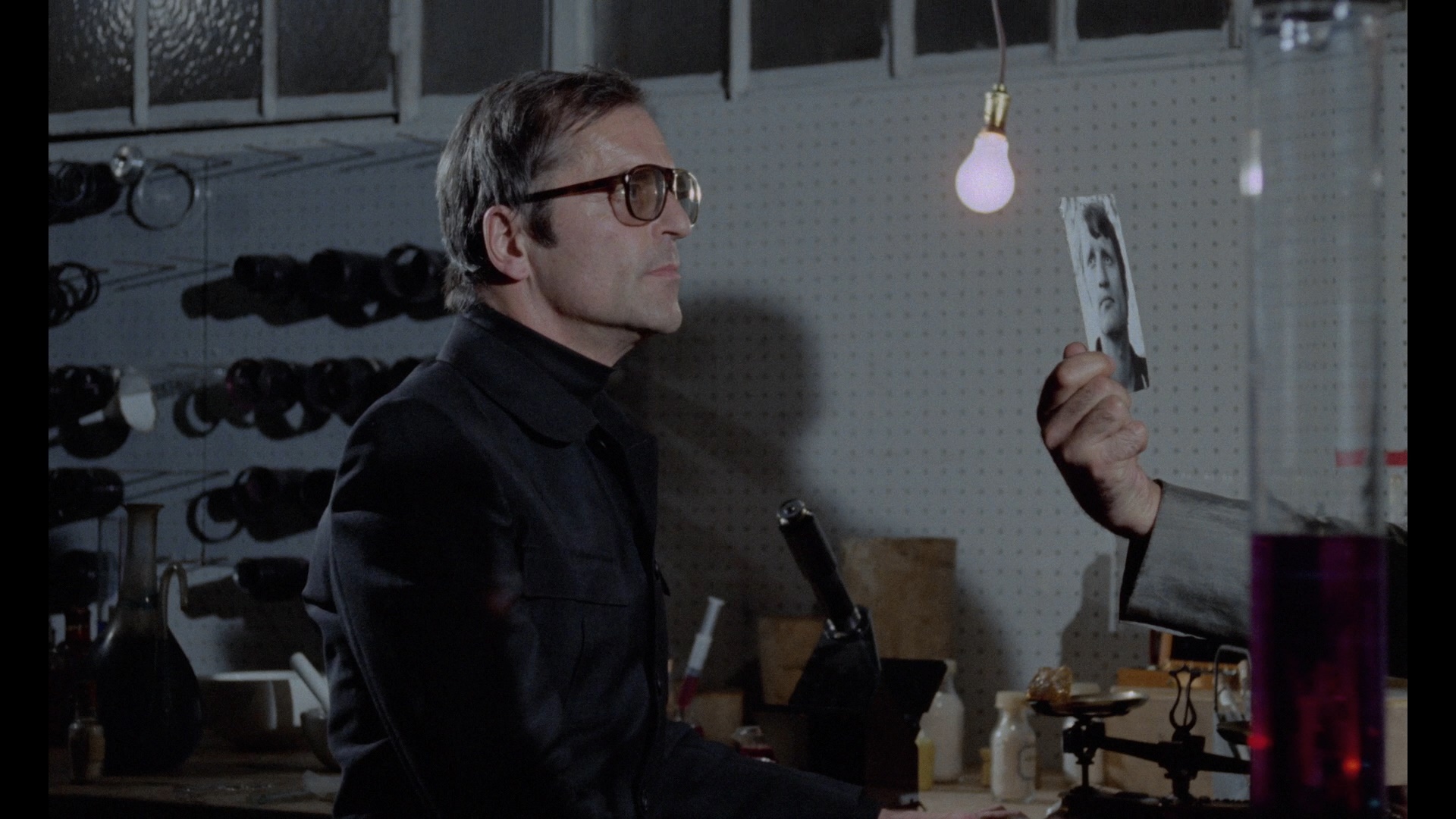 anyone familiar with the works of Jess Franco), The Blood Rose is a film more often written about than seen outside Europe; as such, it now possesses something of a cult mystique among the numerous "rich guy goes nuts and kills to restored a disfigured woman's face" tales released in the wake of Eyes without a Face. This time the perpetrator is Frédéric Lansac (Lemaire, fresh off Roger Vadim's episode of Spirits of the Dead), a well-to-do painter living in a castle who loses his sanity after his new wife, Anne, plunges face-first into a bonfire during a late-night fancy dress party. Faster than you can say Circus of Horrors, he blackmails a discredited plastic surgeon into helping him abduct and kill young maidens for their flesh to restore his beloved's beauty, with the expected disastrous results. 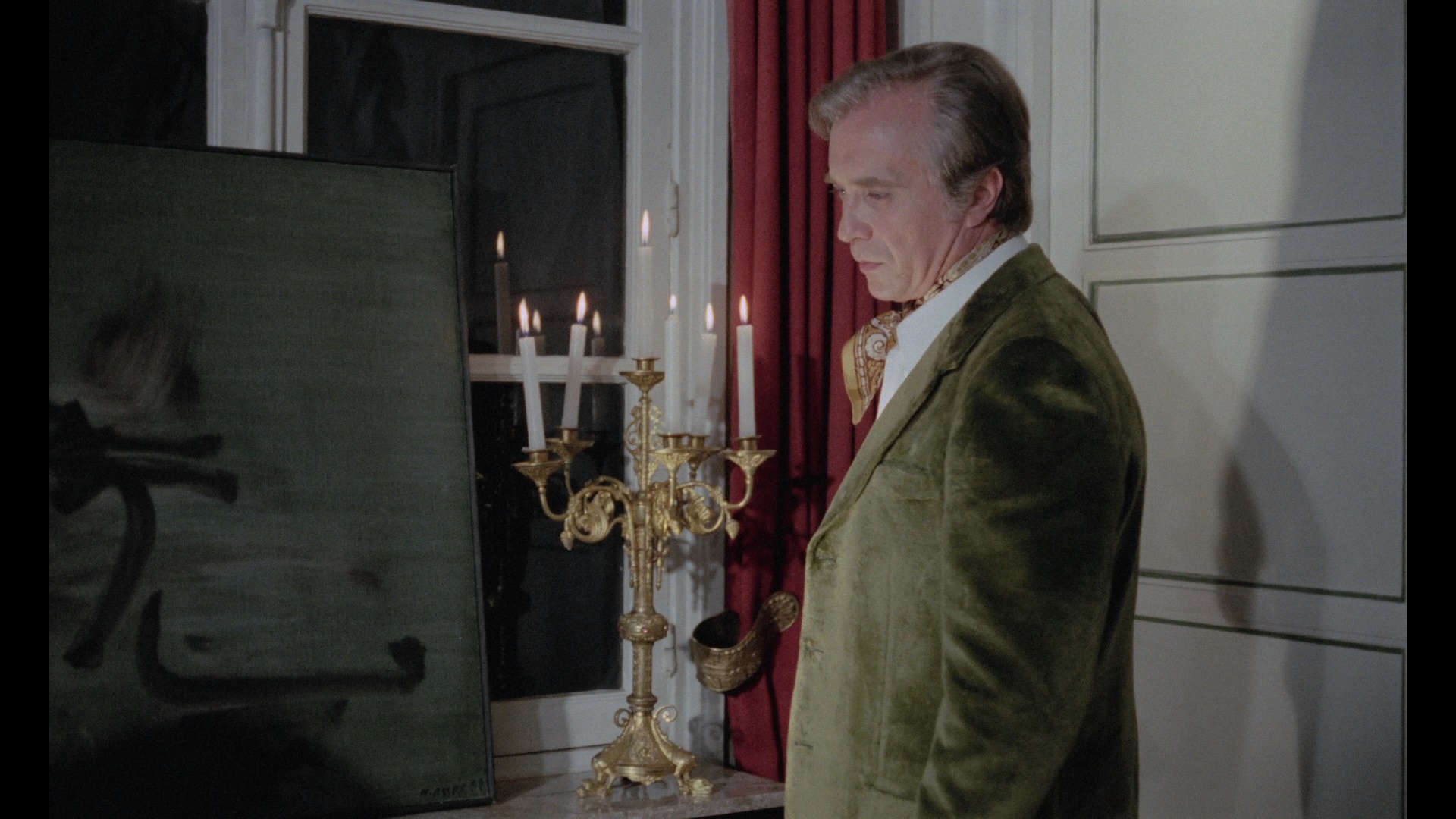 hardcore films, such as the mediocre-but-influential Pussy Talk and the great-but-unknown La Femme Object. Mulot displays a sure sense of color here, with plenty of 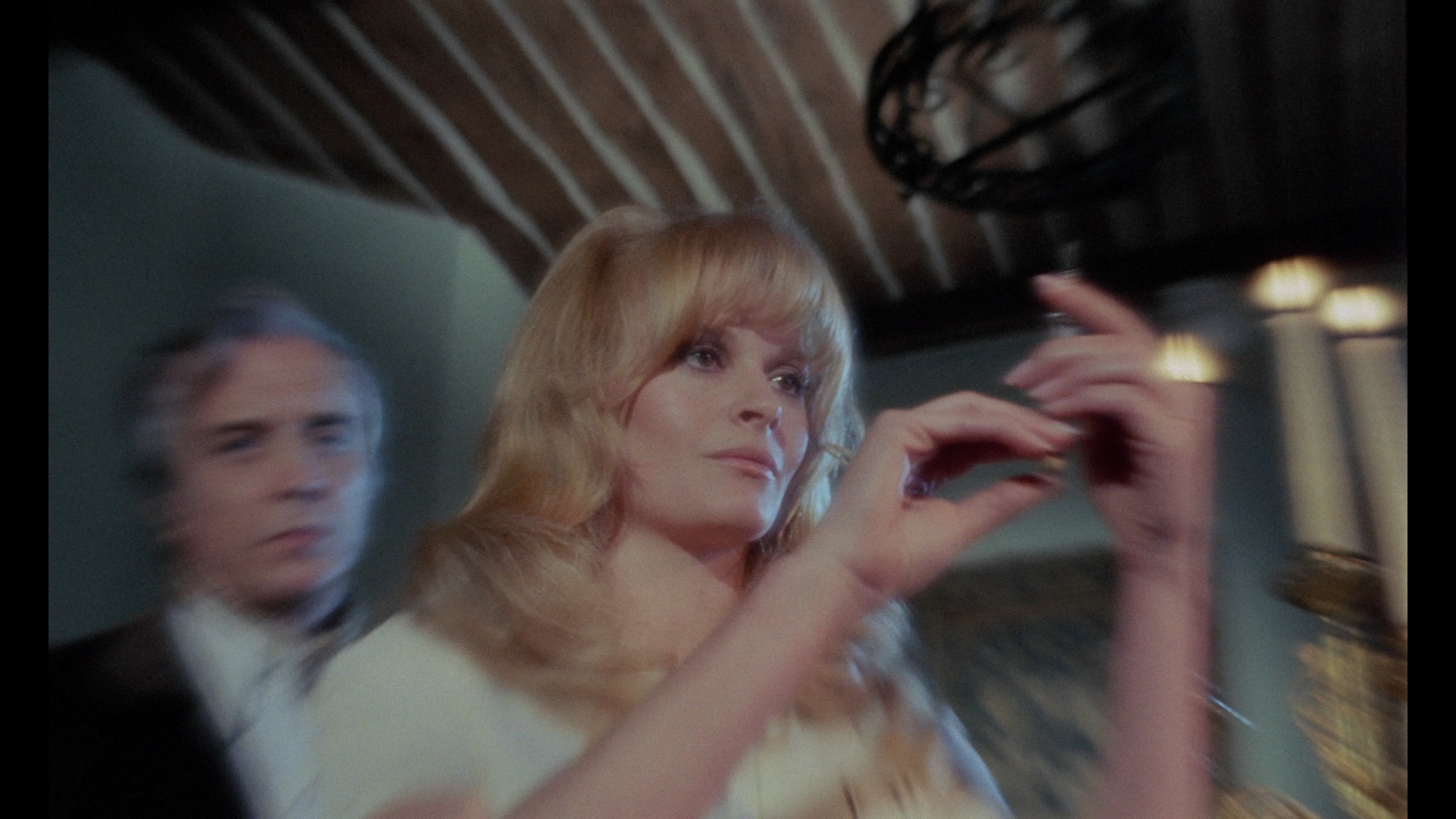 vivid blues and reds highlighting the deliberately ornate and antiquated costumes with occasional, startling bits of mod architecture. Franco regular Howard Vernon (the original Dr. Orlof) has another juicy villainous role here, most memorably teaming up with Lemaire for a brutal attack scene in a lake.

Though it barely circulated on home video in its first few decades of existence both under its original title and the English export title of Ravaged, The Blood Rose first got the real red carpet treatment courtesy of Mondo Macabro's 2007 DVD release. The transfer from the original negative looks quite nice; though the film stock shows its limitations in a few of the night scenes, the colors and detail are excellent. The mono audio can be played in French or dubbed English, with optional English subtitles provided. (The French version is much better, but the typically awkward dub has its pulpy charms, too.) As usual, the extras provide some much-needed context for this film, with Pete Tombs providing a succinct but informative survey of erotic French horror, plus well-written bios for Mulot, Lemaire, and actresses Anny Duperey and Elizabeth Teissier. Other extras include a stills gallery, an updated Mondo Macabro promo reel, and the most substantial goodie, an interview with Didier Philippe-Gerard (23m9s), Mulot's friend and brother-in-law who co-wrote the film and also went on to a porn career as "Michel Barny." The genial, mustachioed fellow speaks fondly of his comrade and offers a satisfying sketch of independent art/exploitation films in France during the 1970s and 1980s, a golden period 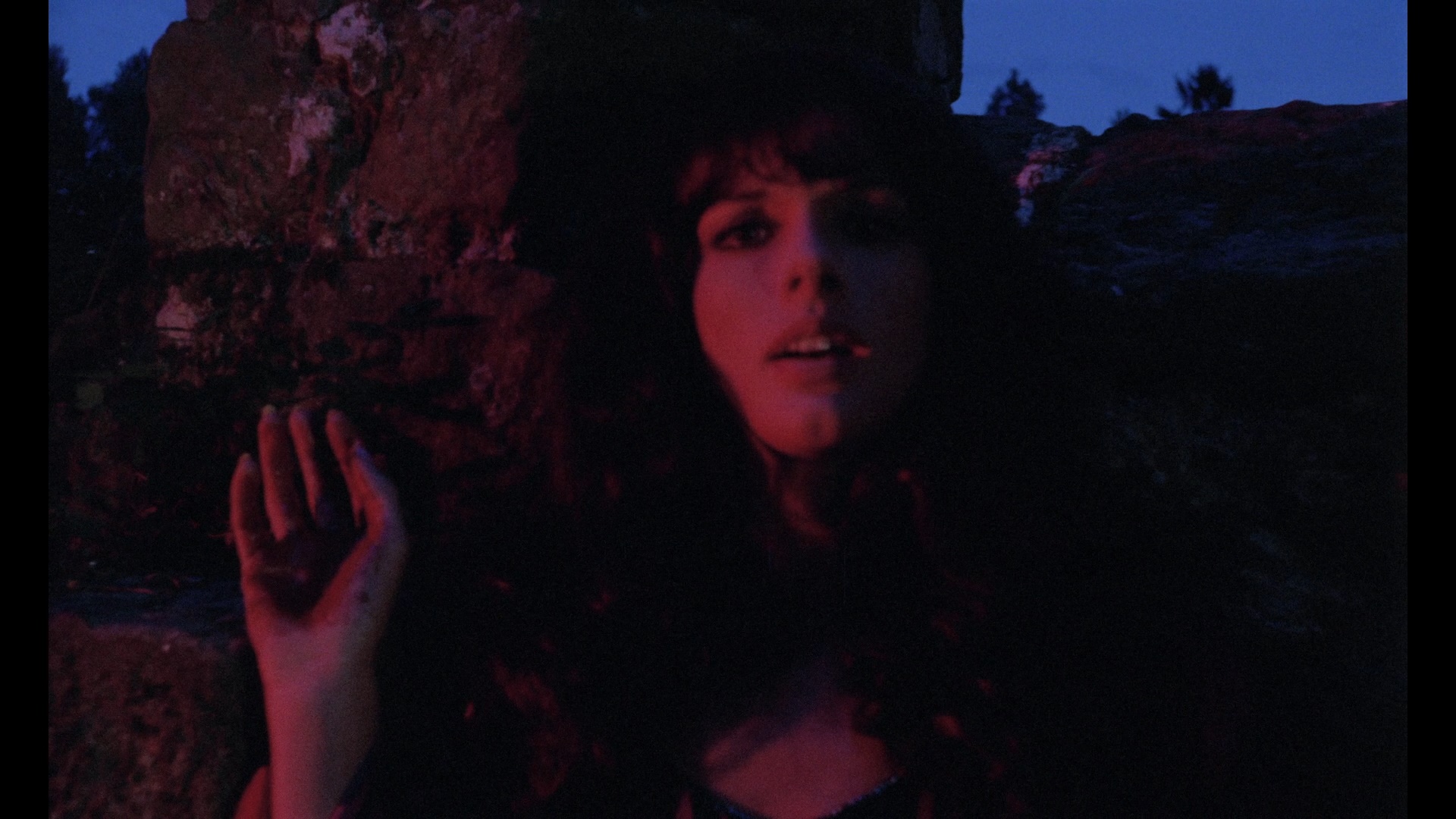 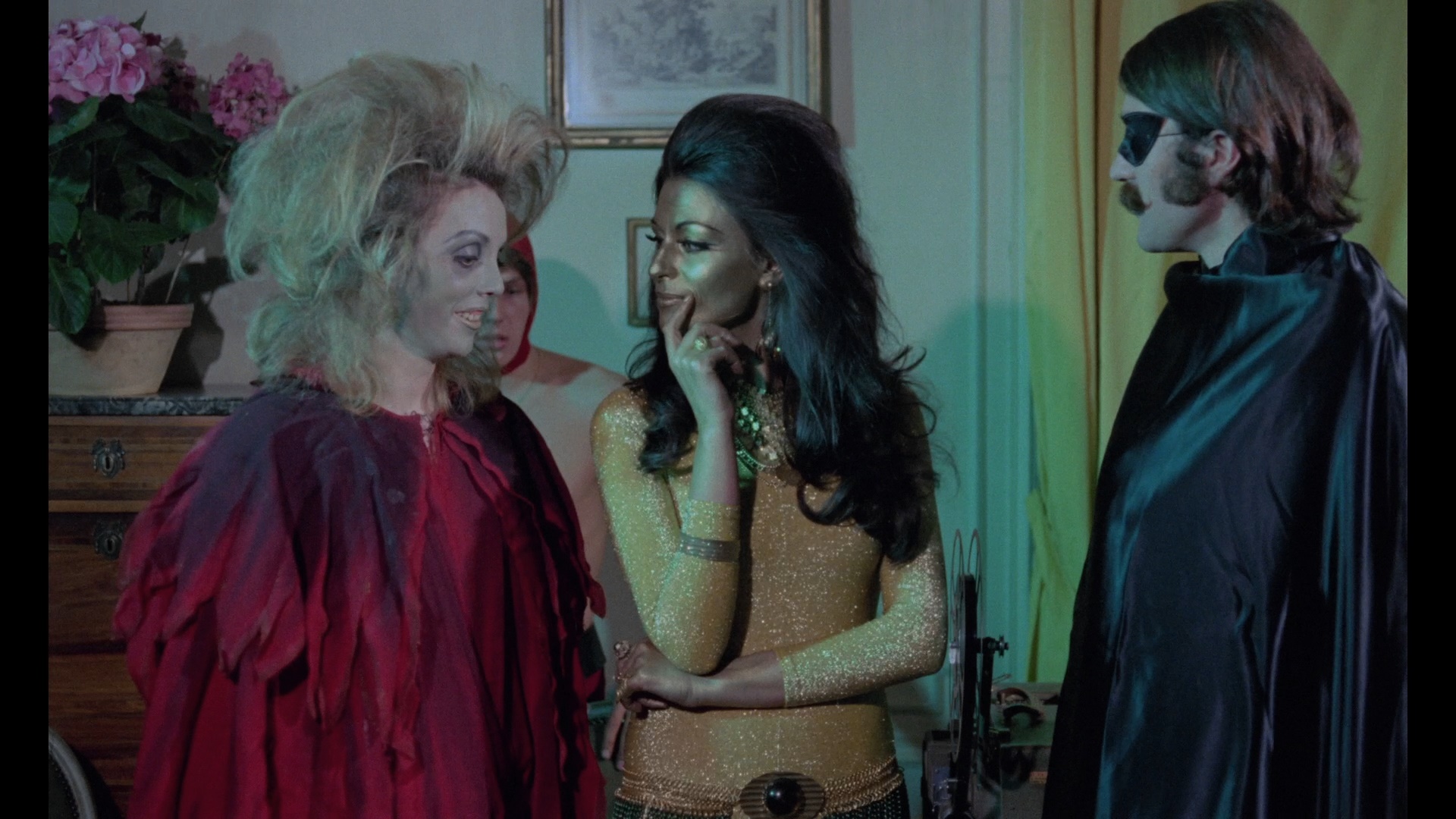 Incredibly, this film was selected for not only a Blu-ray upgrade but also the first classic French horror film to make the leap to UHD with a triple-format release from Le Chat Qui Fume (also including a DVD, and with a Blu-ray/DVD combo also issued). The new 4K scan from the original camera negative is a real eye popper, and the UHD in particular (which doesn't feature HDR or Dolby Vision but still looks pretty darn great) has a crystal-clear intensity that truly makes this look like it was shot yesterday. Both the French track (with optional English subtitles) and the English dub are included, in DTS-HD MA options on the Blu-ray. The UHD is bare bones (no main menu, just a pop-language switch option) to max the film out on the disc, but the Blu-ray and DVD have a nice selection of extras. A batch of B&W behind-the-scenes footage (3m41s) shows the filming of one scene and a little bit of muffled Q&A with the cast, while interviews with producer-writer Edgar Oppenheimer (25m31s), cameraman Jacques Assuerus (34m56s), and writer assistant directors Hubert and Georges Baumann (11m32s) are included in French only. "Souvenirs de Claude Mulot" with Brigitte Hahaie (9m34s) features the beloved horror and adult film actress chatting (again in French only) about working with the late filmmaker, and in a funny touch, the Blu-ray only features a "mode VHS" presentation of the film in its SECAM release as Devil's Maniac, just in case you want to see how terrible this used to look. The film's French and English trailers are also included along with bonus ones for Mulot's La saignée, Maniac, Haine, Return of the Living Dead 3, Vigilante, and Next of Kin. Buy from Diabolik. 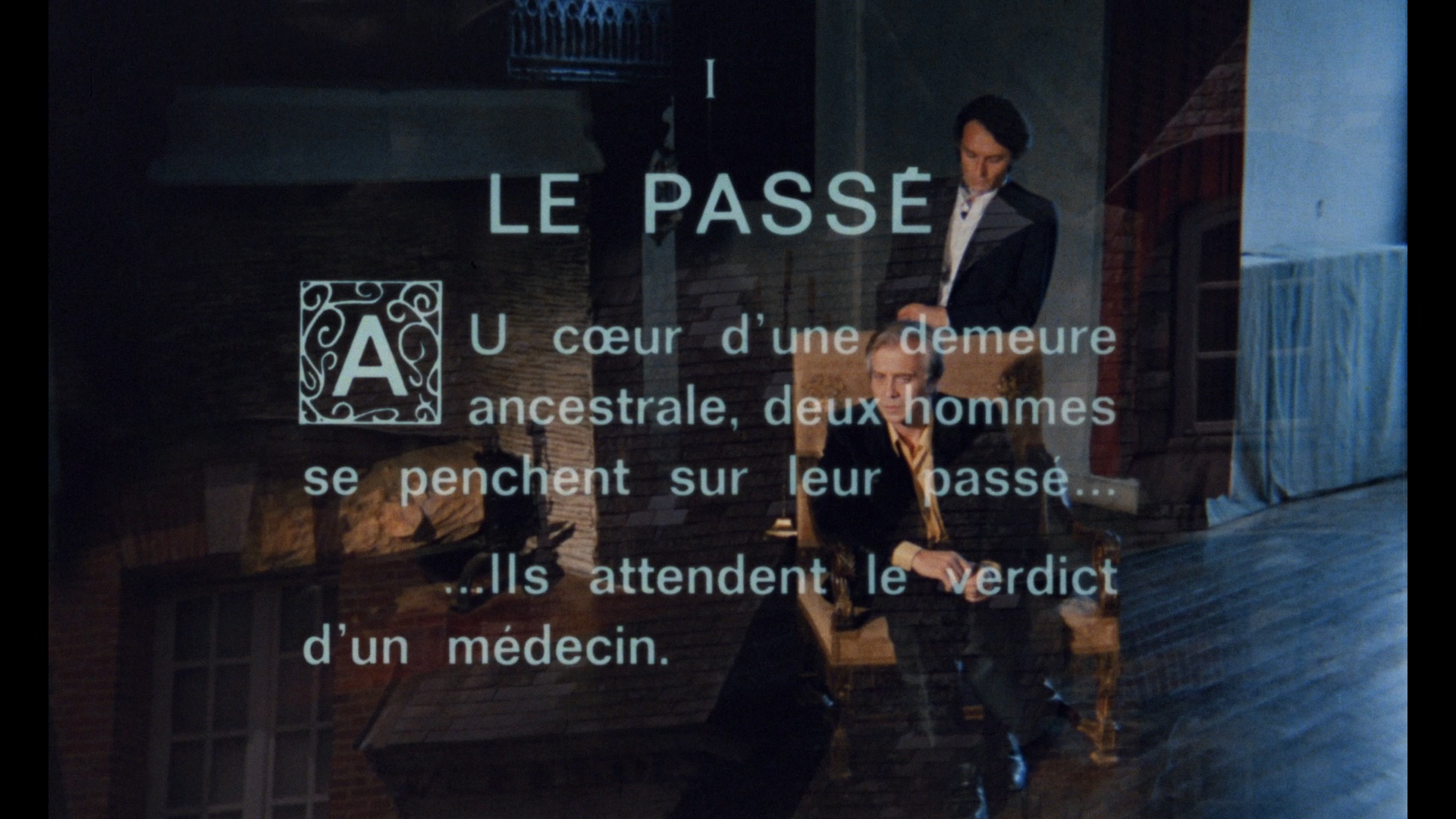 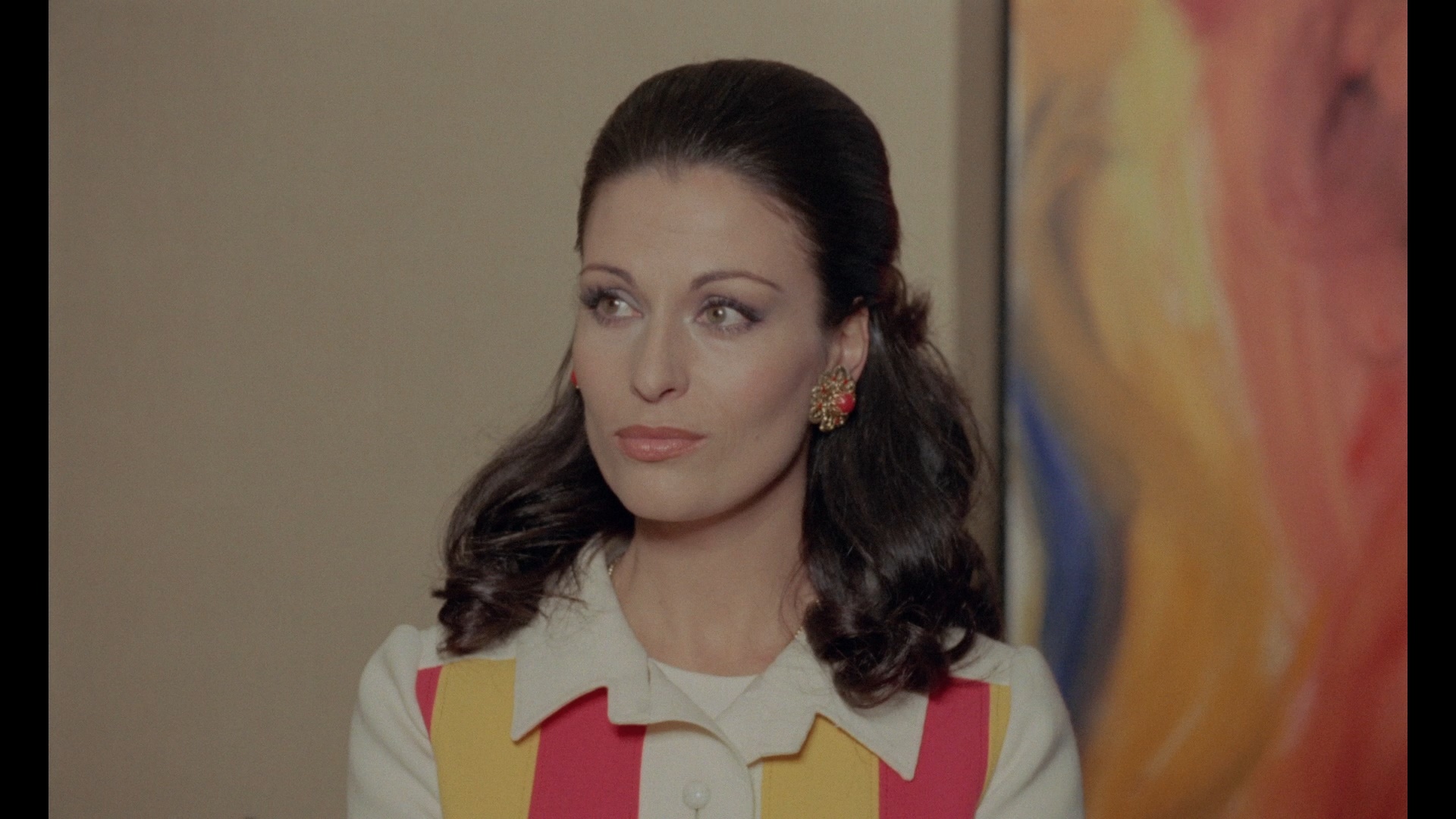 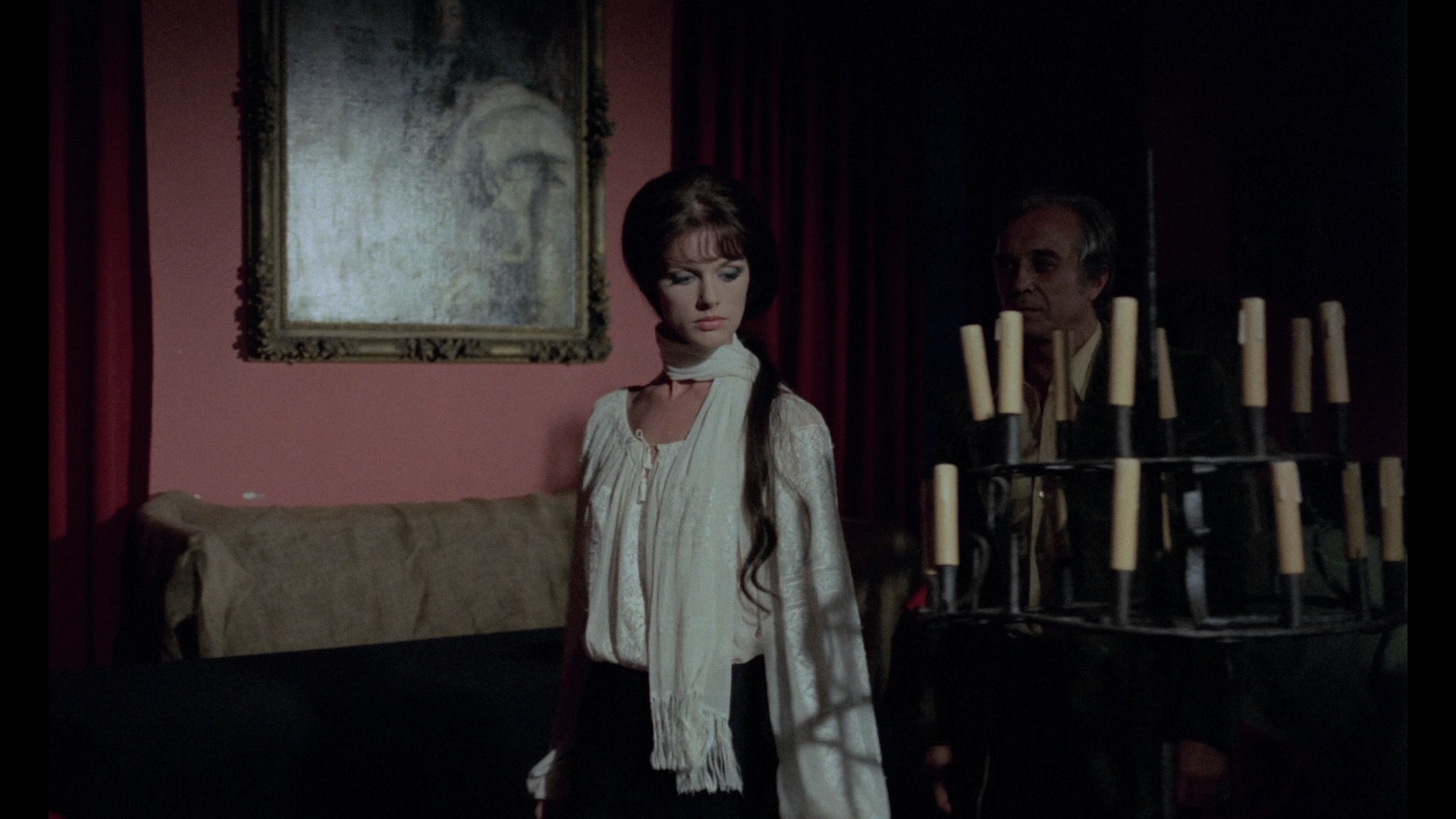 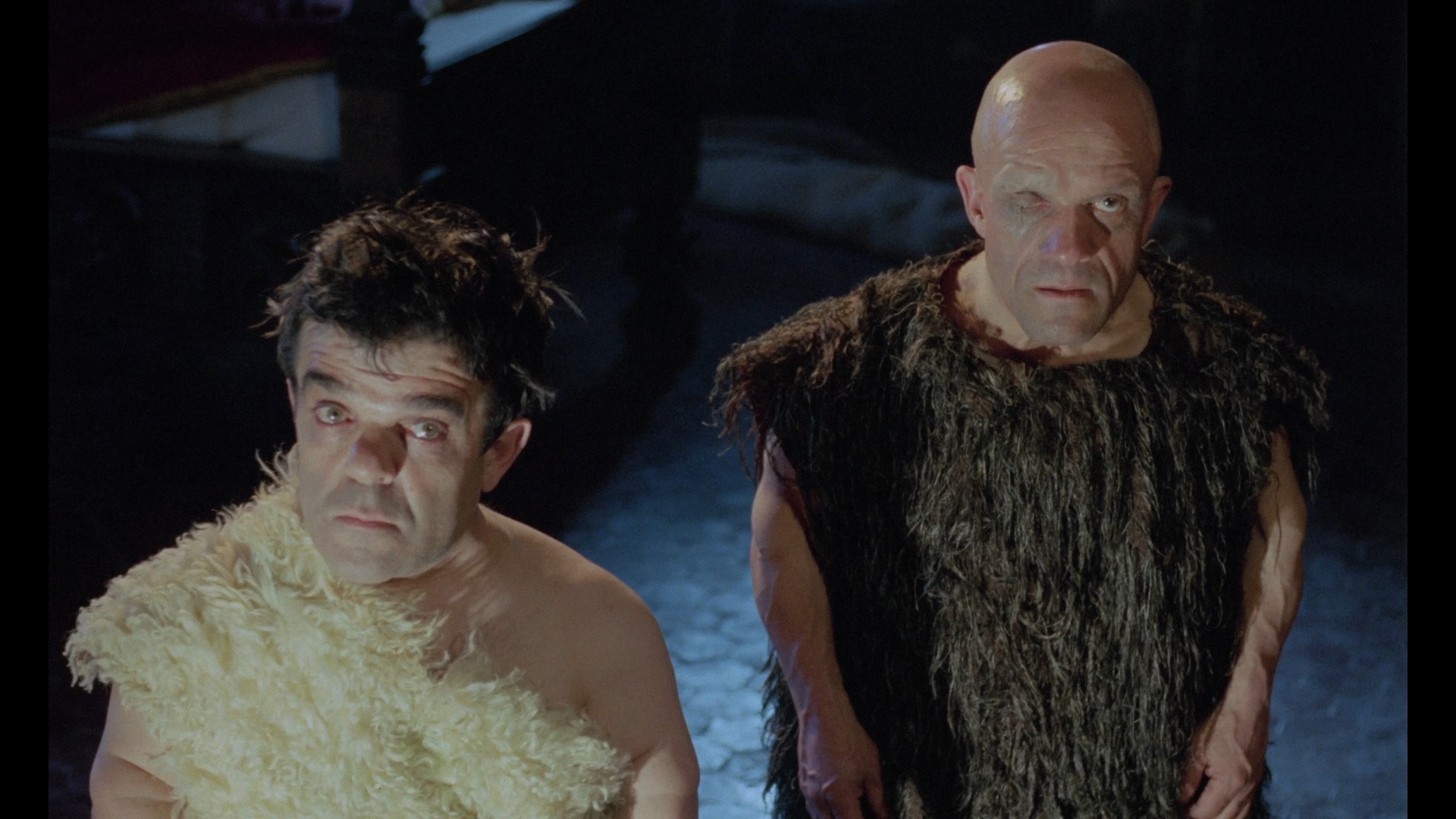 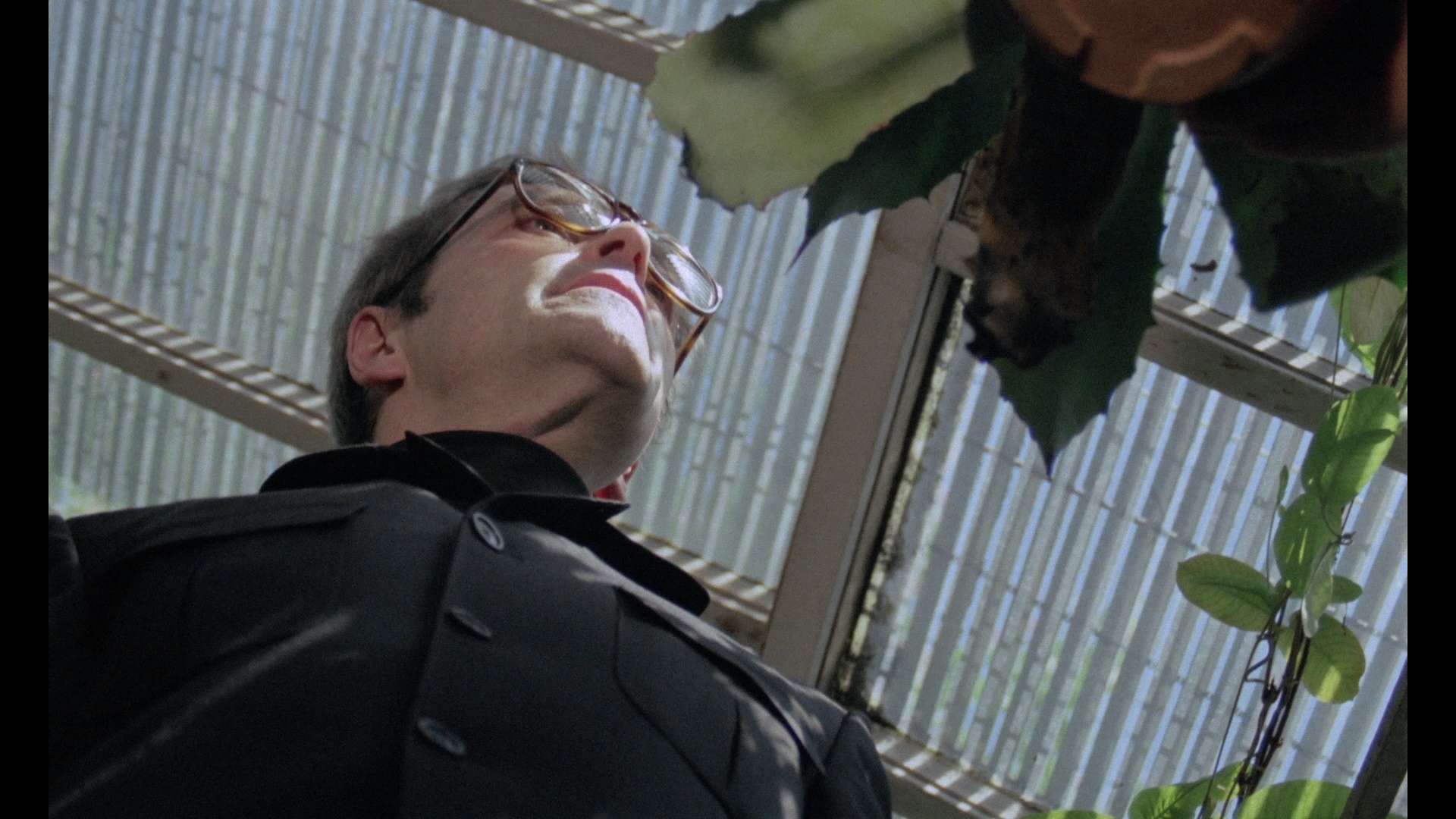 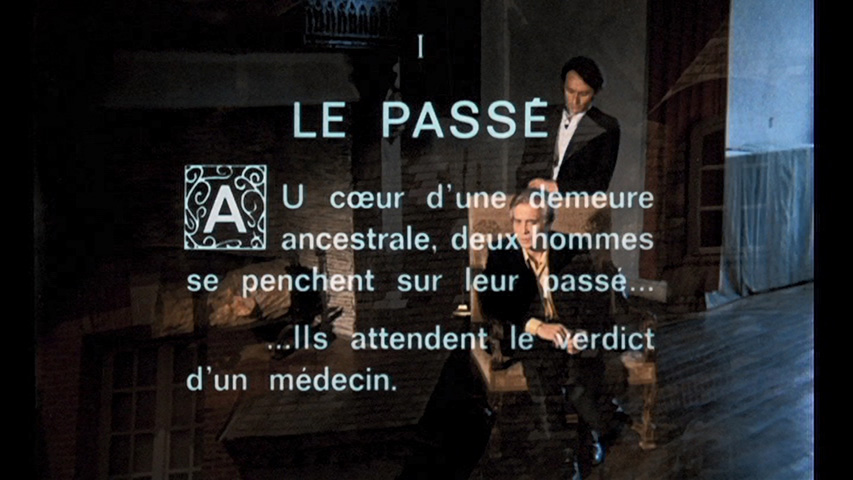 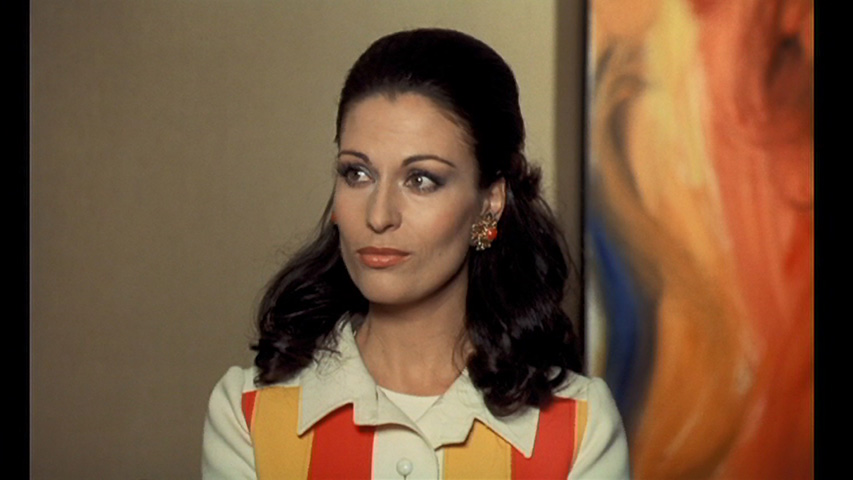 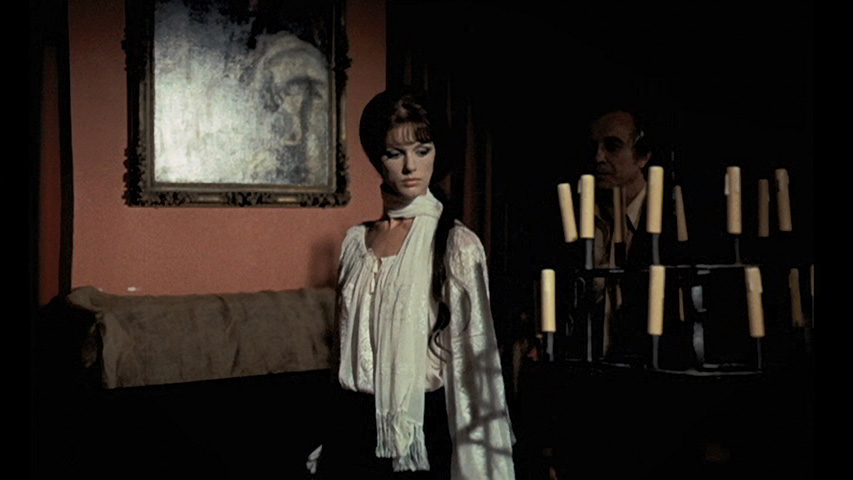 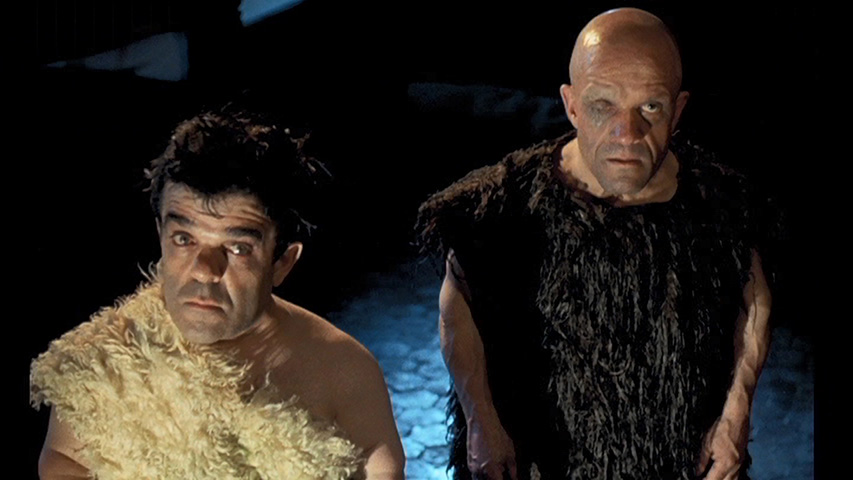 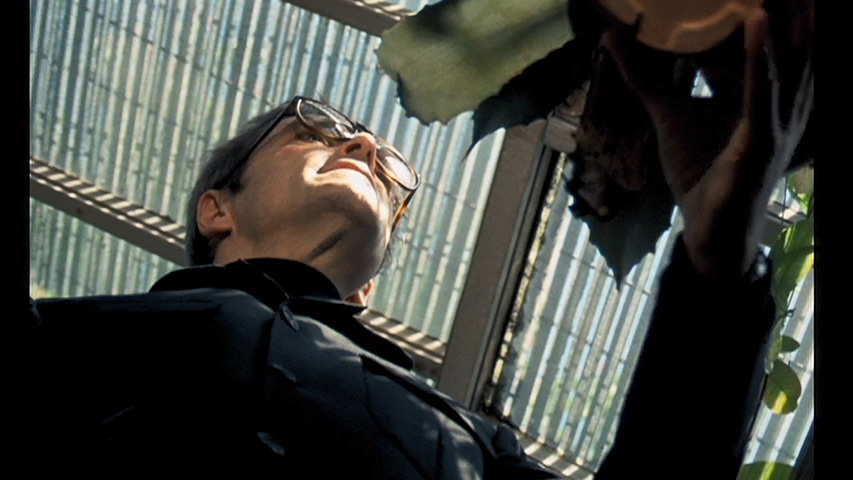