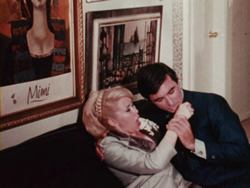 One of the many names running through different threads of the 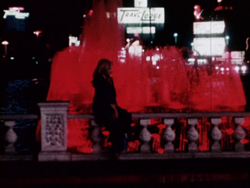 American drive-in experience is Donald A. Davis, who cut his teeth on Ed Wood productions like Orgy of the Dead and Night of the Ghouls before making the leap to the director's chair with fare like the Wood-penned For Love and Money. He really hit his stride from the late '60s into the early '70s with a batch of sexploitation films and odd one-offs like the southern-fried Swamp Girl. This Vinegar Syndrome DVD triple feature compiles together fresh transfers of 35mm prints of three particularly representative Davis efforts packed with the combination of bare breasts, soap opera theatrics, and nonsensical social conservatism you can only find in that brief cinematic window.

Marsha Jordan, an appealing blonde star of numerous loops shot for the big bust crowd, had her most famous starring role as the title character in Marsha the Erotic Housewife. While the title conjures up images of a naughty sex farce about a married woman bedding her way through the neighborhood, the actual film only partially delivers on that promise. It's mostly played straight as Marsha confides in her best friend and neighbor, Phyllis, about the state of her marriage to Greg (The Blue Hour's Blessington, credited as "Mark Edwards"). Everything was a rollicking blast at first, like that time their friends tape recorded them making love on their wedding night and surprised them in the sack, but Greg kept making more and more work excuses to go off and chase other women on the side. Marsha's pregnancy turned out to be an even bigger problem, sending Greg into the arms of every other woman in sight including his secretary. Now Marsha decides to do the only logical thing: go to Las Vegas and screw a bunch of guys to prove how much she wants to save her marriage.

An odd but compulsively watchable film, this one is mostly pure melodrama for the first half with Jordan staying surprisingly modest for much of the running time apart from the wedding night bit. However, once she decides to go wild things perk up considerably, especially when she stumbles into a threesome with a married couple. Then things steer into perplexing sitcom territory at the end as a friendly neighborhood luncheon turns into a scheme to steer Greg back in Marsha's arms thanks to a grabby pal and a hunt across town for a bottle of cooking ingredients, surely the only time that's ever happened in sex movie history. There's even a crooning theme song ("Marshaaaaa...") to complete the package, and good luck trying to figure out what kind of moral the film's trying to get across by the end. Alabama native Jordan was already a veteran exploitation star by this point following roles in titles like The Head Mistress and Davis' The Muthers, but this film wisely makes her the center of attention throughout. Most of the actors painfully flub their lines and the much of it is shot in long, money-saving master shots, but it's impossible to care if you're in the right mood. 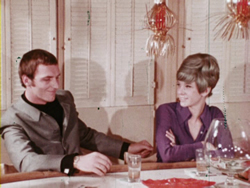 Marsha was one of the earliest and most popular VHS releases from Something Weird Video back in the '80s, and for some reason it never made the leap to official DVD under their banner. Instead it was shuffled off to DVD-R from the original soft, heavily damaged master prepared back then, leaving plenty of room for improvement. The Vinegar Syndrome transfer is still filled with debris and 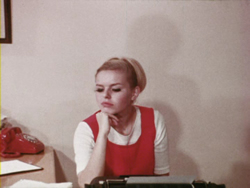 scratches at times, but it's definitely a big step up with far better color. The film was shot open matte at 1.33:1, which is how it's presented here, but the compositions were very clearly framed to be matted off to 1.85:1 in theaters. Zoom it in a bit on your TV and you'll get something pretty close to how it was screened or just leave it as is for a feast of extra head and foot room.

Next up in For Single Swingers Only, a 1968 portrait of the burgeoning swingers culture that soon come to dominate the 1970s. It's essentially a snapshot of life at a swingers' apartment complex where two new arrivals, Gracie (Hendersen) and Gloria (Sanford), are confronted with a gallery of oddball characters like super-slut Connie, playboys Arty and Dave, and a lecherous landlady. Boasting a heavy Scandinavian accent, Gracie narrates the events from pool side, a device abandoned quickly thanks to our heroine's garbled, often confusing dialogue delivery. Steam and exercise rooms are just a few of the backdrops for the mad debauchery, with the lack of real emotional ties eventually sending poor Gracie on a spiral leading to an insane, quasi-horrific climax.

A really odd one, Davis's film piles on the bare butts and breasts with abandon while painting a pretty nasty picture of the male gender. Basically it's a sexed-up version of the same year's studio variation, For Singles Only, in which being single is a perverse, degrading way of life that only stays off the inevitable path to marriage. Of course, that also makes it a pretty amazing time capsule and a riot of counterculture clothes and interior design, not to mention the acres of weirdly chaste nudity along the way. 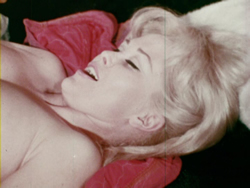 Something Weird released the film on DVD as part of its long-discontinued double feature with Free Love Confidential via Image Entertainment, and it was a pretty good rendering of a fairly aged print from the Harry Novak vaults. 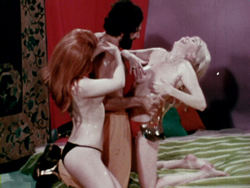 The Vinegar Syndrome version obviously updates things a bit with a fresh coat of digital paint, i.e., a 2K scan from Davis's personal print like the other two titles. It's still a pretty grubby-looking film, but the borderline psychedelic color schemes look fine.

Easily the wildest film in the set, this one's also a sizzling showcase for Jordan at her best as she gallops through one absurd, naughty situation after another. Davis keeps the pace clipping along well with a surprise waiting around every corner, such as an impromptu stabbing that sends our leading lady tearing off naked except for a raincoat. Incredibly, this is also apparently a sequel to another Davis/Jordan film, the now-lost Odd Tastes, which probably explained how she became such a pro at selling sex toys around the neighborhood.

Like Marsha, this one hit VHS from Something Weird back in the early days and was carried over to DVD-R with a pretty rough transfer from a battered 16mm print. The new 35mm presentation here is a very welcome step up with a significant boost in color, detail, and pretty much every other visual attribute you can think of. The audio is also better with much less crackle and noise. No extras, but with this much stuffed onto one disc, who can complain?