mines of obscure sleaze cinema have yet to come close to being exhausted, along comes Vinegar Syndrome with another batch of disreputable discoveries unseen for generations (if ever). First up is The Blue Hour, the most ambitious of the bunch and the only one made in the '70s, which charts a young woman's journey to happiness in spite of a sordid back story that'll make your head spin.

While making out on the beach with her boyfriend David (Nicholas Wayne), brunette model Tanya (Ann Chapman) finds her mind drifting off somewhere else. "It has nothing to do with you," she explains about her chilliness (which doesn't seem like a very flattering excuse). Her shrink says her head's screwed up because of her past... and what a past! From flashbacks we see this involves her in an Indian headdress getting hauled around behind a horse in the desert, a blond dude wielding a rifle, and avant garde music... which turns out to be a TV commercial shoot. Apparently the blond guy, a professor, thought it was a real attack, and he decides to track her down through her modeling agency -- which leads to a romantic montage set to a frothy pop song and a very, very long exotic gypsy dance at a restaurant. The owner of the agency decides to stop her from running off by busting into her apartment and smacking her around, which ends very badly. More flashbacks show how she became a model in the first place, which includes nudie photo shoots, piggish clients, bucket loads of glittery silver eye shadow, shock freeze frames, attempted

lesbian rape, a grabby Greek farmer who looks like Harry Reems, and a beefcake priest who awakens beastly urges within her. Meanwhile in the present, David's planning a trip to Canada for a big deal involving an uncredited turn by

WKRP in Cincinnati's Gordon Jump(!) as his business investor. Can she get over her hang ups and the mysterious death in her past and finally move on to a happy life?

An early '70s indie film right to the core, The Blue Hour didn't leave much of a trail if it ever showed in a theater anywhere. The onscreen title is actually L'heure bleu (The Blue Hour), which should tip you off right away that this is an aspiring art film with enough T&A thrown in to attract the attention of distributors. It's also the directorial handiwork on Serge Goncharoff, who helmed the low wattage shocker House of Terror. More interestingly, he also worked behind the scenes in various capacities (often music editor) on everything from The Female Bunch to Song of the Loon, with the latter's mixture of skin and pretension (not to mention inappropriate Indian garb) casting a big shadow here. The story doesn't really make much sense beyond "Tanya's a mess and had some freaky stuff happen in Greece" (which entails her screaming a lot for unclear reasons), but if you sit back and just go with it, there's plenty of fun to be had including that AM-friendly soundtrack. (For the record, it features the songs "Tanya" and "You're a Woman" by Ernestine Anderson, and "Can I Live Again" by Dee Dee Canova).

Vinegar Syndrome's release of this artsy/sexy rarity is up to their usual pristine technical standards, with a transfer from film elements that probably haven't been touched in over forty years. Everything looks great here from the gaudy color schemes to the dreamy landscape shots, and print damage is extremely minimal. The mostly looped mono 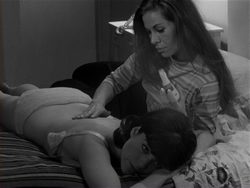 soundtrack is fine, too. 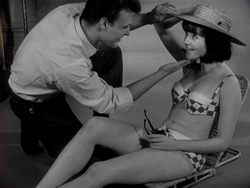 If that weren't enough, this is actually a two-disc DVD set with a second disc including two more rarities from the same distributor, Grads Corp. (the folks behind Diamond Stud and Sandra: The Making of a Woman). Both would be right at home on a vintage Something Weird double feature, starting off with the 1965 black and white softie, One Naked Night. This one earns its stripes right away by starring Audrey Campbell, star of the infamous Olga roughies, who steals the film from the nominal heroine, Candy (Barbara Morris), first heard in voiceover saying, "I hope I'll never see this horrible little town with its disgusting little people again." Yep, it's another story about a small town girl sick of puritanical morality who ditches her fiance and takes off for the big city, all to escape the stigma of her hooker mom's suicide. In New York she moves in with her best friend, Laura, who comes attached with a lesbian roomie, Barbara (Campbell, of course), who waltzes in while Candy's showering. Then there's another roommate, model Peg, who seems to spend all her time with men on the terrace. Of course, it's just a matter of time before Candy ends up in the clutches of Peg's photographer boss, Charlie (Miller), but she manages to avoid taking her top off in front of the camera. That night she and Barbara peep in on Laura having a threesome with two guys, which means it's just a matter of time before Candy loses her virginity to her first crush, only to find Laura in his bed the next night. How far will this apartment full of young, pliable women go to find happiness?

A prime slice of mid-'60s New York exploitation, this one ticks off all the boxes in 73 eventful minutes: booze, jazz clubs, betrayal, multiple sex partners, a stag film party, big hairdos, lesbian seductions, and rampant voiceovers. The actual skin quotient is fairly mild, limited mainly to some cheesecake modeling sessions with Candy and Peg, but the sordidness of the whole thing makes it essential viewing for exploitation hounds. On the other hand, you'll get bare skin galore with the third feature, Three in a Towel, presented by Miracle Pictures. (Yep, you can guess what their slogan is.) There's not much plot here, to put it mildly, but we're told a tale 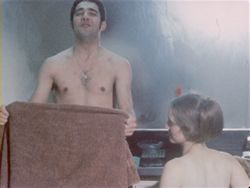 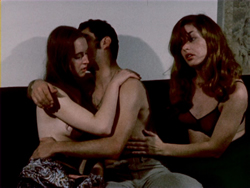 to accompany him on a boat trip during which they can "cruise through sensual waves of ecstasy." She accepts, of course, and off we go for a boat ride with a "cruise crew" consisting of pot-smoking nudist hippie chicks. Joy doesn't take to the idea, but that doesn't stop him from fulfilling his sexy dreams in which naked girls peel bananas and lick each other's knees. But now that his dreams of becoming a new Romeo have been fulfilled, he has to find a woman who will still let him embark on whatever carnal journey he pleases.

Quite possibly the stupidest skin flick you'll ever see, Three in a Towel is a nonstop parade of naked San Fran nymphs, cheap psychedelic effects, and babbling voiceover that really must be heard to be believed. You could very easily find yourself quoting this one at inopportune moments for days if you're not careful. Again the quality for both of these films is great, though Three in a Towel looks like it was shot on pretty lousy film stock with whatever natural lighting was available. That film's theatrical trailer is also included and pitches this as "way out on a floating pad" and "the picture that prevails against existing institutions," such as cinematic competence. If you're looking for a quick three film sample of the very different faces of sexploitation from the mid-'60s into the '70s, this astonishing collection of obscurities is just the ticket.