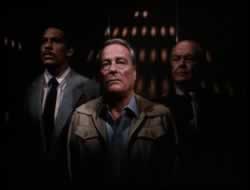 Horror and sci-fi anthology series saw a surprising revival on TV screens in the 1980s, with revivals of Alfred Hitchcock Presents and The Twilight Zone scoring solid numbers as well as impressive casts of guest stars. Predating these by a couple of years was the darkest and most extreme horror ombnibus show aired on American TV, Darkroom, which lasted a whole seven hour-long episodes before vanishing from the air for reasons ranging from ratings problems to considerable pressure from censors and outraged parents' groups. Whatever the reason, it left its mark on a generation of '80s kids and has persisted as a cult favorite despite its extreme rarity. 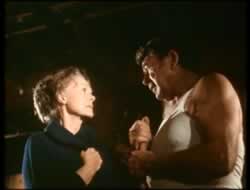 Following a creepy Steadicam opening sequence (probably inspired by The Shining) in an empty house which hurdles toward a sinister darkroom, each episode features our turtlenecked host, James Coburn, wryly introducing tales of terror and the uncanny. The first episode contains two tales; in "Closed Circuit," an over-the-hill newsman played by Robert Webber is offered the opportunity to keep his livelihood if a digital double takes his place, and "Stay Tuned, We'll Be Right Back" is best known as the "inspiration" for the film Frequency as a man who lost his father in World War II discovers that his son's crystal radio can communicate with the German ship that killed his dad. Both feature nasty little twist endings, not to mention interesting supporting casts including Richard Anderson, John Randolph, and Joanna Miles. The first episode was also directed by Halloween II's Rick Rosenthal at the height of his horror career. It's a solid start, but the real fun begins with episode two. In "The Bogeyman Will Get You" (adapted by Psycho's Robert Bloch from his short story), young horror fan DiDi (Quinn Cummings) comes to believe that the handsome new guy in town hanging around her older sister (Helen Hunt) might be a vampire. The short but incredibly potent "Uncle George" (an original tale directed by Rosenthal) features Claude Akins and June Lockhart as an aging couple whose livelihood depends on the money being paid to their ailing Uncle George. When he passes away, they decide to persuade an old, impoverished guy named Dixie (Dub Taylor) to take his place... with a little catch. Both stories are excellent and atmospheric, with terrific shock endings that still pack a punch. Episode three, easily the most infamous of the series and the one that landed it in serious hot water, kicks off with the quick but nasty "Needlepoint," in which an old voodoo-practicing woman (Good Times's Esther Rolle) uses her skills to exact revenge on the irresponsible jerk (Welcome Back Kotter's Lawrence Hilton-Jacobs) who drove her daughter to suicide, but things don't exactly go as planned. Then the great Ronny Cox takes center stage in "Siege of 31 August," adapted from a story by Night of the Hunter's Davis Grubb, as a father determined to beat a military career 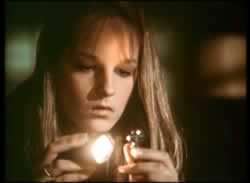 into his young son one way or another. When he tries to ship his kid off to military school, he finds a brutal surprise out in the barn at night... Exactly the sort of thing audiences didn't expect to see on American screens during the honeymoon phase of Ronald Reagan fever, this shocking, powerful episode (which inspired a much weaker imitation with William Hurt in the Stephen King miniseries Nightmares & Dreamscapes) pretty much sealed the show's fate on the spot, but it was still allowed to continue on for an additional four episodes anyway.

Late horror cult favorite Curtis Harrington (Games) chips in as director of both segments from episode four, which is, oddly enough, the least memorable of the series. "A Quiet Funeral" is an okay story of mob funeral shenanigans with The Godfather's Carmine Caridi and busty Hee-Haw favorite Misty Rowe, while Billy Crystal stars in "Make-Up" as a struggling actor who stumbles on a make-up kit that enables him to possibly get away with murder. Both are competent but easily forgotten and not even 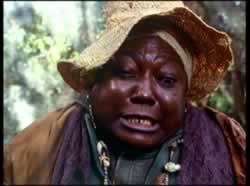 remotely frightening. Things pick up considerably with episode five, which contains "The Partnership" (a fun monster yarn with David Carradine and Pat Buttram about a drifter who stumbles on an unusual abandoned tourist attraction), "Daisies" (a very brief throwaway skit with Rue McClanahan learning an unpleasant secret from a device capable of communicating with flowers), and the viciously enjoyable "Catnip," in which a biker-riding hoodlum (Porky's' Cyril o'Reilly) antagonizes a sinister neighborhood witch (Jocelyn Brando)... and her faithful black cat. The punchline for this one was muted somewhat by censorship problems, but even in its current form, this is a nifty bit of EC Comics-style grue. Trash movie vet Andrew Prine headlines the first story in episode six, "Lost in Translation," a quick bit of Egyptian ooga-booga spookery also starring Whit Bissell, but most of the episode is devoted to "Guillotine," a spirited remake of the classic Thriller episode (itself taken from a Cornell Woolrich short story) about a resourceful French woman (Patti D'Arbanville) who decides to save her convicted lover from the guillotine via a little-known legal loophole involving the scheduled executioner (Michael Constantine). The series' only period piece, it's also a lot of fun and delivers its ironic finale with a lot of panache. The final episode features three equally short stories: "Exit Line" (in which scathing theater critic Samantha Eggar is hounded by a persistent actor looking for a second chance), "Who's There?" (an innocuous sketch about infidelity starring Eight Is Enough's Grant Goodeve that seems to be missing an ending), and "The Rarest of Wines," an amusingly macabre little piece about a spoiled trust fund son (Webster's Henry Polic II) who decides to blow the family's business fortunes on some unusual investments. 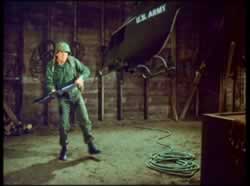 Though it's impressively mounted and features excellent, theatrical-quality music scores by the likes of David Shire and Craig Safan, Darkroom faded away early in 1982. However, four unaired stories were stitched together, minus the Coburn intros but augumented with a gory new prologue to ensure an R rating, and released theatrically the next year by Universal as Nightmares. Oddly, this theatrical incarnation features much more kindhearted endings than the TV series preceding it, which indicates the creators were probably listening to criticism before NBC pulled the plug. Many of the participants behind the camera went on to work on the same network's Alfred Hitchcock Presents revamp (which even features the same font for the episode credits and a very similar atmosphere), but Darkroom remained unseen again except for a reairing in the mid-'90s on the Sci-Fi Channel, complete with great interstitial comments from co-creators Robert F. O'Neill and Peter S. Fischer.

The only home video incarnation of Darkroom to date arrives unexpectedly from Australia's Madman in a double-disc edition which features all of the episodes as originally aired. Image quality is about what you'd expect for an early '80s show shot on film; it isn't amazing, but this is still way better than either of the versions broadcast on TV. Some compression issues rear their ugly heads in a few darker scenes (especially episode two, which sadly looks the roughest of the bunch), but on the whole, it's miraculous NBC/Univeral allowed this puppy out of the vaults at all. The mono audio is English only with no subtitle options. No video extras are included (apart from some unrelated TV-themed trailers), but you do get a fascinating insert booklet containing text from the original pressbook used to drum up sponsor interest. This includes synopses for a number of unfilmed stories slated for the show including a remake of Alfred Hitchcock Presents's "Lamb to the Slaughter," "Evening Primrose, "The Monkey's Paw," Wilkie Collins' "A Terribly Strange Bed," "Thus I Refute Beelzy," and more. If you're a sucker for horror anthologies, this is absolutely a must-see and comes very highly recommended indeed.