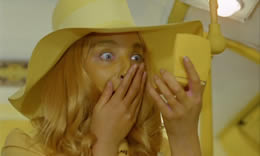 Absolutely true to its title, this third 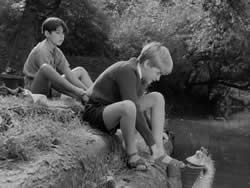 installment in the British Film Institute's ongoing series of Children's Film Foundation collections (following London Tales and The Race Is On) offers a trio of eccentric, kid-friendly fantasies highlighted by the last film by Michael Powell and Emeric Pressburger (Peeping Tom, The Red Shoes).

First up is the sole black and white offering, 1961's "The Monster of Highgate Ponds." Running a tight 56 minutes, it's a whimsical mixture of live action and animation as a young boy named David (Wade) is entrusted with a very round, very mysterious egg his Uncle Dick (Curse of the Mummy's Tomb's Howard) brings back from Africa. Naturally he decides to carry it around and take it to school, where he hides it in his desk. Soon a dinosaur-like critter pops its head out of the egg and starts crying "Mama" in a voice oddly similar to Audrey, Jr. in the original Little Shop of Horrors. Soon the beast is too big to keep hidden, so David and his pals decide to let hang out in a pool at a nearby park -- but soon two unscrupulous showmen decide to get their mitts on the potential star attraction, too.

An amusing little monster diversion, this was one of the later films directed by Alberto Cavalcanti, the Brazilian-born filmmaker who hit his stride at Ealing in the 1940s with Went the Day Well? and the spectacular ventriloquist and Christmas party segments of the 1945 ghost story classic, 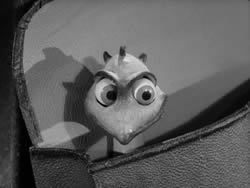 Dead of Night. The animation duties were handled by the married team of John Halas and Joy Batchelor, whose daughter Vivien provides a liner notes essay indicating Cavalcanti find all this childish silliness beneath him. All told it's a perfectly respectable miniature with enough action and silliness to hold up today in the same spirit as live action Disney films from the same period. Plus that monster voice is still very, very strange.

Next is the most familiar title in the set and the reason many will snatch it up: 1972's "The Boy Who Turned Yellow," directed by Michael Powell three years after his last feature-length theatrical film, Age of Consent. Again this clocks in at just under an hour and offers a very bizarre lesson about electricity couched in the story of moppy-haired John (Dightam), 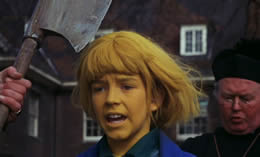 who goes with his class on a field trip to the Tower of London with his pet mouse tucked away to keep him company. Unfortunately the mouse gets loose, which distracts John back at school so much he gets sent home after drifting off to sleep. On the way home on the subway, a burst of electricity turns him along with everyone (and everything) else a bright shade of yellow. Medical attention doesn't provide any explanation, and that night John is visited via his television by an odd person of possibly extraterrestrial origin named Nick (Eddison), who wears a flashing yellow light on his head and takes John on a trip through electrical waves back to the Tower of London. Much mayhem ensues.

Very '70s and wonderfully cracked, this is the sort of story that moves with a childlike kind of logic from one event to the next. It's certainly stylistically interesting, especially when the entire train turns yellow and during the climax when John finds himself apprehended by a bunch of Beefeaters and slated for execution. Not surprisingly, it made a huge impression on young viewers and became a TV and VHS favorite. One really 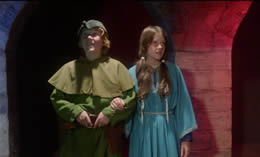 odd factor is the presence of a young Lem Kitaj as one of David's friends, the oddball whiz kid Munro, in his only acting role; he later became Lem Dobbs and wrote films like Dark City, Kafka, and The Limey. There's even an essay about making the film by Kitaj, who calls Powell "a mysterious, proud, and lonely man," explains how they became neighbors when both relocated to Los Angeles, and shares a sweet story about their last meeting.

Only slightly less surreal is 1978's "A Hitch in Time," which earns its stripes with sci-fi fans thanks to the presence 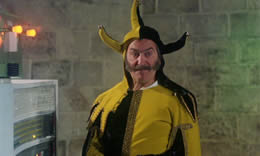 of second Doctor Who incarnation Patrick Troughton. Here he's back to time traveling again as Professor Adam Wagstaff, whose invention -- the Oscillating Shortwave Kinetic Amplifier, or OSKA for short -- is discovered by a pair of inquisitive school kids, Paul (McVey) and Fiona (Mclellan), after he gets trapped inside his contraption. Despite the fact that the inventor with giant sideburns hasn't worked out all the kinks yet, he agrees to send the youngsters flying back and forth through time where they end up in the time periods of Robin Hood, witch burnings, prehistoric cavemen, and other situations way more hazardous than they probably realize. Then the kids -- who were late for school at the beginning -- also have to deal with their stuffy history instructor, Sniffy, who of course can't teach anything as much fun as what the students get to witness firsthand and also pops up as both himself and his ancestors in several of the time periods.

Sort of a pint-sized predecessor to Bill & Ted's Excellent Adventure, this is a breakneck slice of sci-fi lunacy that takes an unpredictable turn every five minutes or so, exactly as it should. Troughton clearly has a great time here, especially dressing up in goofy costumes and bantering with his talking invention, while the time periods are handled with a little more style and invention than usual for a low budget production like this. It's all very late '70s with lots of bright colors and shaggy hair, which makes it a nice juvenile time capsule as well.

All three films are presented on the BFI from new HD transfers, and they looks fantastic. "Highgate" is full frame while the other two are anamorphic widescreen and accurately framed at 1.66:1, with colors so bright they practically pop off the screen. In addition to the essays mentioned above, the liner notes booklet also contains additional pieces by Vic Pratt, Jez Stewart, and a nifty excerpt from Powell's autobiography, Million-Dollar Movie. Fun viewing all around.