A cult film for the mystical romantic in everyone, I Know Where I'm Going has often been overlooked as one of the early masterpieces from the film making team of Michael Powell and Emeric Pressburger, coming hot

on the heels of their previous gemes, A Canterbury Tale and The Life and Death of Colonel Blimp. This time Powell brought his love for Scotland in front of the camera with this whimsical look at a postwar woman who knows exactly where she's going but might not end up exactly where she planned.

After a delightful opening credits montage which provides a thumbnail sketch of headstrong Joan Webster (Wendy Hiller), we meet our heroine as she prepares to head off to Kiloran, an island in the Hebrides. There she intends to marry the wealthy Sir Robert Bellinger, who runs the successful Consolidated Chemical Industries. Along the way she experiences a surreal dream involving tartan-covered hills and her betrothal ceremony to Consolidated Chemicals, but her steely, neurotic edge is gradually whittled away upon reaching Scotland. Waylaid by a nasty fog and an even nastier storm, she spends the night in a room directly across from charming naval officer Torquil MacNiel (Roger Livesy), who takes an instant liking to her. As Joan and Torquil embark 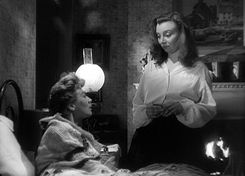 on a journey the next day across the Scottish Highlands, they come across the ruined Castle Mull, home of an ancient curse governing the Lairds of Kiloran. Unfortunately Torquil is the most recent descendant, and he rents space in the castle but tries to downplay his heritage. Despite her shaken sense of destiny, Joan confronts such perils as Torquil's possibly jealous friend Catriona (Pamela Brown) and the terrifying Corryvreckan whirlpool, ultimately emerging a far different person than when she first arrived.

Though essentially light on plot and quite frothy on the surface, I Know Where I'm Going is an inventive feast for the adventurous moviegoer. Hiller and Livesey are both in top form and make a wonderful couple, while the spectacular Scottish scenery allows Powell and Pressburger to craft some of the loveliest visuals in their entire body of work. The delicious twist ending just adds to the fun after the viewer has already been led through several satisfying vignettes mixing together comedy, suspense, romance, and mystery, while the little dashes of surrealism are well integrated and predate a similar approach in The Red Shoes. For maximum effect, curl up and watch this by the fireplace with someone you care about. 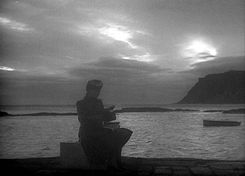 The DVD transfer of I Know Where I'm Going looks pretty much the same as Criterion's earlier laserdisc and the Home Vision videocassette. Despite some mild damage to the print (and a horribly ragged Rank Organization opening logo), the source material is in quite good condition for the most part and does justice to the delicate imagery. The mono soundtrack is rendered as well as possible, given the low budget nature of British sound recording at the time. The DVD carries over the supplements from the laserdisc, starting with the audio commentary by film historian Ian Christie. While better than the atrocious Peeping Tom commentary, this probably isn't something fans will return to very often, though it does contain some nice bits of trivia and offers some worthy historical notes about the time period and the location shooting. Mark Cousins' 1994 documentary, I Know Where I'm Going Revisited, offers an exhaustive look at the film and its fan base, with testimonials from the likes of Martin Scorsese mingling with loving observations about the film and color footage of the breathtaking locales. This featurette has proven surprisingly influential over the years since its laserdisc appearance; in fact, it's remarkable how many DVD documentaries have come to resemble it in recent years. Some smaller scale extras include snippets from The Edge of the World and Return to the Edge of the World, also demonstrating Powell's visual fascination with the Scottish landscape, along with Scottish home movies (with commentary by Thelma Schoonmaker Powell) and Nancy Franklin's photo essay, which elaborates even further on the locations and their history. All in all, the price tag may be a little steep for a DVD, but it's still a lot cheaper than the laserdisc and packs in quite a bit of value for both the film's fans and newcomers alike. 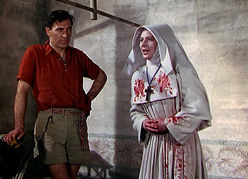 beginning in the 1980s was led primarily by the restoration of Black Narcissus, a feverish, erotically charged, but exquisitely tasteful film harmed by numerous altered or censored versions and critical indifference over the years. The situation has now changed, of course, as this film has now been ranked with The Red Shoes as one of the team's best films and perhaps their greatest achievement ever in Technicolor photography.

Despite numerous warnings, Sister Clodagh (Deborah Kerr) and her holy sisters trek into the wilds of Himalayas, where a former holy palace for 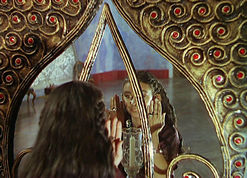 concubines is being transformed into a school and clinic for the local Indian children. The studly overseer, Mr. Dean (David Farrar), ignites previously suppressed passions in the sisters, who are also having difficulty coping with the high altitude, the constantly blowing wind, the carnally tempting murals, and a brewing romance between two of their additional charges, a pompous prince (Sabu) and a rejected young peasant girl, Kanchi (Jean Simmons). Sister Clodagh experiences flashbacks to the one man in her life, a suitor back in Ireland who planned to desert her for America, and begins to contemplate the difficulty in maintaining a spiritual life while surrounding by temptation. The oldest of the group, Sister Philippa (Flora Robson), decides to leave following an unfortunate incident involving a young baby and some castor oil, while the mentally unstable Sister Ruth (Kathleen Byron) develops an unhealthy sexual obsession with Mr. Dean, who barely knows she exists. 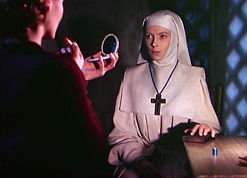 The concept of physically tempted nuns was probably strong stuff back in 1947, though compared to the likes of Ken Russell's The Devils (with which this bears more than a few passing thematic similarities), Black Narcissus is sedate by today's standards, at least in terms of onscreen action. Don't be fooled, however; the film still packs a powerful punch, thanks to the heady intensity of its color photography and the inexorable slide towards a chilling finale, with a beautifully handled, gasp inducing climax choreographed to Brian Easdale's unsettling score. Cinematographer Jack Cardiff, who also photographed The Red Shoes 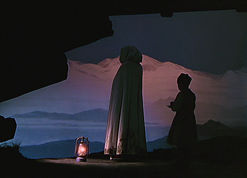 and went on to direct Girl on a Motorcycle, deservedly earned an Oscar for his work here; unbelievably, the entire film was shot in Pinewood Studios except for a few handy exterior shots.

Criterion's earlier laserdisc of Black Narcissus contained the complete British cut, including all of Kerr's flashbacks and the full "lipstick" scene, with a very attractive transfer. The DVD looks excellent as well, but there wasn't a tremendous amount of room for improvement in the first place. Colors look splashy or subdued when they should, and the tiny details in each amazing matte painting are clearly rendered. The commentary track from the earlier disc by Martin Scorsese and the late Powell has been retained here; though not scene specific, it's enlightening and a joy to hear for film buffs as these two pros discuss the various difficulties in mounting an elaborate production like this with such restrictive means. A rather battered theatrical trailer and some rarely seen production stills are also included, as well as a 27 minute featurette, "Painting with Light." This excerpt from an uncoming documentary by Craig McCall dedicated to Cardiff's cinematography covers everything you could want to known about the visual creation of this film and includes a handy visual demonstration of the three strip Technicolor process, as well as a host of interviews with various crew members and appreciative fans like Scorsese.

Long regarded as one of the finest British films and a watershed in the art of Technicolor cinematography, The Red Shoes inspired countless female viewers to take up ballet but, more significantly, also inspired generations of moviegoers to accept art as an integral part of one's life. Of the numerous masterpieces by Powell and Pressburger, The Red Shoes remains the best-loved and continues to enjoy a growing critical reputation.

The opening scenes of the film quickly establish the central theme: people will do anything for the sake of art. Impassioned theatergoers quickly flood into their seats for the debut of a new ballet; comically, they all claim to be there for different reasons - to hear the music, to fawn over the dancers, etc. As the show begins, we are introduced to Boris Lermontov (Wallbrook), a talented but controlling impressario who enjoys full control over his protegees' lives. After the show, he arranges for his next show to present a gentry girl, Victoria Page (stunning redheaded Shearer, making her debut), whose desire to dance overwhelms all social obstacles. Julian Craster, a talented young composer, writes the score for the next ballet, an adaptation of Hans Christian Andersen's "The Red Shoes," about a woman whose acquisition of a pair of a magical red shoes carries a heavy price: she dances herself to death. Julian and Victoria fall in love, much to Boris' consternation, but their happiness is tortured by her longing desire to return to the stage. Art and reality tragically merge together as Victoria finds herself unable to reconcile the two greatest loves in her life.

In a few fortunate films, all of the necessary elements come together perfectly, and this is one of those occasions -- acting, music, writing, and imagery all fuse into a cohesive, magical whole. While the grimmer aspects of the story (Victoria really does suffer!) have turned off some critics, this film's ever-growing cult following focuses on the positive, cathartic aspects of the story, particularly the nobility of sacrifice for one's ideals. The central "Red Shoes Ballet" is a marvel of cinematic craftsmanship and has understandably influenced countless other directors over the years (Martin Scorsese, who participates in the lively commentary here with Shearer and Jack Cardiff, counts it as a personal favorite and even presents his collection of memorabilia for one of the supplementary features). Cardiff's brilliant use of color ranks with his equally amazing accomplishment on Powell and Pressburger's Black Narcissus, and Shearer simply looks radiant in every frame (unfortunately her career, like Powell's, came to a screeaching halt after Peeping Tom).

The Red Shoes has generally fared well on video and TV over the years, but the Criterion edition mastered from the original negative is a stunner. The amazing clarity and vividness of color don't really burst forth until a few minutes into film (the first scenes are deliberately shot with a sort of gauzy overcast), and the results rank up there with the best of the MGM Technicolor musical restorations. A few very mild print blemishes aside, this is very close to a pristine presentation. The DVD includes the same extras as the laserdisc special edition (but at a much lower price), with a few new surprises thrown in as well. The theatrical trailer (amusingly cropped from 1.85:1 so that Shearer is described onscreen as possessing a "bewitching loveline" instead of "loveliness") and Jeremy Irons reading excerpts from the film novelization are nice little bonuses, but the real point of fascination is the Powell/Pressburger filmography, which includes brief snippets from all of their films together. Seeing crisp DVD excerpts from Tales of Hoffman and Stairway to Heaven is enough to make a film buff's mouth water, but even more compelling are the clips from films currently unavailable; a letterboxed fragment from the sadly unavailable Oh Rosalinda! looks especially appealng, so perhaps Criterion will oversee a more comprehensive release of the Powell/Pressburger canon on DVD in the near future. Until then, audiences will just have to be content with this fine DVD package, which is very welcome company indeed.