The fourth and spookiest installment to date in the

British Film Institute's crackerjack series of Children's Film Foundation collections (following London Tales, The Race Is On and Weird Adventures) serves as kind of a pint-sized companion piece to its essential Ghost Stories for Christmas releases. Eerie atmosphere, resourceful kids, and potentially supernatural menace are all constants here in three stories designed for shivery afternoon viewing years before anyone had ever heard of Goosebumps.

Directed by James Hill (A Study in Terror, Born Free), the earliest film of the set (and the only real period piece) is 1976's The Man from Nowhere. Here we have the plight of young Alice (Andrews), who's sent to stay with her wealthy uncle (The Haunting's Adam) in the countryside. Upon her arrival she's startled by a creepy, mysterious figure who warns her to turn around and go back or risk certain danger. She's too rattled to do anything but press on, of course, but the same stranger keeps appearing and issuing vague threats, all of which her uncle seems to dismiss. Meanwhile she makes nice with the local kids who prove to be more receptive to her story, and when the scary stalker proves too much to bear, she faces only two choices: flee as fast as she can, or stay and unravel the real reason for his existence.

As with most CFF films, this one clocks in close to an hour and packs in a large amount of atmosphere, plot, and character development, enhanced here with a terrific (and surprisingly creepy) electronic score by John

Cameron (Psychomania). Andrews makes for a very likable heroine, and the title character's appearances are still quite unsettling even for an adult viewer. Of course, this being a family film it has to dissipate the tension with a climactic revelation that brings things down to the level of a live-action Disney film with the scrappy kids getting the upper hand on the guilty party; however, the film still bounces back with some nifty closing credits guaranteed to leave a smile on your face. It's a fine little spooky tale to start everything, 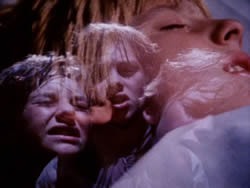 similar in atmosphere to the magnificent Lost Hearts and a good example of low budget '70s chills for the whole family.

Next up we jump to 1984 with Haunters of the Deep, a nifty ghost story that unsettled more than a few impressionable kids at the time. On the coast of Cornwall where pirates used to wreak havoc at Smuggler's Cove, the local tin industry is in flux with the arrival of an American company CEO looking to take over a lucrative mine. One misty afternoon, towheaded local boy Josh (Simmons) sees the ghost of a young boy beckoning him from the hills, near a graveyard where his tombstone can be seen bearing the name "William Bray." No one believes the eerie incident, but things get stranger when a mine collapse traps workers below with little hope of rescue. Aided by other local kids including the CEO's tomboy daughter, Josh has to race against time to solve the ghostly mystery.

Hammer regular Andrew Keir (Quatermass and the Pit, Blood from the Mummy's Tomb and Dracula, Prince of Darkness) adds gravity to the proceedings as a salty local captain, with fellow British horror vet Barbara Ewing (Torture Garden, Dracula Has Risen from the Grave) 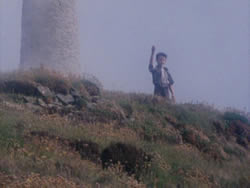 adding solid support as well. The Cornwall setting is the real star here, however, giving the film a rich sense of time and place with an almost Daphne Du Maurier gothic feel at times. Once again there's also a great synthesizer score reminiscent at times of John Carpenter, while the moody mine scenes could also qualify this as a nicer companion to slightly earlier, more adult fare like The Boogens and My Bloody Valentine (or, going further back, The Severed Arm).

Finally we move forward one year with Out of the Darkness, not to be confused with the same year's excellent American miniseries about the Sam of Sam killings. Directed by CFF regular John Krish, it's another story of kids pressed into action by a ghostly prepubescent apparition but this time in Derbyshire. "Who can know the real truth about the past?" is the stock local reply to the questions from siblings Mike and Penny (Flower and Ingham), who are staying with their family in a house linked to terrifying visions of the Black Plague. Accompanied by redheaded local boy Tom (Halliday), they turn to a local historical expert named Julian (The Keep and The Draughtsman's Contract's Carter) to learn the chilling tale that still keeps the town in its ghostly clutches and involves a mystical ring that could be a key to finding out the truth. 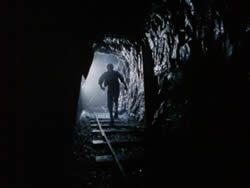 The most typically CFF of the three films, this one hews closely to the idea of a trio of plucky kids scampering around a village watching adults and piecing together a mystery with the aid of low-tech gadgetry. That said, it really kicks into gear withe final third as the kids become stuck out in the woods and inside a cave where a torch-wielding threat from the past, complete with some great stylized lighting and another rocky rescue attempt. (You get a few fancy Steadicam shots, too.) 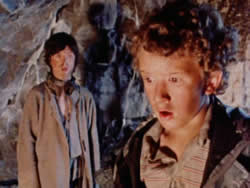 The inaugural release in the BFI's eye-popping 2013 season of "Gothic: The Dark Heart of Film" (with a slew of other rarities slated for video release immediately in its wake), Scary Stories is a great place to start for anyone new to the CFF series and one of the strongest entries to date for those who have already sampled its nostalgic, offbeat charms. As usual the film elements have been kept in excellent condition, and the transfer here look absolutely superb (easily outclassing a cruddy PD American release of Haunters that's best avoided at all costs). The first film is presented in anamorphic widescreen (1.78:1) while the other two are standard, and the framing on all of them looks fine. The liner notes booklet contains the usual array of perspectives on these films including a general overview by Andrew Roberts, the basic CFF rundown by Robert Shail seen in past editions, writer John Tully recalling his experiences on The Man from Nowhere (including a nifty anecdote about the introduction of the pipe organ into the final product), Rachel Moseley covering Haunters, and Carter sharing his memories of John Krish and Out of the Darkness. Perfect viewing whether you have kids around who love a good ghost story or just want something spooky to enjoy on a cold autumn day.