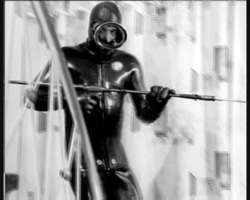 The wave of James Bond imitations multiplying across cinema screens in the mid-'60s seemed to come from every direction, and even Turkey got in on the act with a string of spy and action films that emphasized mayhem and titillation to compensate for considerably lower budgets. Among the more memorable of these is Altin Cocuk ("Golden Boy"), which feels a bit like a Matt Helm movie filtered through the sensibility of Something Weird Video. Right off the bat you get opening titles 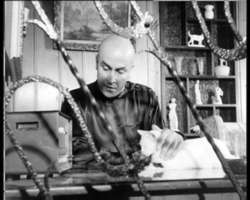 unspooling over a dark-haired, buxom beauty gyrating in her underwear in front of a mirror before shaking her goodies in front of our hero, superspy Altin Cocuk (Arsoy), with whom she hops into bed while a nearby scuba-outfitted villain climbs up the building outside and takes out the stud with a harpoon. "You killed my golden boy!" the woman screams, only for the killer to remove his gear and reveal himself to be... the exact same guy. "He spent five and a half months trying to look like me," he explains, faster than you can say From Russia with Love. "We knew him as 'The Wolf.'" Apparently exerted, he decides to take a vacation and hops a Pan Am flight to London (cue the jazzy travelogue footage with multiple girlfriends), while back in Istanbul, baddies are running rampant shooting people and thwarted secret messages with wild abandon. Turns out this mayhem is all the handiwork of a nefarious, Blofeld-esque bad baddie (Günbay) who enjoys petting a white kitty cat when he isn't plotting to blow up Turkey with a atomic bomb. Can our Golden Boy stop it in time when he isn't distracted by all the belly dancers and extended fist fights? Watch and find out!

The technical caliber of Onar's releases continues to climb surprisingly high with this release, a fast-paced, surprisingly accomplished spy outing that should please any fans of James Bond or his numerous contemporaries. The two leads do a fine job with their comic book-inspired 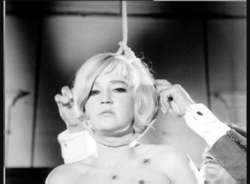 portrayals, and the film doles out kinkiness and violence on a scale that would actually make Ian Fleming proud -- particularly a nasty bit involving a near-naked woman hanging in a noose on a fast-melting block of ice, a scenario later repeated more tastelessly with full nudity and piano wire in Ilsa, She-Wolf of the SS. You also get the old spikes-through-the-celing bit and juicy lines like "I can imagine your screams like a melody," not to mention a few dozen shapely Turkish and European women in bikinis running around. What's not to love? The video transfer is taken from very clean and solid film elements, perhaps the best seen yet for a Turkish film, and apart from some motion blurring during of the action scenes, there's really nothing to quibble about here. The Turkish mono audio sounds fine and brassy, with a nonstop music score including a theme song for our hero and a few incidental bits that will sound more than a tad familiar to fans of Goldfinger's Fort Knox finale.

Along with the usual nifty insert poster, Onar's DVD contains the usual fun array of extras including a new interview with Günbay, an amiable guy who stayed bald through most of the hundred-plus movies he made over the years and whose contracts even included a "shaved head term." Apparently he wasn't a very good swimmer either. Also included are a filmogrpahy of Turkish spy films (including this film's two sequels, which would be great to see as well), a photo gallery, main cast bios, and some tasty Onar trailers both old and new including Casus Kiran, The Serpent's Tale, the Mancini-flavored Rongo Gestapo'ya Karsi, Kizil Tug Cengiz Han, and a fragment of a lost Kilink film without an onscreen title, featuring some more, ahem, "John Barry-esque" music. All in all, it's way up there with Cellat and Kadin Dusmani as proof that Onar just keeps getting better and better.