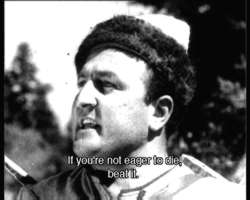 Easily the most ambitious and epic release to date in Onar Films' heroic efforts to salvage Turkish fantastic cinema for the DVD market, Kizil Tug (whose title is translated as "The Red Banner" on the print and is also referred to as "The Red Plume") bears the packaging subtitle of Cengiz Han, or "Genghis Khan," which should give you a pretty good idea of what to expect. The disc sleeve refers to this as a previously lost film and "the oldest Turkish Historical Puplum Sword Film surviving" that "precedes the Italian Peplums by many years and puts them to shame," though if you're expecting a Turkish Steeve Reeves battling monsters, you've got another thing coming. Instead this is closer in spirit to the lavish, over-the-top action spectacles churned out by Universal starting in the mid-'40s (usually starring Maria Montez) like Arabian Nights and Cobra Woman. This is every bit as much fun as its American counterparts, and for good measure, it also tosses in plenty of unexpected nods to Sergei Eisenstein, particularly Ivan the Terrible and a gory montage finale 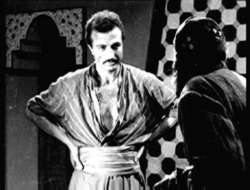 The film starts off with three soldiers in the woods (including Genghis Khan and "Gelman the lion slayer") crossing paths with a slovenly bum (Seyfioglu) carrying a bloodstained sword. The civilian identifies himself as "Otsukarci" and begins a swordfight with the antagonistic feline hunter, only to be interrupted when another small but violent army shows up. Much clashing of blades ensues, and Otsukarci steps aside only to save Khan's life with a well-timed knife throw. Impressed, the warlord calls off the duel and enlists this new Turkish soldier to retrieve money owed him by another leader holding his brother. Thus begins a string of swordfights, horseback chases, espionage, wine-soaked parties with beautiful women, and a furious battle finale.

Extremely fast-paced and without an ounce of fat during its matinee-friendly running time, Kizil Tug is a colorful, entertaining adventure with some surprisingly accomplished action scenes and a charismatic central performance by Seyfioglu. It's a far cry from the DIY superhero Turkish favorite we've all come to know and love, 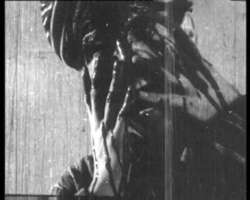 proving the country can turn out rip-roaring fun with the best of em. Onar's DVD comes from the sole unearthed film print, and considering its history, the presentation is well above expectations. The opening credits and final reel display some obvious scratches and other damage, but the bulk of the film is quite watchable with nice contrast levels. Optional subtitles are available in either English or Greek.

Even if this film's genre might make you hesitate, Onar's release is still absolutely essential for another reason: the debut of its full-color, 40-page insert guide to Turkish fantastic cinema, a lovingly-assembled labor of love by Bill Barounis complete with gorgeous ad mats and never-before-seen info and synopses. The guide is divided into horror/mystery, fairy tales/fantasy, karate, historical, western, sci-fi, and superheroes. Prepare to weep with longing as you read about such elusive films as Sevdalim (a hardcore giallo), Psycho Woman ("A sexy psycho slaughters men and women in this sick and bloody obscurity"), and Vahset Kasirgasi (a remake of A Candle for the Devil!). Oh yeah, and apparently Onar is hard at work on releasing Cellat, an "even more violent" remake of Death Wish!

As for supplements on the DVD itself, you get text bios for Kaptan and Seyfioglu, the first 12-minute installment from Turkish Fantastic Cinema (a 90-minute piece picked up by Onar and turned into an ongoing serial-type supplement, consisting of great interviews with cast members along with rare clips usually pulled from scarce VHS tapes), a photo gallery, and trailers for Cici Can (a fun-looking '60s haunted house movie complete with an animated, Casper-type ghost), Altin Cocuk (which looks like a Turkish take on the German Edgar Wallace thrillers), the superhero romp Kaptan Swing, and a really crazy-looking action/nudity '60s curio called Maskeli Ucler.

Kizil Tug is a limited edition of 500 units and is available directly from Onar Films or in the U.S. from Xploited Cinema.