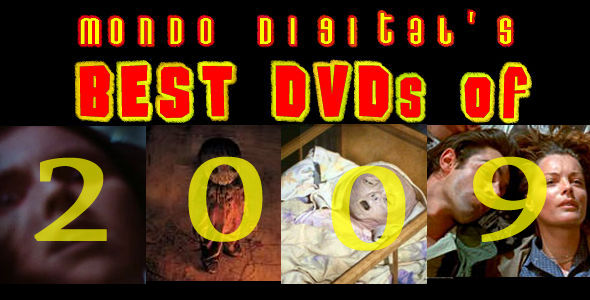 Looks like it’s that time again. It’s been a few years since our last outing, but once again we've assembled a crack team of friends and colleagues to run down their favorite titles of 2009. Even though several of the labels we used to know and love have bit the dust since last go 'round, there’s still plenty of stuff out there, waiting to be discovered. Hopefully we'll turn you on to an overlooked gem or two. So, without further ado…

JARED AUNER
watches as many movies as he can and sometimes writes about them at Worldweird Cinema. He lives in Seattle and has two cats, Ulysses and Agamemnon

REMO D.
has served as the host of the local cable and on-line "creature feature" program Remo D.'s Manor of Mayhem (now in its thirteenth season) since January of 2002. Check it out Fridays at 10 PM Pacific and Saturdays at 5 AM and 10 PM Pacific at www.ampmedia.org by choosing "Programs" and then "Web Stream" for Channel 24. Under the pseudonym "Shane M. Dallmann," he has written for Fangoria, Deep Red, Blood Times, Psychotronic Video, Video Junkie, Ultra Violent and Scary Monsters, and he continues as a regular contributor to Video Watchdog and Screem Magazine.

Scarcely a definitive list, but a fine sampling of the titles I've most enjoyed reviewing over the course of the past year! In alphabetical order, then…

LOUIS FOWLER
is a pop culture critic based in Fort Collins, Colorado. He wears husky jeans. Read his idiocy at louisfowler.com.

Top 5 New Straight-to-DVD (or skipped theaters in my locale, so they are new to me) Flicks:

BRUCE HOLECHECK
is an occasional journalist, sometimes musician and infrequent documentarian. He hates writing but organized this year’s list and felt obligated to contribute. His on-camera interviews with Giovanni Lombardo Radice and Sybil Danning will see DVD in 2010.

Alphabetically, because it was hard enough to pick ten, much less put ‘em in order:

IAN JANE
writes for AV Maniacs and DVD Talk . He lives in New York City with his wife and a dog. In no particular order….

NATHANIEL THOMPSON
runs the website you're reading right now and recently completed DVD Delirium Vol. 4, due for publication this year. In alphabetical order:

STEPHEN THROWER
is a musician and film journalist responsible for Beyond Terror: The Films of Lucio Fulci and Nightmare USA: The Untold Story of the Exploitation Independents, among others. Upcoming projects include Sadomania! A Guide to the Films of Jess Franco and Nightmare USA, Vol. 2. You can keep up to date at the Seven Doors Hotel).

Only a few DVDs have excited me this year - it's been a time of old VHS tapes, ancient Betamaxes and dusty archival viewing for me. However the three most significant releases of the year are among the most important of the decade: