With the giallo craze seizing Italy in the early 1970s, many directors who normally shied away from the genre began dabbling in the blades-and-babes sweepstakes with some truly 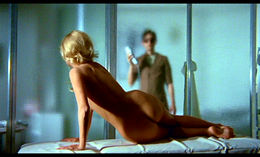 odd results. Best known for collaborating with Gualtiero Jacopetti and Franco Prosperi on Mondo Cane and later ripping them apart with The Wild Eye, filmmaker Paolo Cavara turned to more mainstream fare in 1969 with a middling war drama, The Ravine. Fortunately he got back on track shortly afterwards with The Black Belly of the Tarantula, a stronger-than-usual thriller sporting an eye-popping cast. If ever there was a textbook example of a typical golden age giallo, this is it.

The proceedings get off to an appropriately steamy start with the credits unspooling over footage of naked Maria Zani (Bouchet) getting rubbed down by a blind masseuse, only to return home and face accustations of adultery from her abusive husband. Things get even worse for the poor women that night when she's attacked by a gloved maniac, who pierces her with a needle that leaves her paralyzed as he eviscerates her. The policeman in charge of the murder investigation, Inspector Tellini (Giannini), regards the murder as another dispiriting factor in his desire to leave the force, a decision he bats around with his sensuous wife, Anna (Sandrelli). The number of murder suspects grows during the investigation, with smoky salon owner Laura (Auger) seemingly at 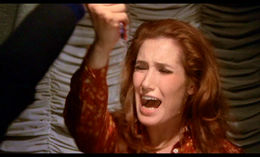 the center of an intricate mystery involving drug-smuggling, affairs, and an increasingly large body count.

Slick, stylish, and utterly enjoyable trash of the highest order, The Black Belly of the Tarantula aspires for much more character depth than usual; in particular, Giannini's domestic life serves as an integral portion of the story and motivates the surprisingly effective climax, which provokes more emotional investmanet from the viewer than normal. The quality of the presentation didn't escape the international community, either, as this became of the few gialli to be distributed by a major studio (in this case, MGM), albeit with a few censor cuts. The film maintains a steady balance erotically-charged imagery and suspenseful setpieces, with one killing deliberately quoting Mario Bava's Blood and Black Lace (which no doubt had more than a passing influence on the entire storyline as well). As with most Italian thriller deriving their titles from animal names, the "tarantula" is a somewhat oblique reference to parallels between the murderer's methods and the tactics a wasp uses to sting and paralyze a tarantula for food. Thus, arachnophobes don't need to worry about scenes involving actors covering in rampaging, furry spiders.

Virtually impossible to see in English following its theatrical release, the film was only issued uncut on video in Japan, albeit in Italian only with 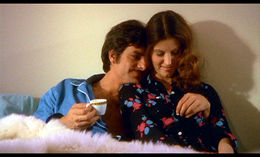 Japanese subtitles. The first DVD arrived from Spain in a mediocre open matte transfer (which throws some of the compositions off balance with far too much extra headroom), again with English options. This version, carried over from the heavily censored US edition, was quickly snapped up by a bootleg label, who added optional English subtitles over what amounts to a long, watered-down trailer without the good stuff. The feature finally arrived uncut on DVD, with Italian and English audio options to boot, from Italy's RHV in a far superior anamorphic transfer, with the theatrical trailer thrown in, too. However, the best buy is easily the Blue Underground edition, beautifully transferred from the original negative and featuring both the English and Italian tracks, with optional English subtitles. Either option is viable, as the scenes with Giannini and Sandrelli were clearly shot in Italian while the rest of the scenes (featuring three Bond girls, a big part of the film's popularity) were performed in English and later looped in post-production. Overall the Italian track fares a bit better, as it sounds a bit more naturalistic and clarifies a few story points obscured in the English dub. Both tracks certainly do justice to the lush Ennio Morricone score, one of the composer's most effective from the period. (Note that some visible debris in some shots during the opening titles is actually dust collected on the glass plates for the credits and is present in all extant versions.) Extras include the full theatrical trailer, a combo TV spot with The Weekend Murders (a fun double bill!), and an Italian interview with Lorenzo Danon (son of the producer/screenwriter Marcello Danon), who shares his memories of being on the set and the various antics of the actors during shooting.