THE BEAST THAT KILLED WOMEN

THE MONSTER OF CAMP SUNSHINE

Genre hybrids are always a lot of fun; we've had sci-fi westerns, horror musicals, and spy comedies, to name just a few. Well, at least twice we've also been blessed with monster nudist camp movies. Naturally Something Weird has managed to preserve both of these gonzo treats on 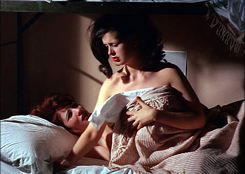 DVD, complete with an onslaught of pulchritudinous extras to give you over three and a half hours of bouncing, fleshy enjoyment.

First up is The Beast that Killed Women, a senseless delight from exploitation legend Barry Mahon, the guy behind such diverse brain killers as Cuban Rebel Girls, Censored, and Santa and the Ice Cream Bunny. This time he gives the raincoat crowd a rampaging gorilla terrorizing the grounds of a Miami Beach nudist camp. Basically it comes out at night and either carries a girl off or tosses her in the swimming pool, but the residents are only mildly fearful. Instead they spend their time playing nude volleyball, hanging out in the sun, and even having a round of bareass 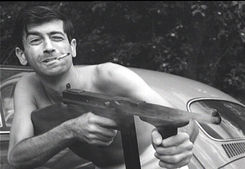 square dancing. Seriously. The girls don't even bother to put on nightgowns when they sleep; they simply bunk up together to protect each other from the scary gorilla, which will look less than threatening to eagle eyed viewers who have ever seen a furry ape suit. Throw in a scared suburban housewife (Delores Carlos) newly awakening to the joys of nudism, her husband played by sleaze master Byron Mabe, a lot of bored looking guys in boxer shorts, and one stunning Sherilyn Feen lookalike, and you've got the recipe for a junky good time.

Then it's back to nature for The Monster of Camp Sunshine, a black and white oddity that quickly divebombed into obscurity and never even merited a legit theatrical release. Nobody seems to have a clue about the real people behind and in front of the camera for this one, which is understandable given the final product. At another nudist camp (this time in New York), the happy and healthy members find their sunny lives turned upside down when Hugo the gardener accidentally chugs some toxic waste from a river recently polluted by a reckless scientist. 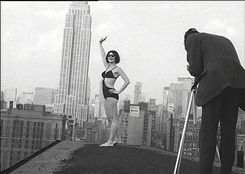 In the meantime we get to see lots of swimming (both in lakes and pools), naked women walking around in the woods, and laughably bad stock footage, culminating in a mindbending climax which finds the military launching heavy artillery at the deformed Hugo, scorching a few ill-placed nudists in the process as they roll around on the ground screaming. Can you prove it didn't happen?

The above synopses should be enough to convey the nature of these films, which certainly aren't anywhere close to good but don't qualify as boring, either. Beast will probably be the more accessible to most viewers thanks to its lustrous color palette and gorgeous women, who have that full-bodied covergirl look that seems to have gone out of style now. The transfer is a real knockout, taken from a pristine source 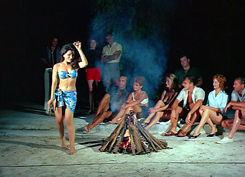 and ripe with chroma more suitable to a Vincente Minnelli MGM musical. Monster was obviously shot on a shoestring (and a ragged, chewed up shoestring at that), so the black and white print is most likely the only one that even exists.

Of course, since this is a Something Weird disc, the movies are just the beginning. Hold on to your hats for a full blown drive-in tribute devoted to the nudist experience, complete with trailers for Goldilocks and the Three Bares, Nudes on Tiger Reef, Nudist Life, The Beast that Killed Women, Pussycats Paradise, and Eves on Skis, as well as a twisted little Easter Egg hidden on the trailer page. Don't approach that hidden goodie if you're easily offended, however -- but then, you probably wouldn't be looking at this disc in the first place if you were. Then there are the featurettes: Bring 'Em Back Nude, a 1920s short on nudism complete with some startling flashes of pubic hair; The Expose of the Nudist Racket, a dated and amusing little take on nudism as moral corruption; Naked Ranch, a weird little western nudism thing that looks more like an experimental film; Beauty and the Beast, another burlesque bit in keeping with the main feature's killer gorilla; Back to Nature, a '50s nudist short in the vein of those H.G. Lewis and Doris Wishman features; and the riotous Nudist Fashion Show, which features bare bosomed lovelies showing off the latest international fashion accessories. Can you bare it?