You know you're in for a strange film when the opening sequence carefully lays out the daily routines of the British aristocracy, only to finish with the prim, aging head of the household, the 13th Earl of Gurney, casually accepting his

butler's help while he plops his neck into a noose, slips on a ballet tutu, and prepares for an evening of kinky fun only to wind up hanging dead from the ceiling. The entire family is thrown into an uproar when the family attorney reveals everything now goes directly to the most insane Gurney, Jack (Peter O'Toole), who happens to think he's God and Jesus at the same time. The solution? Simple, of course; they marry him off to gold digging Grace Shelly (Carolyn Seymour) to produce a more acceptable heir. While Grace is busy pretending to be Jack's own personal Camille, the scheming Lady Claire (Coral Browne) consults and beds Dr. Herder (Michael Bryant) in order to bring about a more immediate solution: to cure Jack with the aid of the unforgettable Electric Messiah. This shock tactic seems to work at first, but another iconic personality begins to emerge, this one not quite so kindly as the first.

Not exactly the most consistent director around, Peter Medak has dabbled in everything from top notch suggestive horror (The Changeling) to anonymous garbage (Species 2). In keeping with this track record, The Ruling Class is basically as good as the talent Medak has in front of and behind his camera; fortunately, said ensemble is quite 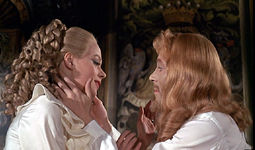 formidable in this case. O'Toole turns in one of his best performances (or maybe two performances, technically) with a belated entrance to die for, and while the tonal shifts from rollicking comedy to eccentric musical numbers to bitter horror are sometimes more than the film can bear, Medak and company generally keep things bizarre enough to maintain interest. If you don't like a scene, have no fear; something completely different lies just around the corner.

As with most Monty Python skits, the potentially blasphemous bits are handled in such a ludicrous, unrealistic fashion that it never becomes uncomfortably offensive; the object of attack here is more the institution of the Church of England rather than the concept of divinity itself. While Browne does a great job as usual doing her viper tongued routine and Sim does his expert doddering bit, the usually underused Seymour actually impresses most now among the supporting cast in perhaps the second most difficult role. Whether addressing the camera, switching from strumpet to virgin in the blink of an eye, or doing an athletic wedding night striptease, she's always an interesting presence and even offers the most affecting, memorable moment of the film's oddball climax. Probably not a surefire bet for everyone, but recommended viewing and quite a welcome entry on DVD from Criterion.

To say that this transfer 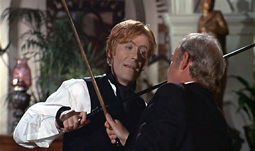 obliterates its predecessors doesn't say much considering this Avco Embassy title has been out of circulation for many years, and its previous video transfers were hideous to behold and brutally cut by at least 13 minutes. This complete edition (the first such video release in the U.S., though the full version has aired overseas a few times) looks as good as the original film ever could; mostly it's clean and colorful, though some of the darker footage during Jack's turn to the nasty side looks more grainy and unstable than one might expect. The mono sound is fine, but some of the dialogue was noticeably looped in later and, aside from sounded occasionally canned, slips in and out of synch with the actors' lip movements. (Just check out "Dem Bones" for one egregious example.)

Apparently becoming more amenable to the idea of commentaries, O'Toole joins Medak on the commentary track for a fairly thorough look at the making of the film. Much time is spent discussing the actors and the differences between the stage and screen presentations; having spent time behind the mic already for the aforementioned Species 2 (how's that for contrast?), Medak seems more comfortable and chatty despite his sometimes thick accent. Both men obviously still feel a great deal of affection for the film, and while it's questionable how much immediacy it will have for new viewers without a cultural frame of reference in which to place it, there's no question that The Ruling Class deserves the royal treatment it receives here. Other extras include the understandably vague British trailer (talk about a hard sell!) and over thirty minutes of silent home movie excerpts showing the cast and crew at work and play during filming. Choose your own musical accompaniment for this particular supplement, which will seem pretty dry if your ears don't have anything to do.