Arguably one of Pete Walker's best films, Frightmare turns the Anglo Saxon concept of the family unit upside down with a diabolical, 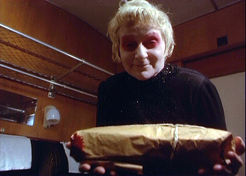 unflinching narrative that follows its doom-laden train of thought all the way to the bitter end. Using cannibalism as a destructive force that cuts through generations both old and young, this is horror at its most dangerous and unsettling.

In a black and white prologue, Dorothy Yates (Sheila Keith) is sentenced to rehabilitation in a psychiatric ward after her uncontrollable taste for human flesh is uncovered by the local police. Her spineless husband, Edmund (Rupert Davies), is sentenced along with her, leaving their daughter, Debbie (Kim Butcher) in the care of Jackie (Deborah Fairfax), Edmund's child from a previous marriage. Years later, both Dorothy and Edmund have been released and live an isolated life out in the country, where Dorothy passes the time by reading tarot cards. 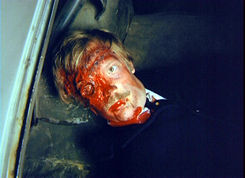 Meanwhile in London, Debbie has become an embittered juvenile delinquent, much to the dismay of Jackie and her doctor boyfriend, Graham (Paul Greenwood). Jackie has kept the truth hidden from Debbie and makes occasional trips to the country, where she delivers oddly wet packages of meat to her parents. Unfortunately Dorothy's bloodlust continues unabated, with many customers falling prey to her crafty work with power drills, pokers, and sharp kitchen implements. Although Jackie begins to suspect that her family may be crumbling around her, there are even darker, more terrifying secrets ready to erupt.

While everyone involved in Frightmare 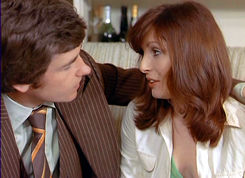 seems to be giving their best, this is unquestionably Sheila Keith's show all the way. This rare leading role for the Walker regular allows her to run the gamut from a tremulous and confused aging woman to a crazed, bloodthirsty maniac in the span of a few seconds, and her attacks are shocking, explicit, and intense, even by today's standards. Walker cleverly subverts expectations by pointing out that corruption stems not from the "free" swinging lifestyle shown at the beginning of the film, but rather from barbaric familial practices spread down from one generation to another and which fester right under the noses of polite society. From a technical standpoint this is also one of Walker's most accomplished 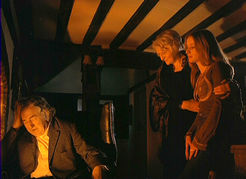 features, with his usual knack for creating an oppressive atmosphere serving him well as he contrasts the bustling city life with the dark, damp, lonely country locations, all enhanced by a chilling Stanley Myers score. Just be warned that this is not a happy ride, and while one can almost always expect a downbeat ending for a Walker film, this one takes that expectation to new extremes.

Frightmare first appeared on U.S. video under the title Frightmare II, to avoid confusion with a later unrelated American horror film. It was later reissued as Once Upon a Frightmare, and both transfers left quite a bit to be desired. The print used for all extant DVD editions is a marked improvement in every respect and actually looks quite colorful, a welcome change from the gray, blearly looking VHS editions. Note the beautiful saturation of the colors during the opening credits, which come as a visual shock after the lengthy monochromatic first few minutes. The open matte, full frame presentation on the Euroshock/Image disc reveals all of the visible film area, leaving a little more headroom than usual but aesthetic enough all the same. This being a '70s British film, grain and unstable blacks crop up here and there, along with some fleeting and minor instances of film scratches, but the pros far outweigh the cons here. The mono audio sounds fine, approximately the same as the earlier versions. The Media Blasters and Anchor Bay UK editions present the original theatrical matted edition and look very nice, also tossing in a Walker interview and commentary as well as trailers into the mix. 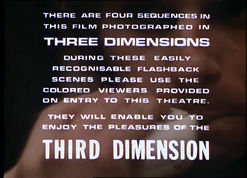 Before he briefly became Britain's most significant horror filmmaker in the 1970s, Pete Walker earned a decent living cranking out frothy sex comedies like Cool It Carol and School for Sex. More technically polished and elaborate than, say the British Confessions of... series, these films aren't particularly outstanding works of exploitation but do hold their own within their limited genre. One of the odder entires, Four Dimensions of Greta, threw in the added gimmick of four 3-D flashbacks (filmed in black and white with the old red and blue glasses routine), a device Walker used to more grisly effect the same year for the finale of The Flesh and Blood Show. 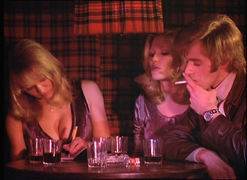 soap actor Tristan Rogers) pulls out a photograph of a beautiful blonde woman and ponders his current circumstances. Recruited by his publishing magnate boss over dinner for a "business trip" to London, Hans has actually been asked to track down the missing Greta, who has apparently been swallowed up without a trace by the swinging scene of London. Hans reluctantly leaves his idealistic girlfriend and, upon his arrival in the big city, promptly descends into a world of swinging underground clubs populated by topless dancers and easy girls willing to share their stories about the saucy, naughty Greta. The first tale, told by a chunky naked woman stuck to a piece of clear inflatable furniture, depicts Greta as a freewheeling slut who scared the other girls with her joie de vivre. Then the requisite savvy black swinger tells her own tale about working with Greta at a strip joint where the title character performed a bizarre nude routine involving lots of billowing white blankets. Then it's on to the maimed Roger (ubiquitous British sex comedy star Robin Askwith), Greta's purported boyfriend, who offers a much more loving, wholesame take on their relationship. Greta's "fourth 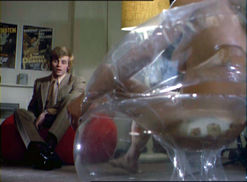 dimension," according to one of her older acquaintances, was trading her charms (including massages) to tease men and provoke them into fistfights. Eventually Hans sorts out the truth, and with the help of Roger and a little tedious slapstick action all eventually becomes right with the world again.

While the idea of 3-D sex films sounds too tawdry and surreal to resist, few films have actually made good use of the concept. Greta is no exception, with only a broken bottle and the occasional bare breast thrust into the camera during the four flashback scenes. Most of the 3-D footage looks more stagebound than the rest of the film, whose gaudy club scenes and abundant displays of frontal nudity would have been better chosen to come leaping out into the audience's lap. Fans of '70s kitsch will have a ball with the post-mod fashions, tons of hipster lingo, and the goofiest phony German accents ever recorded on film (and yes, that includes The Producers). The 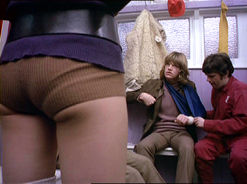 music score ranges from an outrageously tacky theme song to a fairly decent instrumental score, though it never scales the delirious musical heights achieved by continental sex comedies around the same time in France and Italy. The extras, which can be a little daunted to track down, include a U.S. theatrical trailer (apparently, yes, it did play outside the U.K.) and a smattering of stills and theatrical posters.

As with Walker's other films, Greta was shot open matte with an eventual matting job between 1.78:1 and 1.85:1 planned for its theatrical presentation. The full frame DVD looks fine overall, though the print reveals some distracting battering and staining during the next to last reel. Colors are fairly dull throughout most of the film, but the occasional vivid splashes of red and blue lighting reveal this was probably intentional. The 3-D effects work about as well as most other DVD attempts; it's passable but not as effective as the theatrical experience. The glasses included in the box must be held in front of your eyes at all times and can't be propped, making one thankful for the relative brevity of the 3-D scenes. No extras apart from a filmography.