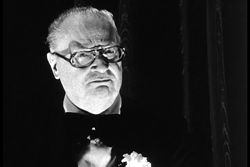 through 1960s Twilight Zone surrealism, this hour long cult item garnered some fan word of mouth at festival screenings and through its VHS availability through Sinister Cinema. After an amusing prologue which finds Famous Monsters guru Forry Ackerman cautioning sensitive viewers about the nature of this film (a la one particular Universal horror classic), we meet young Jamie (Melissa Baum), a babysitter about to embark on a peculiar voyage thanks to her latest charge, a young infant with a very disturbing secret. The butler, Twelvetrees (Phantasm's Reggie Bannister), cautions her about the danger of both her newest employers and their spawn, but of course she stays around for all the monstrous fun. 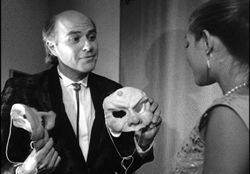 Stuck somewhere between a short film and a full feature, That Little Monster's plot treads in the same territory as Eraserhead and It's Alive while conjuring up some unsettling narrative and visual tricks all its own. Most of the laughs come off quite well, including an unexpected celebrity cameo near the end that will leave many viewers scratching their heads. The camerawork is the real star here, capturing a queasy yet amusing ambience of eccentric terror in which the viewer's eye is catapulted through some amazingly odd cinematic gymnastics. On the other hand, even at an hour the film can be difficult to take, especially for those who think Tim Burton's enforced weirdness can sometimes wear out its welcome; however, those predisposed to directors who have no idea when to quit will be able to overlook some of its flaws.

Most widely seen via VHS distrib 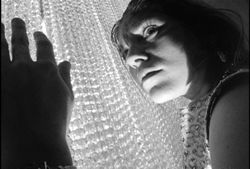 uted by Sinister Cinema, That Little Monster has been upgraded considerably for DVD. Though the source material still looks understandably grainy and overly contrasty at times due to the limited budget and film stock, the appearance here is overall quite satisfying. (And in what may be an odd homage to either Hitchcock's Spellbound or Roger Vadim's Blood and Roses, the single color-tinted image is present and accounted for.) The disc also includes a commentary track by director Paul Bunnell with editor and producer Carl Mastromarino; they offer some vivid recollections of working on the film and explain how some of the most audacious visuals were accomplished for very little money. Also included is a 19-minute short film by Bunnell, "The Visitant," another nostalgia-laced horror project. Made in 1981, this mixture of George Romero and The Twilight Zone shows how far the director advanced technically in a fifteen year period but makes for interesting viewing on its own. Finally there's what appears to be a cable access interview with Bunnell, who comes off as hyper and hammy, evidently the effect intended. The interview seems bemused throughout and offers up a few clips from the film itself for good measure. Incidentally, ignore the unappealing cover art, tagline, and amateurish layout on the back of the box; that old saying about judging books by their covers applies to the DVD world, too.