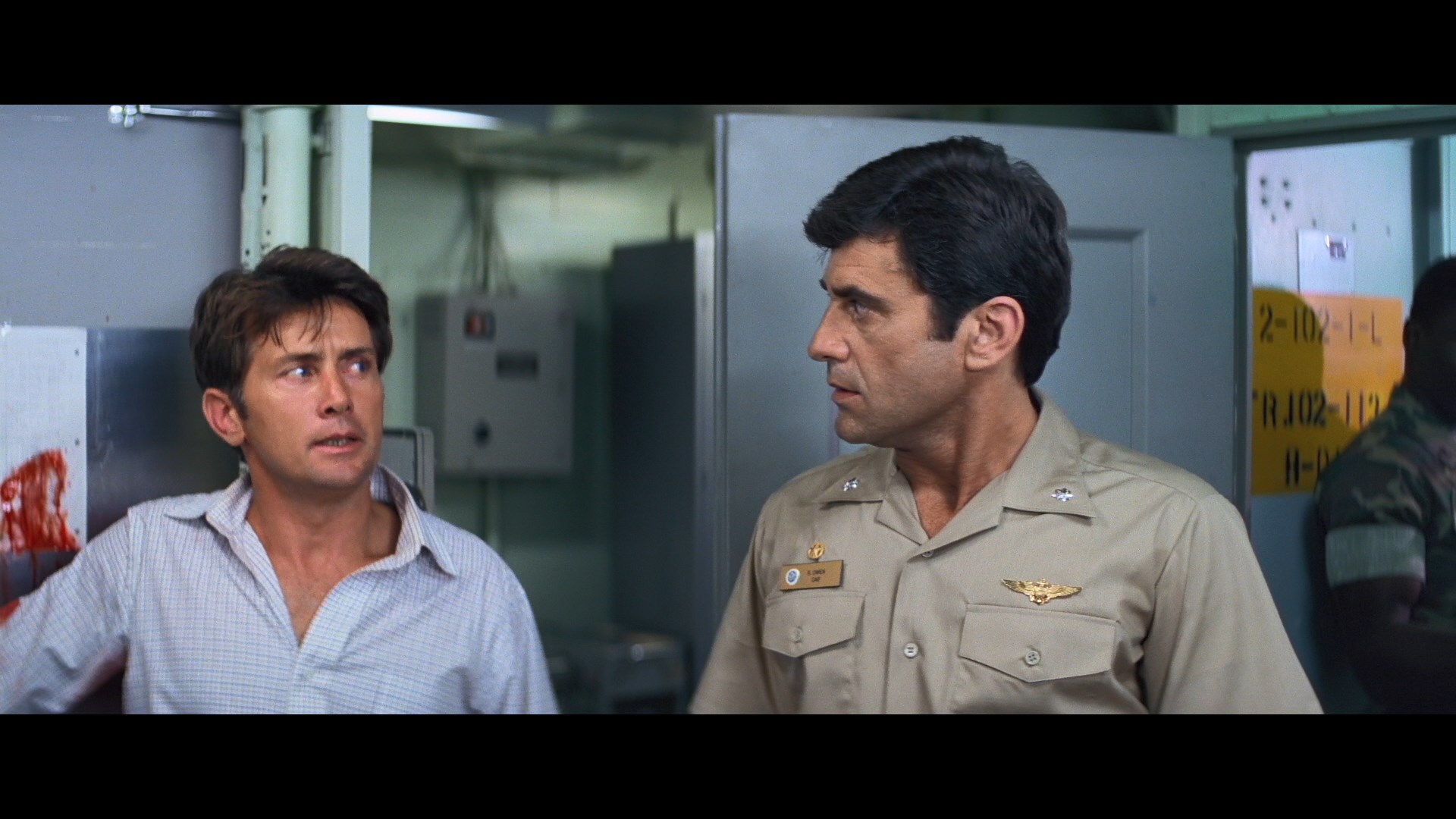 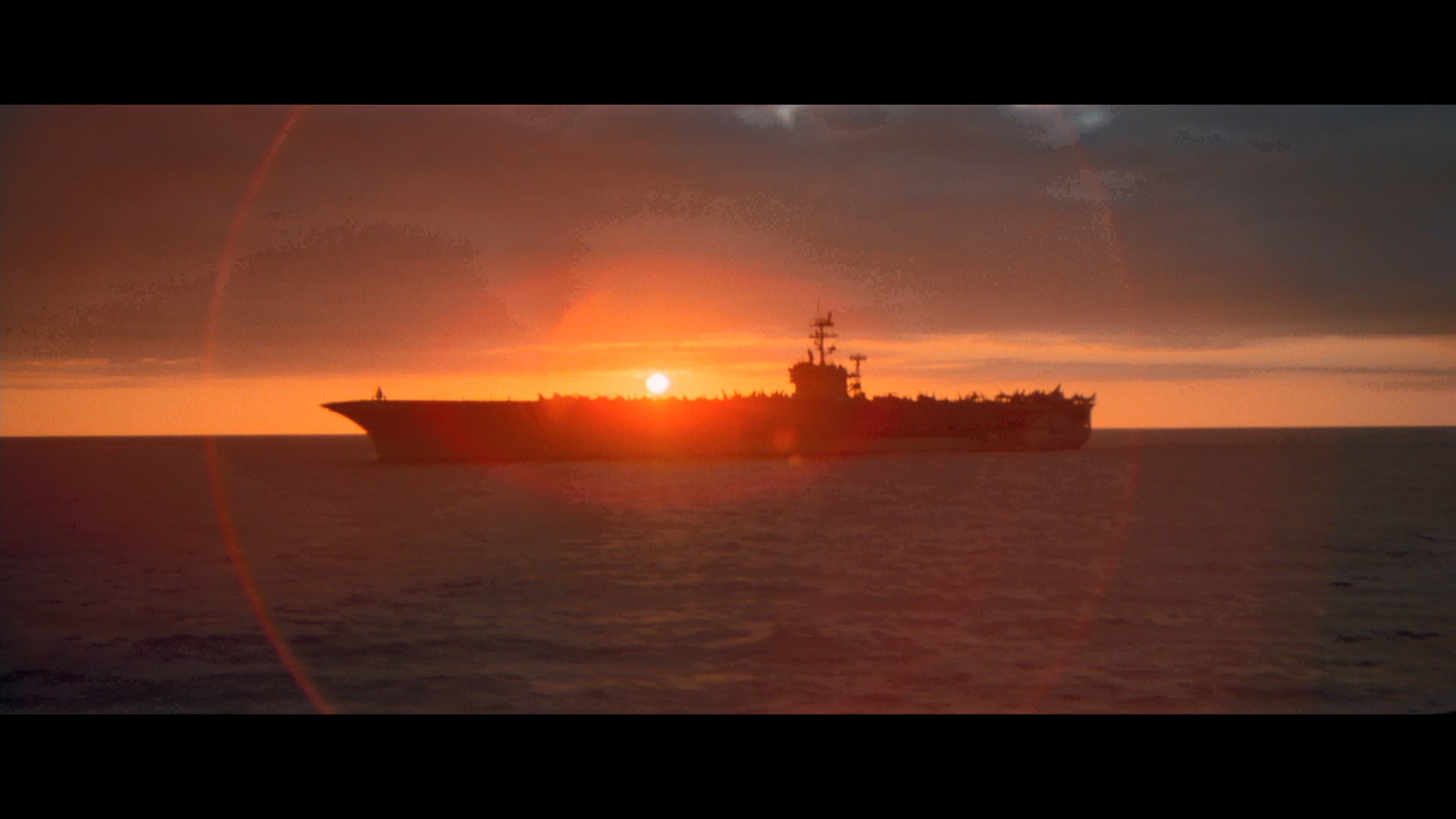 Lasky (Sheen) arrives aboard the atomic-powered aircraft carrier U.S.S. Nimitz for an efficiency inspection in Hawaii, Captain Yelland (Douglas) steers the vessel through the ocean only to encounter a freak storm, complete with a swirling blue vortex that carries the ship and its crew back in time to 1941. Soon they're picking up Japanese communication signals and rescuing Senator Chapman (Durning) and his aide, Laurel (Ross), from a boating accident - both opportunities to alter history, since the Japanese are about to attack nearby Pearl Harbor and Chapman was lost at sea during the attack. Now the men face a dilemma: should they use their modern weaponry to change the course of history or allow world events to proceed as intended?

An intriguing time travel yarn initially lost in the early '80s glut of sci-fi and disaster productions, The Final Countdown features a great story hook straight out of the Twilight Zone manual and a staggering cast for an independent feature, ranging from top-A Hollywood talent to Superfly himself. Using the real Nimitz (with Navy approval, more or less) and a variety of actual U.S. and Japanese planes for the dogfight sequences, The Final Countdown has become a notable cult favorite over the years despite its middling critical reception. True, the film could have probably done more with its concept, but the result is still enjoyable popcorn fare and the supporting cast alone is a once in a lifetime opportunity. Fresh off lovable, grade-A Velveeta like The Swarm, Holocaust 2000, 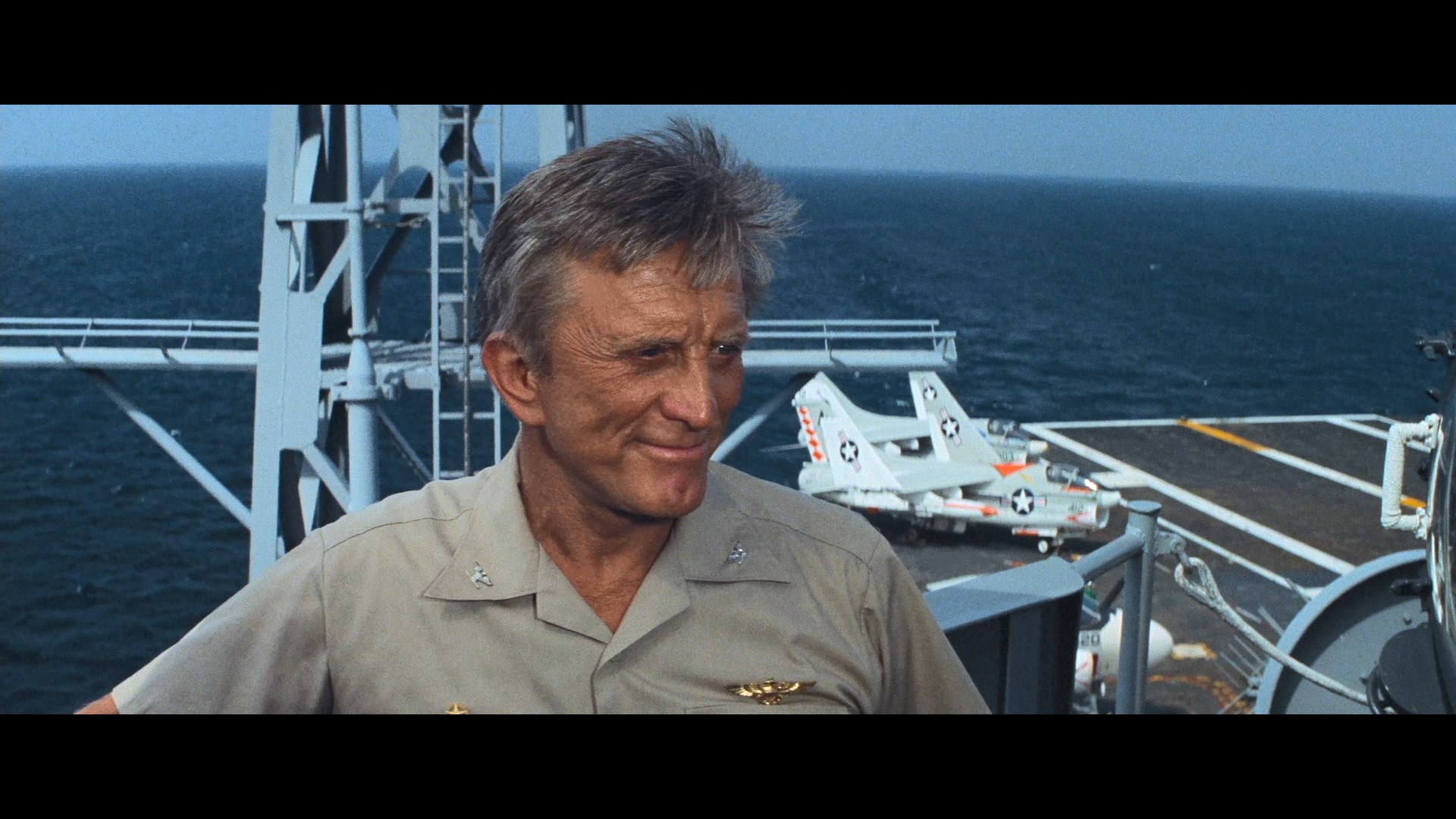 and The Legacy, Douglas and Ross probably didn't have a problem with the script's drive-in aspirations; likewise, 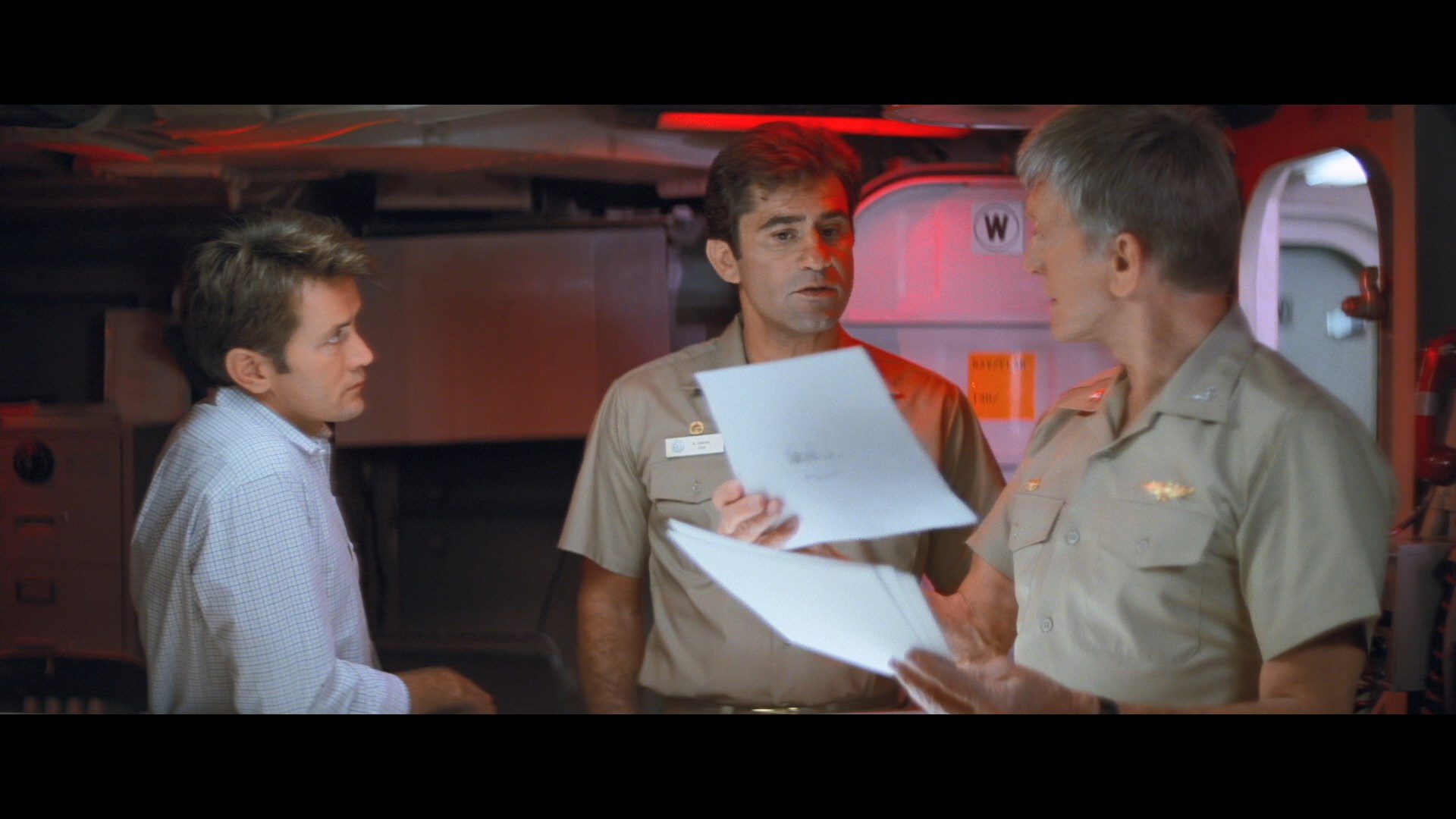 Sheen (still mostly likely exhausted after Apocalypse Now) carries his role with his usual professionalism. Of course, the real joy lies in watching scenery-chewing vets like Durning, James Farentino (just before Dead and Buried), and blaxploitation vet Ron O'Neal grappling with the historical quandaries of the storyline while surrounded by a dizzying array of actual fighter vehicles blasting across the screen. Sci-fi fans might want something a little headier, but for a pre-Tom Clancy naval thriller, The Final Countdown more than delivers. Director Taylor (best known for Damien: Omen II) exhibits his usual confidence with the Panavision frame (which suffered royally back in the pan-and-scan VHS days), while the underrated John Scott (Greystoke) supplies a rousing, gripping music score reminiscent of the best of Rosza and Korngold. As for the story itself, the basic time-loop gimmick goes all the way back to shows like Tales of Tomorrow, with the basic idea wrapping itself around in a fashion that sometimes frustrates viewers in our post-Michael Bay society to expect a big slam-bang, pyrotechnic finale where one really wouldn't be possible. As with Alfred Hitchcock's The Birds, the restrained resolution offers a narrative solution that hopefully adheres more closely to how military men would handle such a situation rather than how bloodthirsty masses would choose to see it concluded. Also noteworthy is the storm sequence itself, which bears more than a passing resemblance to the disco-light love scene from 1979's Dracula-- no surprise really since 007 credits creator Maurice Binder designed them both.

Early DVD versions of The Final Countdown sprang up in a number of countries in the early '00s; the German and Dutch discs offer anamorphic transfers with 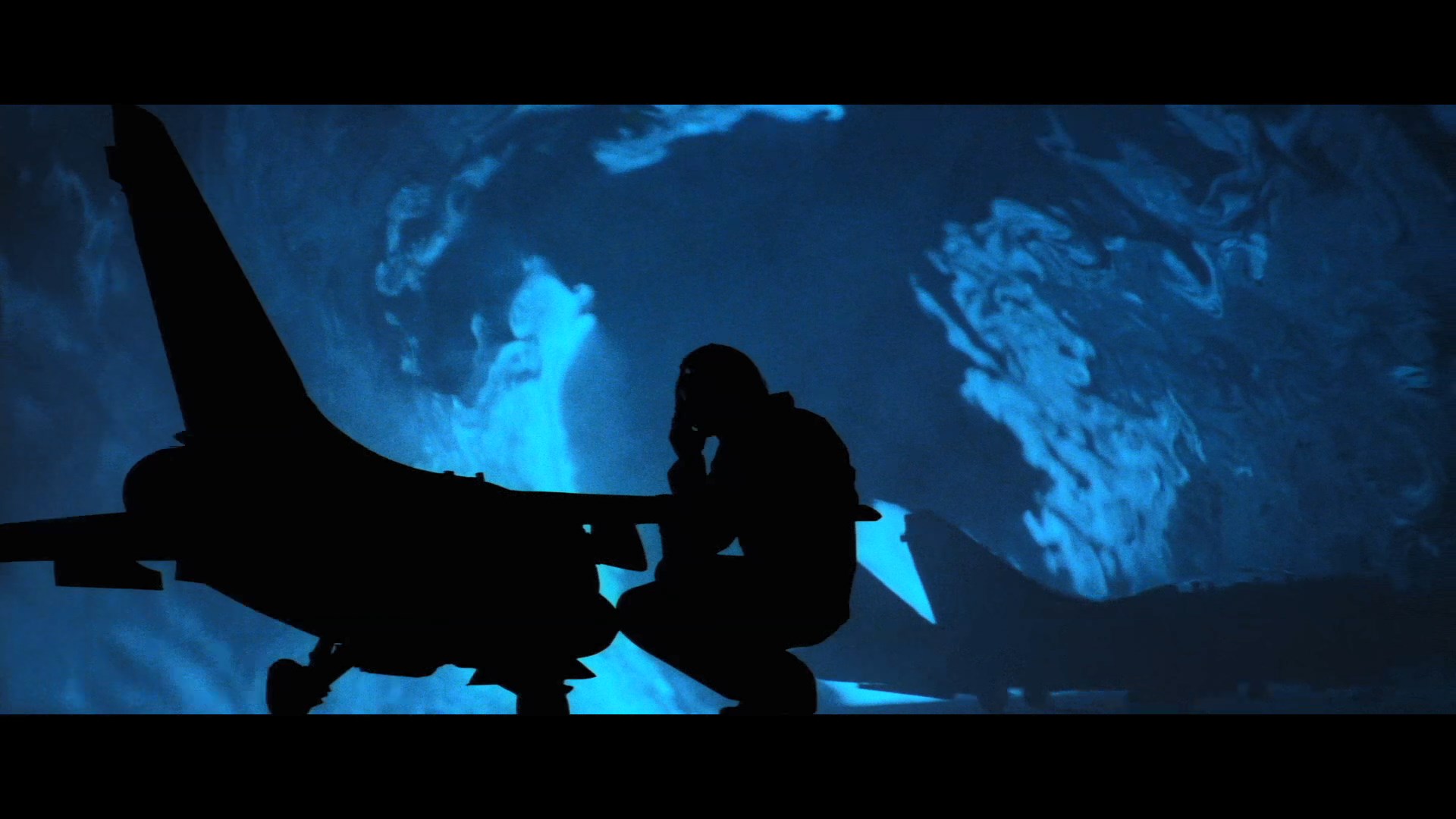 standard two-channel audio remixes, accompanied by the trailer, while the British/French variant offers a 4:3 letterboxed edition. An earlier, bootleg U.S. disc also popped up in some bargain bins with a 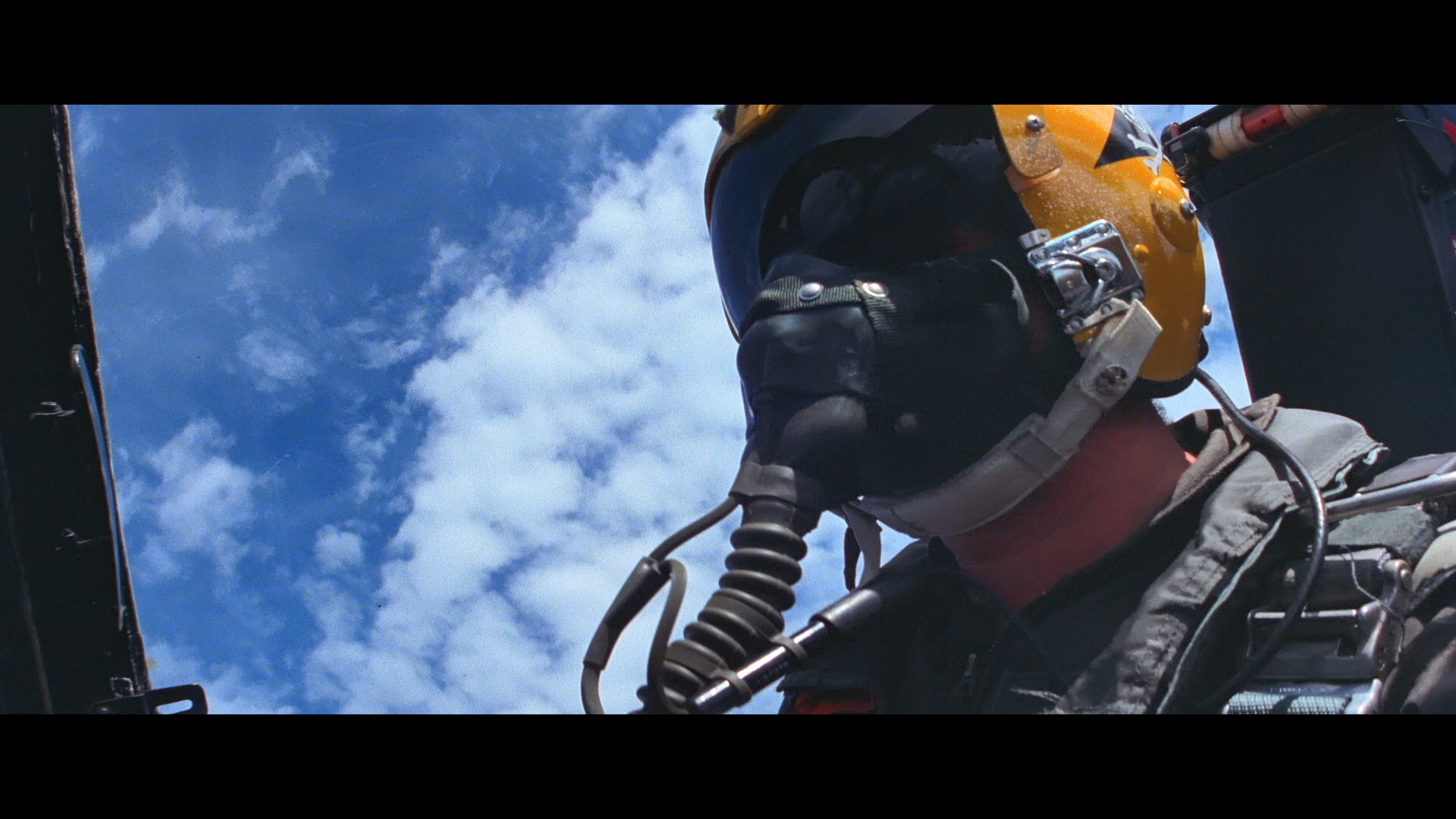 badly converted widescreen transfer and was thankfully rendered extinct rather quickly. This brings us to Blue Underground's edition, which first popped up on DVD in 2004 offering three different ways to experience the film. Their SD package came in single-disc variants in widescreen or full frame, or a double-disc set containing a second DVD packed with extras. The THX-approved transfer from the original negative looks quite slick in any incarnation, and the audio overhaul (in 5.1 or DTS options, or a two-channel version) offers plenty of bombastic fun with whooshing aerial effects and split surround music effects often filling the speakers. A great demo piece, this is one of the better early '80s transfers out there in standard def. The feature also includes an audio commentary with cinematographer Victor J. Kemper (who did Xanadu and Night of the Juggler around the same time - talk about range!), moderated by Severin Films' David Gregory (who was with Blue Underground at the time). It's a very technical but interesting track, mostly discussing the ship itself and the various challenges posed by shooting such an elaborate film with very limited special effects. The feature also contains optional subtitles in English, French and Spanish. Disc two contains two featurettes: "Starring the Jolly Rogers: Interview with the Jolly Rogers F-14 Fighter Squadron," a surprisingly candid and enjoyable half-hour discussion with the men who piloted the jets in the film, and "Lloyd Kaufman Goes Hollywood," a 14-minute chat with the notorious Troma guru who explains in unflinching terms how his stint as associate producer on this film drove him to go the completely indie route with his own company. Also included are four artwork and still galleries with a heavy focus on behind-the-scenes shots and coverage of the ship itself, an American pressbook, a Douglas bio, and a DVD-Rom feature, "Zero Pilot's Journal,"an account of the Japanese fighter plane experience during the film told in language heavy in aviation-speak. Needless to say, the unrelated hit song by Europe (whose catchy opening bars get belted out by anyone when you mention this film) is nowhere to be found here.

The advent of Blu-ray meant this title, one of Blue Underground's strongest sellers, was first out of the gate. Some of the '80s film lab methods are more 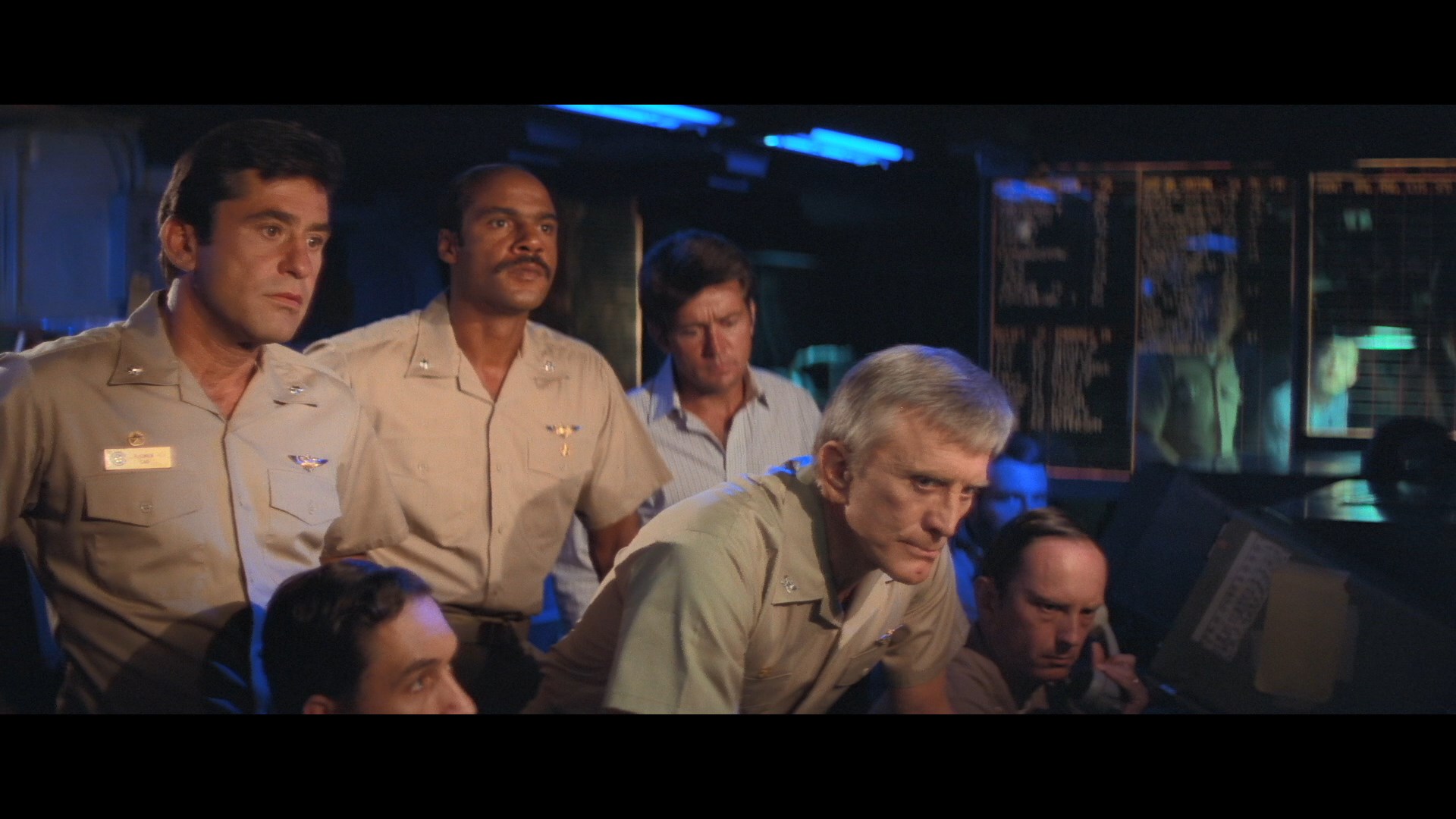 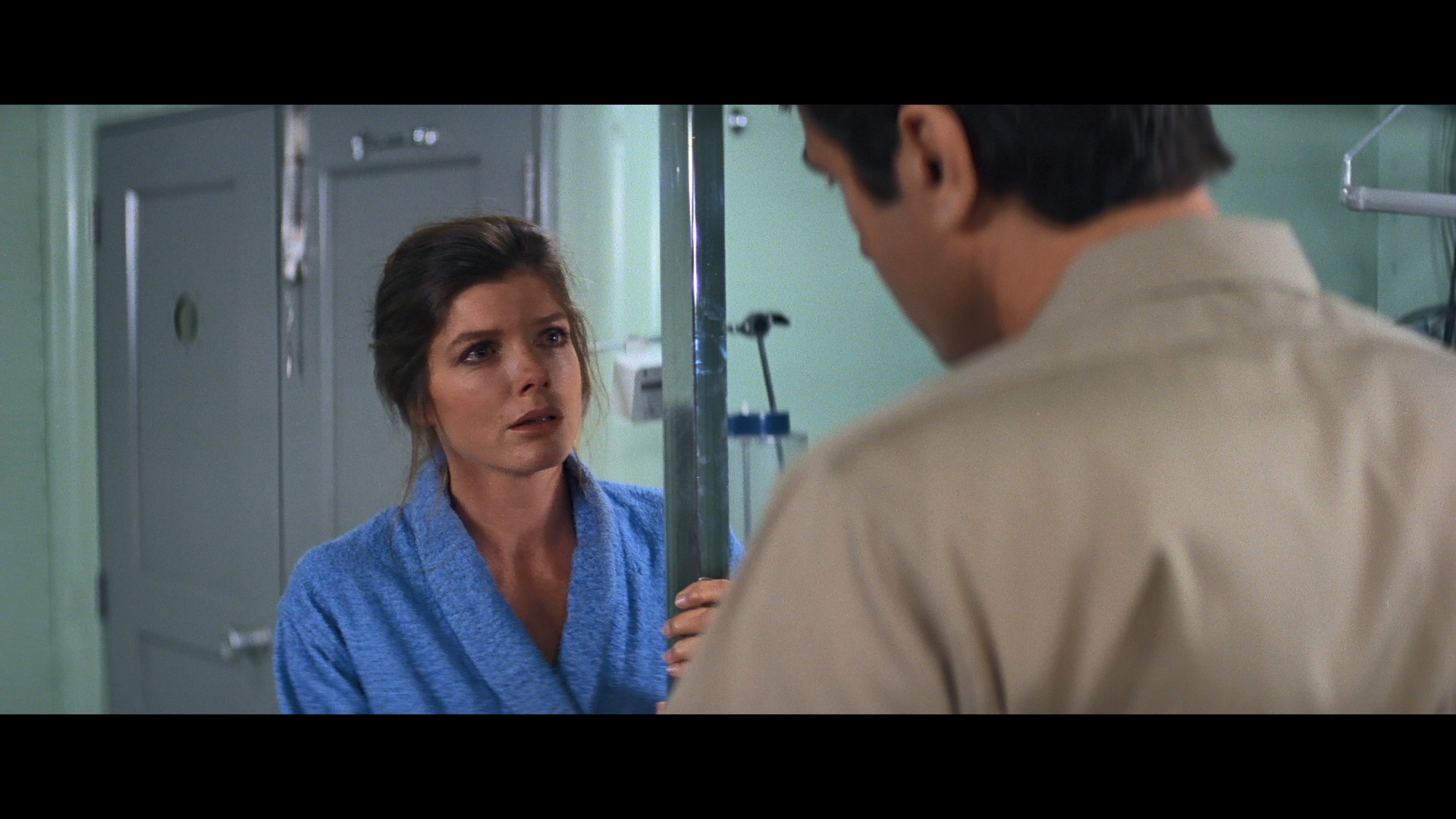 distortion caused by the anamorphic lens filming), but the gains are more than worth the upgrade. Film grain is still present and accounted for to a minimal degree, but some of the more problematic areas (especially those bright blue skies during the opening scenes, which had a digitally jagged look on larger screens) now look much more natural and film-like. Obviously the detail of both the actors and the aircraft are enhanced considerably, and the boost in uncompressed audio (in Dolby True HD or DTS-HD, both 7.1) makes for a very aggressive, enveloping experience (except for scenes with the actors standing around and talking in each other's offices). All of the extras from the limited edition 2-disc DVD are carried over here, still in standard def of course, apart from the still/poster gallery and pressbook and the DVD-Rom bonus, so hang on to that version if you're a completest. The Blu-ray certainly beats it hands down in every other department, though, and even comes with D-Box motion enhancement that'll require a whole night's supply of Dramamine.

Once Blue Underground jumped on the UHD train and started cranking out reference-quality releases of some of its big catalog titles, it was just a matter of time before they got around to this one. That day came to pass in 2021 with a limited three-disc edition featuring a UHD, a remastered Blu-ray, and a soundtrack CD, with the big selling point here being a new 4K 16-it scan from the original 35mm camera negative complete with Dolby Vision HDR and -- perhaps best of all -- a Dolby Atmos mix that easily catapults this to the elite list of absolutely essential home theater releases. From the opening moments with that first rushing sound of plane jets, this is a sonic joy with loads of room-filling channel separation and fun overheard effects that really pull you into the movie like never before. The low end is nice and robust in particular, delivering an experience that somehow manages to even outclass the UHD of Top Gun. Yes, really! The 4K presentation is nothing to sneeze at either, retaining the natural grain and the limitations of the visual effects while delivering a gorgeous array of vivid colors (those reds really pop!). There's also quite a bit of additional image info on the left and bottom compared to the older release, which is a nice plus. Frame grabs in the body of this review are from the 20201 Blu-ray, with comparison ones below, but the UHD is absolutely the way to go if you're able. English DTS-HD 5.1 and 2.0 mixes are also offered along with 2.0 French with optional English SDH, French, and Spanish subtitles, plus the audio commentary, two featurettes, two trailers, a teaser, three TV spots, and eight(!) image galleries for posters, advertising materials, the Japanese souvenir program, lobby cards, stills, behind the scenes shots, home video releases, and miscellaneous odds and ends. The insert booklet features the entirety of "Zero Pilot's Journal," now liberated from being just a DVD-Rom extra. 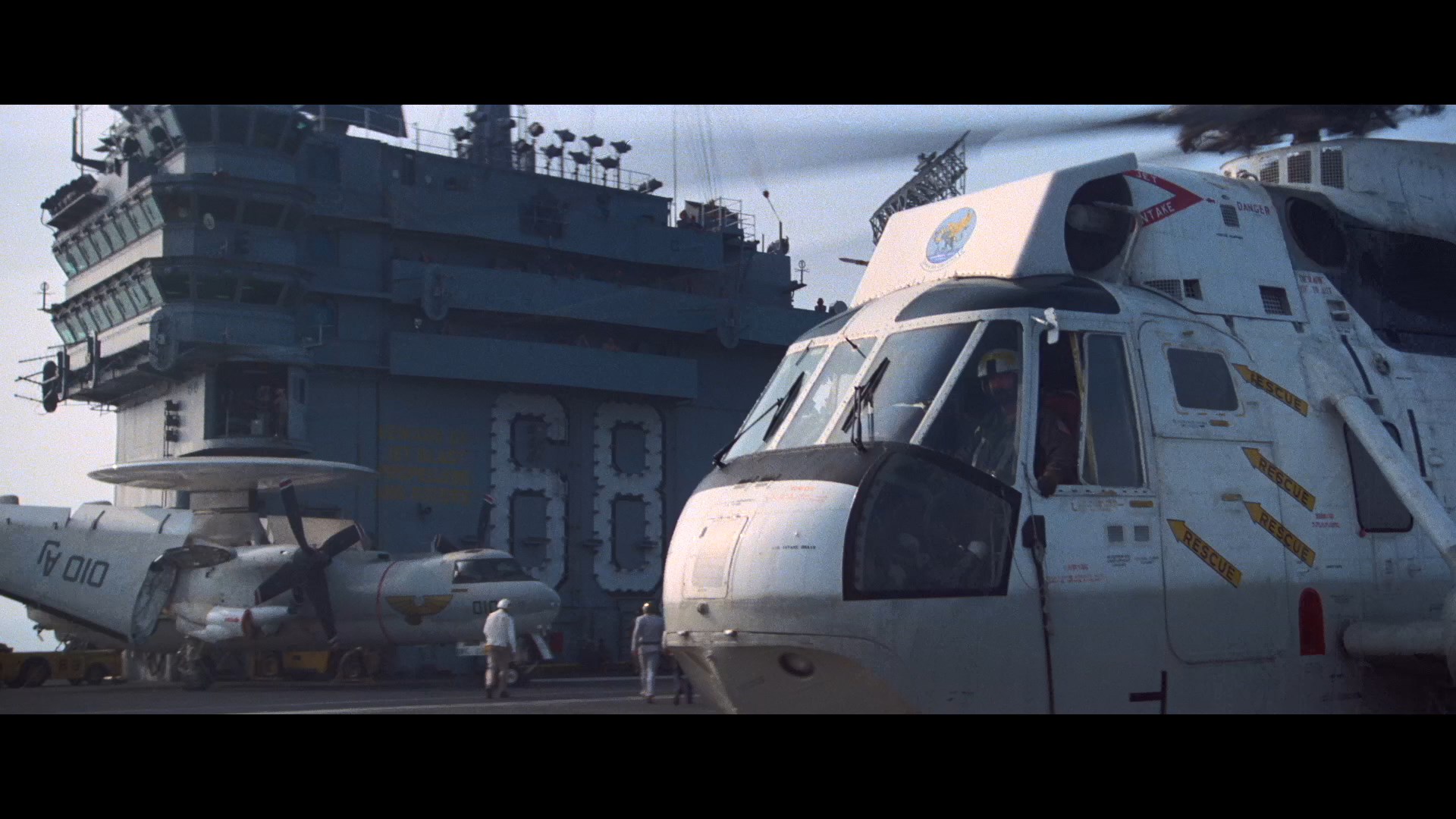 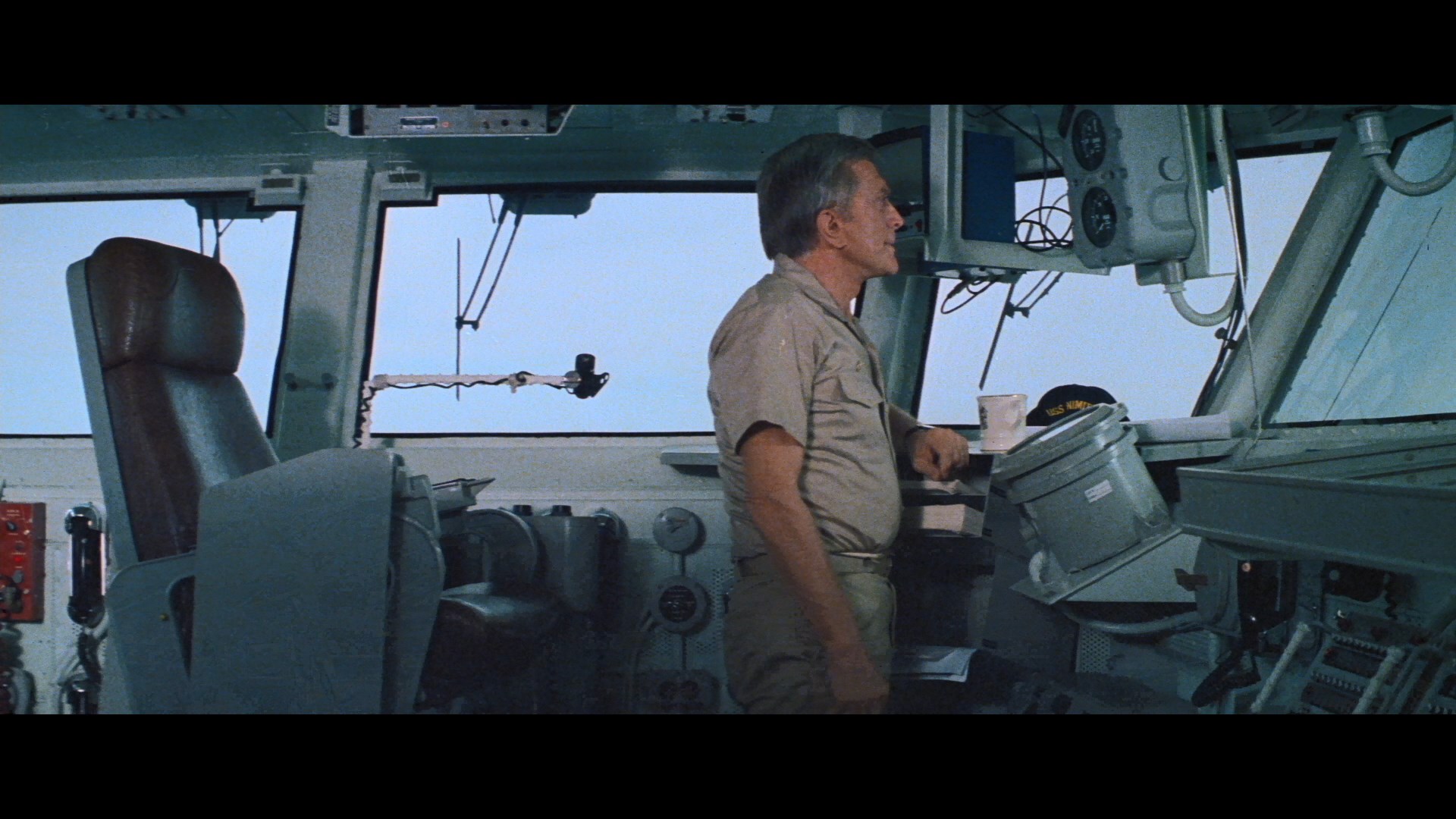 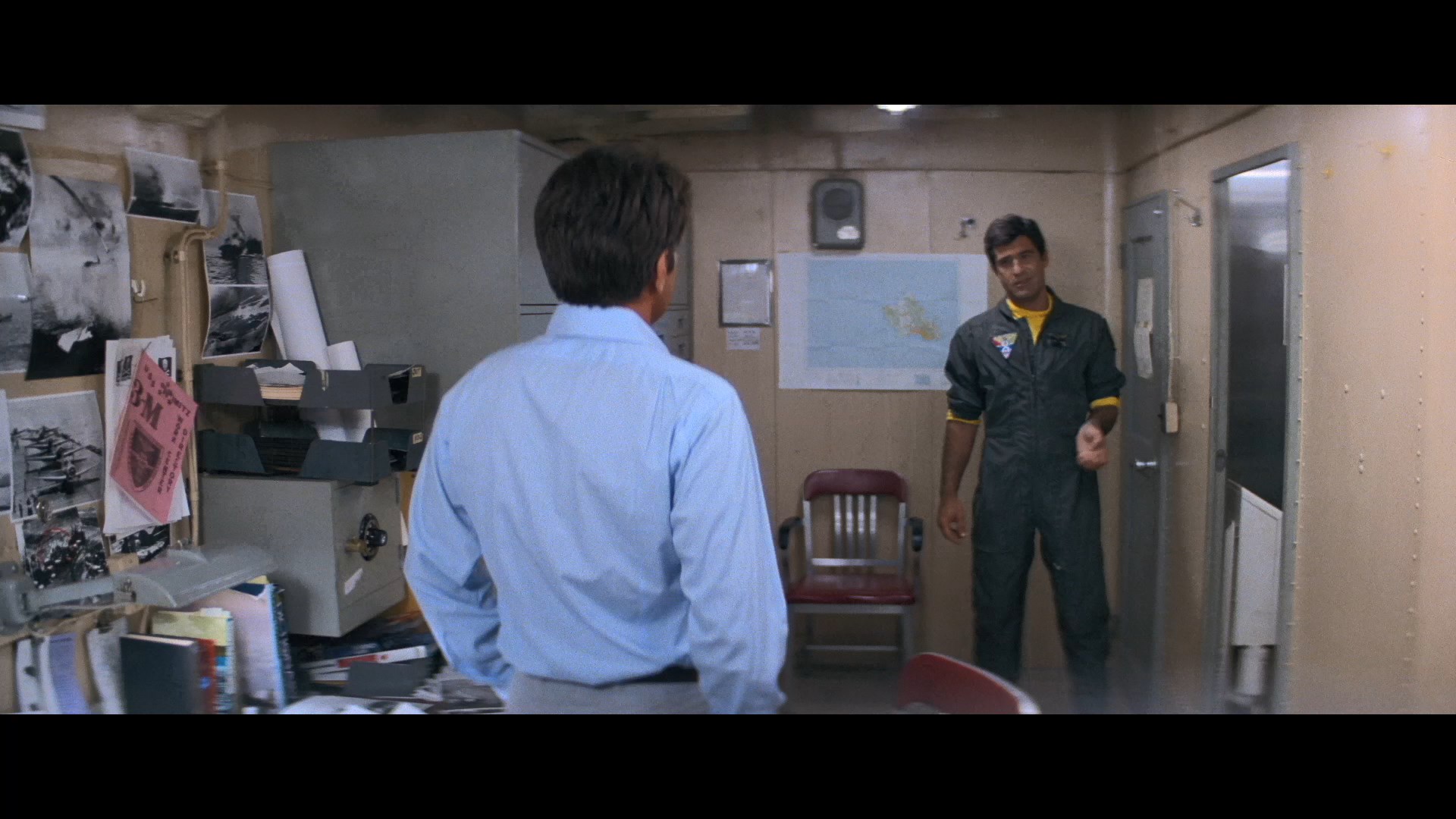 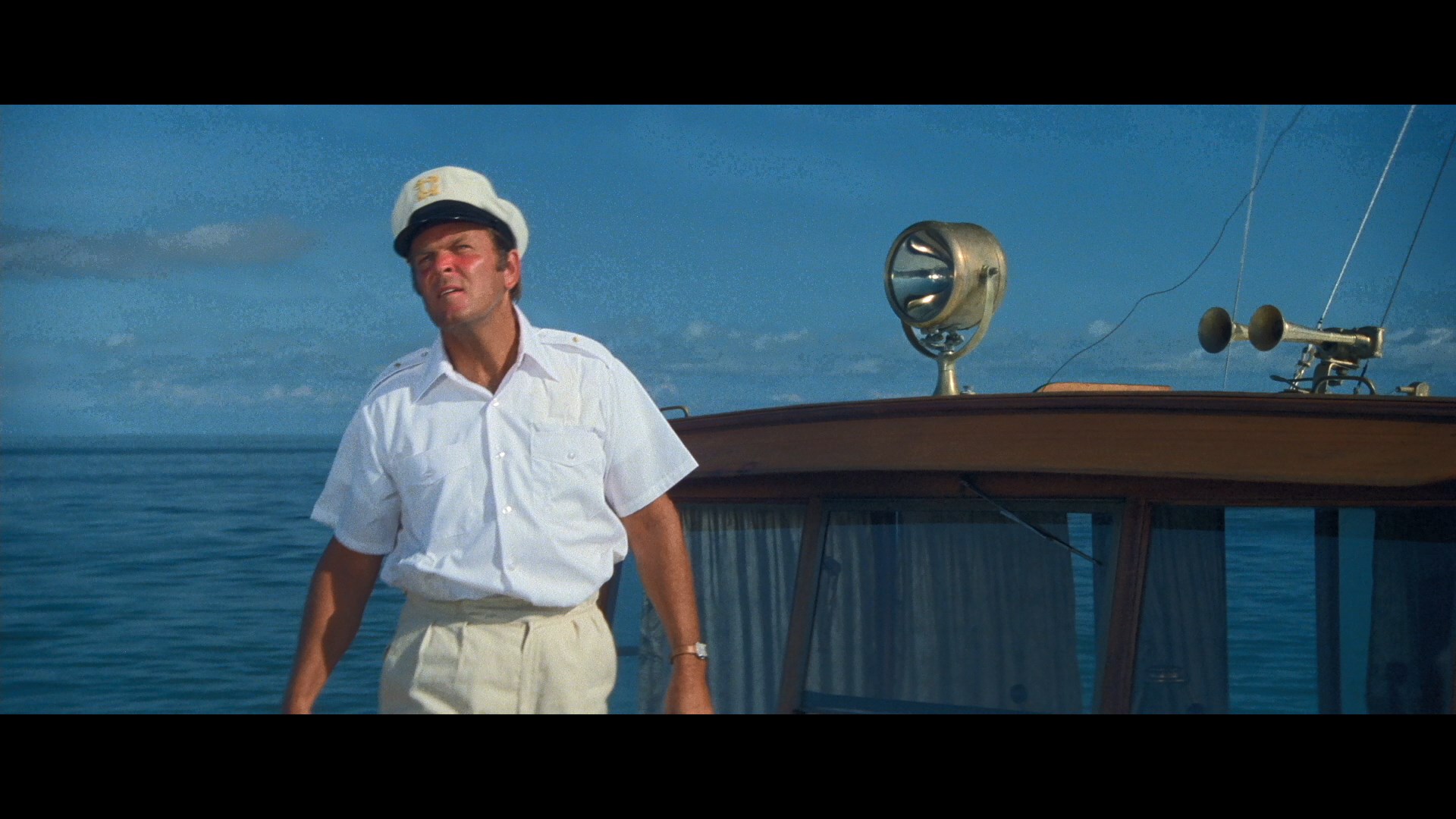 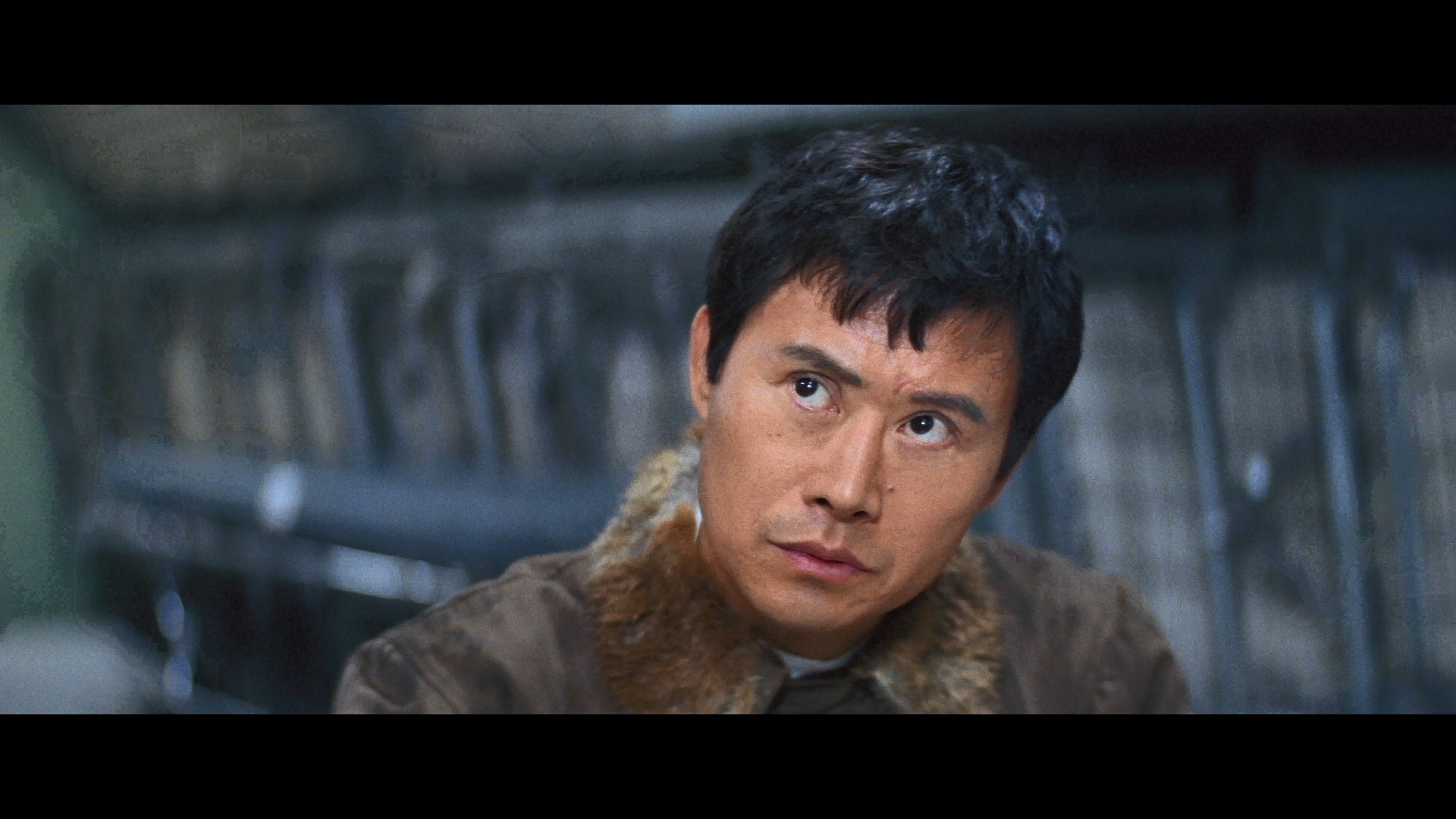 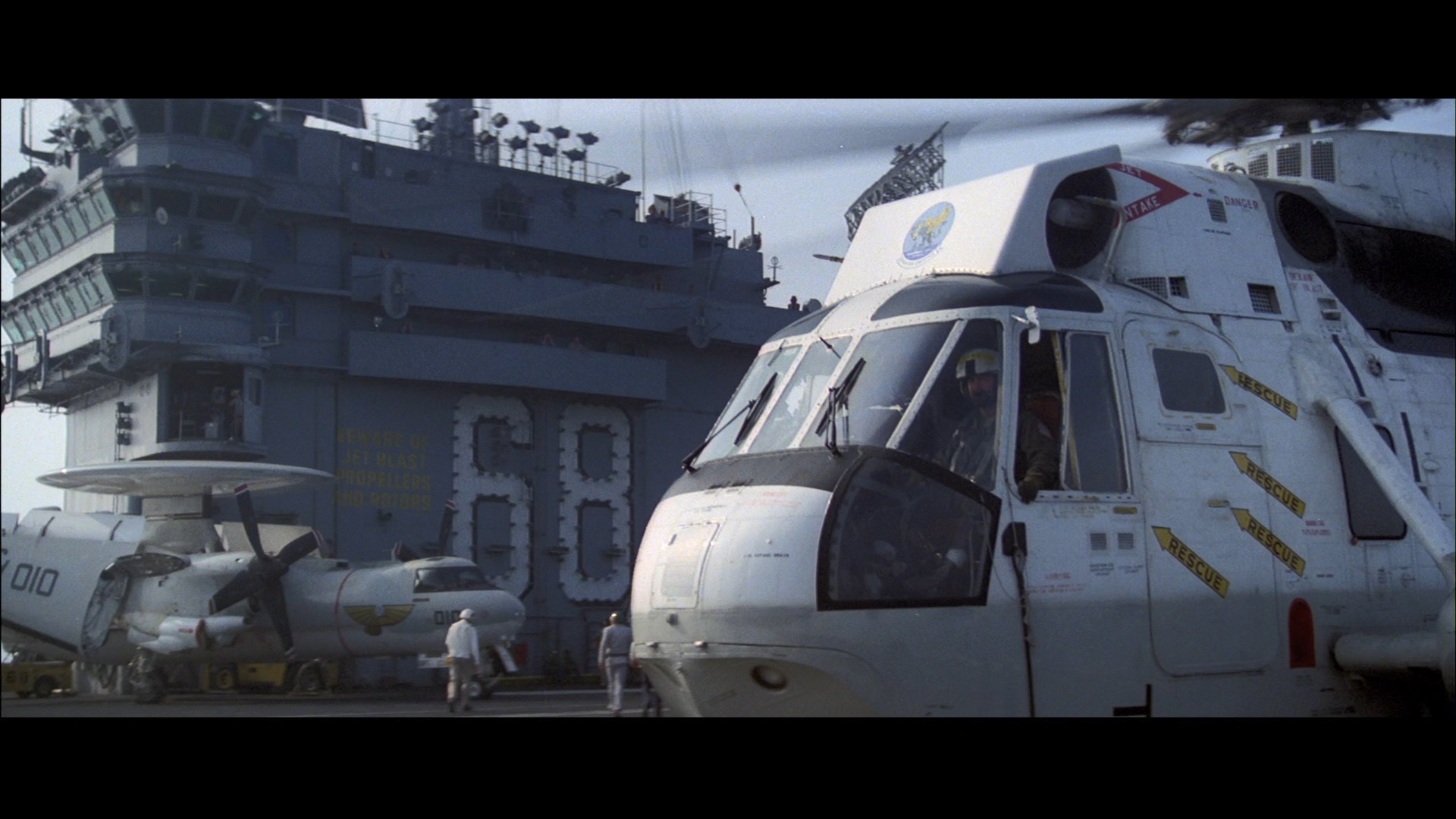 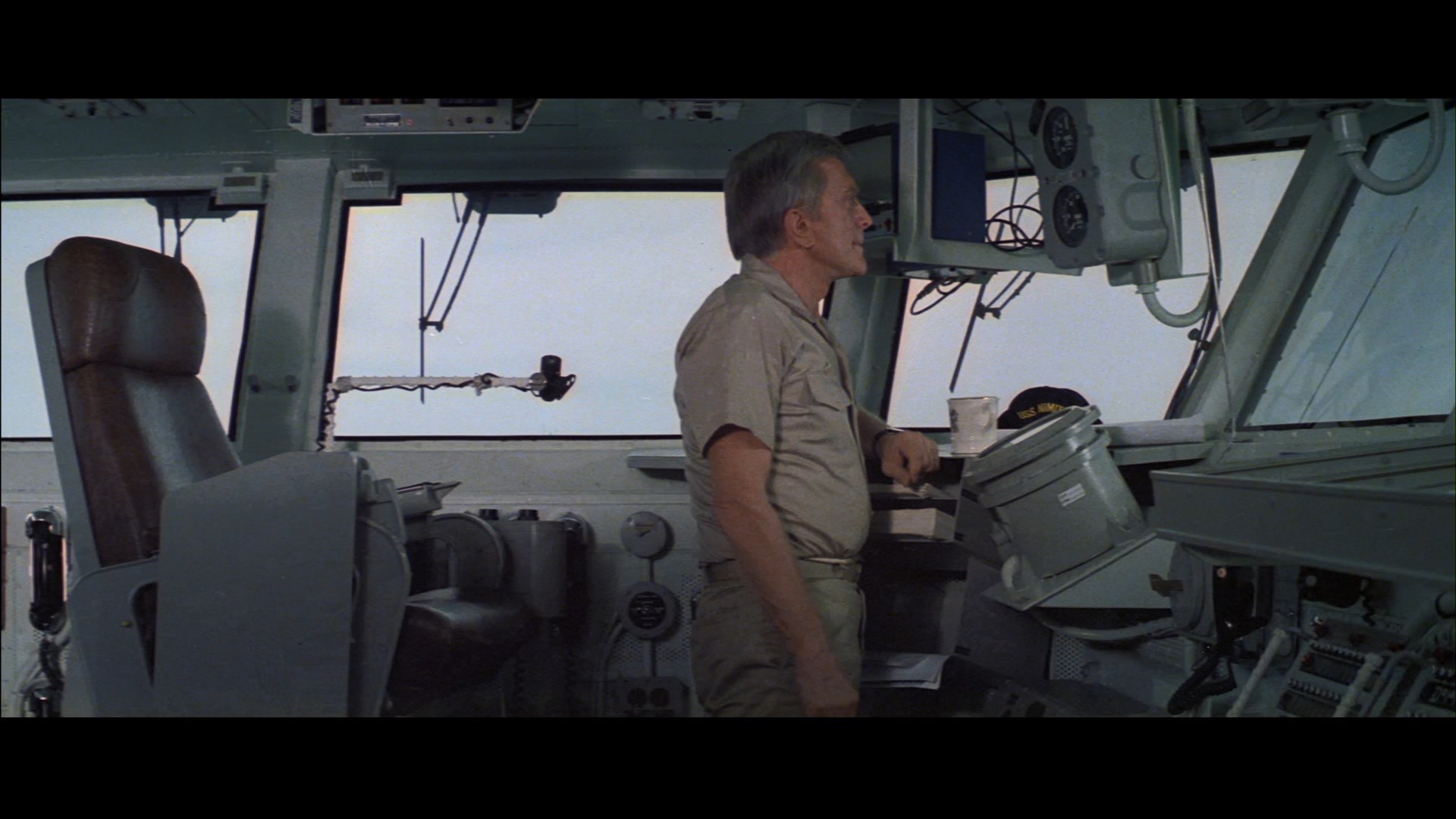 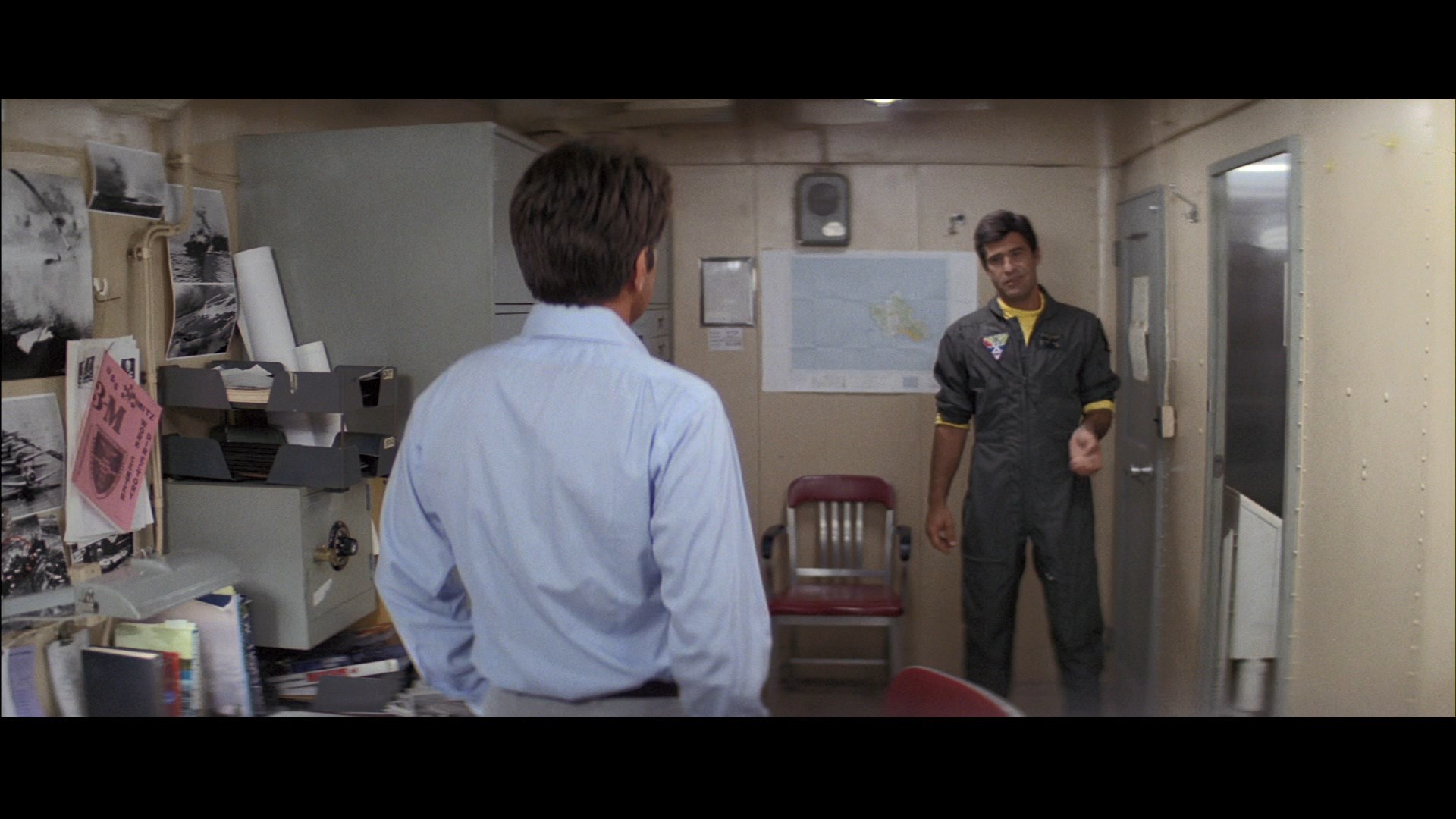 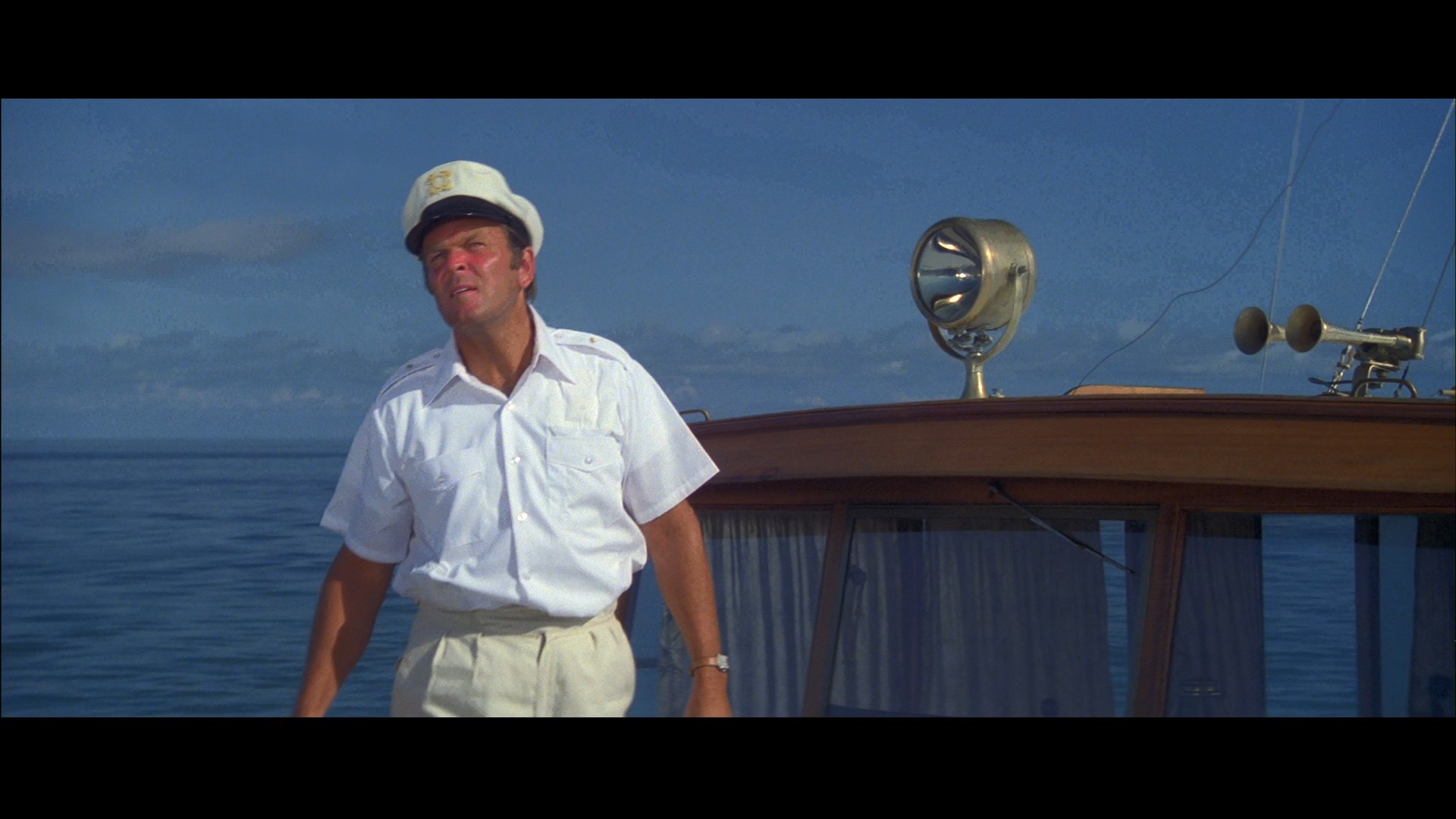 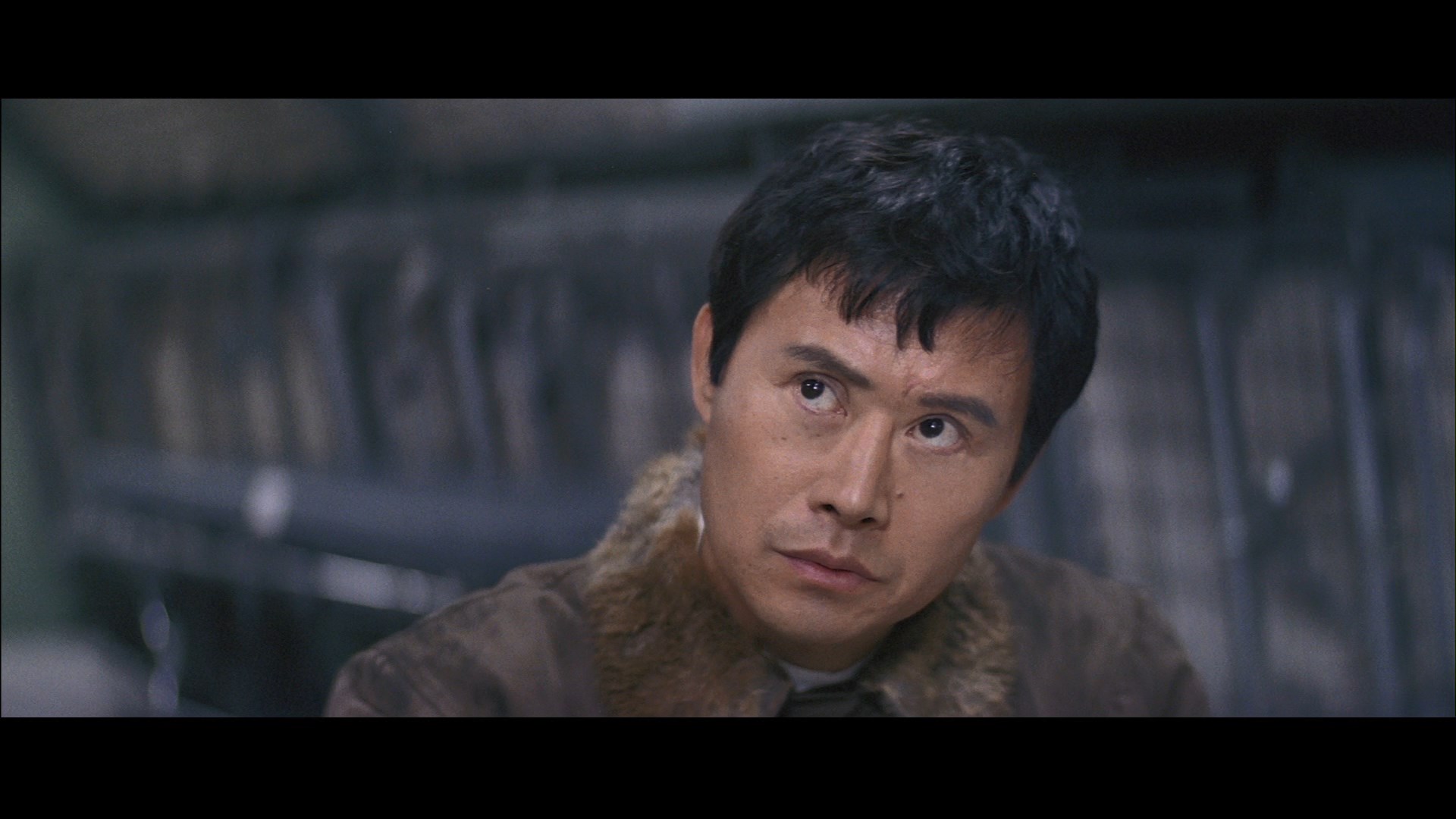