Anyone who attended film school during the 1970s or later will surely recognize Stan Brakhage as the creator of "Dog Star Man," a 75-minute avant garde masterpiece created between 1961 and 1964. An avalanche of cinematic technique using wild colors, endless superimpositions, and only traces of realistic footage (showing Brakhage and a dog trudging through the snowy wilderness, for example), this experimental epic influenced generations of artists and filmmakers while Brakhage himself remained on the fringes, turning out over 400 films of varying lengths before his death in 2003. 26 representative Brakhage films were chosen for this double-disc set, which offers an almost chronological tour through his pioneering techniques. As most of the films are silent, this may be tough going for avant garde newcomers; keep some CD accompaniment handy just in case. 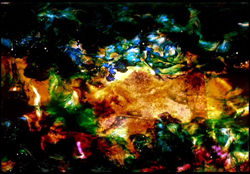 The first disc contains only four films, but they're among his most widely recognized and significant works. "Desistfilm" (1954) is an early study of light and shadow, buildings and the human form, which foreshadows in six minutes the visual obsessions he would explore over the next decade. The haunting and visually powerful "Wedlock House: An Intercourse" uses eerie black and white photography to depict a couple (played by Brakhage and his wife at the time, Jane) coming to terms with each other at an isolated house, staggered with negative footage of their rather explicit sex life. The aforementioned "Dog Star Man" comes next, accessible as either a complete film or divided into its original five segments ("Prelude," "Part 1," "Part 2," "Part 3," "Part 4"). Last is easily the most notorious Brakhage film of them all, 1971's "The Act of Seeing with One's Own Eyes" (a literal translation of the word "autopsy"), an unflinching and utterly clinical look at the autopsy process shot at a Pittsburgh morgue. Forget Faces of Death; this one will clear the room within seconds at your next dinner party, but it's also strangely gripping and beautiful if you're in a receptive frame of mind. Not surprisingly, Criterion has posted a prominent content warning before the start of the film.

The other 22 films are collected on the second disc and most have little to no traditional representational content. "Cat's Cradle" (1959) is a beautiful 6-minute light study using fabric, sunlight, 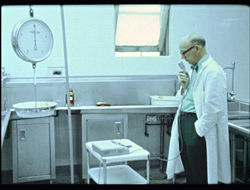