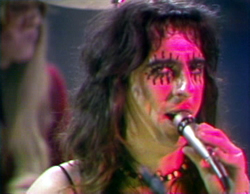 Wow! If you love early '70s counterculture pop art, this DVD is two and a half hours of pure paydirt. The name "Barry Richards" doesn't ring a bell with much of the public at large, but in the Washington, D.C., Baltimore, and Philly areas this former DJ was a local late night TV staple who kicked off the first free-form show devoted to progressive rock music. Mixing old serials, stoner discourse, and music acts mixing hip up and comers with legends of R&B, it's a fascinating hodge podge unlike anything you'd experience on American TV today.

A 21st century Barry introduces the disc, which whirls into a quick taste of his early TV appearances on the 1968 show Groove-In complete with a panel of teenagers interviewing Cliff Nobles, who also performs his catchy instrumental staple "The Horse" (complete with a soul sister shimmying in a gold dress onstage). A teen boy gives his mini-critique of 2001: A Space Odyssey, a groovy blonde chick named Cathy gives her fashion tips including a sailor-style dress suit, and local group The Flavor pretends to perform "Sally Had a Party" in a park next to a big rocket sculpture. 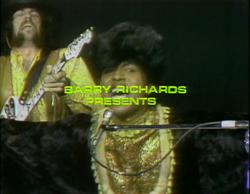 After that it's a headfirst plunge into two complete 1970 episodes of his show Turn-On. Up first is the pilot episode, of course, with Richie Havens performing "Handsome Johnny" (surrounded by a lot of smoke in a cardboard graveyard), Jamul howling "Tobacco Road" and doing an interview on a car with Little Richard and local comic Uncle Dirty, jazzy rock-folk act Zephyr performing "St. James Infirmary" in an alley set, and Little Richard (who also performs "Good Golly Miss Molly") and a very stoned-looking Jamul yapping on swings.

Things get really wild in the second complete episode, which kicks off with a very young Alice Cooper (complete with familiar eye make-up and really shiny silver pants) playing harmonica and launching into "Eighteen" and "Black Juju." He also talks to Barry a little about getting his start and being pals with Frank Zappa. The very shaggy-haired Humble Pie appears next to sing "Rollin' Stone" in front of a paint-splattered cloth, and then your brain will explode when Fats Domino and The Byrds team up onstage to perform "I'm in Love Again," "I'm Ready," "Blueberry Hill," and "Walkin' to New Orleans," with an additional rehearsal jam thrown in for good measure. This incredible set would be enough to justify the disc itself, and if you're a fan of either or both of these legends, it's a major treasure trove you won't believe even exists. 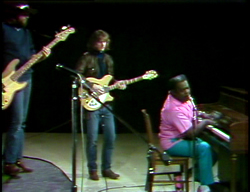 Next up a really young and skinny future Top 40 staple turns up heading Bob Seger System for a surprisingly rough and heavy triple header of "Lucifer," "Song for Rufus," and "Ramblin' Gamblin' Man," shot with more stylized lighting than anything else on the disc. Then it's back to smoother territory with Biff Rose for a piano-tinkling batch of folkier songs like "Myrtle's Pies," "Jesus and Mary Magdalene," and "Nothing to Gain." That's hardly it for the DVD, though, as you also get a slew of lost B&W performances from Turn-On including four songs by The Illusion ("When I Metcha Babe," "Did You See Her Eyes," "Man," and "Let's Make Each Other Happy") and a pair of songs from Crow ("Cottage Cheese" and "Don't Lay No Boogie Woogie on the King of Rock 'n' Roll"). At the end is a special sneak preview of Barry's '73 program, Barry Richards Rock Show, with Rory Gallagher doing "Walk on Hot Coals" and Muddy Waters performing "Baby Please Don't Go" and "Got My Mojo Workin'" (with a quick Q&A in between). Picture quality on all of these is about as good as you could possibly expect given the zero budget, public access-style production values; that said, it's all well preserved and colorful, and the audio sounds just fine for a TV show of this vintage.

In the special features department, another chunk of bonus video features Vegas performer Iron Jaw Samson doing something really grotesque with a can of Pepsi, a cigarette, and a lightbulb, complete with repeated vocal disclaimers from Richards. A great still gallery features numerous acts who have appeared with Barry over the years ranging from Linda Ronstadt to Bo Diddley, and a collection of audio interviews features Barry talking to Buster Crabbe, Little Richard, James Whitmore, Alice Cooper, and celebrity offspring actors Chris Mitchum and Patrick Wayne (promoting Big Jake). Oh, and if that's not enough, a bonus CD packs in a ton of additional interviews and performances including a two-part '64 Barry interview with The Beatles, more Little Richard, Barry raps, Dr. John doing an interview and performing "Gris Gris" and "Wash Mama Wash," Emitt Rhodes doing "Live Till You Die" and "She's Such a Beauty," and three more Alice Cooper goodies, plus a booklet packed with photos and ad art plus liner notes by Joe Hasselvander and Eli Brown and a note from Barry himself. Volume 2 can't possible come soon enough.