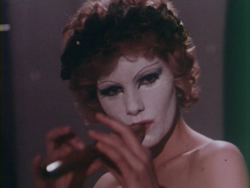 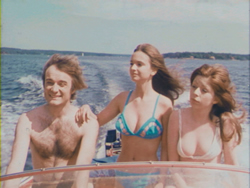 In 1972, Sarno directed a film that would turn out to be one of the highlights of his entire body of work, Young Playthings, a strikingly surreal adult fairy tale that garnered a new wave of interest when it became the centerpiece of a lengthy section on Sarno in the influential '80s book, Re:Search #10: Incredibly Strange Films. Unfortunately the surge in fan interest also exposed the fact that film elements no longer seemed to exist, with all circulating prints long gone and only a very smudgy, low-grade bootleg telecine transfer floating around on VHS among die-hard collectors. The fact that the film was also a starring vehicle for stunning Swedish actress Christina Lindberg (Thriller: A Cruel Picture) just added to the frustration, but thankfully the film finally received its first official video release in Sweden in 2015 courtesy of Klubb Super 8. There will never be an ideal presentation thanks to the condition of the elements, but what they've salvaged is a major improvement. On top of that it's also an unofficial double feature two-disc set and was released with another Sarno double bill showcasing two lesser-known sides of his filmography.

To get to the big issue first, the edition of Young Playthings presented here is explained with an opening text card. A super-16 work print was found in the late Sarno's basement in Stockholm, and that's the majority of the source here. Colors and clarity are much better here than the only viewable copy we've had in the past, though sound was not available and had to be pulled from that same old transfer. On top of that the credits and 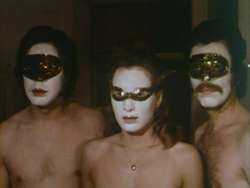 one reel or so (starting around the 9-minute mark and running over 25 minutes) have been lost, so those are spliced in from that same murky VHS. (To get an idea of that section's dire quality, click here.) The new transfer has quite a bit of damage on and off throughout, but it's a minor annoyance considering the extreme rarity now of the film itself. In short, Sarno fans and anyone interested in international exploitation filmmaking should find this more than satisfying.

As for the film itself, it's a 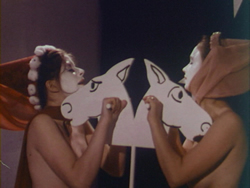 Easily one of Sarno's best films, this is a title whose fate remains a tragedy for devotees of oddball cinema. Thanks to distributor insistence, it was shot in English (a frequent practice with his Swedish films) and for once the cast's discomfort with the language doesn't become a major issue. The dreamlike atmosphere is nicely woven into the story as it gradually overtakes the film, moving from the mundane to the purely outlandish by the it reaches its ambiguous, eerie finale. As usual for Sarno at the time, it isn't overly explicit but filled with artistic, casual nudity from virtually the entire cast; however, the use of make up and strange props gives it an air far removed from your usual softcore outing. 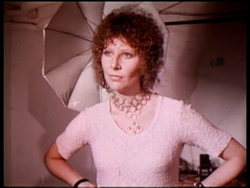 The DVD from Klubb Super 8 is presented open matte (as with most of the other three titles here) and boasts a wealth of extras including bonus trailers for Anita, Bamse, Sweden Heaven and Hell, Maid in Sweden, Exposed, and Baksmalla (Hangover). There's also an image gallery ( featuring a smattering of poster art, promotional stills, and photos of the surviving film containers five sections of outtakes) and a 1997 interview with Sarno, running 7 minutes, in which he talks about working in Sweden and a bit about his New York career with a particular focus on Inga and Young Playthings. However, the big addition here is nearly an hour of raw footage from the production consisting of outtakes, alternate takes, and other random footage, divided into five sections. It's pretty amazing to see as it features a wealth of unused playland footage, lots of extra coverage of Lindberg, and some fleeting but surprising frontal shots definitely not in the finished film. 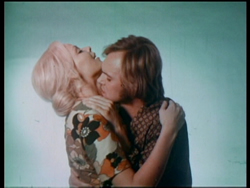 Also included on a second DVD is a second Sarno Swedish softcore outing, the far more traditional Siv, Anne & Sven (also available in its U.S. export version from Something Weird as Love in the Third Position). It's basically a return to Sarno's All the Sins of Sodom territory as we open with a quartet of characters walking in the woods on the way to a photo assignment. Upon arrival we learn their positions of power, which will shift back and forth over the course of the film. Siv (Malmquist) is an icy, controlling, blonde photographer doing a nude art shoot with Sven (Carlsson) and newbie Ann (Engstroem). After they finish, Siv seduces Sven while Ann hides out nearby and becomes aroused in the process. Ann's harboring a crush on Sven and doesn't impress Siv's brittle best friend, frizzy-haired Lisa (Roennklint), whose sapphic inclinations are confirmed when they go to a nearby nightclub (that looks more like a sauna) where pop-folk performances segue into a lesbian free for all. Soon a love triangle blossoms with Ann torn between Sven and Siv, and emotions soon lead to a bittersweet solution. 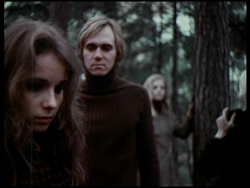 A decent example of Sarno's early '70s period, this one features the usual excellent photography (that Bergman feel is definitely in evidence here) and his knack for generating steamy love scenes without actually showing as much as you think. Unfortunately he's also saddled with some pretty terrible acting since none of the actors (apart from the compelling and beautiful Engstroem) appear to speak English at all. They appear to be reciting their lines phonetically without understanding what they're actually saying, which results in a number of garbled lines that make no sense at all. Get over that obstacle though and you have a pretty solid piece of erotic drama from one of the subgenre's maestros. The print here is a step up from the SW version but is still in iffy condition, missing some frames here and there and a snippet of the opening credits. There's also a nasty bit of master tape damage at the 56-minute mark that's quite distracting, too. The mono English track sounds fine for what it is (with optional Swedish subs like all the other films here), and the oddly catchy theme song, "Is There a Place?" (performed by "Goran & Janine"), is always welcome. The sole extra here is a 2-minute image gallery including plenty of behind-the-scenes photos. 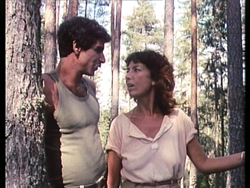 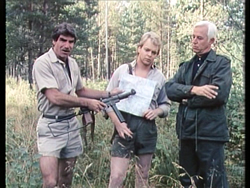 rather stern-looking female operative, Marie (the boss's wife), who of course winds up in bed with Harry. People go skinny dipping, chintzy synthesizer score drones on the soundtrack, several women try to sleep with Harry, allegiances shift, and everything climaxes in a gesture of unexpected pacifism.

Sarno wisely doesn't stress the action here too much after a frenzied opening showing the terrorists blasting away at random targets around the city, executed with a maximum number of highly unconvincing squib effects. The focus here is more on an ideological clash with the infiltrating team coping with a mindset different from its own, and once again, many of the actors clearly have a minimal grasp on the English language. The end result is a far cry from Sarno's best work, but it's so unique and oddly sincere it could easily win over some fans in the right mood. The open matte transfer looks okay, taken from a dated master but again finally presenting this rare curio for an appreciative audience.

Tucked away among the bonus features here is an entire second film, Helgerån, which was shot with a far more capable English-speaking cast and also goes under the name Sacrilege. It's one of the rarest of all Sarno films ever released on VHS with only a sole, scarce European edition fleetingly adorning shelves before vanishing entirely. Incidentally, the DVD packaging features a content disclaimer that this contains "Christian cult members, sexual tensions, severed heads," which should give you an idea of what to expect. 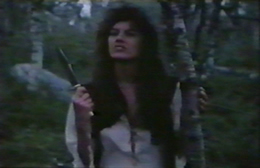 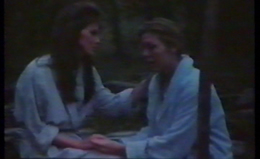 in tone to the Italian titles being cranked out around the same time by Joe D'Amato's Filmirage, complete with lots of irrational plotting and ooga booga oddness. The plot revolves around Sister Sara (Prime Evil's Moore), a devout Georgia native who's living in a strict Christian sect and enjoying a romance with cop George (Sinclair). She hasn't seen her twin sister, Gudrun, in quite a while since she's, well, apparently possessed by the devil. Sara senses her sister needs her right away, so it's off to Lapland country where she becomes involving an ongoing saga involving copulation with the devil, the conception of the Antichrist, perky religious zealots with a penchant for hiking, nocturnal trysts in the woods, repressed lesbianism, and brutal scythe murders.

Boasting a rather effective, propulsive electronic score and a handful of fun gore gags, this one overstays its welcome a bit at almost two hours but definitely deserves better than its current obscurity. Besides, how often can you say you've seen a Joe Sarno slasher film? As usual there's a somewhat melancholy, contemplative tone to the proceedings, which makes it all the more jolting when someone abruptly has their cranium diced off with a scythe, and the semi-downbeat finale is definitely a far cry from the usual last-second jolts you'd expect from the period. Unfortunately the film may only exist now as what we have here, a conversion of one of those super-rare VHS tapes with all the issues that implies. Dropouts and noise are frequent issues and the dupey image quality never looks good at all, but at least we can finally see the thing. This is also the only widescreen film in the set, presented at non-anamorphic 1.85:1. Also included on the disc are an image gallery, a 3-minute featurette (in Swedish only) with Löfgren talking about Reems (accompanied by tons of production photos), and a smaller selection of the same promotional trailers as the other DVD.