After ribbing the slasher genre with The Christmas Season Massacre, Wicked Pixel member Jeremy Wallace and crew decide to get serious with The Undertow, a low budget and quite accomplished little backwoods shocker in the vein of those '70s wilderness horror films like The Hills Have Eyes and Rituals (or if you prefer the keep your terror cinema history recent, the less effective Wrong Turn or Cabin Fever). 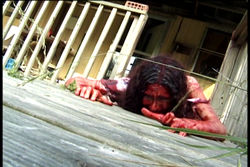 The set up is fairly standard, as six teens armed with beer and smokes head to the tranquil woods near Old Mines for a little boating and fun. Unfortunately the denizens are less than thrilled with the trespassers, who are soon being picked off by the Boy (Doc Brown), a huge, lumbering masked lunatic with a penchant for poking out people's eyes, slam-dunking heads against big nails, and smushing skulls. As the body count rises, the survivors try to get back by foot and canoe to town and discover exactly why the locals are so hostile. What they discover isn't very pretty.

Adding another notch to its roster of superior homegrown horror product, The Undertow deserves a solid place with their other 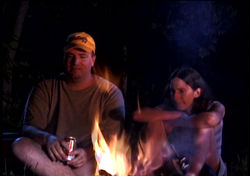 word-of-mouth favorites like Ice from the Sun and Scrapbook (both helmed by Eric Stanze, who handled cinematography and editing duties here). The usual suspects also populate the cast, including the great and oft-abused Emily Haack (who also cut the film's amazing trailer) and the ubiquitous Jason Christ. Julie Farrar, a veteran from Wallace's previous outing, returns here with the main scream queen chores and does a fine job, acting and yelping her heart out even when covered head to toe in blood. Speaking of the red stuff, there's more than enough on display after a relatively restrained (but moody) opening act; the FX guys never hold back and deliver some solid, Fulci-style facial mayhem in nearly every kill. Nice to see some folks still aren't afraid of actually delivering some gore now and then. The actors and dialogue are also generally up to par, with some effective interplay during the quieter scenes despite the limited time for character development. Best of all, the film actually builds to a gripping and truly 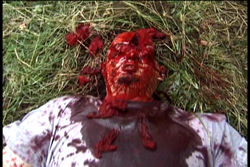 unnerving climax, filled with mayhem, dismemberment, and flat-out fear in a way you don't find in Hollywood films anymore.

As usual, Sub Rosa doesn't skimp on the extras. Wicked Pixel turns out yet another excellent featurette, led this time with 22-plus minutes of behind-the-scenes footage with a special focus on the gore and pursuit scenes, of course. An outtake reel features some amusing goofs and gaffes from the actors, while a deleted scenes reel features some innocuous footage removed from the final assembly. Also included are two Undertow trailers as well as promos for The Christmas Season Massacre, I Spit on Your Corpse - I Piss on Your Grave, Insaniac, Scrapbook, Ice from the Sun, Savage Harvest, and the upcoming China White Serpentine, which looks about as hallucinatory as you can get. There's also a Sub Rosa-oriented Easter egg; too bad we didn't get a commentary this time around (the project had a fairly complicated origin and no doubt inspired a few good stories), but what's here should be more than enough to satisfy the most bloodthirsty appetites.

To paraphrase an oft-quoted line from This Is Spinal Tap, there's a thin line between clever and stupid. Of course, the line is even thinner when you're trying to be stupid, which is precisely the aim of this whacked-out spoof of '80s slasher films. No, no, this isn't like Scream; no postmodern winking here or hot teen stars flouncing around. Instead we've got oceans of ridiculous gore, utterly gratuitous nudity, Christmas slasher antics clearly shot during the height of summer, strip Trivial Pursuit, and an over the top gag ending. If you aren't already brain damaged going into this one, you very well might be on the way out. 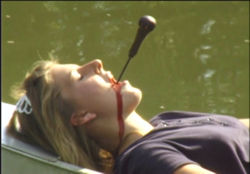 In the hilarious opening monologue, a randy bad boy named Boom Boom (Scrapbook director Eric Stanze) comforts his jittery date in a car by relating the tragic tale of Tommy "One Shoe" McGroo, a little victimized boy who turned into a maniac after receiving an eyepatch for Christmas (don't ask). Still trudging around with only one shoe and the pirate accessory over his eye, Tommy stalks the woods and, of course, quickly makes gory work of this necking couple. Since Tommy's intent on striking down more of his classmates every Christmas, the last batch of survivors holes up in a house near his stomping grounds (of course), essentially making themselves easy targets. In the meantime they indulge in loads of thickheaded debauchery, all the while acting out the typical '80s body count stereotypes. Will anyone survive? Will anyone get laid? And most importantly, will Tommy ever get his shoe back? 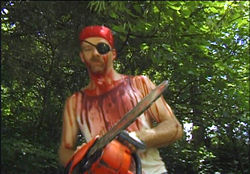 The biggest problem with The Christmas Season Massacre is that the opening fifteen minutes are so jawdropping in their goofiness that the ensuing antics can't help but look milder in comparison: Tommy's curtain-raiser (flinging innards at the camera), the aforementioned monologue, and a couple using a watermelon piñata as a sexual accessory underneath a Christmas tree. Though extremely prolonged and lingering, none of the murders can be taken seriously except for one mean-spirited bit involving a woman tied to a tree, which really belongs in a different movie. The usual band of Sub Rosians are on hand, including Jason Christ as the requisite nerd (named Dorcas, har har), main bully Ernie (DJ Vivona), and the busty Abbey (Joy Payne), among others. Most of the dialogue is deliberately bad and hokey, with one ad-libbed guitar serenade earning a few genuine chuckles as well. (Check out the alternate versions in the extras section for kicks, too.) 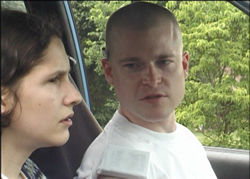 As usual Sub Rosa ladles on the gory goodies with their DVD, which features video and surround sound quality comparable to their other shot-on-video releases. The rock songs are actually well used, including a memorable closing ditty accompanied by loopy outtakes. Two commentary tracks are included, both rather brief (due to the short running time of the feature itself, naturally). Director Jeremy Wallace takes the honors first and proves to be as genial and jokey as you might expect, while the mic for track two goes to actors Jason Christ, Chris Belt, and Julie Farrar, all of whom recount the standard obstacles of zero budget filmmaking. Also included are seven minutes of behind the scenes footage and trailers for this movie, Insaniac, The Undertow, I Spit on Your Corpse - I Piss on Your Grave, and hidden away, Scrapbook, Ice from the Sun and Savage Harvest. Also hidden in the extras are two Stanze music videos, "I Lost My Innocence to the Industrial Age" and "Put Your Feet in the Wedding Cake" by Hotel Faux Pas. However, the award for the strangest extra goes to the short film presentation, Chris Grega's "Frank Wang: The Vengeance." Running over half an hour, this goofball B&W nod to martial arts should satisfy anyone in the mood for stickfights and bowling ninjas after watching an hour of slasher gore. Chow down!