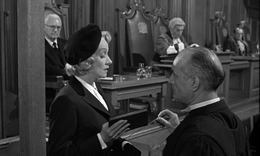 Though she's best known for her long-running series of whodunits featuring sleuths Hercule Poirot and Miss Marple, Agatha Christie has had a greater 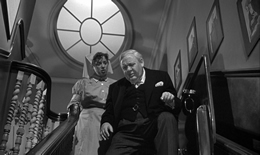 impact on film through works featuring neither of her most famous characters. The most obvious legacy she left was Ten Little Indians (also published as And Then There Were None and a certain other unprintable title), which laid out the template for the modern body count movie and has been adapted and imitated many, many times. However, running a close second is Witness for the Prosecution, which began as a short story adapted into a successful play in 1953. Courtroom thrillers had been popular dating back to the '30s with Perry Mason, but this tricky little number offered a whole new twist on the idea with a killer twist in the narrative and a faultless structure that still keeps audiences riveted for the entire running time.

Director Billy Wilder was firmly in safe mode in the mid-'50s when he made this film, coming off such other titles as Sabrina, a watered-down adaptation of The Seven Year Itch, Love in the Afternoon, and The Spirit of St. Louis. The cynical edge found in his early '50s films seemed to have been honed down, but here he found a way to hone it again with the story of Leonard Vole (former matinee idol Tyrone Power, who would make only one more film), a married man accused of murdering the elderly female benefactress (Varden) who left him everything in her will. His case is taken by Sir Wilfrid (Laughton), a booze-sipping barrister whose health issues have just saddled him with a combative nurse, Miss Plimsoll (Lanchester, Laughton's real-life wife). Sir Wilfred's defense is thrown off course when Leonard's German wife, Christine (Dietrich), appears as a witness for the other side to implicate her husband in the crime. Suspicious letters, conflicting testimony, and a mysterious cockney woman soon become elements 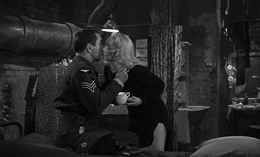 in a puzzle that ultimately resolves after the reading of the verdict.

While the mechanics of Christie's plot have been left fully intact, Wilder's film boosts the entertainment factor by introducing the character of Miss Plimsoll (whose banter and booze-sneaking games with Sir Wilfred are terrific fun) and an early flashback sequence showing how Leonard met Christine, all the better to offer viewers a flash of Dietrich's legendary legs (also featuring prominently on the poster art). It would be criminal to give away any of the surprises in the second act, but let's just say that the trickiest bit is 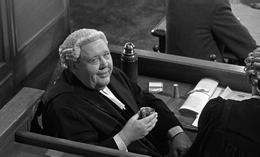 handled quite well by 1957 standards and still fares better than some later attempts at a similar switcheroo. Of course, this film also set the stage for Wilder's astonishing run of mid-career classics with Some Like It Hot and The Apartment coming next in line.

Since it was shot in Europe and originally framed at an aspect ratio of 1.66:1 (narrower than the common 1.85:1 of Wilder's '50s American films), Witness has always fared pretty well on television with only minimal cropping. However, the first DVD from MGM was a disappointment due to their baffling policy of never using allowing 16:9 enhancement for 1.66:1 films, which also afflicted their early discs of Some Like It Hot. A remastered HD version of Witness began popping up on the MGM HD channel with some regularity, but that turned out to be a bit softened and noise reduced next to the sterling 2014 Blu-ray presentation from Kino Lorber as part of its Studio Classics line (with a greatly-improved separate DVD release to boot). The transfer looks immaculate apart from some unavoidable image degradation during a handful of shots involving optical dissolves, particularly the opening credits and the transitions in and out of Leonard's flashbacks. One debit: the absence of optional English SDH subtitles, which were on the previous DVD and were enjoyed by many hard-of-hearing movie fans. The hugely enjoyable theatrical trailer (with some ballyhoo from Laughton himself) is also included, along with a six-minute interview between Wilder and filmmaker Volker Schlöndorff. Given the context it's not surprising they mention Dietrich a lot, though Wilder's evaluation of Christie's literary value is bound to be questioned by her fans (as well as anyone familiar with her less famous, more experimental works). It's a great little lively discussion (with Raymond Chandler getting a mention, too) with one of the greats and a nice accessorty to a film guaranteed to please just about anyone, not to mention one of the finest Hollywood mysteries ever made.