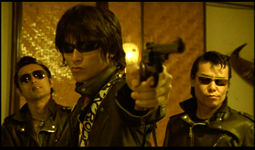 who goes out for some fun by attending a rowdy concert performed by Guitar Wolf (which happens to be both the name of the band and the lead guitarist; appropriately enough, the other members are Drum Wolf and Bass Wolf). When a nasty squabble erupts between the band and the club's crooked manager, Ace intervenes and receives a mystical Guitar Wolf whistle for his efforts. A stop at a gas station brings a new love into Ace's life, along with a horde of shuffling, blue-faced zombies who can only be killed with a gunshot to the head. The aforementioned club owner and a gang of robbers complicate the situation to the point where Ace has no choice but to blow the whistle, leading to a frenzied showdown between flesh-eaters and the leather-clad forces of rock.

Even sillier than that 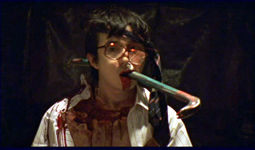 synopsis might lead you to believe, Wild Zero never even tries to make sense. From video-generated lightning effects to magical, zombie-killing guitar picks, the film whirls from one madcap idea to another; if you start to worry that all of this might not be holding together, well, don't worry; all the loud music and flashy lighting will keep you distracted. The gore is fairly strong (including the requisite gut-munching) but appropriately cartoonish, and as for the acting... well, one hopes it's this bad on purpose. As far as the "new" Japanese horror wave goes, it's rougher around the edges and more overtly goofy than Versus, which is a good or bad thing depending on your taste. Basically this is the sort of film where lots of friends can come by, sit around and talk, and still have no problem getting into the film whenever something insane happens.

In keeping with that philosophy, Synapse has treated Wild Zero's DVD special edition to an innovative, sure-to-be-practiced drinking game, which essentially means that, should you choose, a beer mug pops up on the screen 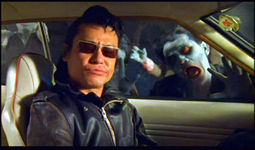 during certain triggers in the film (try it to find out what they are). Not surprisingly, all but the hardiest of constitutions will be on the floor within the first half hour. As for the film itself, the transfer looks fine considering this was a very, very low budget production, shot on 35mm but with post-production effects (lightning, credits, etc.) created afterwards on video (thus, no anamorphic transfer either). The stereo mix is very aggressive and effective, both during musical and flesh-eating interludes. Extras include a funny behind-the-scenes music video (with some bizarre cutaways), a Guitar Wolf bio, a still gallery, a dupey-looking trailer, and some very, very amusing animated menus. Easter egg hunters will also discover a substantial, hysterical surprise hidden on the bonus features page. Try watching this extra goodie after doing the drinking game; you... will... not... survive.