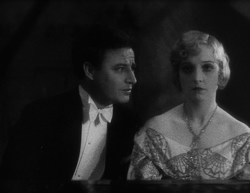 The early days of sound films in the 1930s were dominated on the horror front by Universal, who spooked millions of viewers with Dracula and Frankenstein and their monstrous offshoots. Other studios (mainly MGM and Paramount) dabbled in the uncanny, too, offering polished chillers that eventually became contributors to the rigorous enforcement of the P 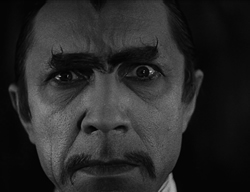 roduction Code. Much further below the radar were "poverty row horrors," ultra-cheap quickies made by independent producers and small studios with imagination compensating for a lack of money. Most of these don't come close to classic status, but a handful truly transcended their limitations to become genuine, major works of cinematic horror, and proudly at the top of that heap is White Zombie, the poverty row Citizen Kane of horror films.

While visiting Haiti, engaged couple Madeleine (Bellamy) and Neil (Harron) are startled on a nocturnal carriage ride by the presence of shuffling workers who seem oblivious to their surroundings. Their local host (Cawthorn) greets them warmly but, it seems, is secretly infatuated with Madeleine and wants her for himself. He seeks the aid of sinister mill owner Murder Legendre (played by Lugosi of course), actually a voodoo master who uses the undead as slaves in his mill. (Yep, this is the screen's first bona fide zombie movie.) Thanks to a few handy spells, Legendre induces Madeleine into a state resembling death, then steals her "corpse" for his own private enjoyment; the viewer is left to fill in the blanks, but this seems to consist mostly of letting her roam around Murder's castle and play Liszt on the piano all day long. Of course, Neil is none too amused and decides to infiltrate Murder's imposing fortress, leading to a rousing and poetic finale. 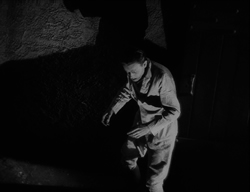 team of brothers Victor and Edward Halperin never really hit paydirt like this again; even their sequel, Revolt of the Zombies, lacks the inventive spark which has made this a classic. While most of the performances are generally cardboard at best, Lugosi (famous for making only $800 from this one!) has a field day and delivers one of his most memorable characterizations. His "hypnotic" eyes, used to famous effect in Tod Browning's Dracula, are once again utilized prominently here from the very first scene, but the other recurring images are far more compelling. The sequences involving the zombified Madeleine are particular visual highlights, and the eerie shots of the zombie mill workers prove exactly why black and white photography was invented in the first place. 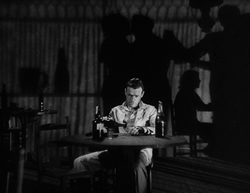 Rich with bizarre, beautiful imagery, White Zombie grabbed the attention of late night TV viewers for years despite its scrappy production and distribution history. Decent video editions were impossible to find for years (to to mention watchable film prints, almost all of which had ago deteriorated), but the Roan Group with the aid of Sinister Cinema managed to piece together the best extant materials back in the '90s to create a composite print released to great fan acclaim on laserdisc by the Roan Group. The same label's DVD from 1999 looks even better, with further dirt removal and scratch repair; likewise, the transfer contains deeper blacks and more minute detail, particularly valuable when studying the film's striking sets and matte paintings. While the laserdisc contained better packaging (including original press kit materials), the DVD boasts several new supplements. The most interesting, "Intimate Interviews," is a truly bizarre '30s promotional piece featuring a dimwitted blonde journalist asking Lugosi inane questions about his career in "mystery films," which she hasn't seen. Lugosi describes himself as a "lone wolf," explains his political asylum status to the blank-faced reporter, charmingly talks about picking up American slang terms like "okay" and "baloney" (the latter used in one of his most famous lines of dialogue in The Black Cat), and eventually scares her off by staring off into space and intoning, "I'm coming." Thoroughly 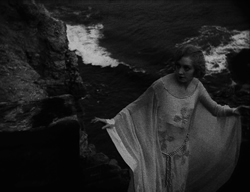 odd. Other bonuses include the 1951 sepia tone reissue trailer, a later '50s Lugosi TV interview, and a (very soft but worthwhile) running audio commentary by Gary Don Rhodes, who wrote a book about the film.

Flash forward to 2013, as White Zombie -- which hadn't had a new video transfer in fifteen years -- made the leap to Blu-Ray from Kino Lorber, with a DVD reissue to match. The obvious question is how to handle a film that could never really look truly pristine due to its production and release history; the solution they came up with is an interesting one and an option that would be welcome from other video companies in a similar situation. The packaging notes the film is "mastered in HD from a 35mm fine grain master," and it looks like the same 35mm source from the Roan version (including a handful of softer insert shots, but those are few and far between). What's interesting is that the Blu-Ray boasts two versions, with the main play option defaulting to a "digitally restored version" while the extras offer the "raw, unenhanced film transfer." 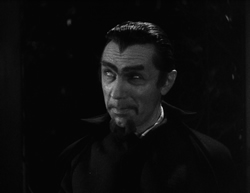 What this actually means is that the first version has been given a very thorough digital scrubbing, with all of the debris, scratches, and other signs of wear and tear completely removed along with the vast majority of the film grain. Most people know what that means; textures are very smooth and not particularly film-like, but it's super clean and rock steady. If you have a smaller display or don't mind the look of, say, the Dementia 13 Blu-Ray, this should be acceptable, but noise reduction phobics should definitely approach with caution. More interestingly, the audio has also been given a hefty digital overhaul with most of the rumbling, thumping, and other damage-related flaws buffed away. On the other hand, the raw transfer looks like pure film all the way, with no restoration work whatsoever. Yep, you have dirt and scuffs aplenty, but the contrast levels and details are actually pretty gorgeous; the close ups in particular pop with a clarity this film has never come close to enjoying on home video before. Personally I'd say go with this version since it looks much more like actual grain-filled 35mm (with much deeper blacks in the process) and feels like it has more of its soul intact, but fans may want to compare both and decide for themselves. Frame grabs here are taken from the raw transfer, but to give you an idea, look at this shot from the new digital overhaul compared to this one from the raw presentation. Audio on the raw version is likewise unrestored (both are LPCM mono), but it's still sharper and more pleasant with all its natural flaws than the more muffled version on the Roan disc, usually cited as its biggest shortcoming. As for extras, the trailer (minus sepia tone here) and Lugosi "Intimate Interviews" are carried over here in new HD transfers, while the commentary is replaced with a new one by film historian Frank Thompson. An obvious fan of the film, he covers its history in detail with notes on the cast, production locations (including fun facts about the Malibu location used for some shots of the climax intercut with others done on a soundstage), and influence on the horror genre, most obviously George Romero (and of course a certain Rob Zombie band). A stills gallery is also included. Definitely a must for horror and classic film fans, of course, and also a considerate approach to dealing with the challenge of presenting a vintage film under the harsh scrutiny of high definition in the 21st century.