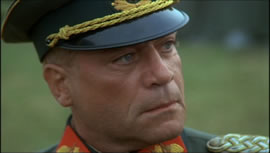 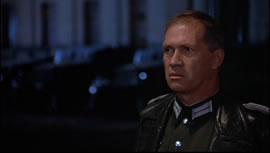 From the title you'd expect this to be a violent post-apocalyptic action film or a sequel to Maximum Overdrive, but in fact, Wheels of Terror is a strange, goofball war film mixing equal parts The Dirty Dozen, M*A*S*H, and Hogan's Heroes. The film came near the end of the feature film career for Gordon Hessler, who was coming off of a pair of insane Sho Kosugi action films but remains best known for The Golden Voyage of Sinbad and five bizarre AIP films including De Sade and Scream and Scream Again.

That trademark Hessler eccentricity is well in evidence here in this adaptation of the novel of the same name by Sven Hassel, a Danish writer who claimed to have served in the German Panzer regiment during World War II and used his experiences as the basis for a string of war novels. He even included himself as a character here, abeit a minor one, for the story of a motley crew of prisoners enlisted for a suicide tank mission to take out a convoy of tanks and then a Soviet locomotive providing necessary Allied fuel. The de facto leader of the group is Corporal Joseph Porta (Willard's Davison), who's joined by some eccentrics like a Muslim-converted kook called the Legionnaire (The Warriors' Kelly) and a dimwit named Tiny (Sanders).

Episodic and mostly anarchic in tone, this film ups the ante for adult content compared to previous classic war films with heavy doses of frat boy-style humor and even a surprising dose of frontal nudity when the boys run across a bunch of skinny-dipping deserters. It doesn't all gel but the enterprise is definitely fascinating, especially when reliable pros David Carradine and Oliver Reed pop up for what amount to glorified cameos as commanding officers. The entire cast is solid with good supporting turns by pros like Lisa's D.W. Moffett and Jay O. Sanders, while Hessler manages to stretch what appears to be a meager British-Danish budget (it was shot in Yugoslavia) much further than it probably should have gone. 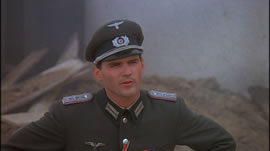 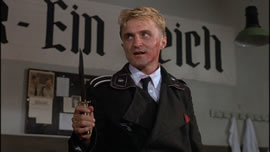 Apart from some token one-off screenings for film markets, this film essentially went straight to video in the United States courtesy of Trans World Entertainment as The Misfit Brigade. Their library eventually passed over to MGM, who has been very slow to get much of the TWE library out of the gate apart from a tiny handful of horror titles despite the existence of HD masters for many of them. Unfortunately this title wasn't one of the lucky HD few, so a non-anamorphic letterboxed master dating back several years is all that was available for Scorpion's 2015 DVD release. (The earlier European releases appear to be from the same source, with the Swedish one simply blowing it up to simulated 16x9). It looks okay for what it is, but one can always hold out hope that someday the studio will pull out whatever elements they have and give it another pass. The English mono sounds fine for what's always been a pretty thin sound mix.

As usual, the disc comes with a batch of bonus Scorpion trailers (none for the main feature) including Firepower, Hollywood Blvd., Nashville Girl, Killer Fish, The Octagon, and The Last Days of Chez Nous. More substantially, there are three featurettes, starting off with a 17-minute chat with Davison who does a killer Hessler imitation and chats about his baffled response to the film, which has since mellowed considerably, as well as his recollections of his cast mates including the "scary, in a good way" Kelly. Speaking of whom, Kelly turns up next for an interesting 16-minute interview about prepping for his role, his professional debt to mentor Walter Hill, and his fondness for war films. Finally, actor Keith Szarabajka gets the longest featurette (30 mins.) as he goes into his career as a very busy character actor and anecdotes about macrobiotic food on the set and oddball set behavior by Carradine and Reed involving a riding crop, genital tattoos, and an attempted throat slashing. Needless to say, this one's worth the price of the disc by itself.