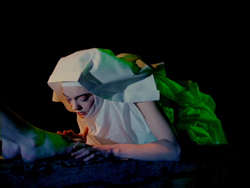 Few people have done more (or bled more) for the cause of nunsploitation cinema than Nigel Wingrove, the filmmaker and head of Redemption Films who helped kick off the Eurocult craze both in the UK and abroad with a host of Italian and French erotic outrages from the '70s and '80s. His penchant for transgressive erotica is also a huge component of his directorial work, which comprises one feature-length film and a handful of shorts (as well as the Satanic Sluts series, but that's another subject entirely). His second short film, "Visions of Ecstasy," understandably headlines this collection thanks to its visual quality and its historical status as a long-standing thorn in the side of the BBFC, who refused a certification for it on the grounds of blasphemy for over two decades. Does the film itself live up to the scandalous hype? Let's find out...

As art buffs may have already guessed, the "ecstasy" of the title refers to the famous visions of St. Teresa of Avila, a Spanish nun who famously found a "perfect union with God" after experiencing intense religious visions and believed on different occasions that she had witnessed the appearance of Jesus Christ and had an angel-driven lance through her heart. The obvious sensual components of her experiences have fueled numerous paintings and sculptures, though none really tread into the same territory as this film. Here Teresa (Downie) subjugates herself in a dark area of worship to a string of hysterical fantasies in which she's trussed up, removed of parts of her habit, entangled carnally with another nun, and most scandalously, intimately familiar with the wounded body of Christ on the cross. Considering the opening moments feature Teresa inflicting stigmata upon herself in bloody detail, this obviously isn't a film you'd want to spring on your grandmother for family movie night. It's a stylish art film through and through, the sort of thing that has people pointing their fingers and screaming "Pretentious!" and others yelling "Sacrilegious!" Of

course, after years of post-Madonna music videos and even Ken Russell's Lair of the White Worm from the previous year (which has more than its share of nun nastiness), it's inevitable that some of the bite might have gone out by now. Fortunately the film has more than its share of visual delights including wild candy-colored lighting and a spooky ambient sound mix (courtesy of music by Steven Severin from Siouxs

ie and the Banshees), so it's a very solid place to start. Of course, the aesthetic here eventually morphed into the notorious shot-on-video Redemption intros featuring Eileen Daly, which are much less effective because (a) they weren't shot on film, and (b) there's dialogue.

Next up is Wingrove's first film, "Axel," a seven-minute short from 1988. Featuring a soundtrack by '80s alternative goddess Danielle Dax, it's a plotless, wordless affair with a naked young woman adorned with a gold bird mask and led through a labyrinth where she has a close encounter with an angel. Like the main film, it's beautifully shot and feels similar to something by Derek Jarman thanks to its deep shadows and rich blues. The much more vibrant "Faustine" from 1990 is basically a poem by Algernon Charles Swinburne on film delivered by Eileen Daly, complete with lots of pagan-style foliage and erotic imagery. Then there's the only feature film of the set, 2000's Sacred Flesh (72 mins.), which has been around on DVD at least since the mid-2000s from various labels like Heretic and Redemption. Presented in 1.78:1 anamorphic widescreen, it was shot on video and doesn't really have the rich visual sheen of the earlier films. On top of that it's chock full of dialogue, which varies wildly depending on the abilities of the actresses delivering it. That said, it's a wild modern stab at nunsploitation with plenty of surrealism to elevate the familiar story of a Mother Superior, Sister Elizabeth (Sally Tremaine), whose own carnal desires and accusations of inappropriate behavior among her sisters provo

kes an investigation into her potential possession by the devil. Soon she's experiencing intense visions which bring all of her religious training into doubt and the residents at the Church of the Sacred Heart into sexual turmoil. A bit smarter and more philosophical than one mig 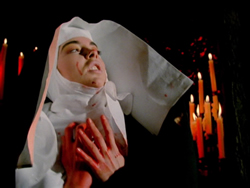 ht expect given the softcore trappings, it still piles on the gropings and bare flesh enough to satisfy casual drive-in fanatics. However, the tacky and wildly anachronistic breast implants are a bit distracting. The old Heretic disc sported a full Wingrove commentary and a few minor exclusive extras (a soundtrack promo, trailers, etc.), so completists might still want to hang on to that one.

However, in every other respect the Kino Lorber reissue (which bears the Redemption and Salvation logos on the back but not the cover, oddly enough) piles on far more valuable goodies in addition to the four Wingrove-directed titles. You get a batch of outtakes from "Visions of Ecstasy" (basically longer and alternate takes, running almost as long as the film itself), a 1990 video interview with Wingrove (who talks about his unintentional courting of controversy and his attitudes about the hypocritical nature of film censorship, particularly in the UK), and the 24-minute "Hail Mary! A Brief Peek at Nunsploitation" from 2009, produced for the second DVD of Sacred Flesh. Essentially it's a tour through the subgenre's odd history with Wingrove talking about its origins and conventions, complete with plenty of relevant clips from the Redemption library (including, of course, a dash of Jess Franco). Finally the disc contains a DVD-Rom essay called "Finding Ecstasy on the Road to Redemption," an illustrated recap of the legal battle over "Visions of Ecstasy" which found Wingrove going to court at great personal cost to overturn the BBFC's ruling. It's a fascinating story and would actually make for an interesting short film of its own someday. In the meantime we have this potent collection, a gaudy and outrageous time capsule of an English nunsploitation revival that could still put your immortal soul in peril.