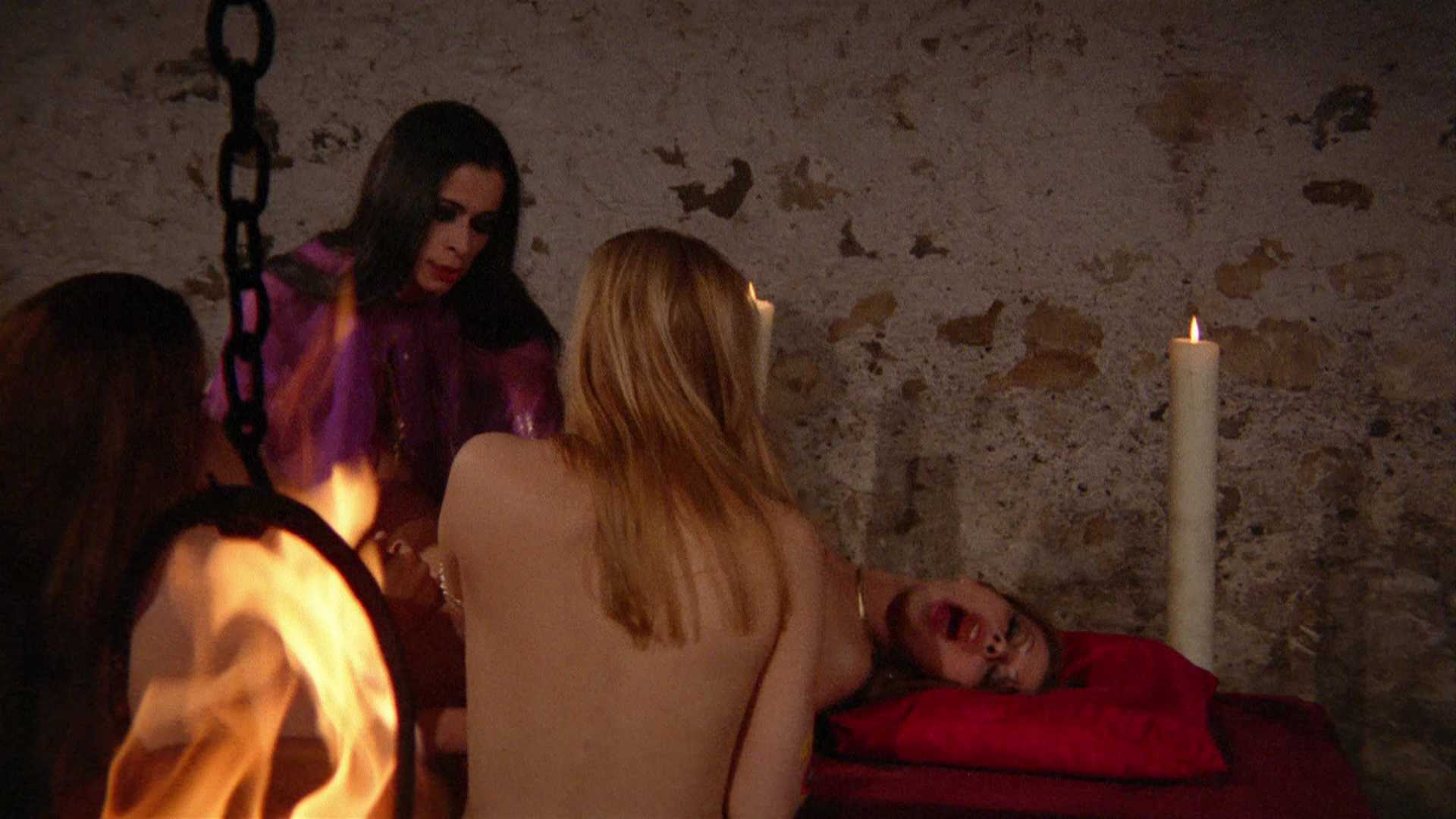 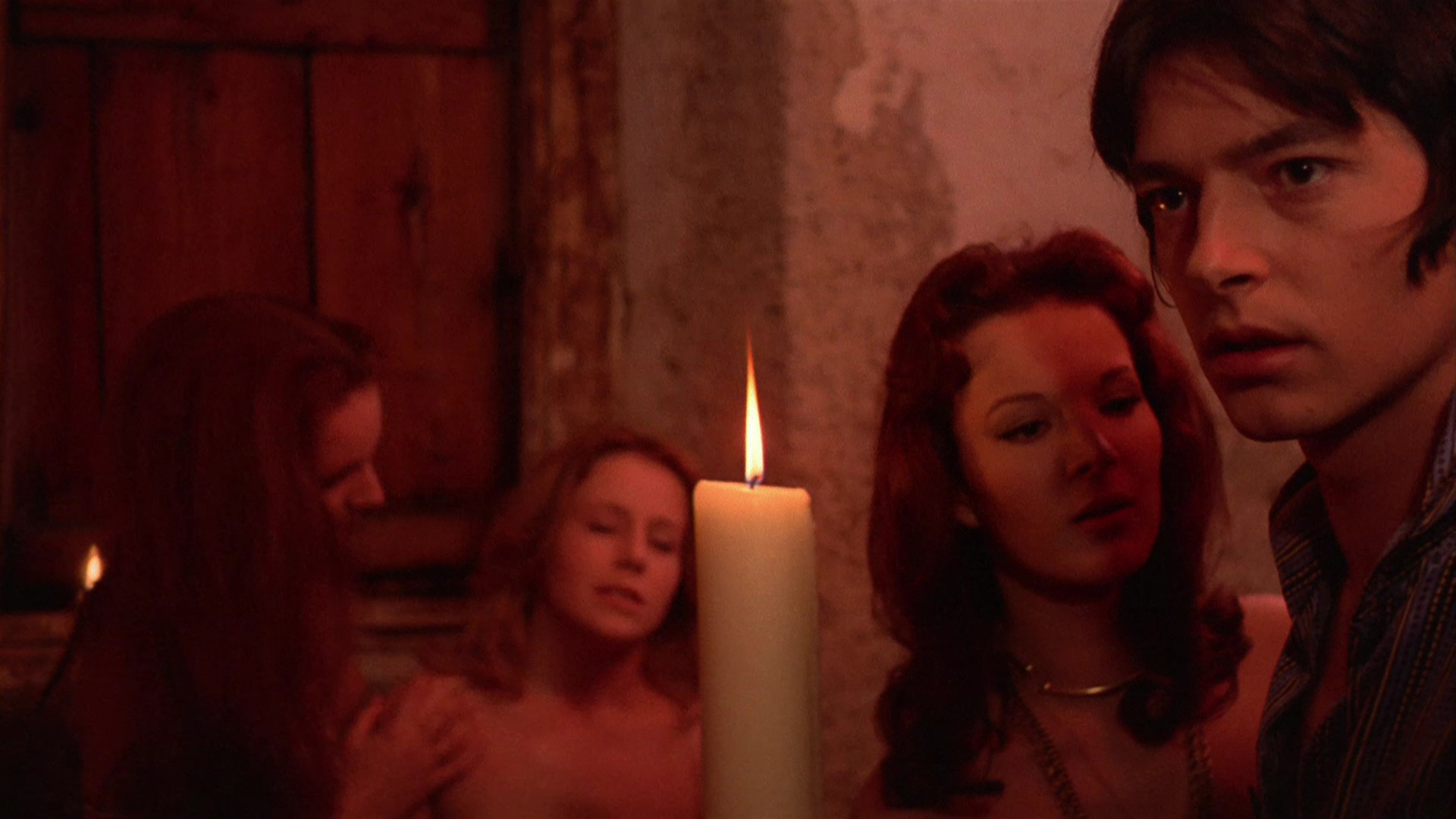 Two supernatural films from Joe Sarno, one of the most enduring names in softcore American and European cinema, collide for the first time in a Blu-ray release that marks the first in an onging series of the filmmaker's major works in glorious high definition.

First up is Vampire Ecstasy, first released in most theaters under the more evocative title of Veil of Blood and also issued on DVD as The Devil's Plaything. In a remote German forest, strange deeds are afoot at the mysterious Castle Varga where women have a tendency to drop their clothes and perform odd rituals in the dead of night. As it turns out, a horde of new arrivals including three female members of the Varga family will play a key role in the plans of severe housekeeper Mrs. Krock (Henkowa) to bring her vampire lesbian mistress, Countess Varga, back from the grave and into one of her heirs after being burned at the stake many years before. All the women take turns having sex with each other, and occasionally male cast member Nico Wolf (aka soft and hardcore actor Nico Wolferstetter) gets thrown into the mix as well as a parapsychologist visiting with his sexy sister (Butz). 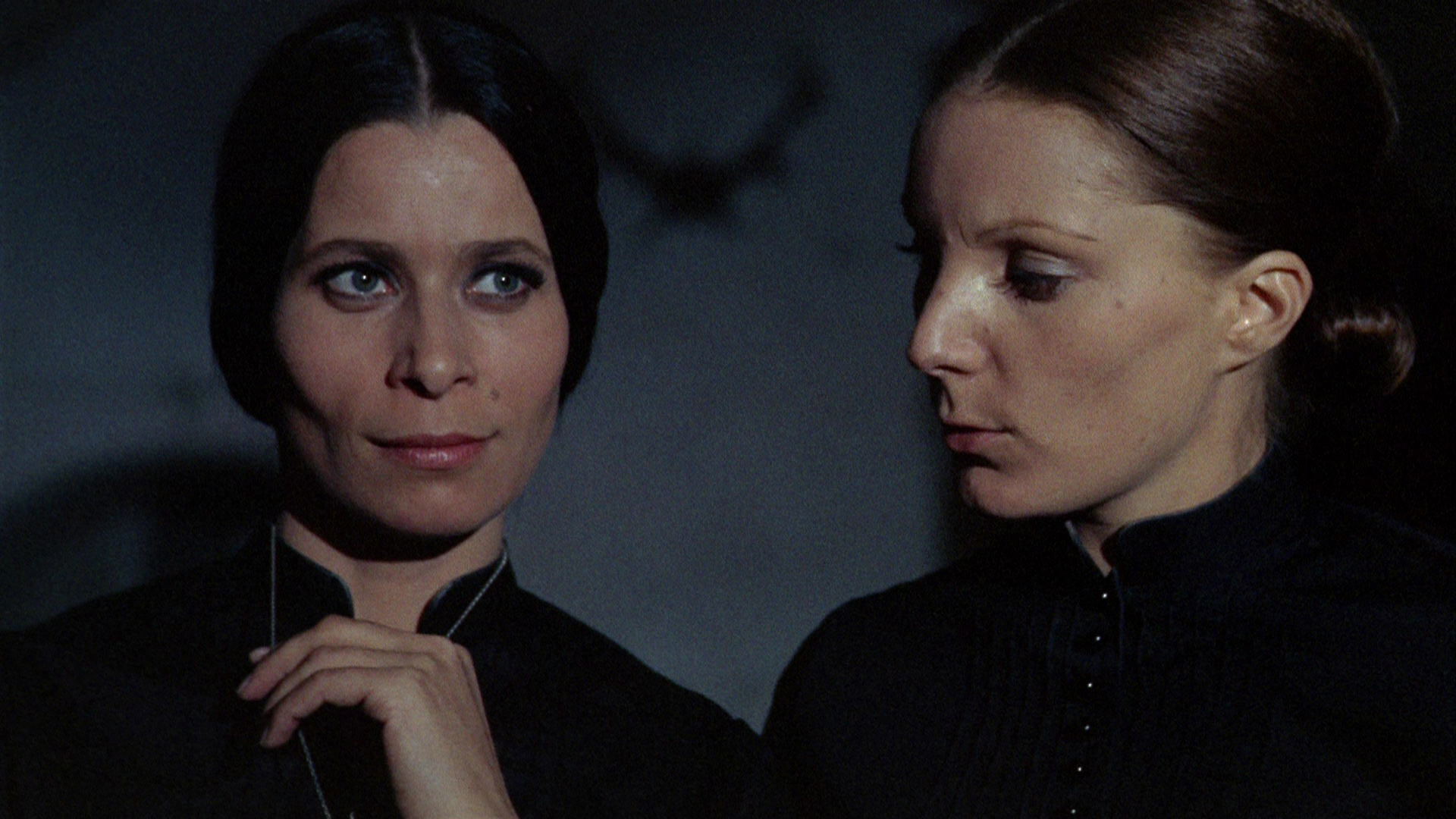 and gun-for-hire assignments, all of which can be found here in varying degrees. Sarno was brought aboard by producer Christian Nebe (The Naked Cage), who had distributed Sarno's Sin in the Suburbs and wanted a straight-up horror film, and Sarno delivered about as much as his sensibility would permit. The end result feels a lot like a Jean Rollin film, not surprisingly, with the red-lit imagery of naked women cavorting in a crumbling castle calling to mind the glory days of Shiver of the Vampires and its companion features. The kink content is fairly high with S&M 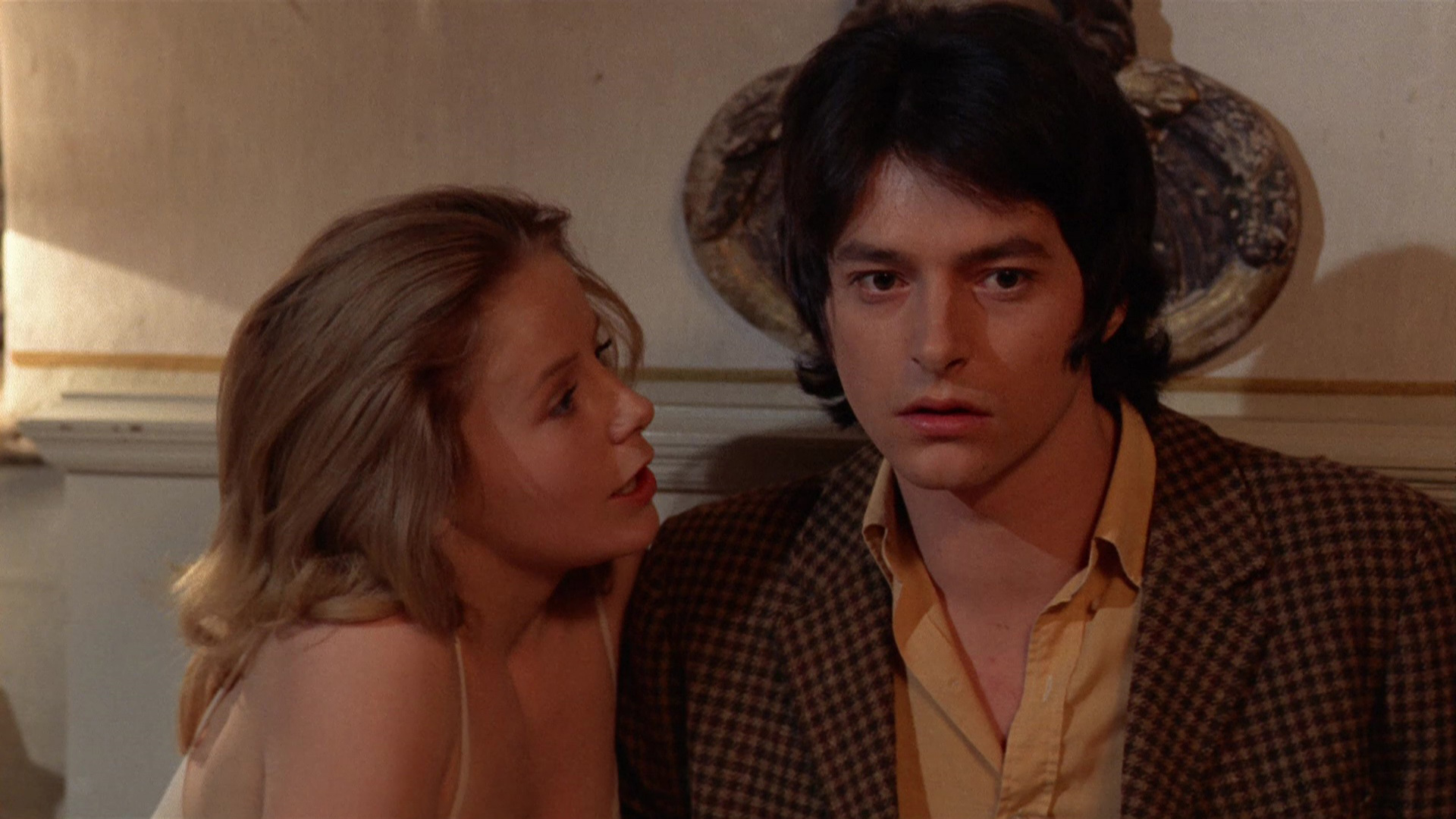 overtones (primarily thanks to Henkowa), monster sex toys, and lesbian orgies galore, but the tone of the film is definitely Sarno all the way with a slow, hypnotic tempo that will probably irritate anyone expecting a traditional horror film. In terms of Sarno's output it's most significant as the first collaboration with newcomer Marie Forså, who would function as Sarno's muse in Bibi (retitled Girl Meets Girl for DVD) and their best (and most explicit) film together, Butterflies. She doesn't get to cut loose here as much as her later films (which also include the notable X-rated titles Flossie, Molly, and Bel Ami), but it's easy to see why the director would take a shine to her.

This film made its American DVD bow in 2005 in one of the more baffling releases from e-i/PopCinema/Retro-Seduction Cinema, an anamorphic widescreen presentation under the title The Devil's Plaything in a 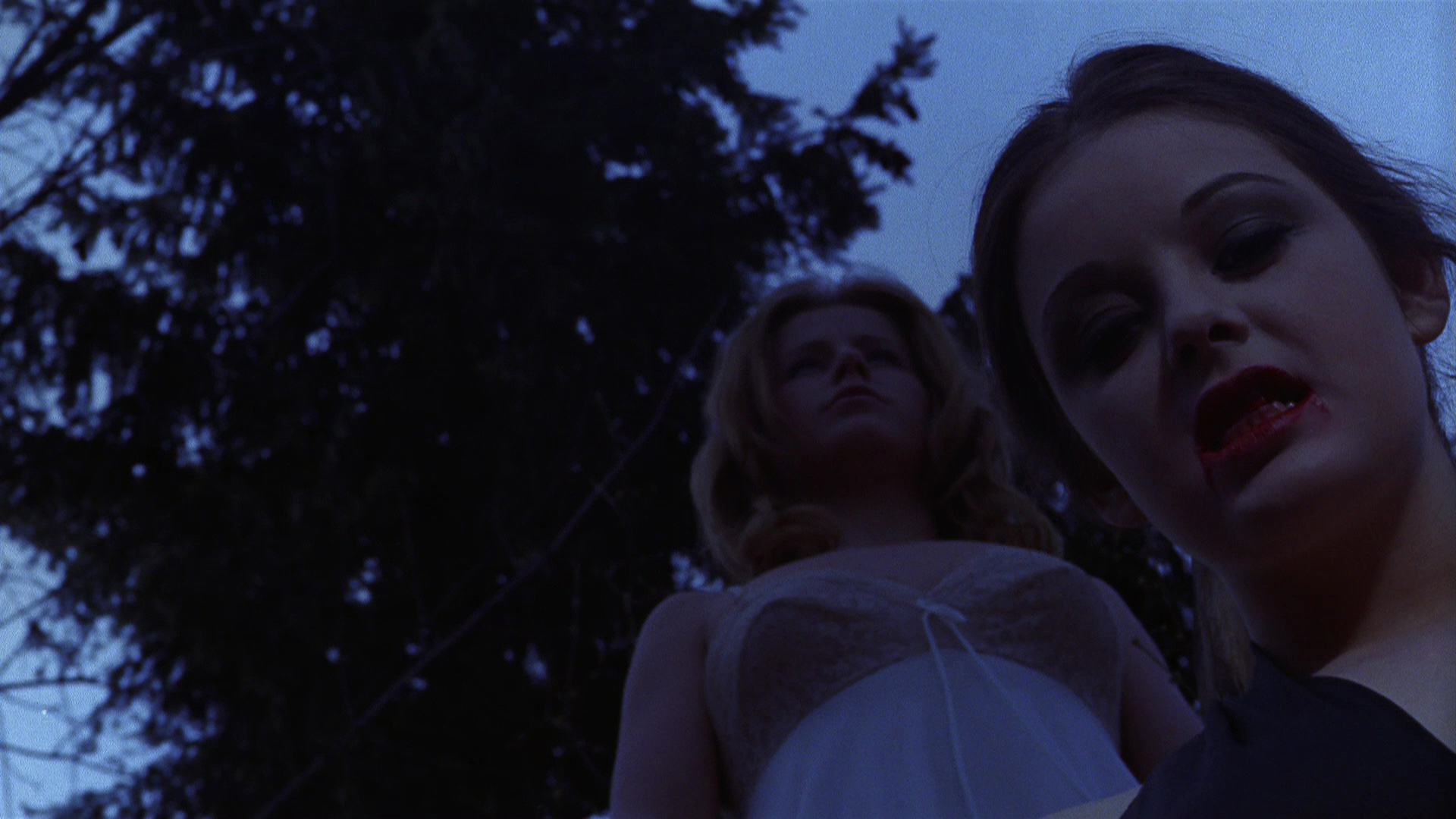 drastically edited version sporting an R rating. (The film isn't explicit at all, but the screen time spent on bare breasts and butts is extensive.) A voucher was included to send off for the complete 103-minute version if you were so inclined on DVD, which makes one wonder why they didn't just include that in the first place since this was never going to be a big hit at Blockbuster. The only relevant extra is the six-minute "Joe Sarno - A Touch of Horror," an interview with the late director about how this peculiar international hodgepodge came about and why he was more focused on creating a sense of horror through "unease" rather than killing people off. The company later repackaged the film as part of a 2012 Sarno "Girl Meets Girl" set with the other Marie Forså titles, featuring an uncut but pretty awful fullscreen transfer and two completely different extras. A 7-minute interview with Sarno and Noble (shot separately) goes into more detail about the pivotal Bavarian castle (which belonged to Noble's uncle) and the primarily German casting with actors who hadn't done nudity before, now faced with "strange and exciting demands." The big new extra here is an audio commentary with Nebe (moderated by an uncredited Tony Marsiglia), who talks about more alternate titles (Curse of the Black Sisters) and misidentifies a couple of them, reveals the entire cast was knocking boots every night after shooting, and remembers the discovery of "natural nymph" Forså and the other cast members who had to speak English, more or less. It's a fun, very wild chat that manages to fill the entire film with ease. The first DVD version was essentially repackaged for a variety of international releases, albeit featuring the longer cut. 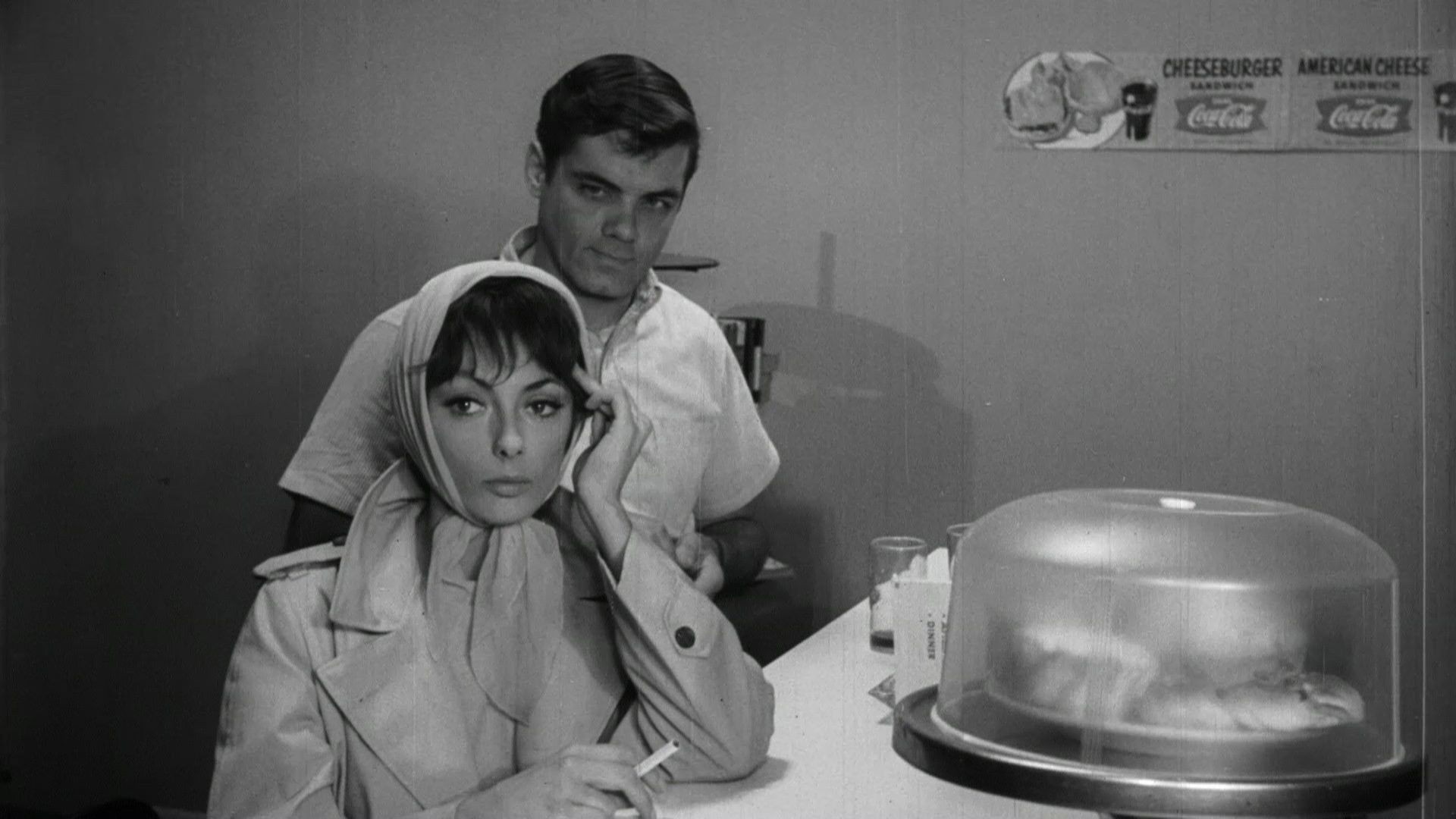 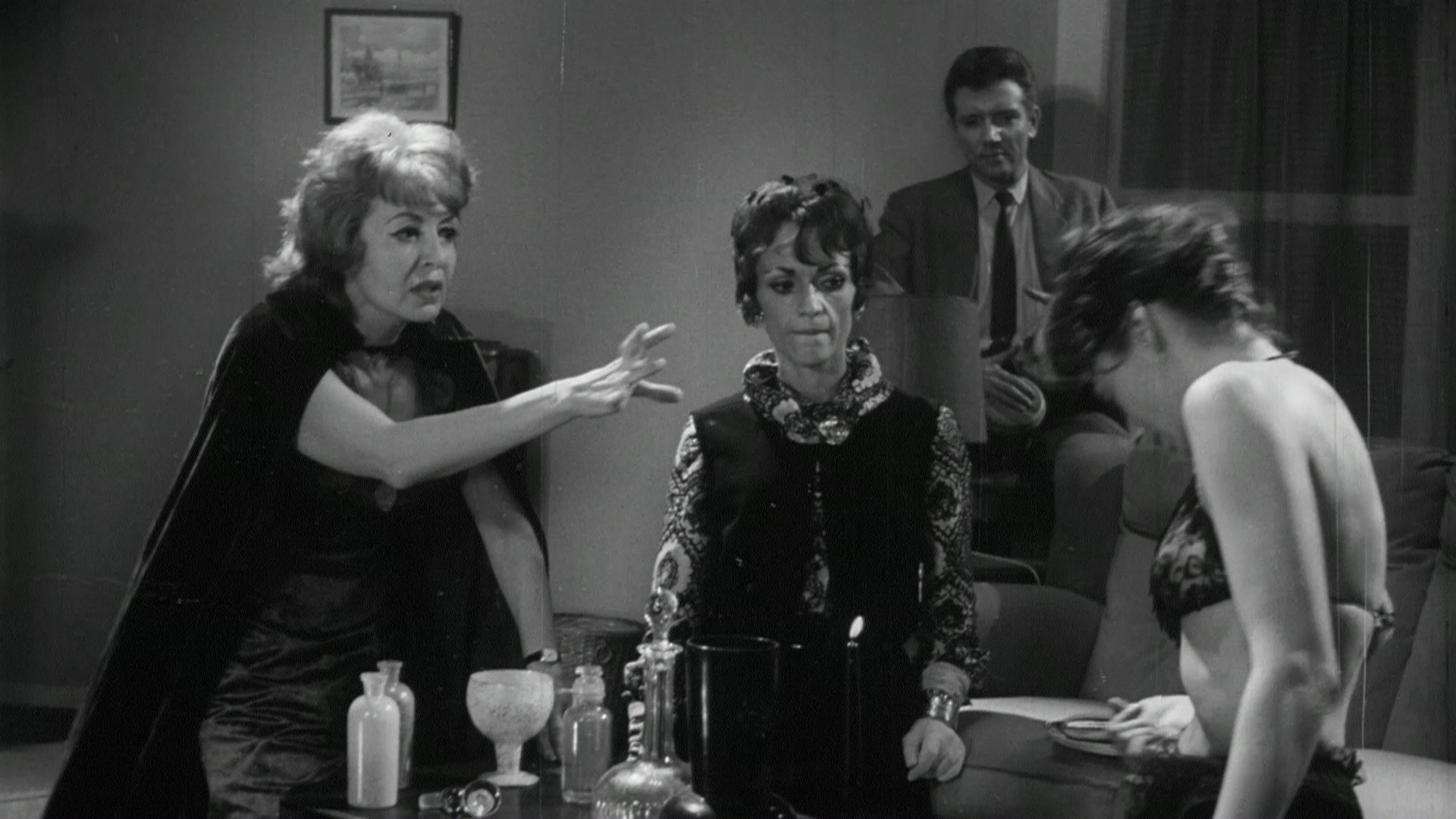 A decade earlier, Sarno had tried combining the uncanny and the sexy with the much seedier black-and-white offering, Sin You Sinners (a riff on the title of a 1938 musical, Sing You Sinners). Opening with the least erotic burlesque performance ever put on film, it's credited to one-off Anthony Farrar but definitely bears the Sarno stamp in what amounts to a three-hander between stripper Bobbi (Colbourne), daughter Julie (Lloyd), and lover Dave (Murcott), all of whom are thrown into turmoil by a magical amulet Bobbi brings back from a voodoo-soaked trip to Haiti. Julie's less than thrilled with her mom's tail-shaking stage performances, but the amulet has the power to force Bobbi's will on those around her (including keeping the much younger Dave under her spell) and take advantage of their weaknesses - even if it leads to murder. Dark and perverse, this one leaves its nastiest implications to your imagination (there's no bona fide nudity, but you'll barely notice), and it sets up the psychodrama skills that Sarno would later turn into an art form for the remainder of the decade.

Surviving today only via one battered print, Sin You Sinners popped up on VHS from Something Weird (who later ported it over to DVD-R and digital download) and a pretty shoddy bargain bin release from Alpha Video (paired up with Dance Hall Racket), later repurposed as part of their Blonde in Bondage disc set. The fact that it exists at all is pretty miraculous given its orphaned status and minimal distribution, making it an odd and valuable chapter in the history of a truly unique movie talent. 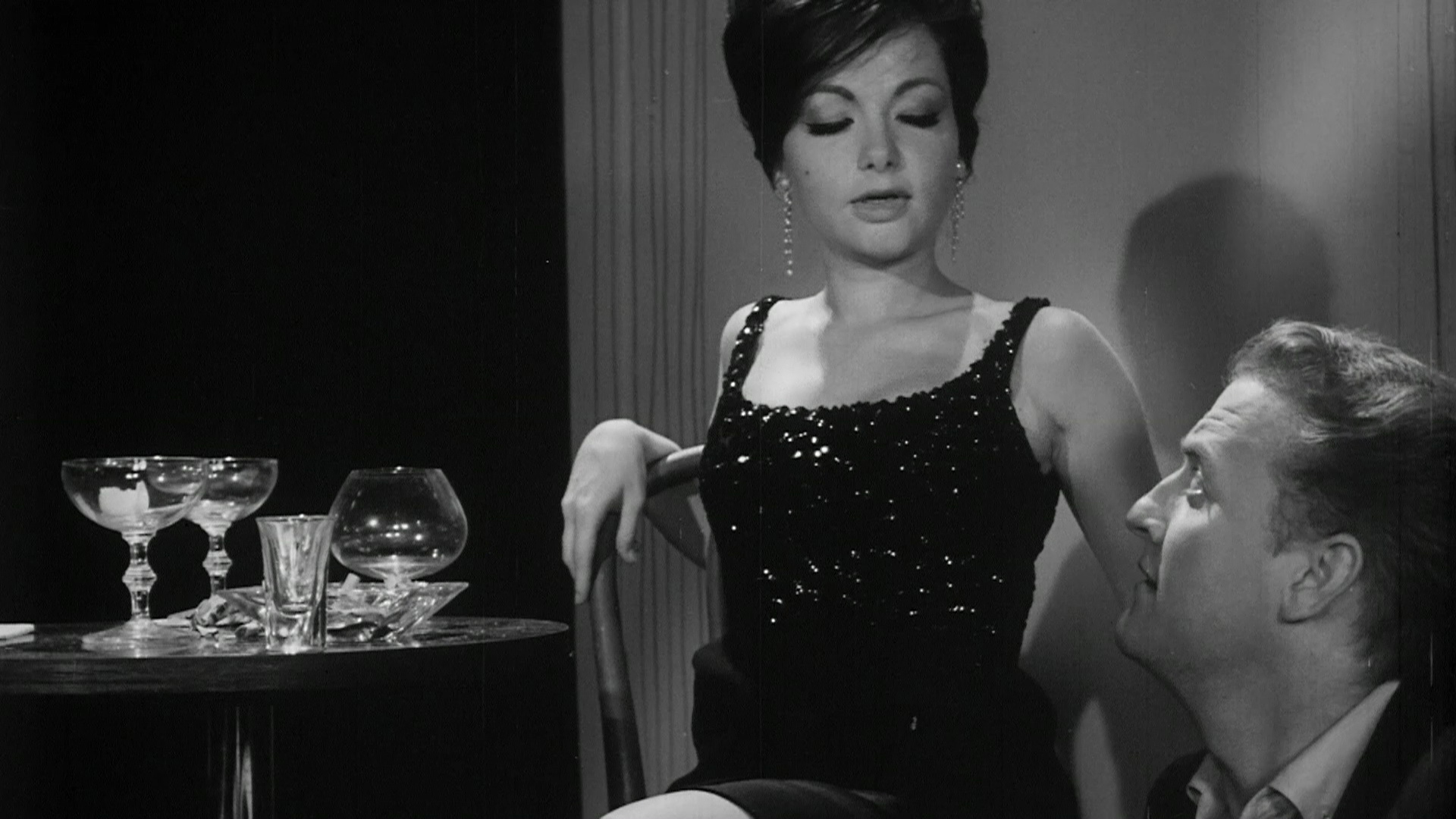 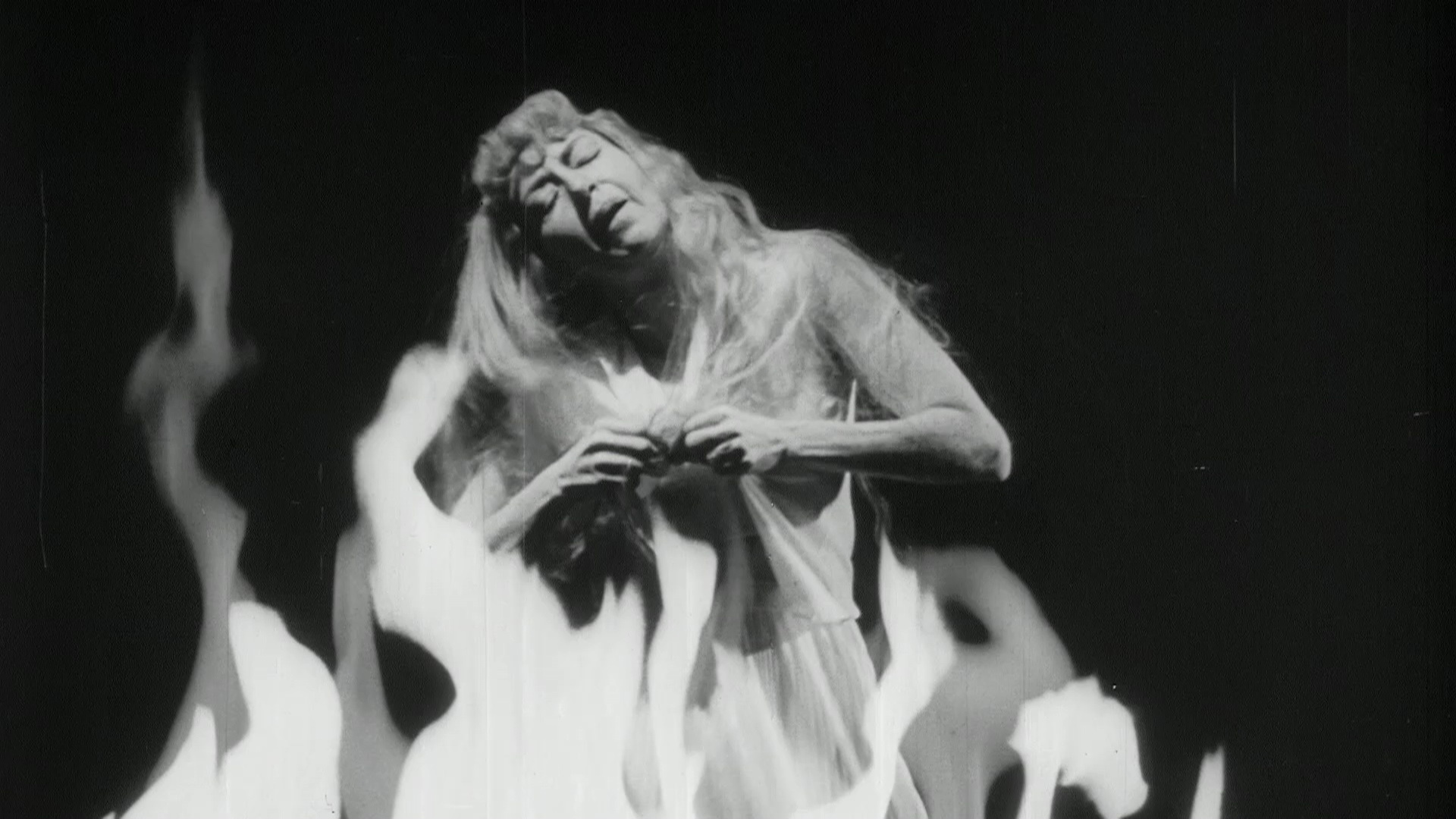 Both Sarno films are given their best release to date courtesy of the 2016 Blu-ray, the first in a "Joe Sarno Retrospect" line from FilmMedia distributed through Film Movement. Vampire Ecstasy looks very impressive, especially given its modest prior incarnations, with its vibrant, colorful lighting making the Rollin similarities even stronger than before. Film grain appears to be intact and unmolested, though the film often has a slightly soft and filtered look that appears to be part of the original design. Sin You Sinners is of course limited by the surviving source, which is very clear with great black levels but suffers from splices and hairline scratches; it's great to have it at all, especially in a brand new transfer that's likely as good as it can ever look. Both films have lossy Dolby Digital English mono soundtracks, which is passable given the limited nature of the original sound mixes here-- but it would be nice if future volumes would go lossless. Every pertinent extra from past releases is carried over: the Sarno featurette, the Sarno/Nebe interview, a 1998 video-edited trailer for Vampire Ecstasy in its VHS days, and a DVD-era video trailer for Sin You Sinners created for Retro-Seduction Cinema, plus a German Vampire Ecstasy for good measure. The package also comes with liner notes by Video Watchdog's Tim Lucas, who lays the groundwork for Sarno's entry into filmmaking and covers the genesis of both films as well as their similarities, particularly the pivotal use of medallions. Bring on volume two!