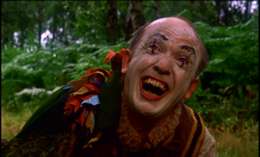 Made during the final decade of Hammer Films' theatrical existence, Vampire Circus arrived as the studio was becoming increasingly experimental with its bloodsucker outings in between the usual Dracula offerings from Christopher Lee and company. Sexed-up fare like The Vampire Lovers proved Hammer was willing to amp up its adult content to compete with the more extreme fare pouring out of countries like Italy and France, but few could have anticipated the severity of this particular film, one of the most graphic and engaging titles from its final phase.

In the small town of Schtettel, a young girl is lured away from her grandfather in the woods by a comely lass (Blythe) who hands the kid over as a vampiric chew toy for her master, the vampiric Count Mitterhaus (Tayman). Soon a group of torch-wielding villagers attacks the castle, laying waste to the surviving inhabitants only to be placed under a curse by the dying Count. Fifteen years later, a mysterious circus arrives in town with an equally perplexing plague right behind it that forces everyone into a militant quarantine. The circus, apparently spearheaded by a sinister gypsy (A Clockwork Orange's Corri) and panther-like Emil (Flavia the Heretic's Corlan, aka Anthony Higgins from The Draughtsman's Contract), features fantastic performances (many definitely not safe for younger viewers) involving shapeshifting acrobats who transform into bats, a naked dancer covered in stripes, and, of course, a very sinister midget (Masque of the Red Death's Martin). Soon the town elders realize their children have been targeted by this diabolical clan, with young teens Anton (The House that Screamed's Moulder-Brown) and Dora (Schizo's Frederick) as the ultimate targets. 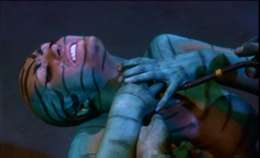 Delightfully smashing taboos right from the opening scene, Vampire Circus features a now-legendary opening 12-minute, precredit sequence that still stands as the most powerful, barnstorming curtain raiser in the company's history. You'd think this mini-epic of vampire mayhem would be impossible to top for sheer peversity and gut impact, but non-Hammer director Robert Young (who sadly never dabbled in theatrical horror again) manages to lace the film with plenty of powerful, visually striking set pieces, many skillfully using mirrors, light, and old-fashioned optical tricks to turn the film itself into a sort of fantastic circus itself. While Tayman (who followed this up with his best role as Mark E. Desade in House of Whipcord) is hilariously underused considering his iconic status in the film's ads, the rest of the cast does very well with their unusual, unpredictable roles; all of the circus performers in particular get their turn in the spotlight, with Horror of Frankenstein's David Prowse (before he became Darth Vader) even popping up as a mute strongman. Also noteworthy is the thunderous music score by David Whitaker, a rarely used composer who also did music duties on Scream and Scream Again and, most famously, The Sword and the Sorcerer.

Though it was released uncut theatrically in the UK after a much-publicized showdown with the BBFC, Vampire Circus was, incredibly enough, hacked down for a PG rating in America by 20th Century-Fox; not surprisingly, the film's reputation suffered considerably as a result given that the final product was completely incoherent and missing all of its shock value. The uncut version finally surfaced on video and became a gray market favorite, first from a Japanese source and then via an American laserdisc through Hallmark and Image that was swifly yanked off the market and became a hot collector's item. Eventually an amamorphic DVD popped up in the UK from Carlton, initially as part of a three-film box set and then on its own; other international releases followed, though all were notably inferior (especially the cruddy, full frame Japanese DVD). Petitions mounted for years to get MGM to release the film when they licensed it from Rank, and while an HD master did make the rounds on their MGM HD channel, a home video release seemed to be the last thing on their minds. 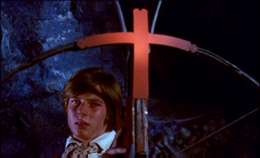 Enter Synapse Films, who snagged the rights to this much-requested title along with a couple of other goodies as part of their Hammer Collection line. This one was chosen as their inaugural Blu-Ray title, packaged as a combo pack along with the DVD (which features identical bonus features). The HD transfer opens with the MGM logo and appears to be taken from the same source used for HD broadcast, though this time it's 1080p and appears to have undergone some additional color correction and black level balancing. Most significantly, this marks the first anamorphic transfer in the correct aspect ratio, as the British disc sliced a bit off the top and bottom while the full frame versions lost information on the sides. The opening sequence and some of the later night scenes tend to look a bit murky given the heavy filtering used to simulate a twilight appearance, but after you get past the main credits, it's largely smooth sailing with vivid colors and a nice, film-like appearance with a little bit of natural grain where it should be. The DTS-HD audio is also substantially stronger than previous versions, which is especially obvious during the prologue and Serena's famous bare dance scene. An optional DTS-HD music and effects track is also included. (The DVD features both audio options in standard Dolby Digital.) Incidentally, this also marks the first Hammer Blu-Ray ever in America, and only the second one in the world (after the UK's excellent Paranoiac release from Eureka).

As for extras, the biggie here is the half-hour "Bloodiest Show on Earth: The Making of Vampire Circus," an entertaining featurette that manages to pull a surprisingly heavy amount of information together given the difficulty of getting participants together for later Hammer titles. Five interview subjects cover the history of the film, with Flesh and Blood Hammer doc maker and expert Ted Newsom kicking things off, followed by director Joe Dante, Video Watchdog's Tim Lucas, writer Philip Nutman, and actor Prowse. The featurette is broken down into categories ranging from Hammer's status at the time to scheduling problems to censorship hassles, and everyone gets in several good points about one of Hammer's most unique cult items. (Interestingly, no mention is made of its closest Hammer cousin, the later Captain Kronos: Vampire Hunter.) Apart from the annoyingly repetitive calliope music interstitials, it's a great piece and an excellent companion to the main feature. Nutman returns again for the 15-minute "Gallery of Grotesqueries: A Brief History of Circus Horrors," which illustrates this peculiar subgenre by covering everything from The Cabinet of Dr. Caligari and Freaks to, uh, Carnival of Blood. Then it's Nutman time again for the 9-minute "Visiting the House of Hammer: Britain's Legendary Horror Magazine," which covers the short but interesting heritage of the studio's comic book and magazine arm, which is followed appropriately by an animated motion version of the Vampire Circus comic book (basically the prologue). An animated still and poster gallery and the original UK trailer round out the package, with all extras presented in HD (which is pretty breathtaking when you see some of the razor sharp poster art). Hammer fans, this one has definitely been worth the wait.

[Note: screen captures above are standard def only at the moment; HD caps coming shortly.]